You can’t express the love of a mother for her child. See how the filmmaker Jacob Frey represented this unconditional bond through a story. Watch the video here. 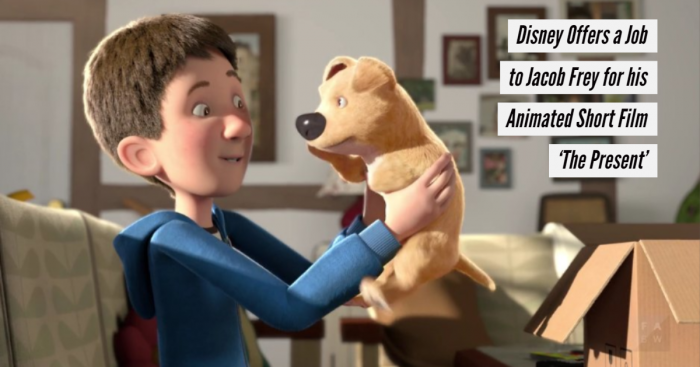 How will you react if you get a job offer from your dream company? I will fall short of words. The same thing happened when the filmmaker Jacob Frey got an opportunity to work with his dream company Disney.

The three-minute film, ‘The Present’ by an award-winning director Jacob Frey is worth watching. This short animated film has won over 75 awards in several film festivals in Italy, Portugal, Canada, and has received a great response from the audience.

The Present is co-written by Jacob Frey and Markus Kranzler and directed by Jacob Frey. The story is based on a comic strip, "Perfeição” by Fabio Coala.

The Plot of The Short Movie - The Present

The story revolves around the young boy who doesn’t help his mother in the household chores and plays video games day and night. But he was surprised when his mother gifts him a box, saying it has a present for him.

As she goes upstairs to receive a phone call, the boy opens his gift and found a cute puppy as his surprise. But when he sees the puppy is injured and doesn’t have one leg, he becomes angry and kicks him away. He continues with his video game and avoids the dog.

The puppy finds a ball under the cabinet and invites the boy to play. The boy ignores him again, but the dog continues to disturb him for playing. After a few minutes, he swoons over his spirit and stops playing his game. He then walks out to play with the dog, revealing that he doesn’t have one leg and walks with crutches.

The film was screened at over 250 screens and garnered positive views from the movie lovers.

Jacob Has Also Worked as an Animator in Several Popular Movies

"Having spent ten months at Psyop I've learned a lot of things about animation and I am really thankful for not having been treated as an intern, instead of as a proper animator.
After finishing "The Present" and graduating from Filmakademie, I went to Walt Disney Animation Studios to take part in their Talent Development Program.
There I worked as an animator on the feature animated film "Zootopia"."

The short film went viral with millions of views across the globe.

The video features excellent graphics and shows emotions. This beautiful story about a mother presenting a surprise to his handicapped son brings a smile on everyone’s face. They created this movie in 2014 when they were graduating from Filmakademie Baden-Wuerttemberg in Ludwigsburg, Germany.

Jacob now works at Disney and Kranzler at Pixar Animation Studios in San Francisco. Jacob, as an animator, also has credits to film like Moana, Zootopia, and The Secret Life of Pets. Additionally, he also worked as a character animator for Magic Light Pictures and Oscar-nominated Room on the Broom. Kranzler worked for the film The Good Dinosaur that released in 2015.

Look at the details present in the movie, right from his hair to the dog’s fur. The movie features attractive graphics and everything that the audience expects from the popular animated movies.

If you are an animated movie freak, you should also know about these worst animated movies of all time. The movies are worst but can be watched at least once to enjoy the characters.

The film The Present starts with a typical day in the life of a teenager, who is a video game addict and doesn’t want to see life outside the door. Everything changes in his life after he receives a gift from his mother.

Do you have other ideas about how you can distract kids from playing a video game? Did you like this movie? I find this movie inspirational and emotional at the same time. Just like Jacob, if you also follow your passion and do hard work. If you are lucky, you can also get an opportunity to work with your dream company!

Have you ever watched a movie like this that represented the bond between mother and son this way? If yes, which was it? Drop your comment below.