You are probably wrong if you think that the court is only meant to solve serious crime cases and household issues. Do you know the courtroom also handles the case filed against the wrong weather prediction? 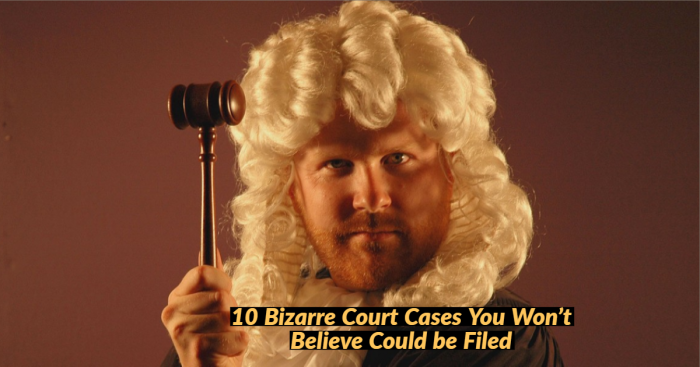 What comes first in your mind when someone speaks about a courtroom? A place where unfortunate issues are trying to get solved, some serious talks happening, and the victims praying not to be proved guilty.

If you are considering to become a lawyer, be prepared to handle strange and weird cases because there are people who file cases for nonsense reasons and get a chance to make headlines. You might get a case where a man filed a complaint against a dry cleaning company for losing his trousers. Yes, this is a true incident that happened in the U.S in 2005. He demanded $1000 to cover the cost of his trousers that the dry-clean owners refused to pay. What happened next would make you think a lawyers' job is not so easy.

Read a few bizarre court cases recorded in history that would not only make you laugh but make you think why this didn’t happen with you. 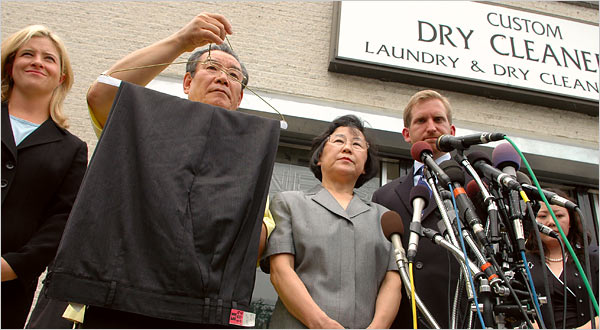 What would you do if your favorite trousers are lost by dry cleaning company? I will be upset as it was my favorite pants, but maybe I will buy a new one and would not give other dry cleaning dresses to the same company.

But can you imagine a person filing a complaint of lost trousers and demanding over $1000 as compensation? This is the case of Roy L Pearson, who filed the complaint against Jin Nam Chung, Soo Chung, and Ki Y Chung - the owners of Custom Cleaners in Washington D.C.

Pearson filed a case against them based on the company’s signs “Same Day Service and Satisfaction Guaranteed” were false. The judge supported Chungs, but could not reject the claim as some facts were in dispute. The owners offered him $3000, $4600, and $12000 as compensation for his lost pants, but he denied. After the case was filed, the Chungs received support from the public, and a website was set up to accept donations for this legal defense.

He initially demanded $67 million for the loss of his pair of pants. Later, he reduced his demands to $54 million. His requests were $2million for inconvenience and discomfort, $500,000 attorney’s fees, and $15,000 to rent a car to drive another dry cleaning company. The remaining amount to help dissatisfied consumer sue business. He lost the case after he failed to prove that the pants he got were not his.

On July 24, 2007, the Institute for Legal Reform of the US Chamber of Commerce hosted a fundraising campaign for Chungs to pay their attorney fees and raised $64,000. The Chungs sold the dry cleaning shop which was in dispute, but still own an additional shop and said that would now focus on resources on their remaining shop. Do you know this case ran for four years?

2. A Woman Ended up Getting $1000 for the Wrong Weather Forecast 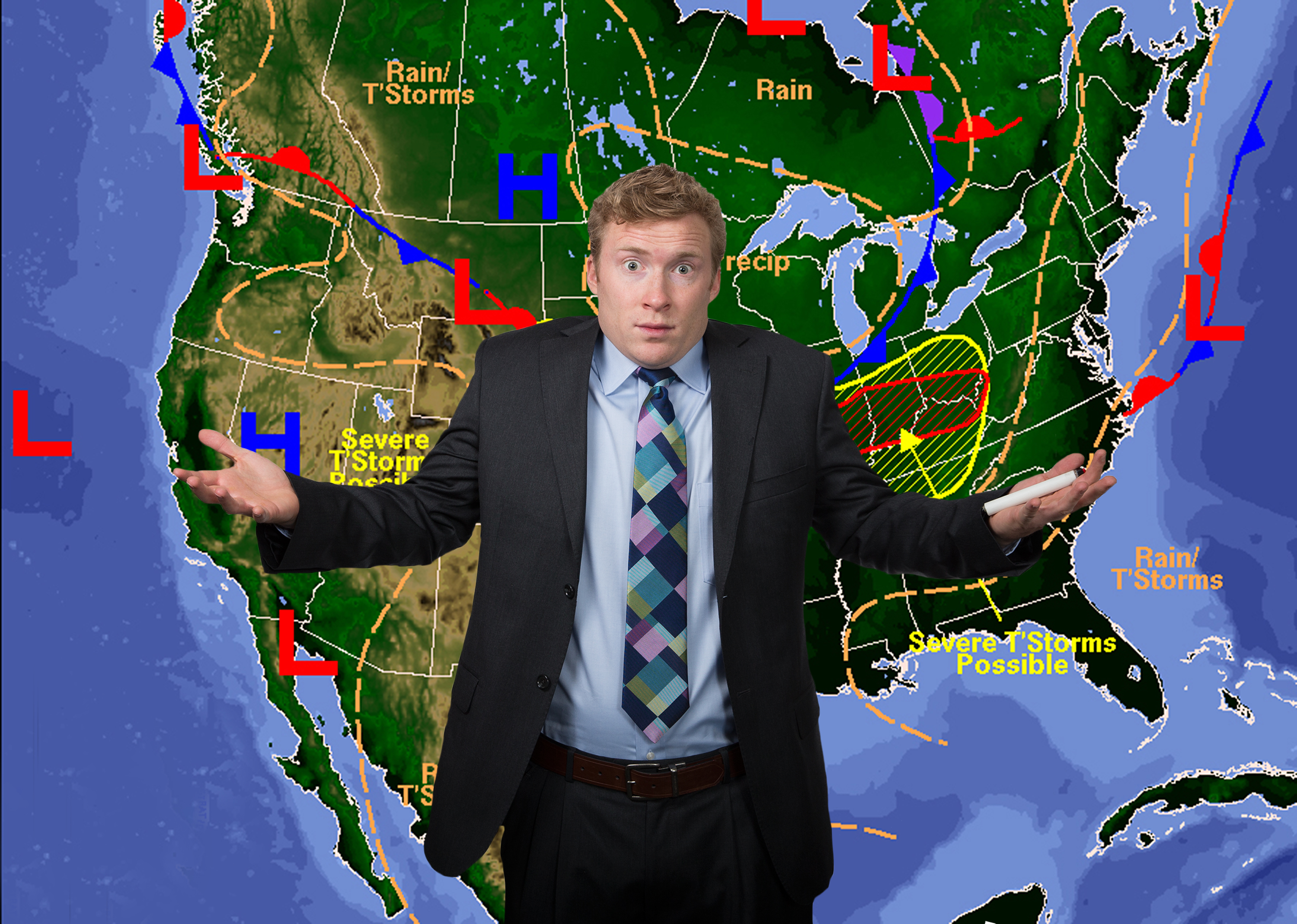 An Israeli woman filed a case against Tv station when the weatherman predicted pleasant weather and a nice day. She ended up getting caught in the rain. This made her sick, taking a week-long leave, and purchasing medicines. You won’t believe the lady filed the case claiming that the incident caused her stress.

Do you know what happened next, she won the court case. Really? Yes. Sometimes I think about why I am not so lucky.

3. Trina Thompson Filed a $ 72,000 Case Against the College Department for not Helping with her Job Search 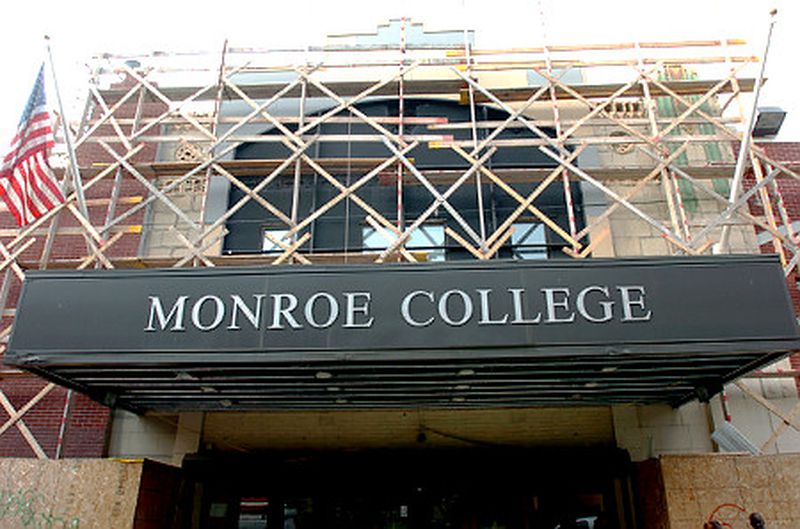 Trina Thompson of New York didn’t find a good job after graduating from Monroe College. She filed a case for $72,000 against the college.

Trina claimed that she graduated with 2.7GPA and the college department didn’t help her find a job instead, gave priority to students who got great grades. She regained the $70,000, which she spent on classes for her bachelor’s degree, plus $2000 for mental stress that she had during her job search.

I think she helped many other students who didn’t get a good job and were dependent on college services department.

4. When Prisoner Sued Himself

I bet, this case will make you scratch your head. A prisoner in Virginia sued himself. He claimed that he committed the crime because he was drunk and violated his religious beliefs. He sued himself for his wrong behavior for the sum of $5 million.

You will be amazed after knowing that he asked the state to pay him that amount. What do you think was the result? Yes, sometimes, judges are smart and intelligent. The judge Rebecca Beach Smith called this lawsuit ridiculous.

I wonder how people can be so daring? And here I am still afraid of rats!

5. 77 Years Old Playboy Filed Against a Teenager Girl for Refusing his Sex Offer 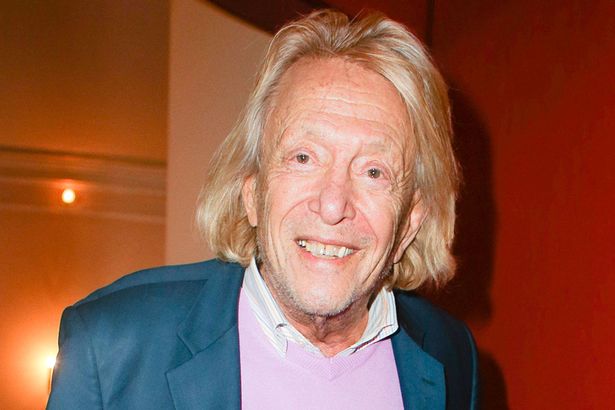 Can you even imagine this can be a case in a court? In 2007, Playboy Rolf Eden sued Katharina Weiss (a 19 years old girl) because she refused to do sex with him. Eden seduced her but was surprised when she rejected the offer. He said -

“It was shattering. No woman ever said that to me before.”

Do you know Eden has slept with up to 3000 women? Maybe this could be the reason why he became aggressive and filed a case against her.

Sex is one of those activities that everyone wants to enjoy until they die. But sometimes having sex may go wrong and result in death. Know about some bizarre deaths by sex here.

6. A Person was Expelled for Having Smelly Feet & So He Sued the University

A philosophy student Tenuis Tenbrook sued his university after it expelled him for having smelly feet. The professors and other students at the university in Rotterdam claimed that it was impossible to concentrate on studies due to that faint smell.

After getting expelled, he fought a 10-year legal battle for the case. In 2009, the judge ended the case by declaring him not guilty, and saying this can’t be the reason to expel him, and the fellow mates and the professor should hold their noses.

7. A Man Sued the City for His Injuries 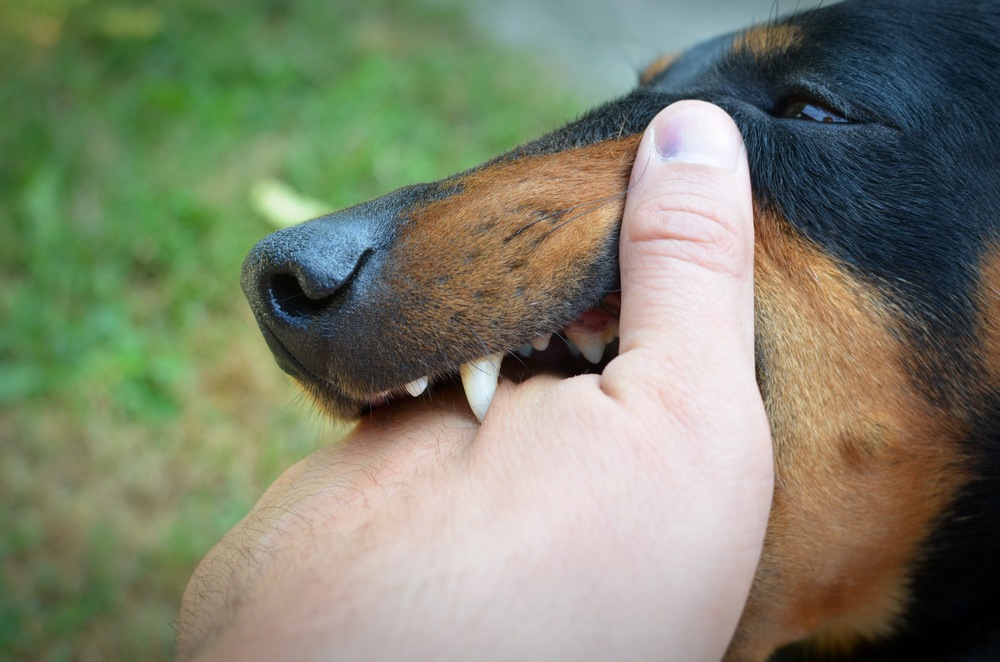 What do you do when a dog bites. You rush to a doctor for proper treatment. That’s it, and stay alert whenever you see a dog. But this man has guts to file a case against the city after he was bitten by a dog.

After being bitten by a dog on a bus, his middle finger got infected. He thought that this huge amount might help him forget the pain. I don’t know how the case ended, but this was a weird case anyone could handle.

8. What Do You Think a Tomato is? A Vegetable or Fruit?

I don’t believe this can be a court case. The case gained attention when John Nix 7 Co., one of the largest sellers in NY city, sued Edward Hedden - a collector at the Part of NY to recover fees they had spent on shipping the tomatoes because legislation stated that tax must be paid on vegetables and not on fruits.

During the trial, both the parties issued the statements to prove that it is a fruit and a vegetable to argue their cases. They argued against the point that botanically, a tomato is a fruit due to seed-bearing structure growing from the flowering part of the plant.

The court unanimously decided and stated that the scientific classification doesn’t change common language, and tomato is a vegetable. It stated-

“The passages cited from the dictionaries define the word 'fruit' as the seed of plants, or that part of plants which contains the seed, and especially the juicy, pulpy products of certain plants, covering and containing the seed. These definitions have no tendency to show that tomatoes are 'fruit,' as distinguished from 'vegetables,' in common speech, or within the meaning of the tariff act.”

9. He Sued His Wife for Limiting Sex Once in a Week 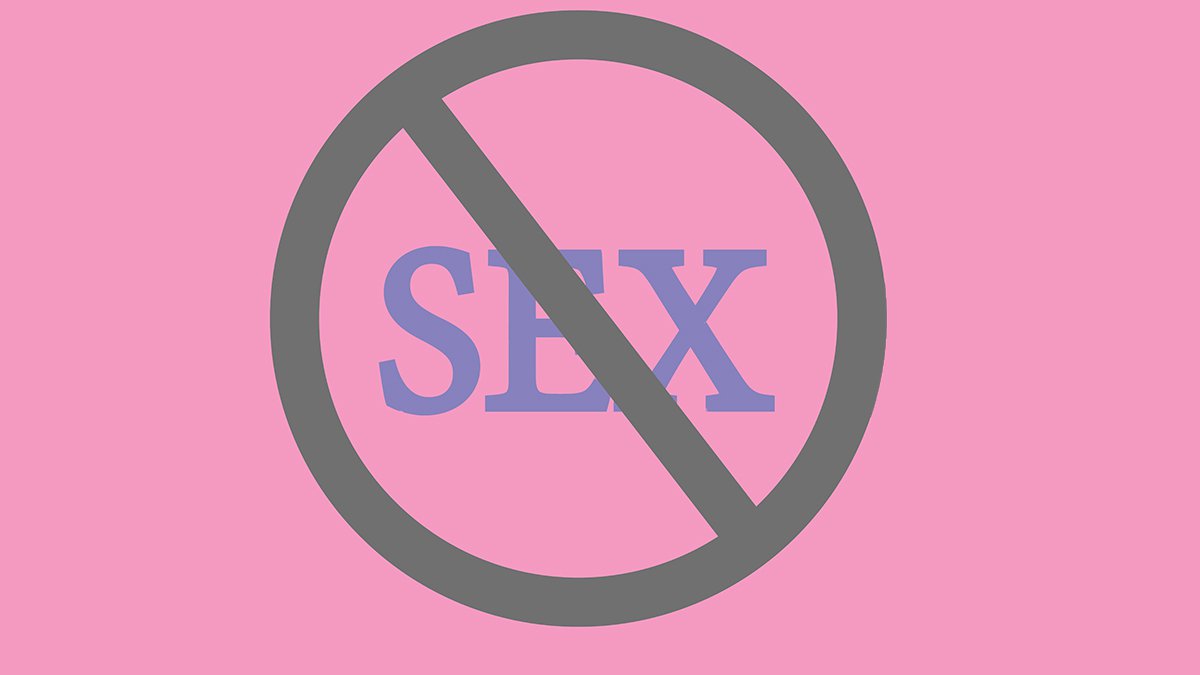 David Mason sued his wife after she limited sex to once a week because she was scared of getting pregnant for the third time. David won this case in 1980, but he lost on appeal when judges declared that no court could rule that his wife Brenda was unreasonable.

10. Allen Heckard Sued Michael Jordan for Looking Like Him 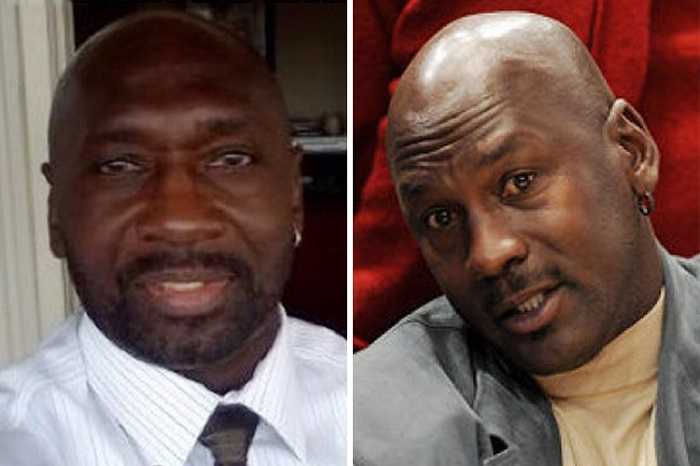 Being a celebrity is not an easy task. Apart from fame, you have to deal with media rumors and other issues. But do you know popular basketball player Michael Jordan was sued by a random person Allen Heckard because he claimed that he looks like him? He filed a case against Jordan and Nike founder Phil Knight for combined over $832million. He said -

Allen sued Knight for the permanent injury and promoting Jordan. He could not attend parties, or eat peacefully at a restaurant, and ride public transportation.

After reading such bizarre cases, I thank myself that I didn’t choose law as my subject. Otherwise, I might be solving these ridiculous cases and would scratch my head for justice.

Did I leave any lawsuits that should be included in this bizarre court cases list? If so, drop your comments below.