Scientists wielding a samurai sword and hacking pig carcasses. The main agenda of this research was to support the investigation of murder where the victims killed by these weapons and to identify feature specific to a machete and katana on three different bone types. 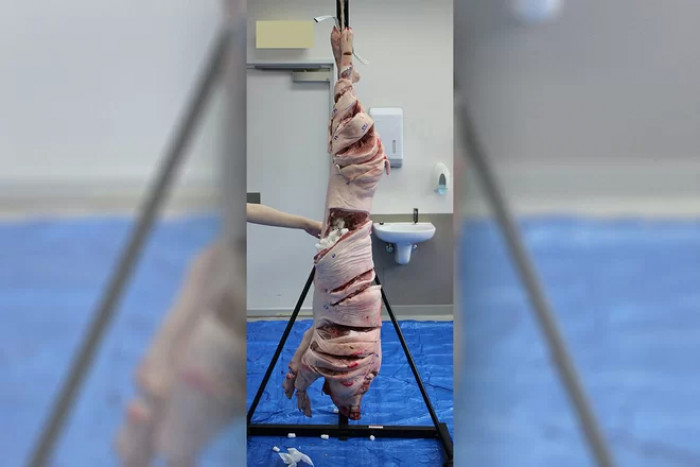 Just for the sack of science, a scientists wielding a samurai sword and stabbing pig carcasses with samurai swords.

The motto of this strange exercise was to examine cut or wounds from both machetes and Japanese samurai swords. Basically, scientists were trying to identify murder weapons from the cut marks they leave behind.

Though this research is quite instructional. In order to clear it out, lead author Penny McCardle a consultant forensic anthropologist said to the Newcastle Department of Forensic Medicine in Australia, that the main purpose of this research is to support the investigation of murder where the criminals actually used these Japanese samurai swords known as katanas. He said that these type of dreadful murders case raised in the past 10 years and "the perpetrators were caught,"

Something Important was Missing

Although, the case was quite revolving around the weapons used in the murders and cut marks so, without wasting any more time McCardle began analyzing the cut marks on the victim’s bone, said sources. And guess what? She figured out that there was almost no research done on the cut marks made by katanas. So, she started doing more research on it.

After spending a lot of time in research into hacking weapons, in particular, she find out that there was no important information present allied to cut marks, the only stuff she got is like machete "is a promptly available tool throughout the world and often used in violent crime, said sources. That’s about it, information about cut marks was not there which was actually the center point of the that investigation.

That’s why she wanted to attempt a deep research on this subject (cut marks that both katanas and machetes leave behind) in order to help archaeologists and forensic scientists. In order to identify murder weapon, scientists were all set to start an experiment on male juvenile domestic pig carcasses (the dead body) weighing about 100 to 110 lbs (45 to 50 kilograms). In order to keep their internal portion stable, the carcasses were filled with Styrofoam packing peanuts.

Now it was the time to begin welding and cutting experiment, for which the researchers used a factory-made machete, a factory-made katana and a katana forged. According to sources, McCardle said that, the volunteers wielding the machete had no experience in cutting carcasses, while on the other hand, volunteers wielding the traditionally forged katana has 16 years of experience.

Users who were using inexperienced weapon faced so much difficulty in hacking and cutting, said sources.

About the Cutting Marks

Scientists looked at the cut marks and found the difference in the cut marks associated with each weapon. They deeply analyze each cut mark made by the weapons on the bones and found a trait unique to the katana on all three types of bones (flat bones, shoulder bones, and limb bones).

According to the sources, the difference in cut marks may occur due to the difference in blades, the way the blades are used and the angle of impact on the bone. Well, there are more things which can be explored like whether it is possible to conclude the experience of the sword user based on the cut mark traits.

The scientists have now concluded the difference between cut marks made on bone by a Machete and Katana detailed it in the Journal of Forensic Sciences. You can check it out for more details here.