WTF! Snake Tries To Bite This Biker On The Road – Thankfully He Is Safe

There is 100% chance of getting bite by a snake if you are in a jungle or at a lonely place. You may have seen snakes crawling ... 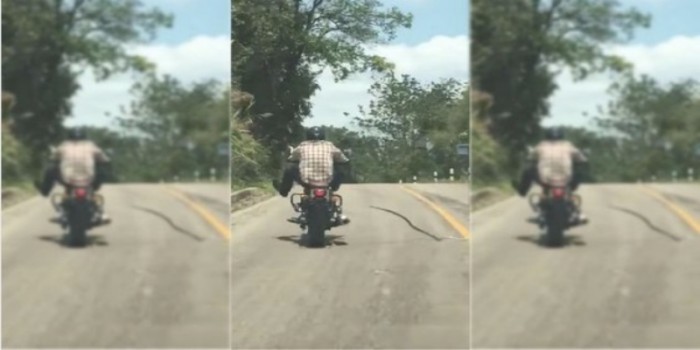 Here is a video of a biker driving down a street, who is just saved by a snake bite who was hanging out in the middle of the road. Just as the rider passes by the road, the snake attempts to jump on the rider and the man lift his leg up to avoid the bite.

Luckily, the biker was smart and didn’t hurt by the snake attack. The snake moves further in the way of oncoming traffic in the process.

Next time, don’t be tricky that snake only bites at a certain place, they could be present anywhere anytime. Better you watch it when you are the road too. Thankfully, this time it was some random man, but you can be the victim of the snake bite too.

Although some find this video the hilarious one, but on a serious node, it is quite serious. And one thing, you got to know that snakes can jump!! Well!! I didn’t know that!

This Book Will Get You high On-The-Go, Literally!