15 Famous Misquotes That Everyone Thinks Are True

You should never believe everything that you read online. Often quotes are written alongside the photograph of a major personali... 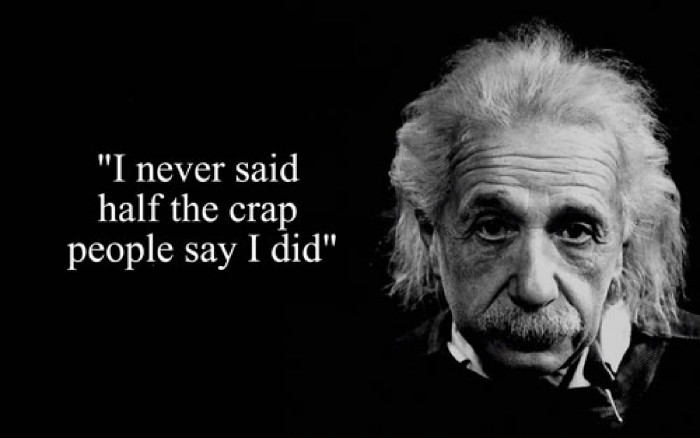 You should never believe everything that you read online. Often quotes are written alongside the photograph of a major personality who has not actually said it or quotes are misinterpreted in another sense or certain alterations are made by people. This happens for multiple reasons. Some original quotes are clumsy, some are modified for propaganda reasons and some do not match to the style of language we expect. They might seem real to a reader but are actually incorrect. These errors being made in famous quotes on the internet fall under three major categories.

Internet is a place for fun as well as carrying out studies and research. It is easier to provide such content that the audience appeals to rather than portraying the actual truth. This is why many quotes go undisputed for years and to the extent that they are actually considered truthful.

In this article, we discuss about the famous quotations that became misquotations for the inclinations of people with the help of internet.

1. "The only good Indians I ever saw were dead"

Philip Henry Sheridan was an officer in the United States Army and the Union general during the American Civil War. He also fought in the Indian Wars of the Great Plains. The quote mentioned above is said to be quoted by Sheridan in a reply to Comanche Chief Tosawi. But Sheridan denied to this. Biographer Roy Morris Jr. states Sheridan saying, “The only good Indian is a dead Indian”. The variation has been used by people to characterize his Indian fighting career.

2. “I have nothing to offer but blood, sweat, and tears”

After World War II, when Winston Churchill became the Prime Minister, in his addressing speech to the British people, he said-

“I have nothing to offer but blood and toil, tears and sweat”

The phrase has been shortened over these years.

3. “All that glitters is not gold”

The saying means that everything that things that look precious or true may turn out to be different. This expression has been derived from William Shakespeare’s play The Merchant of Venice. The word ‘glitter’ was not used; ‘glisters’ was used. ‘Glisters’ is the 17th century synonym for ‘glitter’. The line comes from the secondary plot of the play.

4. “Be the change you wish to see in the world”

“If we could change ourselves, the tendencies in the world would also change. As a man changes his own nature, so does the attitude of the world change towards him. ... We need not wait to see what others do.”

5. “Be yourself; everyone else is already taken”

There is a beauty in this misquote. It captures the essence of the supposed speaker. The quote never actually shows up in the writings of Oscar Wilde but some of his quotes have expressed similar sentiments. In the De Profundis letter, Wilde wrote,

“Most people are other people. Their thoughts are someone else’s opinions, their lives a mimicry, their passions a quotation.”

In another book he said

“[O]ne’s real life is so often the life that one does not lead.”

William Tecumseh Sherman was a General in the Union Army during the American Civil War. After the U.S. Civil War, he gave a speech to the Ohio audience. He said-

“There is many a boy here today who looks on war as all glory, but, boys, it is all hell. You can bear this warning voice to generations yet to come.”

‘War is hell’ is a shortened phrase from these lines.

The proverb means extreme greed of wealth or materialistic gain gives rise selfish actions. This proverb is quoted in Bible but has been slightly changed. The actual proverb is "The love of money is the root of all evil."

8. “The definition of insanity is doing the same thing over and over and expecting different results”

This quote is attributed to many famous thinkers but Albert Einstein is most often associated with this. There is no scholarly consensus on who actually coined the phrase but there is one theory that suggests its first appearance. According to this, there was a quote in the 1981 book Narcotics Anonymous. It does not include the exact quote mentioned above but has the same sense and is probably derived from this quote.

“Insanity is repeating the same mistakes and expecting different results.”

Sarah Palin was the ninth governor of Alaska. Apart from being a politician, she is also a great commentator and an author. When Sarah Palin was asked about her insight into the country’s affairs while considering Alaska’s proximity with Russia, Sarah answered,

“They’re our next-door neighbors. And you can actually see Russia from land here in Alaska.”

“I can see Russia from my house” was actually a Palin-ism uttered by Tina Fey when she was dressed as Sarah Palin in a skit on “Saturday Night Live”.

“Gild the lily” is a very common misquotation from William Shakespeare’s play King John. The original version of this quote is-

"To gild refined gold, to paint the lily, to throw a perfume on the violet, to smooth the ice, or add another hue unto the rainbow, or with taper-light to seek the beauteous eye of heaven to garnish, is wasteful and ridiculous excess."

11. “The only two certainties in life are death and taxes”

This is an example of both misattribution and misquotation. Mark Twain did not coin this phrase. In the ‘Dancing Devils’ written by Edward Ward in 1724, he wrote “Death and Taxes, they are certain.”Christopher Bullock also wrote in ‘Cobbler of Preston’ in 1716 that “Tis impossible to be sure of anything but Death and Taxes.”

Edward Murphy did not say this. However, it can be found among the popular lines of Murphy’s Law which states "whatever can go wrong, will go wrong" or "things will go wrong in any given situation, if you give them a chance." Many other variants have also been formulated, one of them includes - “If there’s more than one way to do a job, and one of those ways will result in disaster, then somebody will do it that way”.

13. “I disapprove of what you say, but I will defend to the death your right to say it”

In French, this translates to “Je désapprouve ce que vous dites, mais je défendrai à la mort votre droit à le dire”. This quote is said to be quoted by Voltaire. But Voltaire’s essay on tolerance actually says- “Think for yourselves and let others enjoy the privilege to do so too”. Both these quotes cannot be attributed to same sense.

The above misquote actually comes from the 1907 book Friends of Voltaire written by Evelyn Beatrice Hall.

This quote is popularly attributed to Niccolò Machiavelli, who was an Italian politician, philosopher, writer, historian, diplomat and a humanist. “The ends justify the means” does not come from Niccolò Machiavelli or his writings. He actually said, "One must consider the final result," which isn’t as captivating as the one attributed by folks.

15. "Go confidently in the direction of your dreams! Live the life you've imagined."

“I learned this, at least, by my experiment; that if one advances confidently in the direction of his dreams, and endeavors to live the life which he has imagined, he will meet with a success unexpected in common hours … In proportion as he simplifies his life, the laws of the universe will appear less complex, and solitude will not be solitude, nor poverty poverty, nor weakness weakness."

10 Airports With Most Dangerous Landings in the World