10 Airports With Most Dangerous Landings in the World

Ever been on an airplane and felt frightened at the time of take-off and landing? We’ve all been there and experienced that m... 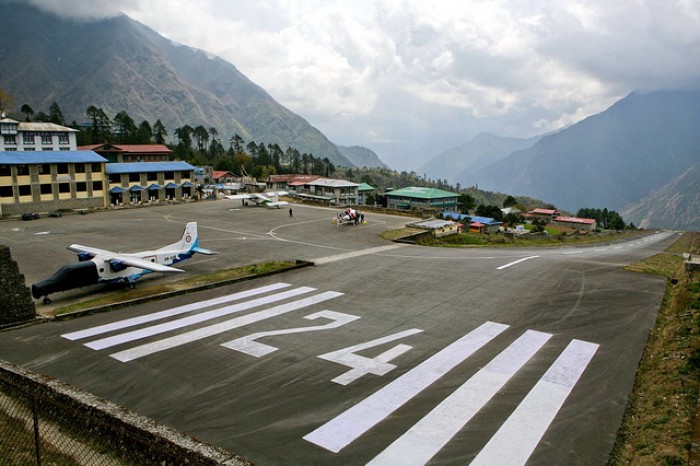 Ever been on an airplane and felt frightened at the time of take-off and landing? We’ve all been there and experienced that moment. But it gets even more harrowing if you are about to land on one of these airports as listed below. Short runways, extreme locations at high altitudes, or difficult approaches are the reasons why even highly trained and qualified pilots have a hard time landing on these airports.

So here’s a list of 10 such airports around the world having the most dangerous landings. These will make you want to stay on the grounds for some time after watching these.

Saba’s airport has one of the world’s shortest runways. At nearly 1300 feet, pilots call landing on this exposed strip of tarmac land so thrilling that it feels like landing on an aircraft carrier. Before landing, the pilot essentially needs to fly headlong towards a cliff before they make a sharp bank towards the left. Situated high above the surrounding ocean, the runway is surrounded by precipitous drops from three sides.

The hilly terrains and notoriously short runways make the landing at Toncontin International Airport terribly difficult for the pilots. It was in 2007 when the work was started to remove the hillside at the airport’s end. One year later in 2008, the large aircrafts got banned after an accident took place. This accident claimed the lives of five people and several got injured.

This high-altitude was airport was renamed to pay homage to the first conquerors of Mount Everest ‘Edmund Hillary’ and ‘Sherpa Tenzing’. The approach requires the pilot to navigate a highly risky route via the mountains of the Himalayas and then quickly hitting the propellers in the reverse direction so as to avoid crashing into the huge wall of rock at the end of the runway.

Sea Ice Runway is a 2.5-mile runway is carved every year into the sea ice off Ross Island. It is operational during most of the Antarctic summer. The runway demands the pilot to avoid heavy landing and ensure close monitoring of the stationary aircraft so that it doesn’t sink more than 10 inches into the ice.

The pilots need to adopt a fjord approach for landing and have to face the ever-present dangerous turbulence. The pilots who have a thorough knowledge of weather conditions and local terrain are only allowed to attempt this approach. Landing and take-offs are strictly banned during the night.

Princess Juliana International Airport needs an over-water flight approach where pilots must keep a constant check on the altitude. By maintaining a correct altitude as the sea nears in order to avoid disorientation.

The airport at the tiny island of Gibraltar necessitates the pilots to hit brakes the moment wheels touch the tarmac. If not executed this way, the aircraft makes a watery landing and lands on the other end of the runway.

The high altitude airstrip of Courchevel Altiport located in the Saint-Bon-Tarentaise region of the French Alps allows only a selected few certified pilots to land the airplane. This short runway has a steep slope and is designed at a gradient of 18.5% so that the airplane slows down during the landing. The altiport has a tricky approach through deep valleys with risky mountainous weather conditions.

The airport in Madeira is quite close to the mountains and seas, so there’s a greater risk of shaky landings. The poor weather conditions and the turbulent windy atmosphere prevent the chances of a smooth landing.

7 Scariest Mermaids You Have Seen In Hollywood Movies