Museums Participate in #CuratorBattle Challenge & Exhibit the Creepiest Object They Have

The Yorkshire Museum in England has launched a weekly Curator battle on social platforms to showcase their creepiest objects on a theme. 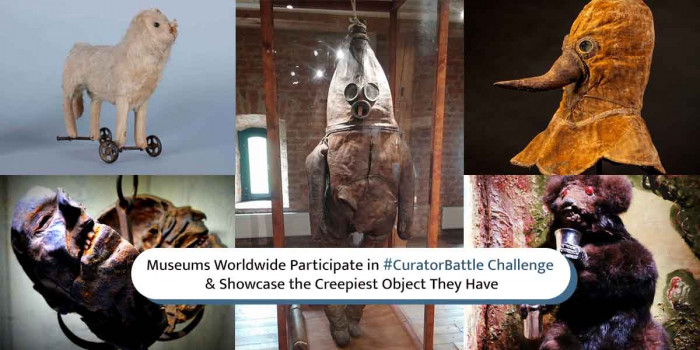 When you were a kid, you must have visited museums during those days. Whether you are an art lover or a history lover, museums have something for everyone. Also, if you are bored of watching those regular old sculptures, then you must visit the Warren Occult Museum that has an array of haunted artifacts. The museums across the world have several controversial things to look for.

Since the coronavirus pandemic has hit the world, people are doing several things. Indeed! It has changed everyone’s lifestyle. People are connecting via video calls, not going outside, and working from home.

But do you know that tourist attractions like museums have initiated a social media challenge to showcase the creepiest objects they have based on a theme? A Yorkshire museum based out in London recently started #CuratorBattle challenge for other museums around the world on social platforms to showcase the weirdest object they have.

A few days back, the museum posted a picture of a hair bun that belongs to the third or fourth century. Several museums participated in the challenge and posted pictures of the weirdest objects. Right from haunted dolls to plague masks, several unique pictures were seen on social media.

MUSEUMS ASSEMBLE! It's time for #CURATORBATTLE! ????

Today's theme, chosen by you, is #CreepiestObject!

We're kicking things off with this 3rd/4th century hair bun from the burial of a #Roman lady, still with the jet pins in place...

CAN YOU BEAT IT? ???? pic.twitter.com/ntPiXDuM6v

Other establishments in France, America, Canada, and other countries have responded to the challenge with unique exhibits such as jewelry made from human fingers and bizarre taxidermy. If you plan to visit museums with kids, then these museums in America have the best atmosphere for kids.

The German history museum revealed a scary plague mask from between 1650 and 1670. The Pitt Rivers museum shared a picture of a “sheep’s heart stuck with pins and nails, to be worn like a necklace for breaking evil spells.”

Sheep's heart stuck with pins and nails and strung on a loop of cord. Made in South Devon, circa 1911, "for breaking evil spells", @Pitt_Rivers collections #CreepiestObject #CuratorBattle pic.twitter.com/z5vdCFCU4S

Thanks for thinking of us @HottyCouture and wow, will we be having nightmares tonight with all these #CreepiestObject|s ! Here is the one we just can't hide from you, one of our many creepy gems – our Plague Mask (1650/1750)! #curatorbattle pic.twitter.com/JrMjqAJSIM

The Royal Armouries Museum in Leeds uploaded an iron mask that was designed for public humiliation.

Turn the creep up to ???? and check out this iron mask that was exhibited in the @TowerOfLondon as an Executioner's Mask. However, due to its grotesque appearance, we think it's more likely part of an elaborate scold’s bridle - an iron muzzle designed for public humiliation ???? pic.twitter.com/1nG4mMZRex

The Natural Science NMS shared the creepiest object as their mermaid with a fish jaw inserted in the mouth.

"The curator battle has been gradually building as more and more museums and the general public look at our Twitter feed every Friday to see what theme we're going to pitch."

Carroll said it is great that museums are sharing their collection to the public when they can’t visit it. The York's Museum Trust, which runs different museums, including The York's Museum was closed due to the coronavirus pandemic. The manager of the trust said they lost nearly 60-70% of their income; most of it comes from visitors.

"Social media is one of the few ways we can still engage with audiences so we have been working really hard to come up with innovative and interesting ideas to get people talking and learning about objects in our care."

Ripley's Believe It or Not! shared a real-life vampire of Dusseldorf.

Hold up! We’d be totally remiss if we didn’t jump on this #CreepiestObject train. We’re way a-head of you with the severed noggin of Peter Kurten, real-life #Vampire of Dusseldorf! ??????????? You can fang us later for the #nightmares. #CuratorBattle pic.twitter.com/7uritZMmIc

PEI Museum shared a picture of a children’s toy that was found inside the walls of a 155-year-old mansion. They called it a Wheelie.

Bringin’ our A-game for this #CURATORBATTLE! What is it? Just a CURSED CHILDREN’S TOY that we found inside the walls of a 155-year-old mansion. We call it “Wheelie” - and it MOVES ON ITS OWN: Staff put it in one place and find it in another spot later on…. #Creepiestobject pic.twitter.com/FQzMzacr8a

Here are other unconventional museums in London that are worth visiting.

Raahe Museum in Finland shared the picture of the 18th-century diving suit.

Can I offer up the 18th century diving suit from Raahe museum in Finland? pic.twitter.com/mP9FqB9uly

York Art Gallery shared the horrifying picture of a severed leg that has its legs and a beastly head. (This is the creepiest object I have seen).

GUYS we know we have already won. This severed lower leg by Kerry Jameson has sprouted its own legs and a rather beastly head. @COCAYork #RethinkCeramics pic.twitter.com/Ip84aNacUX

The Toy Museum of Penshurst Place uploaded the picture of a drinking Bear. It shared the caption,

“We present the Drinking Bear. Feed it a 2 pence piece and it'll pretend to drink from its cup as it stares into your soul."

Live from the Toy Museum of Penshurst Place, we present the Drinking Bear. Feed it a 2 pence piece and it'll pretend to drink from its cup as it stares into your soul. #CuratorBattle #CreepiestObject pic.twitter.com/ohNl2974UJ

As the only staff member at Red Lake Regional Heritage Centre (Ontario, Canada) with a Twitter, allow me to present creepy kids costumes for #CreepiestObject #CURATORBATTLE pic.twitter.com/u4LPWi0xjf

Several challenges are making rounds on the internet. While some are challenging to make the earth clean, others are challenging to prove their skills. Earlier, #trashtagchallenge went viral, and thousands of participants posted their pictures on social media. Later, #Bottlecapchallenge came, in which you had to twist the bottle cap without knocking the bottle over.

It feels overwhelming that museums are taking a keen interest in sharing their weirdest objects to the public without any demand. Which of the above objects do you find the creepiest of all?

What are your thoughts on the museums competing over this bizarre trend? Share your views.