Shoe Trees: The Origin & Bizarre Legends of an Unusual Ritual Prevalent Around the World

Shoe trees date back as long as the Great Depression era in North America. This strange tradition has stranger legends surrounding it and these shoe trees have been popping up in various corners of our vast planet. 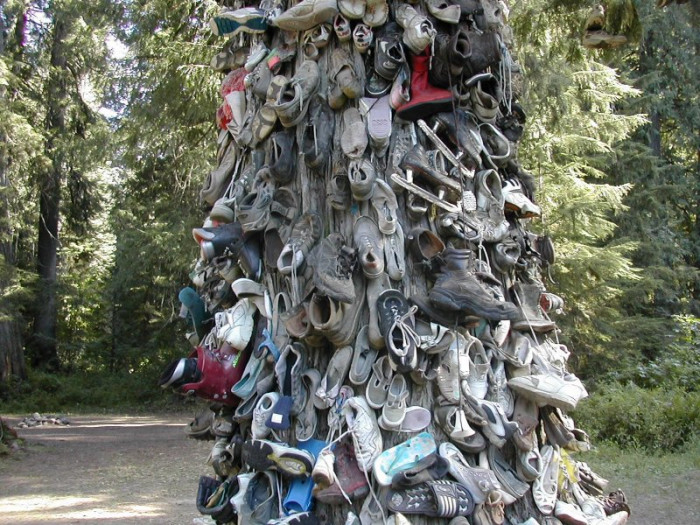 We, humans, have a strong innate desire to make a mark in the world, either as an expression of ego or mischievousness. Mostly, these markings are quite mundane and uneventful: clumsy messages written over bathroom stalls or in Sharpie, just like the spray-painted tags in underpasses.

But in rare cases, the cryptic signs and symbols left by people in public places are strange yet beautiful. Just recall the bridge in Paris where ‘love locks’ or padlocks were fastened and the messages written by visitors to Elvis on the gates of Graceland. Even stranger evidence of such human desire is “shoe trees” that are adorned with boots, slippers, ice skates, sandals, sneakers, other different kinds of footwear.

In contrast to the Paris’ Love Lock bridge or gates of Graceland, shoe trees are a widespread phenomenon and have existence around the world in hundreds of places.

How, Why & When Did This ‘Shoe Tree’ Phenomenon Begin? 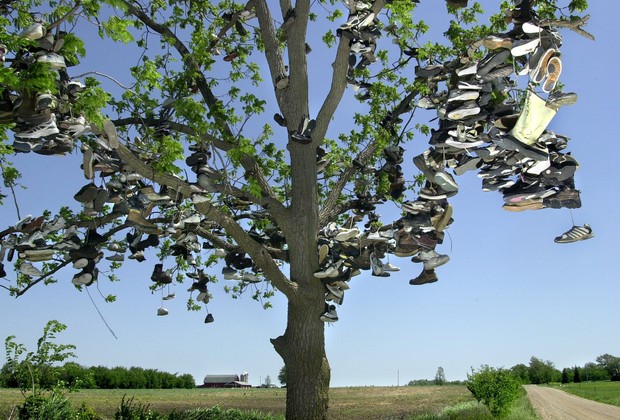 The story of the origin of this unusual phenomenon is pretty interesting and complex. It began in North America somewhere around the Great Depression when people who lived in the same community would at times hang extra pairs of shoes on trees for others to take as not everyone could afford their own pair of shoes.

After the Great Depression came to an end, this tradition went on. America got involved in a series of wars - World War II, invasion of Korea, and Vietnam. The soldiers coming back from the war began tying their military boots together and tossed them into trees to signify,

But this bizarre phenomenon somehow traveled out of North America and reached other continents. But nobody seems to know how, when, and why.

As per a public platform where people record and categorize unique locations across the world, hundreds of users from Hawaii, the UK, South Africa, Australia, Netherlands, Germany have and other countries have posted photos of shoe trees.

If you happen to read and understand languages other than English, you will discover manifestations of shoe trees in the Middle East, China, Russia, and other corners of the big planet.

Some Weird Legends Around This Quirky Local Tradition Some people have made weird claims about shoe trees. A myth surrounding a shoe tree in Salem, Michigan says that a local serial killer fastened the shoes of his victim to the tree trunk to maintain a record of how many lives did he take.

And as reported in Toronto Sun, shoes trees are “some kind of fertility ritual” in UK and Europe. The internet also has anecdotes of people who threw shoes of a deceased loved one high onto a nearby tree as a token of remembrance.

A mayor of a small town in rural Ontario once reported to a news outlet,

“One young lady, her father passed away, she threw his shoes up there. [Sometimes] she stops and visits and talks to him.”

What’s more, some people write messages or personal achievements on their shoes using a permanent marker before they throw them over a huge elm or oak tree nearby road behind the old train station. In certain places, a legend believes that if you allow a pair of shoes to fall from the tree, it is a misfortune for life. 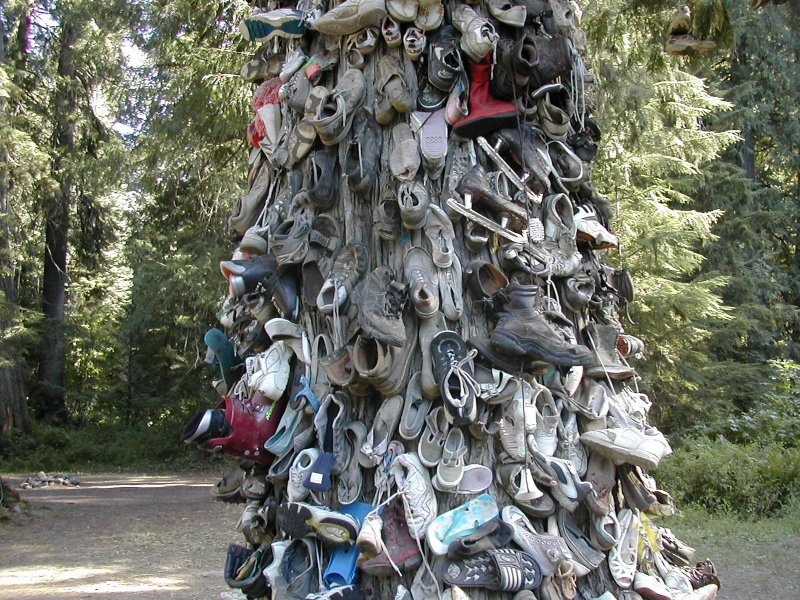 A writer named Kristin Connon living near a shoe tree in Small Town, USA wrote in a BoredPanda article that it is “just a quirky little local tradition”. In an online guide of offbeat destinations ‘Roadside America’, shoe trees are called nothing more than “a strange ritual by bored locals.”

Many shoe trees have been found for years long. ‘The Record’ newspaper reports that they are “handed down from generation to generation.”

The trees will die at some point. They will wither away or will be blown away by strong winds just like the huge shoe tree in Beaver, Arkansas became a victim of the storm around 20 years back. They might even be burned down or knocked down by bulldozers or bubbled into a “molten rubber fire” just like the tree in Priest Lake, Idaho where firemen discovered shoes that dated back to the 1940s when the tree was mysteriously set to fire in 2010.

Does the rotting, withering, or disintegration of trees matter?

Not really, maybe. Other trees will grow at their place and we mortal humans will keep documenting and photographing them so our future generations will get to know of our cultural history, no matter how weird it is.

10 Most Haunted & Spookiest Tunnels From Around the World