17 Weird British Laws That You May Have Broken Unknowingly

Do you know hugging without permission is a crime in the UK? Also, you cannot clean your doormat after 8 AM there. Read more weird British laws here. 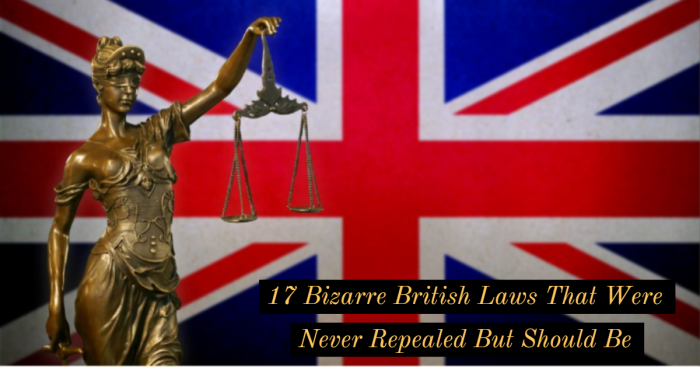 What do you think- why the laws are made? To resolve disputes, maintain order, and to protect citizens and society. Right?

Have you ever crossed the red signal or broke traffic rules? Do you think you are an obedient citizen of the country? Yes, you pay taxes before the due date, drive at 30-40mph, and also help others in need.

You might think that murdering and kidnapping are the only punishable offense. But you are wrong! Chances are you are breaking or have broken several laws unknowingly. Do you know that walking in your house naked is also a crime? Talking in an elevator is prohibited? These are some of the several strange crimes that you commit often.

Every country has its rules and laws. Some are outdated, bizarre, and maybe wrong to people who live in it. The United Kingdom of Great Britain is not an exception. The British Broadcasting Corporation (BBC) organized a competition a few years ago to see which laws are stupid and are still followed. Several weird British laws are doing the rounds on the internet. Some of the laws are twisted; others are open for correction.

You would be shocked to know that in London, you can’t allow your pet to mate with other pets of the royal mansion without permission. When you live in a country that is thousands of years old, you have to deal with its laws and history. And there would be bizarre laws on the books that are meant to be followed by the citizens. If you love to travel, then you should be aware of the rules the country has because you never know which act of yours can turn into a severe crime.

Take a look at some weird British laws that are unfortunately never repealed.

1. No Chocolates on a Public Conveyance (Only for Women) 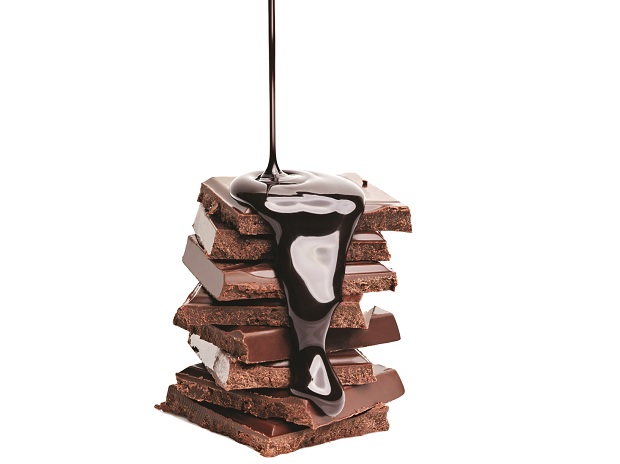 Yes, you read it right. In London, a lady can’t eat chocolates on a public conveyance. What about men, then? The fact that men can eat whatever and wherever they want still annoys craving women.

Imagine men enjoying chocolates in front of women! There is no trace of such offense, but it is worth mentioning. This is a shocking law even in the 21st century. I am wondering- why is it gender-specific?

2. S*x is Illegal on a Parked Motorbike

Some people are addicted to S**. They can do S*x in the stadium and anywhere in public.

But London has different rules regarding S**. In London, you can’t go intimate or do S*x on a parked motorbike. Your vehicle should run even at a slow speed.

I don’t know when and how this weird British law came into existence, but it is hilarious. Imagine doing S** on a running motorbike, isn’t it strange? And what, when you hit other vehicles on the road? Here are more bizarre cases when people died while doing S*x.

3. You Can’t Use Television in Britain Without License 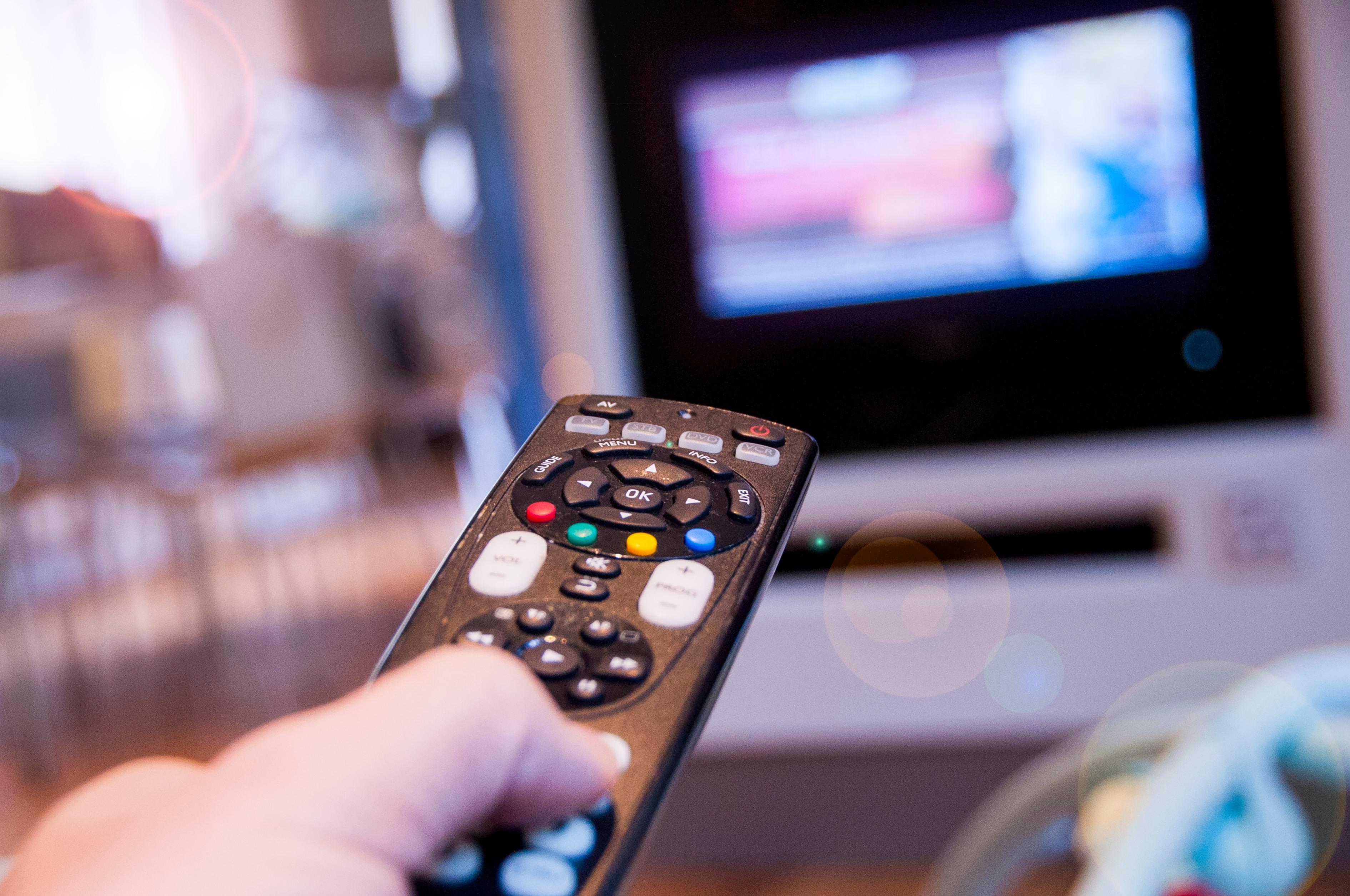 Under Section 363 of the Act, citizens can’t use television or record any TV programs without a TV license. Be it a business, hospital, or school: everyone is required to have a television license to record and watch live TV broadcasts.

The license fee is collected by the BBC, which is used to fund television, radio, and other services of the BBC itself. Without a license, you can legally watch Netflix, Youtube, Amazon Prime, Non-BBC catch-up, including Channel 4 and other channels as long as it is not live.

A TV License is a legal permission to use TV and to record TV programs. This could be on TV, Laptops, digital boxes, and VHS recorders.

4. It is Illegal in the City of London to Carry Corpses or Rabid Dogs on a Cab 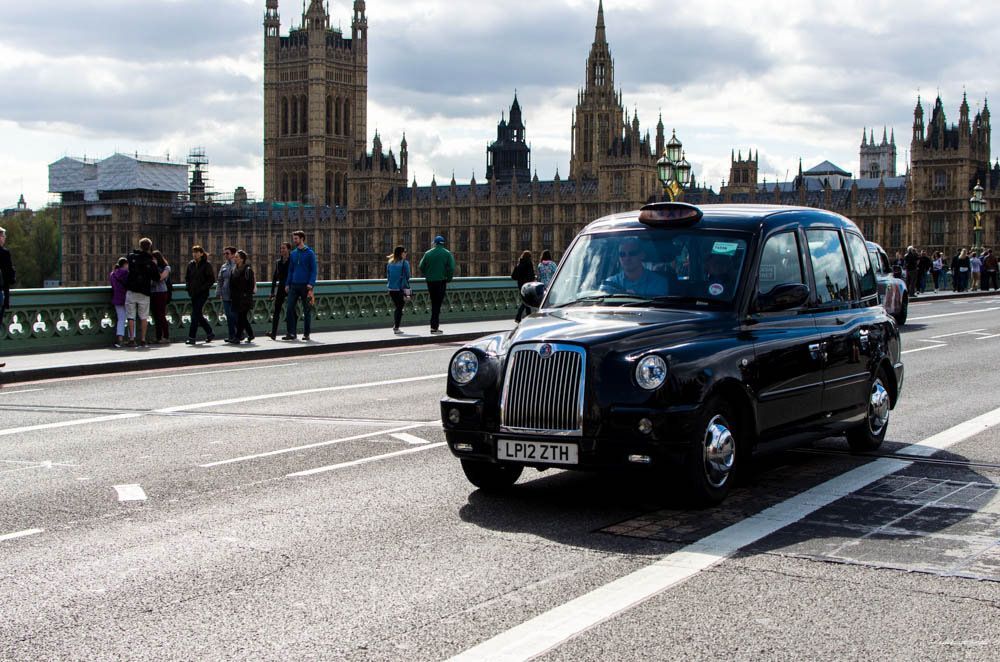 Why would someone travel with a rabid dog on the streets? The owner would take it to the veterinary hospital. But regardless of this law, everyone assures not to take their pets in cabs.

There is another law that the corpse can be moved only in special vehicles like an ambulance. There can be the case when a person traveling in a cab died of a heart attack, and the driver does not know. I found this as one of the weirdest British laws. 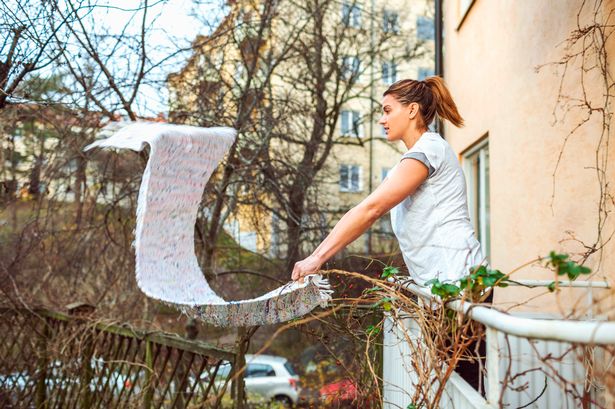 Should there be a time to dust off the doormat? I clean it when I find it dirty. But you can’t do this in London. As of 1839, in London, it would be an offense if you shake or clean your doormat after 8.a.m. If the police caught you doing this, then you can be warned or arrested. 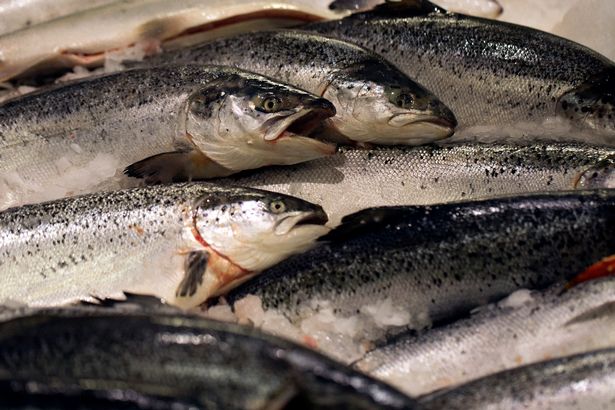 Do you know what does it mean? I don’t know either!

Section 32 of the Salmon Act 1986 outlaws ‘Handling of Salmon in Suspicious Circumstances’. So never do it! It is cited in the list of unusual laws.

This section considers it a huge offense for someone who receives or disposes of salmon, where the authorities suspect that the salmon was illegally caught.

7. Taxi Drivers Must Ask the Passengers If They Have Plague or Smallpox 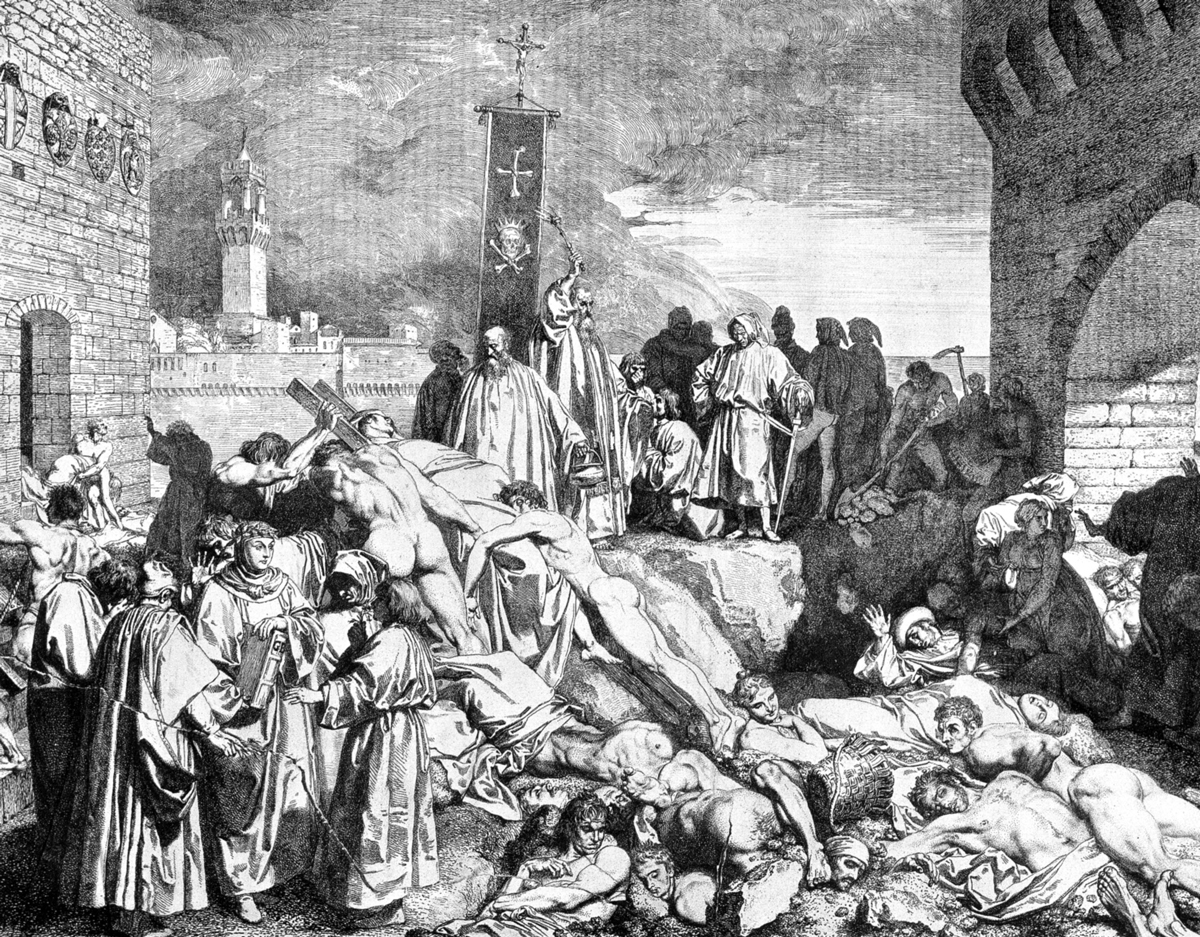 This might sound weird to you. But taxi drivers must confirm from the passengers if they are suffering from any disease. It doesn’t matter; whether a passenger has worn a three-piece suite or looks exciting, drivers have to ask something that he/she might find rude. If they allow you to enter into their taxi, then it is fine.

The law prohibits any person (who knows to have the plague or other diseases) from entering into the public conveyance, without telling the driver. The driver has the right to say no to the passenger if he/she is infected.

But what happens when the driver himself suffers from the plague? I think this should also be considered in the laws.

8. Being Drunk in a Pub is Illegal 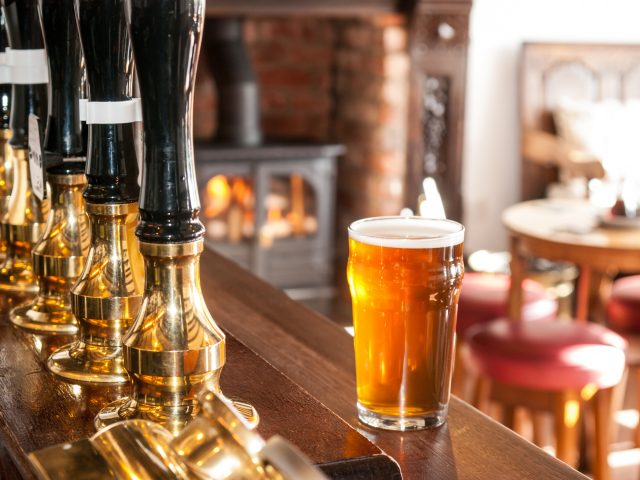 The UK is notable for having a lot of pubs. But do you know the British law doesn’t allow anyone to be drunk in the pub? The UK does not allow people to be drunk in pubs.

According to the Metropolitan Police Act 1839, it is illegal for the ‘keeper of a public house to permit drunkenness on-premises,’ Being drunk is illegal in itself. Other offenses may include being drunk on the highway or public place.

If it is not allowed to be drunk in a pub, then why does everyone go to the pub? For dance? Maybe!

9. Knocking on the Door is a Criminal Offense 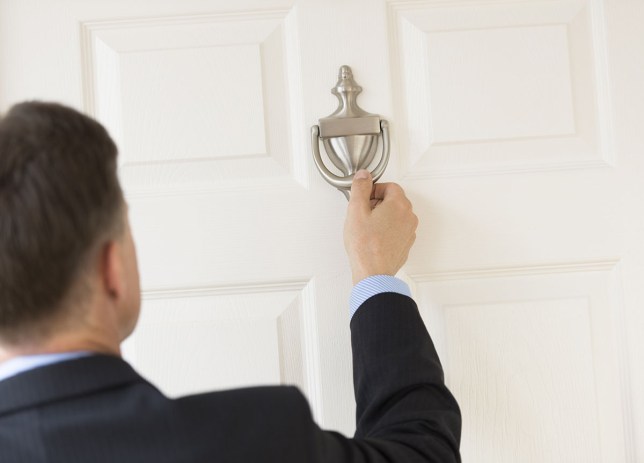 Do you remember when you were a child and ran away after knocking on the door of your neighbor’s house? This might be a favorite game of yours, but it is a crime in Britain.

Under the 1839 law, it is a crime to 'willfully and wantonly disturb any inhabitant by pulling or ringing any doorbell or knocking at any door without lawful excuse.’

10. It is Illegal to Die in the Houses of Parliament 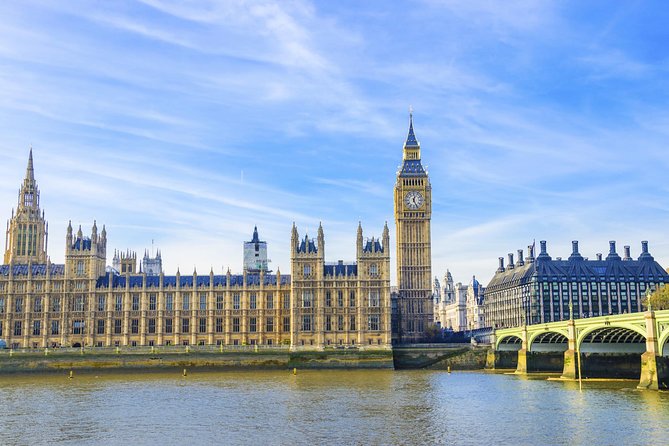 11. Pregnant Women is Allowed to Urinate Wherever She Wants 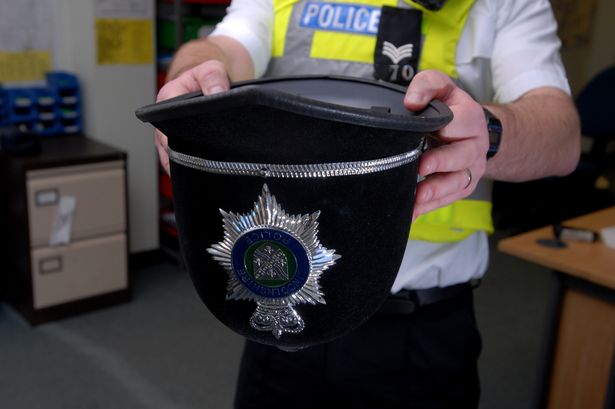 This is not a weird British law, but a perk for pregnant women. Do you know a pregnant woman can also urinate in a policeman’s hat? Men are allowed to urinate in public but only on the rear wheel of a car. And non-pregnant ladies who are jealous of this law become pregnant or puff out the stomach and act like a pregnant lady. 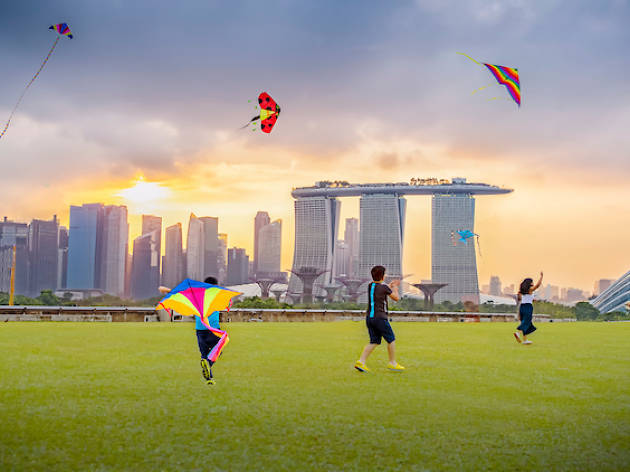 Then where should you fly kites? In a room? How weird is this British law!

Under the Metropolitan Act 1839, flying kites in public are against the law. Anyone caught doing this is liable to receive a fine up to £500. Public places may include parks. It is permissible in Hyde Park but with certain rules. Here are some countries that celebrate kite festival in unique ways, and of course you can fly kites wherever you want.

13. Singing Happy Birthday in Public is an Offense 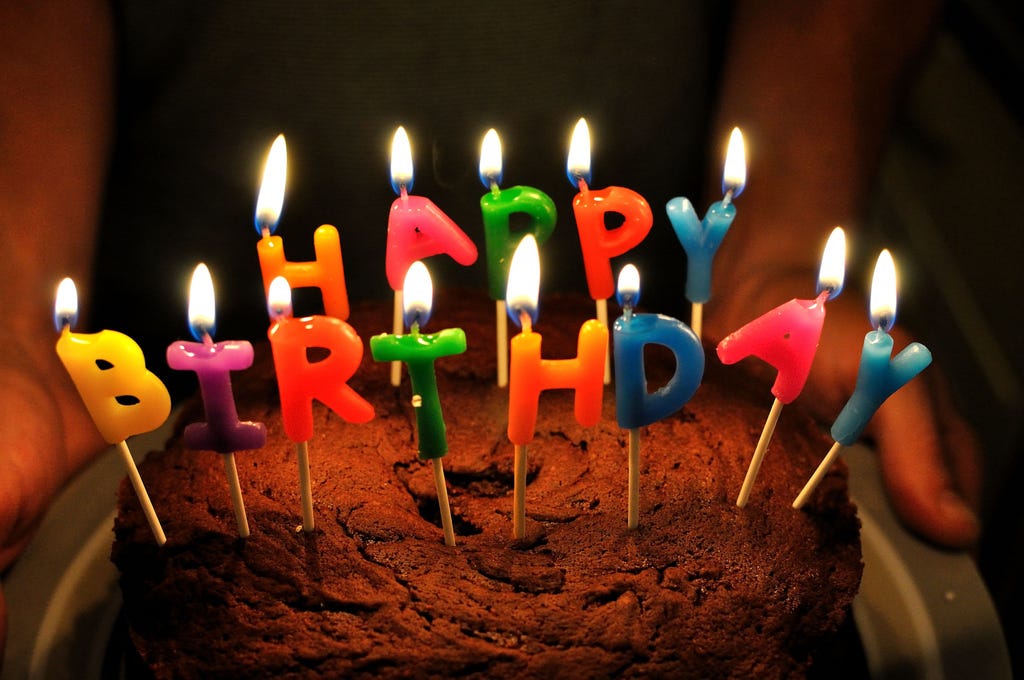 Do you know any alternative to Happy Birthday Song? If no, then find a new song to wish your loved ones. Happy Birthday is sung by millions of people from around the world.

The song is under copyright if used for commercial purposes. It is the most famous song in English and earns £1.2m a year in copyright fees. Many restaurant owners ask their guests to sing alternative birthday songs to avoid penalties (royalties).

14. It is Illegal to Cause a Nuclear Explosion 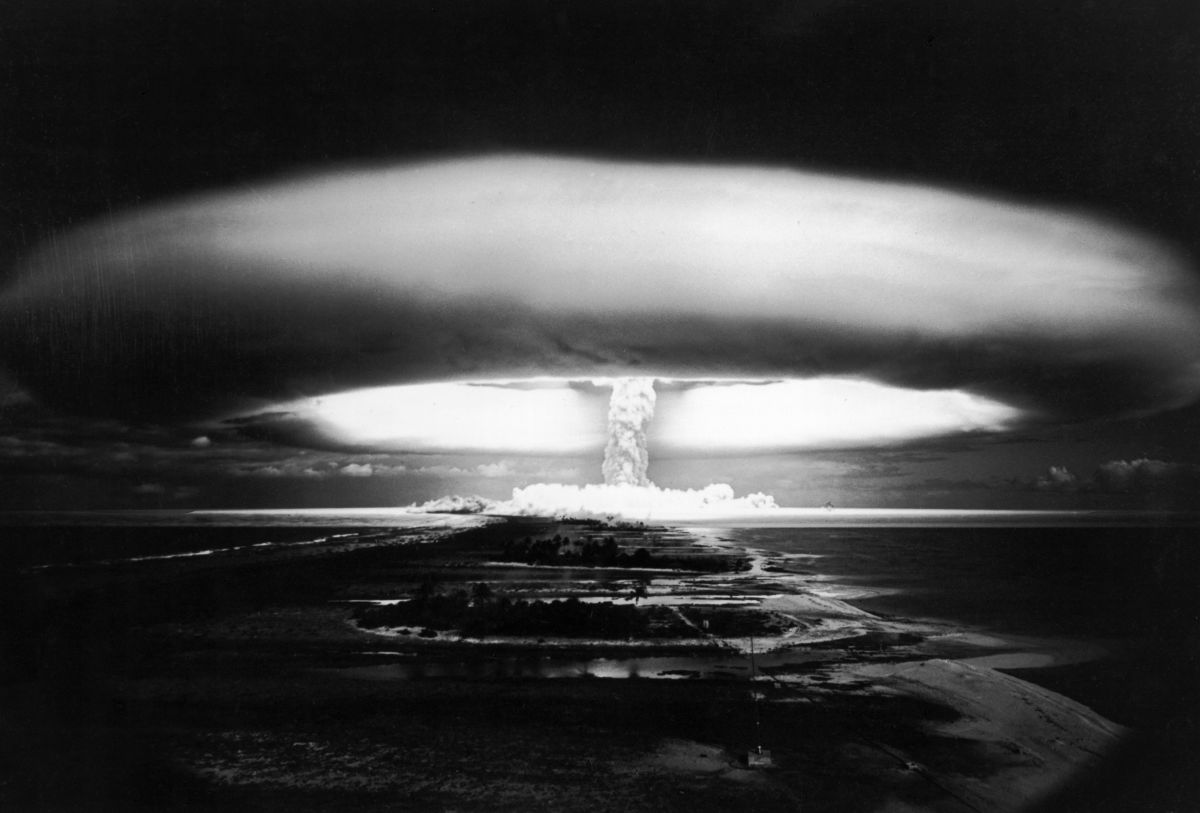 This is one of the best British law I have ever read. It shouldn’t be prohibited only in Britain, but in other countries too. The detonation of a nuclear weapon for tests or any reason is punishable. You could be imprisoned for life or receive a huge fine.

15. Playing Football on the Streets is Strictly Prohibited

Never commit this mistake of playing football on the streets if you are in Britain. Under the Metropolitan Act 1839, it is an offense to play any sport on the street that can annoy the residents. So, kids playing outside your door can be fined.

16. You Can’t Choose to Become a Soldier in a Fancy Dress 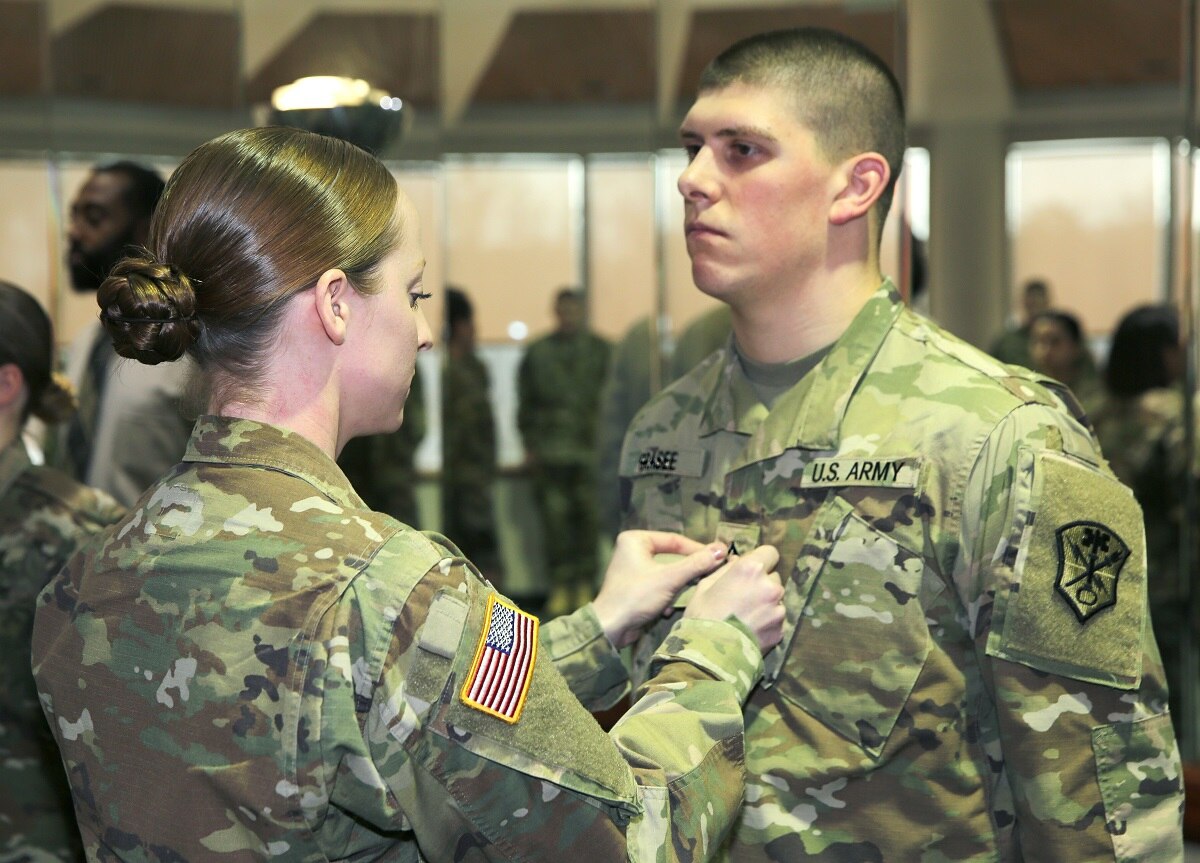 According to the Seamen’s and Soldier’s False Characters Act 1906, dressing up in soldier attire is prohibited in a fancy dress. This could land you in jail. The law states that it is an offense to ‘impersonate the holder of a certificate of service or discharge.’

Other than a soldier, several uniforms can be worn on fancy dress. You better decide which is better - a soldier uniform that can send you in jail or wearing a funky dress that can make everyone laugh.

17. Never Ask a Stranger for the Parking Money 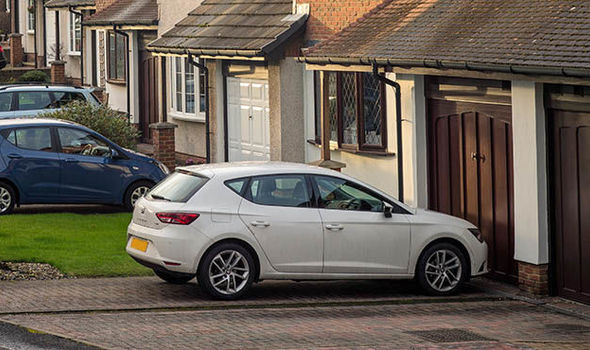 This might have happened to you. You have parked the car and do not have the cash to buy the ticket. If this happens in Britain, do not ask a stranger for a change.

Under the Vagrancy Act 1824, this means begging, and you could spend a few days or months in the house of correction. Is helping somebody a crime?

If you are planning to move to London or want to explore it on your vacay, you better know these weird British laws that are still followed. Also, know about the things that are banned in foreign places and can put you in prison.

You might find these British laws shocking, but these laws implemented in the US are worse than you can ever think.

Which of the above rules do you think should be repealed? Have you ever been to Britain? Did you break any rule unknowingly? Let us know in the comments.

12 Most Bizarre Animals You May Have Never Spotted Around You