Check out these metro systems from around the world that help people to reach their destination in less time.

Over the years, several technologies have been launched and are making work easier. Right from modes of transport to portable toilets, these modern equipment are helping people in doing more work in less time. Rapid urbanization around the world has constructed new metro and subway systems.

Transportation has also evolved and requires a different environment for travel. For instance, there is public transport like the metro that operates in a closed system. Water transport uses sailboats or other over lakes and canals.

Earlier, people used to travel on bullock carts and horses and reach their places in weeks or months. Today, transports like metros can help you reach anywhere in less time. From the circular line of Glasgow to the metro system with phone services and Wi-Fi, this mode of transport has become a convenient mode for everyone.

Let us find out popular metro systems from around the world that have become a favorite mode of transport for residents. 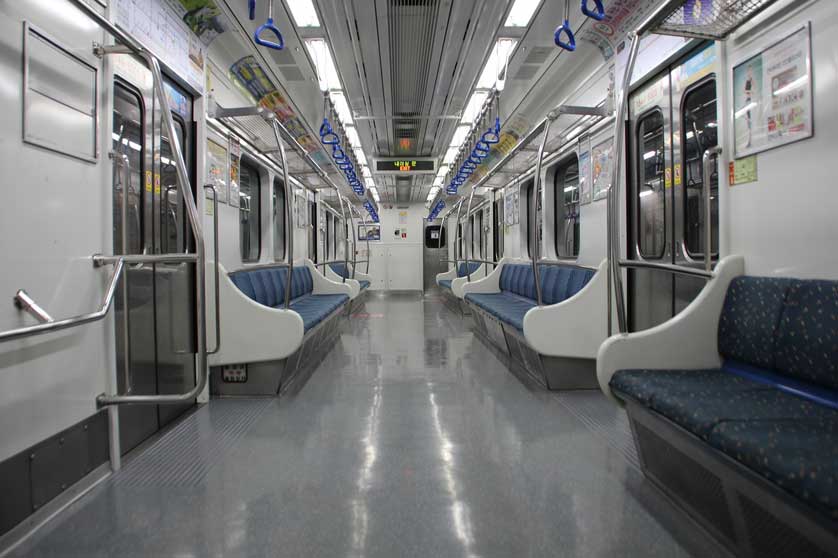 It serves the longest subway system in the world. Operated by three companies, this metro system carries over 8 million passengers every day on nine lines. It consists of light metro commuter rail, 23 rapid transit, and automated people mover lines. It serves metropolitan areas and satellite cities in Gyeonggi province. The first line of the Seoul subway was constructed in 1971 using the cut and cover construction method.

The directional signs in the system are written in English, Hanja, and Korea. It uses colorful LCD screens at stations to display subway arrival times. Furthermore, it is the only metro system with Wi-Fi and cell phone service.

The subway system operates on a unified transportation fare system, meaning buses and subways are treated as one when it comes to fare. Payments are handled by Cash Bee and T-money, which can be used in stores and other retail places. 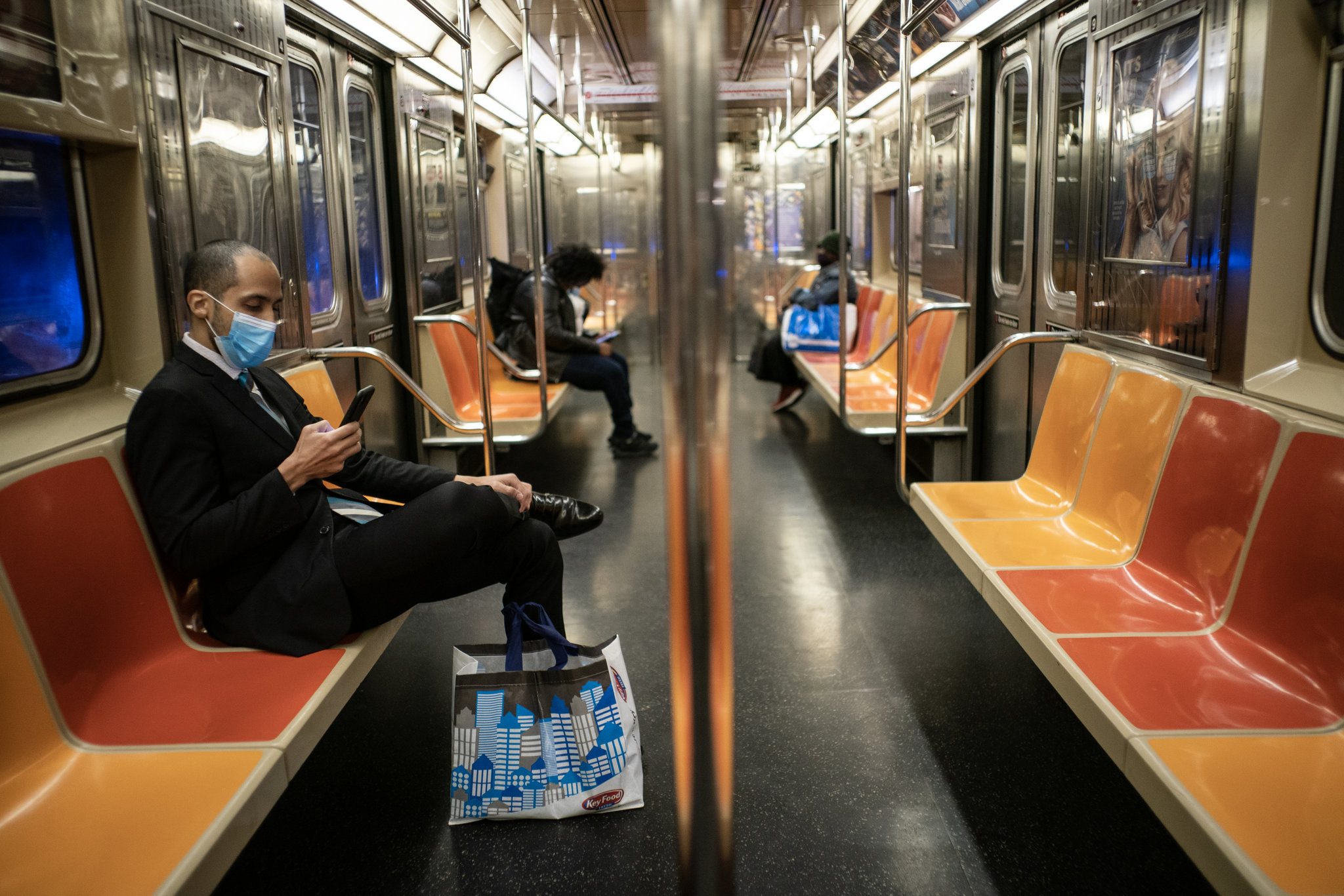 Currently, this metro system is the 5th largest subway system with a route length of over 350 km. It is a rapid transit system owned by the City of New York. Opened in 1904: the New York subway has 472 stations in operations. It operates 24*7, but currently, due to a pandemic situation, closes from 1 a.m to 5 a.m. It is the busiest rapid transit system in the western hemisphere and western world.

In 2017, the subway system delivered over 1 billion rides, averaging 5 million rides every day. As of September 2020, all fares were paid by OMNY and MetroCard. In 1993, a fare system, MetroCard was introduced, which allowed people to use magnetic stripe cards that store the amount to be paid to the booth clerk and vending machine. It is operated within 28 lines and currently has more stations than other subway systems.

In the 20th century, the MTA (Metropolitan Transportation Authority) started multiple projects to improve the subway. It converted the BMT Canarsie Line to use communication-based train control, using a moving block signal that allows trains to use tracks and increases passenger capacity. Later, it also expanded the automation program in 2000 and 2010 to add other lines. The system uses automatic block signaling with wayside signals and provides safe operation across the whole system. 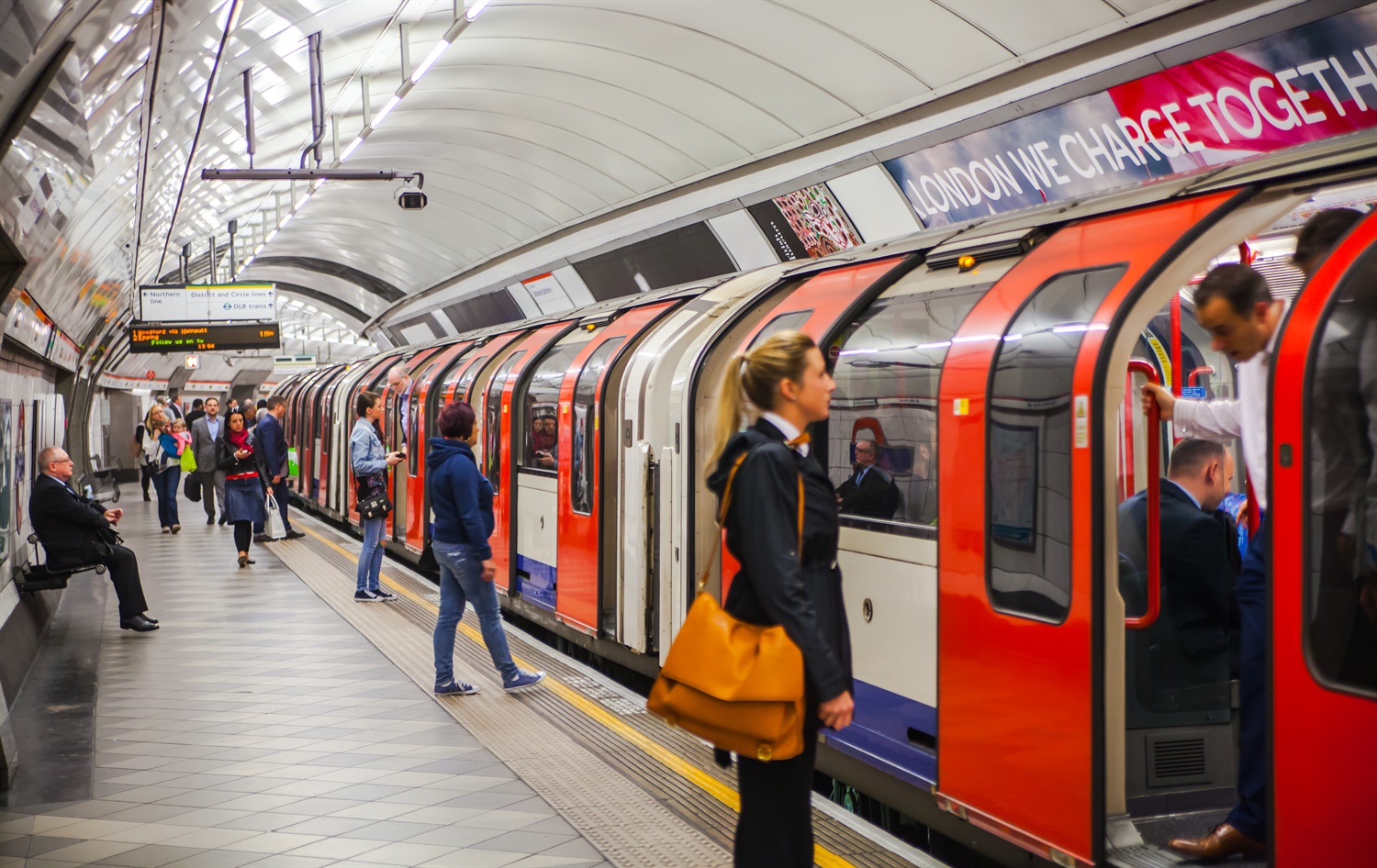 It was opened in 1863 for locomotive trains. Later, it became the world’s first metro system when electric trains started operating on one of its deep-level tube lines. It covers over 400kms with 270 stations across 11 lines. It carries 5 million passengers every day and has operated by Transport for London subsidiary London Underground Limited since 2007.

It is a rapid transit system that serves Greater London and a few parts of counties of Buckinghamshire and Hertfordshire in the United Kingdom. Riders on the subway can use Wi-Fi and air-conditioned carriages. The tube closes overnight during the week. The underground runs a service on Christmas Eve and does not operate on Christmas day. 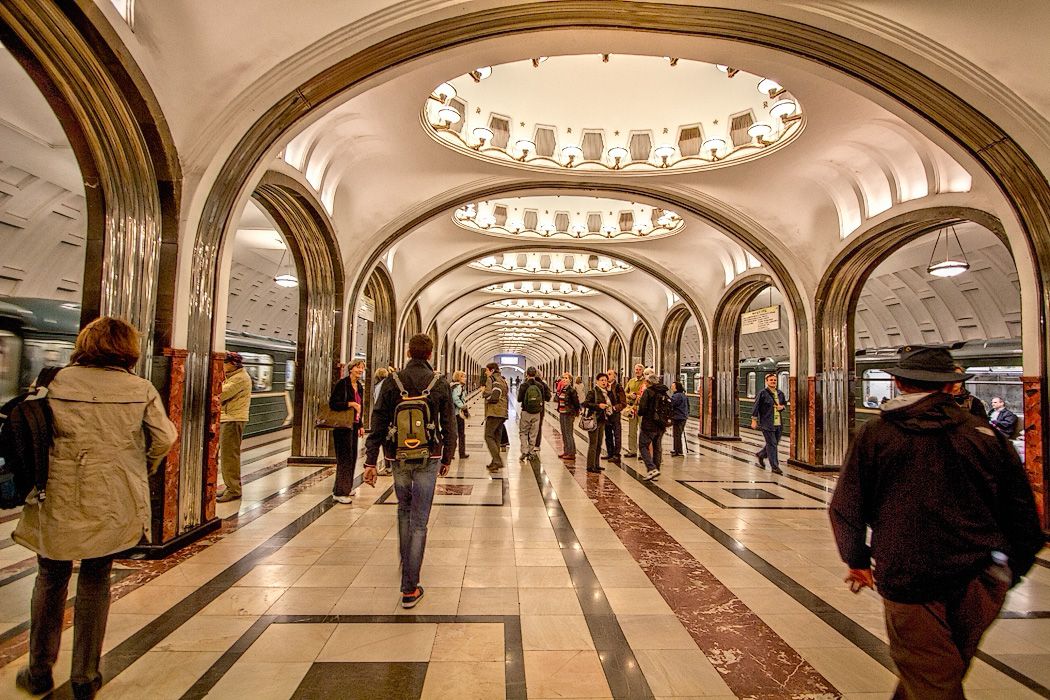 The Moscow Metro system serves Russia and neighboring Moscow Oblast cities of Reutov, Kotelniki, and Lyubertsy. Opened in 1935: the Moscow metro is the first underground railway system in the Soviet Union. It is the busiest metro system in Europe and also a famous tourist attraction. In 2017, it was recorded that the metro carries 7 million passengers every day.

It covers 232 stations. Out of which 123 are shallow, five are elevated, 12 are surface level, and 88 are deep underground. You won’t believe it, but the stations being constructed were meant to be the palaces of the people. They comprise beautiful architecture, detailed decoration, and mesmerizing chandeliers.

Next time, when you plan to visit Moscow, then don’t forget traveling and capturing the beautiful Moscow metro system. The majority of the Moscow stations open from 5.30 a.m. The metro stations can be identified with a large red sign M. You can capture a series of doors with Green signs showing access to the metro in Russian or English. The Moscow metro project is providing a quick transport option for the people of Moscow and helping in the development of the ring railway system. 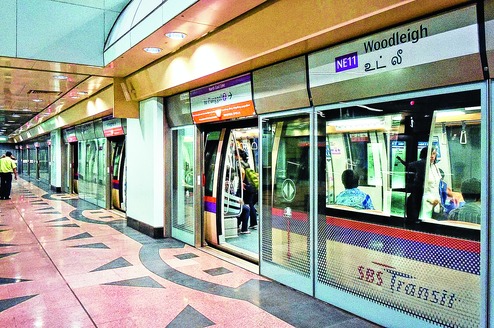 This metro system is built, operated, and managed under the hybridized quasi-nationalized framework called the New Rail Financing Framework (NRRF). It is the busiest and oldest rapid transit system in Southeast Asia. The train system is run by two public transport operators SBS Transit and SMRT.

It is recorded that SMRT has grown to nearly 600 million passengers every year. Singapore MRT is the fastest way to explore the city. Mastercard and Visa contactless bank cards can be used for the payment of public transport here. It is the economical way and the easiest way to travel around the city. 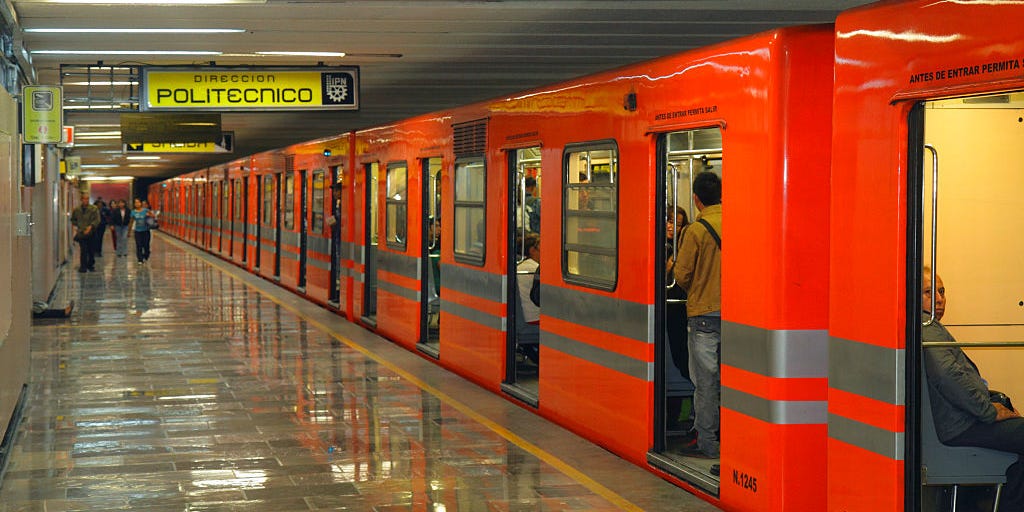 Officially called Sistema de Transporte Colectivo or STC is a rapid transit system that covers the metropolitan area of Mexico City. It serves 16 stations and opened to the public in 1969.

As of 2015, the system serves 195 stations 12 lines & covers 225 km. Each line offers one service. Different colors are present on square-shaped station logos to help people reach their destination. The name of metro stations highlights people, places, and events that happened in Mexico.

A single ticket costing MXN 5 allows the passenger to anywhere within the system with unlimited transfers. Also, a discounted coupon of MXN 3 is given to students with limited resources, unemployed, and women heads of households. It offers free rides to older people, children under the age of 5, and physically impaired people. 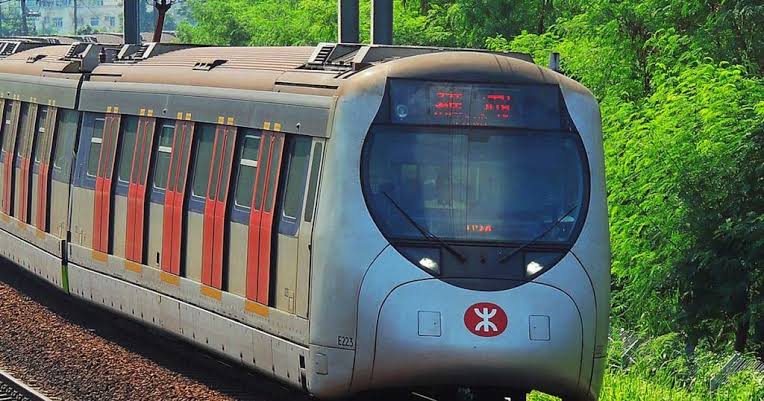 The Mass Transit Railway is a public network that serves Hong Kong. It consists of light rail, feeder bus service, and heavy rail, centered on an 11 line rapid transit network. It covers 230 km with 163 stations, 95 heavy rail stations, and 68 light rail stops. It is the most common mode of transport and carries over 5 million passengers every day. Operated by MTR corporation, a public-private company, the Metro generated revenue of $5 billion in 2013 and became the world’s most profitable metro system.

Construction of MTR began in 1967, and the first line was opened to the public in 1979. The fully modified initial system was opened in 1980 by Princess Alexandra  (a member of the British Royal family). Outsiders can easily use MTR and reach their destination, as the instructions and announcements are shared in English.

Also, the cost of service is low compared to other subways in the world. Depending on the distance you are traveling, the fare is charged from 5HKD to 60HKD. While traveling via MTR, you can enjoy cleanliness, high technology (Wi-Fi), and safety. Currently, there are 11 subway lines in Hong Kong. Airport Express Line, Kwun Tong Line, East Rail Line, are common subway lines used by travelers and locals. The majority of the lines here runs from 6 a.m. to 1.00 at midnight. 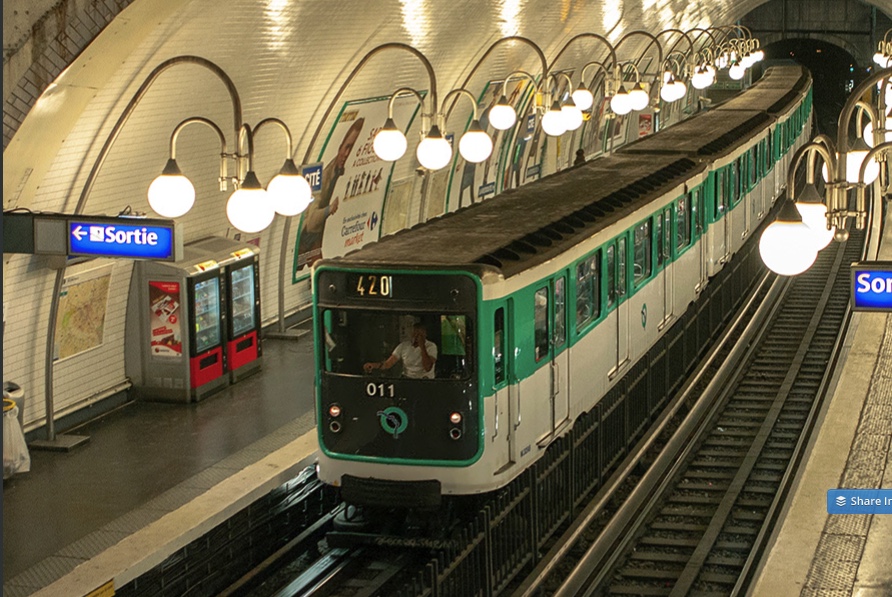 The Paris Metro is a rapid transit system in the Paris metropolitan area, France. It is popular for its uniform architecture and entrances influenced by Art Nouveau. It consists of 16 lines, has 302 stations, and is mostly underground.

After the Moscow Metro, Paris Metro is the 10th busiest metro in the world and the second busiest in Europe. According to reports, it carried over 1.5 billion passengers in 2015, which means over 4 million passengers a day. The first line opened in 1900 during the World’s Fair.

The metro was built to serve the city inside its walls; therefore, the stations are very close here. It is mostly underground, and the above-ground section consists of elevated railway viaducts. The Metro signage is M or the words Metro and Metropolitan. The subway opens at 5:30 am and closes at 1 a.m. for the single journey, you get a T+ ticket, and for weekly or monthly travel, you can have travel cards, Paris Visite and Passe Navigo.

The famous French civil engineer, Fulgence Bienvenüe, designed this beautiful metro to serve traffic in 1896. The construction started in 1898, and it was inaugurated in 1900. Paris Metro uses rolling stock, including MF (matériel fer) and MP (matériel pneu). 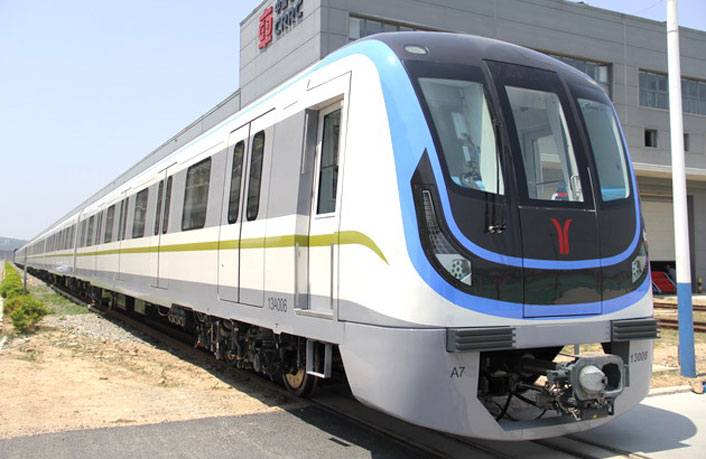 The Guangzhou Metro is the rapid transit system operated by the state-owned Guangzhou Metro Corporation and is also the fourth metro system to be built in China after Tianjin, Shanghai, and Beijing. This metro system owns 14 lines in operation with a length of over 500 km and nearly 300 stations.

In 2016, the metro’s operation was no.1, and the on-schedule rate was no 3. Line 1 comprises 16 stations and is majorly used to go to the local east railway station. Line 2 comprises 24 stations and runs from north to south. The common tickets included here are a deposit ticket, a single trip ticket, and Guangzhou Transportation Smart Card.

A single trip is used majorly by tourists and is valid for the day when you purchase. Guangzhou Transportation Smart Card can be used for ferry boats, telecom businesses, and other places in the city. 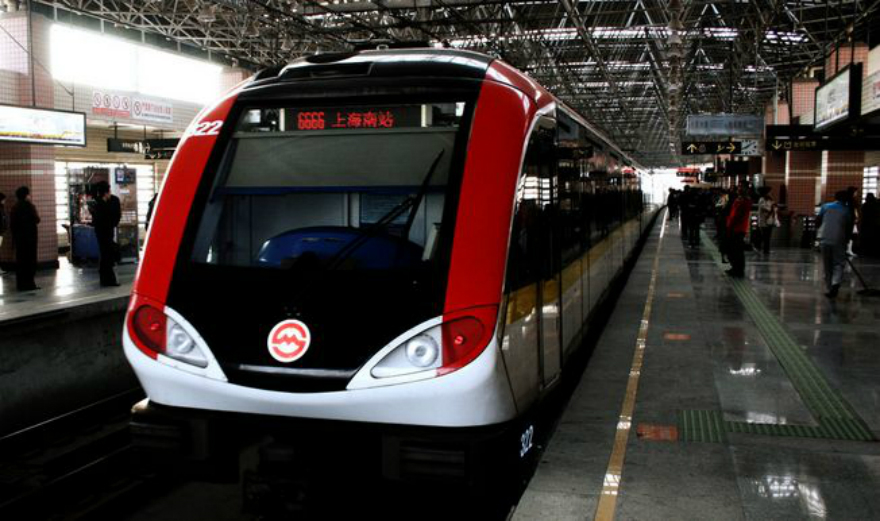 Shanghai Metro is a transit system in China that operates urban and suburban transit services to over 15 districts. Opened in 1993: the Shanghai metro is the third-oldest rapid transit system in China, after Beijing and Tianjin. It is the world’s second-biggest metro system by route length and also the second biggest in stations with 16 lines and 414 stations.

It is a safe, speedy, and convenient mode of transport for traveling around the city. It is considered one of the fastest-growing transit systems in the world and would be expanded to 22 lines while covering a length of 875 km by 2020.

Indeed! This mode of transport is making traveling easier and convenient for people. In the coming years, we would see enhanced modes of transport that would help people to reach their destination in less time.

Have you ever used these metro systems? How was your experience? Do you know which is the oldest metro system? Drop your comments below.