Scientists Have Identified A Brand New Organ In Human Body

Our body now has a new organ. Meet the brand new - MesenteryResearchers hav... 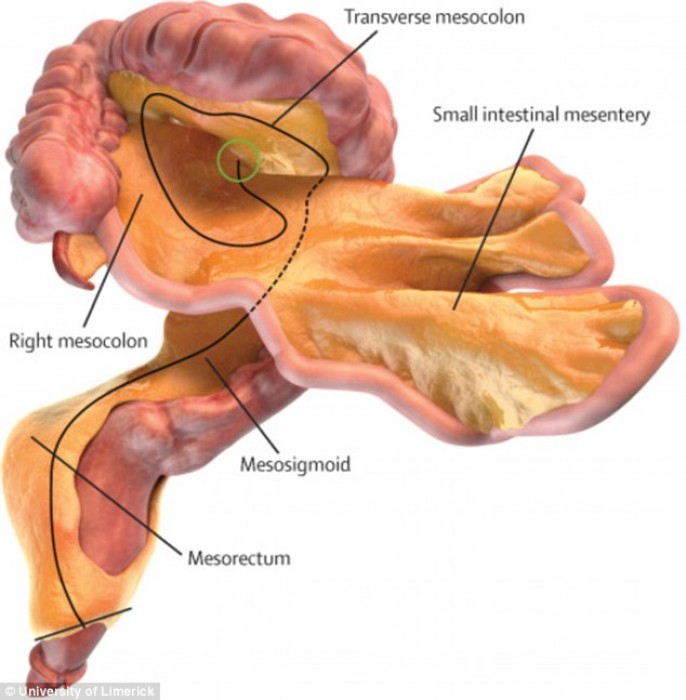 Our body now has a new organ. Meet the brand new - Mesentery

Researchers have discovered a new organ inside our bodies. It has been hiding inside our digestive system all this time. Although its structure is known but the functions are yet to be understood. A thorough study on this organ can be the key to understand and treat abdominal and digestive diseases.

Mesentery was long believed to be made up of separate structures (distinct membranes) but a new study has defined it as a continuous organ. According to the Mayo Clinic, mesentery connects the small and large intestine to the abdominal wall and keeps them at place. Interestingly, Leonardo da Vinci had already identified these membranes as a single structure.

Researchers from the University Hospital Limerick, Ireland with the help of complex microscopy showed that mesentery is a continuous organ. The evidence of this reclassification has been published in The Lancet Gastroenterology & Hepatology.

J Calvin Coffey is a researcher who first identified mesentery as an organ, confirmed the information published in the above journal. He further said that-

"The anatomic description that had been laid down over 100 years of anatomy was incorrect. This organ is far from fragmented and complex. It is simply one continuous structure."

Coffey also noted that all the anatomy books of 20th century described mesentery as a series of fragmented membranes that means different mesenteries are associated in different parts of intestines.

These findings have also led to updating the new definition in the world’s best known series of medical textbooks – Gray’s Anatomy.

So, what is mesentery? Mesentery is a double fold of the lining of abdominal cavity, known as peritoneum. It attaches our intestines to the walls of abdomen and keeps everything in place.

Even after da Vinci’s descriptions, doctors had been ignoring the information, considering it to be insignificant since a century. But Coffey and his colleagues identified the mesentery as a continuous structure in 2012. For four subsequent years, they gathered further evidences to actually classify this structure as an organ and make it official.

The organ is illustrated below-

The reclassification of this structure does not change anything inside our bodies but it gives a whole new field of medical science that can aid in better health outcomes. After recognition and structure of this anatomy, scientists can now focus on learning about its functions and the diseases associated with mesentery.

The continuous nature of mesentery may also serve as a means of spreading diseases from part of the abdomen to another, as stated in the review.

The authors of the review also noted that many anatomical and other features of the new organ also need to be described. These include areas like what body system shall mesentery be classified in?

"Whether the mesentery should be viewed as part of the intestinal, vascular, endocrine, cardiovascular or immunological systems is so far unclear, as it has important roles in all of them," the authors wrote.

This study and the studies that will be conducted in future shows that no matter how advanced science becomes, there is always more to discover.

The research has been published in The Lancet Gastroenterology & Hepatology