Only An Avid Photographer Can Do This Russian photographer Daniel Kordan wanted ... 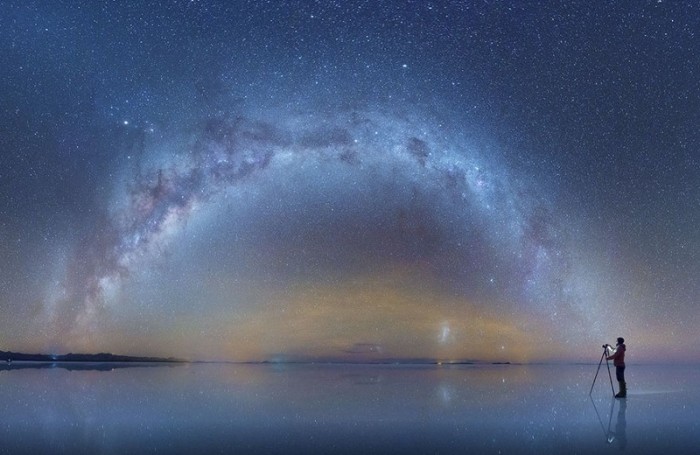 Only An Avid Photographer Can Do This

Russian photographer Daniel Kordan wanted to capture few photos of dark sky. So he travelled to the world’s largest salt flat Salar de Uyuni in Bolivia. Salt flats are known for their overwhelming dreamy beauty. Taking pictures from a special astrophotography camera, Kordan captured the Milky Way at night that was reflected on the flooded salt flats.

The photos are spectacular. The Altiplano region of west central South America is known for being absolutely dark. It rises 12,300 feet above sea level. Kordan was unable to see anything. He could only feel his car driving in through water and salt. It was a feeling like floating in open space.

“Our spaceship is parked in a distance, and stars are blinking with blue, red and yellow colors. You stand in the deep night with stars above you, aside from you and underneath!”

Kordan’s camera unlocks more and more colors in the sky and allows the reflective Milky Way to glow onto the flats. Daniel Kordan described the view as “Space on Earth”. The luminous glow of the Milky Way galaxy looks like a dreamy place. In case you are looking forward to an inspiring vacation, Daniel Kordan is currently headed to Faroe Islands and Greenland to conduct workshops on how to capture magical landscape.

All photos captured by Daniel Kordan

15 Powerful Photos That Will Break Your Heart