More than a million South Sudanese refugees have crossed the border into neighboring Uganda since civil war broke out in South Sudan in 2013. And, they began living in refugee camps. One of them is Bidi Bidi- the world’s second largest of all refugee camps. 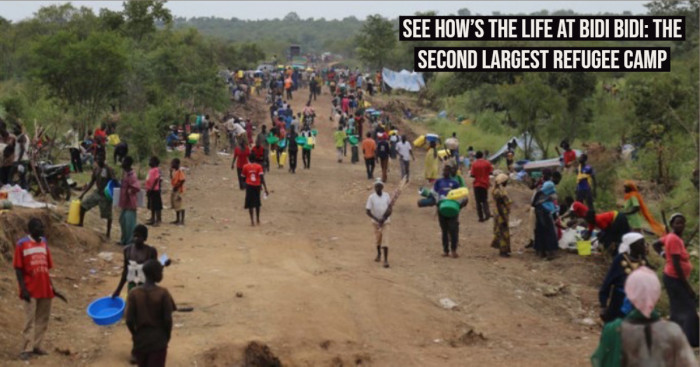 Not many of the people have heard about the Bidi Bidi. And one of the reasons behind it is that a few months ago, it even didn’t exist.

But now it exists. Yes, after the Rohingya camp in Bangladesh, it has become the second largest refugee camp in the entire world. Not much time has passed but, in this summer only, it was a huge, empty, arid patch of land nearby the small Ugandan border town of Yumbe. Although, now it is home to around 280,000 refugees. It is reported that most of them have fled the violence and upheaval in South Sudan.

How Bidi Bidi Came into Existence?

South Sudan has been riven by civil war for the last five years now after President Kiir accused his deputy of launching a coup. After that incident, around 300,000 people have died, and about 3.5 million have become refugees since then. Also, many of them fled to neighboring countries for the sake of Life. And from that many, some have also come to south into northern Uganda into refugee camps. And as mentioned above, Bidi Bidi has become home to more than a quarter of a million people.

How They Reached There and What They Do for Survival? 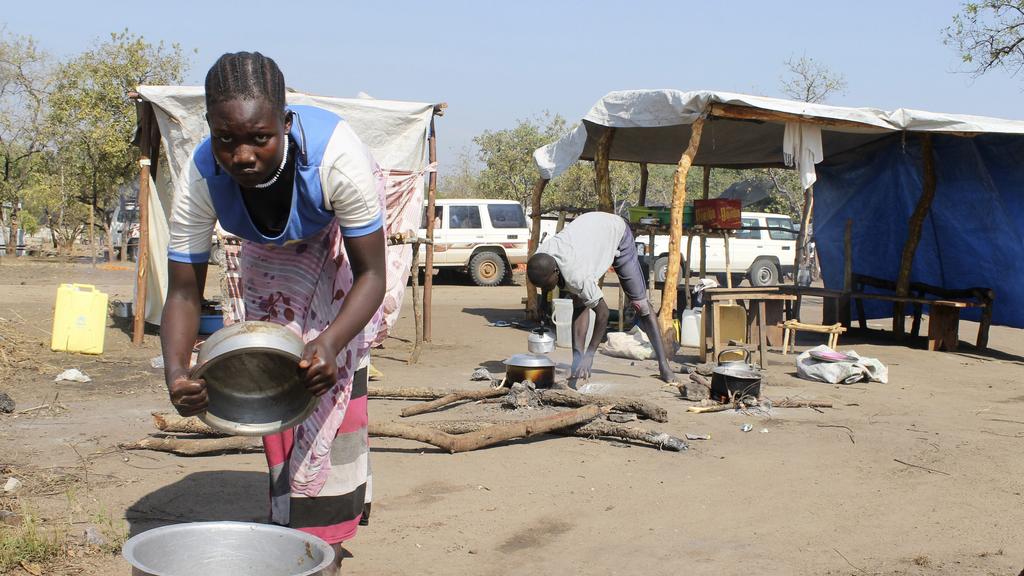 Not only to us but many people in the world it is an assertion that when it comes to refugees, Uganda is the most welcoming country. Throughout the day, adults plow the land that the community and government provide them for free. Some of them started to volunteer with numerous NGOs, while others own some of the small businesses that are transforming the forest once infested with scorpions and snakes into a mini-city. Also, the children from that area go to school to prepare for a future they hope will be far better than the life they escaped.

Well, these people had to walk several miles through thick forests to reach the camps. It was a hard journey when they jumped over dead bodies to somewhere safe. Also, they have hurried to bury their loved ones in depthless graves which is strictly against their culture. Also, to reach the border safely, they have traded their possessions as rent for rides in old, grunting cars still they were not sure that they would reach the border or not. Further, they traversed the lakes and rivers in rickety canoes. And, somehow they survived.

Well, Bidi Bidi received thousands of refugees every day based on fresh fighting in South Sudan in 2016. Covering more than 100 square miles the settlement has swelled to the size of the city of Birmingham. 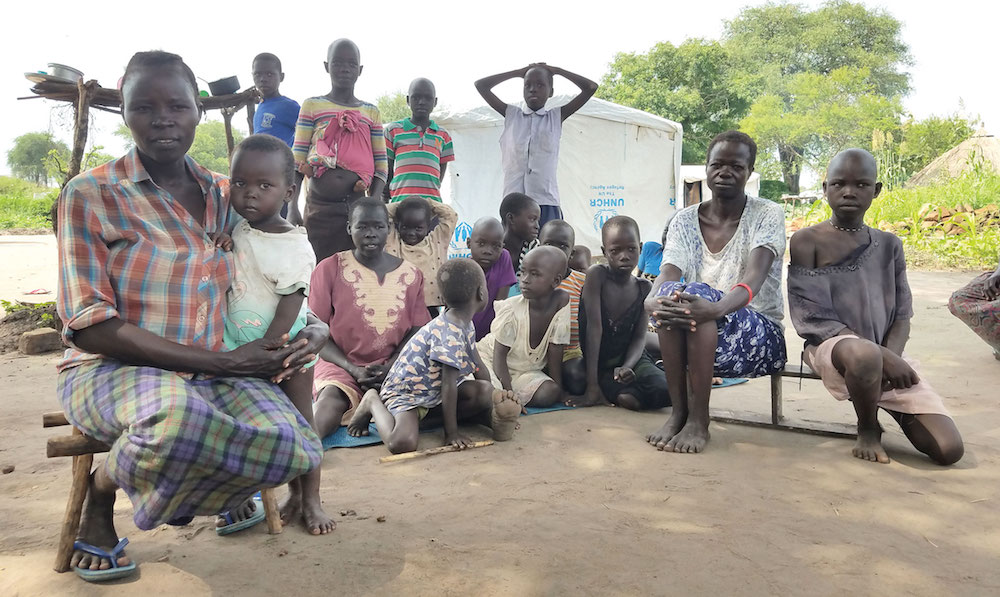 Many people struggle to eat even. The kitchen fires of the camp start to die down soon as evening draws in.

Some of the people mentioned about their dinner. Like Betty Dawa, one of the residents told that the fire of her place is lukewarm which is used to prepare the only meal of the day and, i.e., posho (dried mashed maize) and beans for her two children and husband, Julius Wani. Wani also volunteers a local NGO with Fahard that partners with the UN’s Food and Agriculture Organisation. They say they started singing about the kindness of God and dancing in circles and neglect the odor of beef cooking in the neighbor’s kitchen.

“We do not have much but we have a lot. We have love and we have our culture.”

Also, he keeps his children busy to do their homework into the house just before his “bros” arrive.

Here the bros refer to the group of South Sudanese men who have defeated ethnic tensions that means the conflict between South Sudan’s 60 ethnic groups which resurfaced during the civil war and now consider each other to be blood brothers.

Well, this is one example, but yes, apparently this is how they all live there. 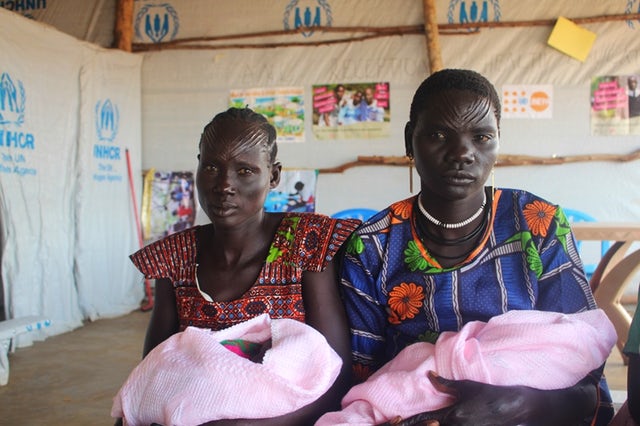 A 16 years old Jemma, one of the refugees living in Bidi Bidi, who is also from South Sudan’s Yei state told her experience.

She said women and girls escaping conflict faced a severe risk of sexual violence and death as routes out of the country remain unsafe. According to a UN survey conducted out in camps in the capital of South Sudan, Juba, they found that around 70% of women are raped since the conflict began.

Remembering the consequence of the attack by armed men, Jemma said,

“We were left few in number.”

“We spent one night where we were attacked by wild animals. I was bitten by a snake.”

Now, Jemma is living with a foster family in Bidi Bidi for the past year.

“Life isn’t easy.
Currently, I don’t know where my parents are. We left my father in Juba but for now, we don’t know where he is. Or my mother…we left her in Kampala [Uganda’s capital] doing her business.”

Further, she stated how women there struggle to cope, particularly when they are on their period because essentials such as sanitary pads are hard to come by.

“Whenever you’re on your period and you have no pads, you don’t feel comfortable.
You don’t feel like going to school.”

However, Jemma appreciated an independent development and humanitarian organization Plan International which has been running activities in Bidi Bidi camp to give young people like Jemma a chance to forget their troubles. To help girls and women in the camp, they are distributing necessities such as sanitary pads, clothes,  and soap to thousands of female refugees.

“My living situation is getting better because I’ve been supported by Plan International which has made me think less about the bad things that happened.”

About Plan, she said,

“Plan has provided us with space where we carry out activities like netball, football and volleyball. We also do drama, music and dance. Whenever I play sport, I feel relaxed. I don’t think of bad things. I feel happy.
I was lonely but I’ve made friends through Plan International. I’m not like how I was before. I feel changed. Mentally, I’m now okay.”

Like thousands of other refugees, Jemma and other girls go to school in the camp and, hope that one day they’ll be able to return to their country.

“My hopes for South Sudan are that everything will change from bad to good.
Here we are studying so that in future we can be the new leaders of South Sudan…making it a good country again.” 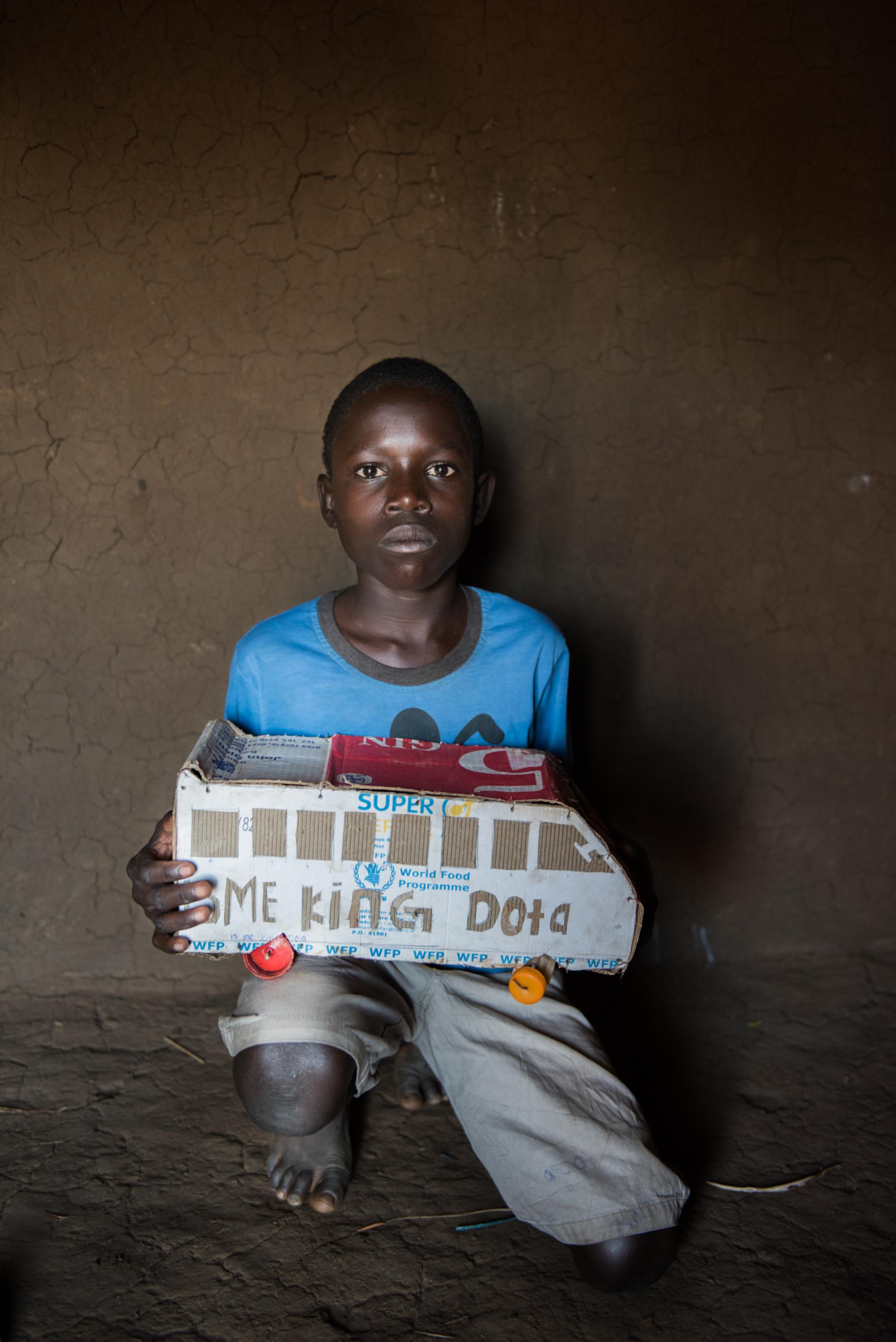 Building new lives in refugee camps, more than 1 million children have fled the country. Kids are innocent enough; they know how to be happy even after such heart triggering situations. And so did these children living in Bidi bidi. They made their toys and stuff to play happily. 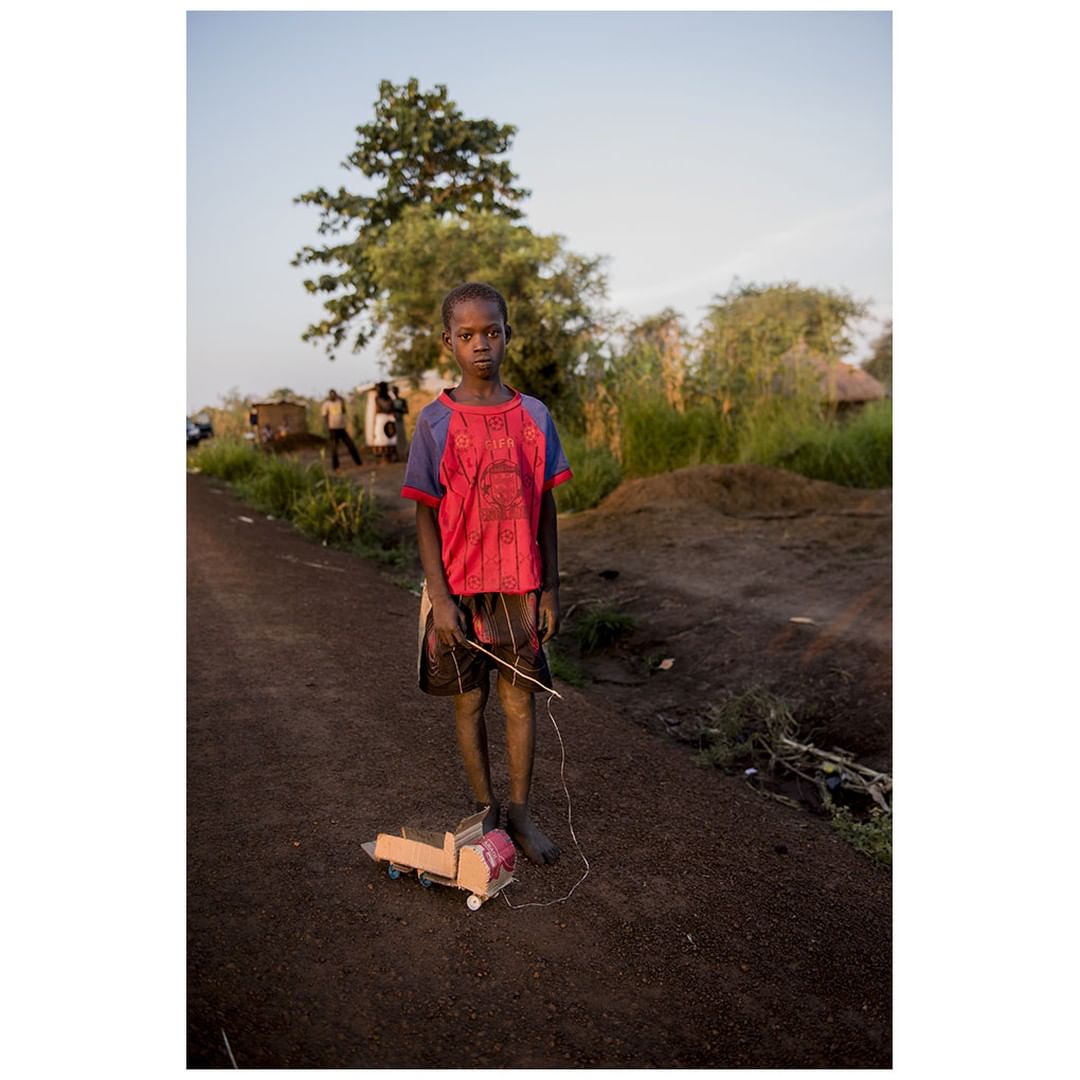 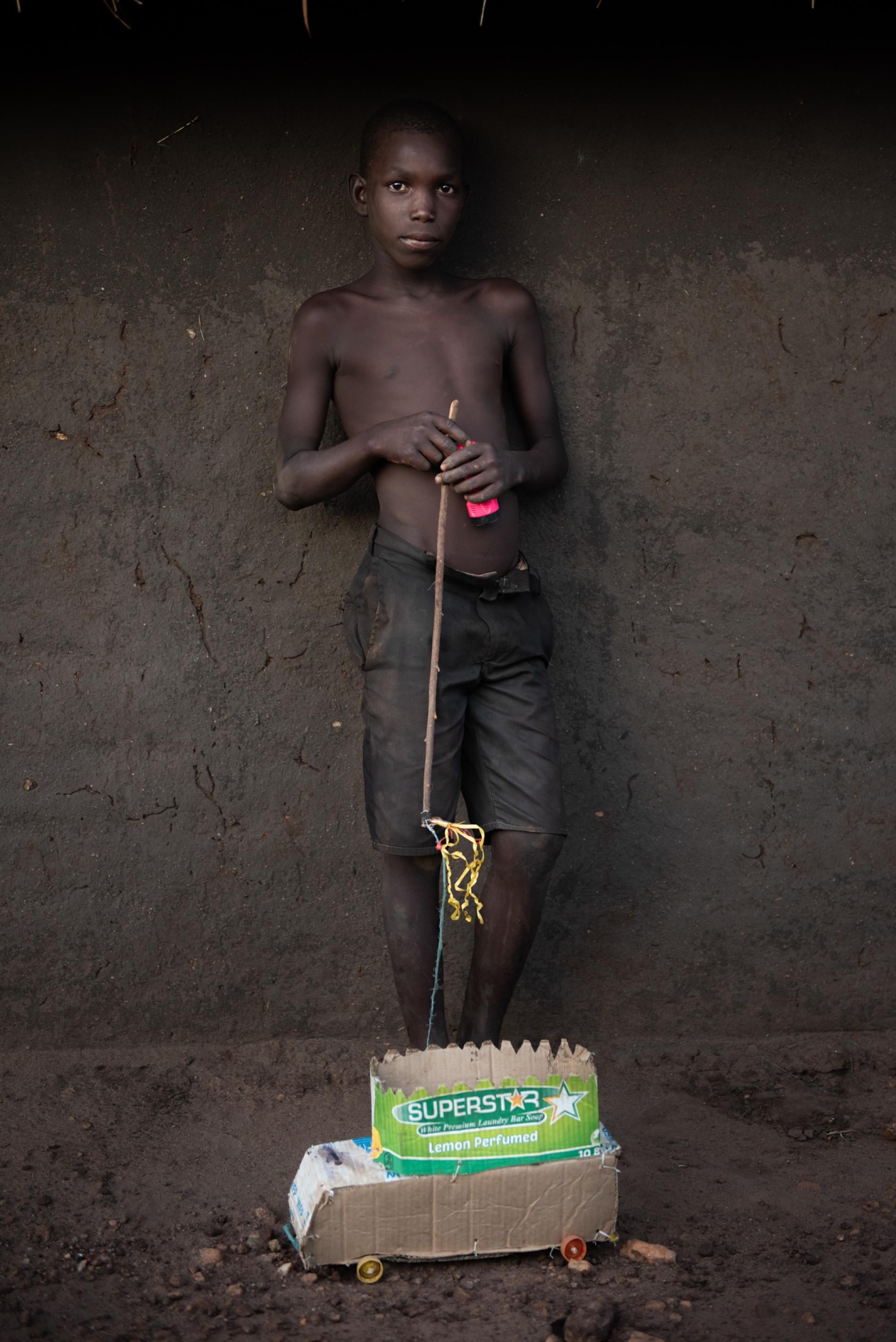 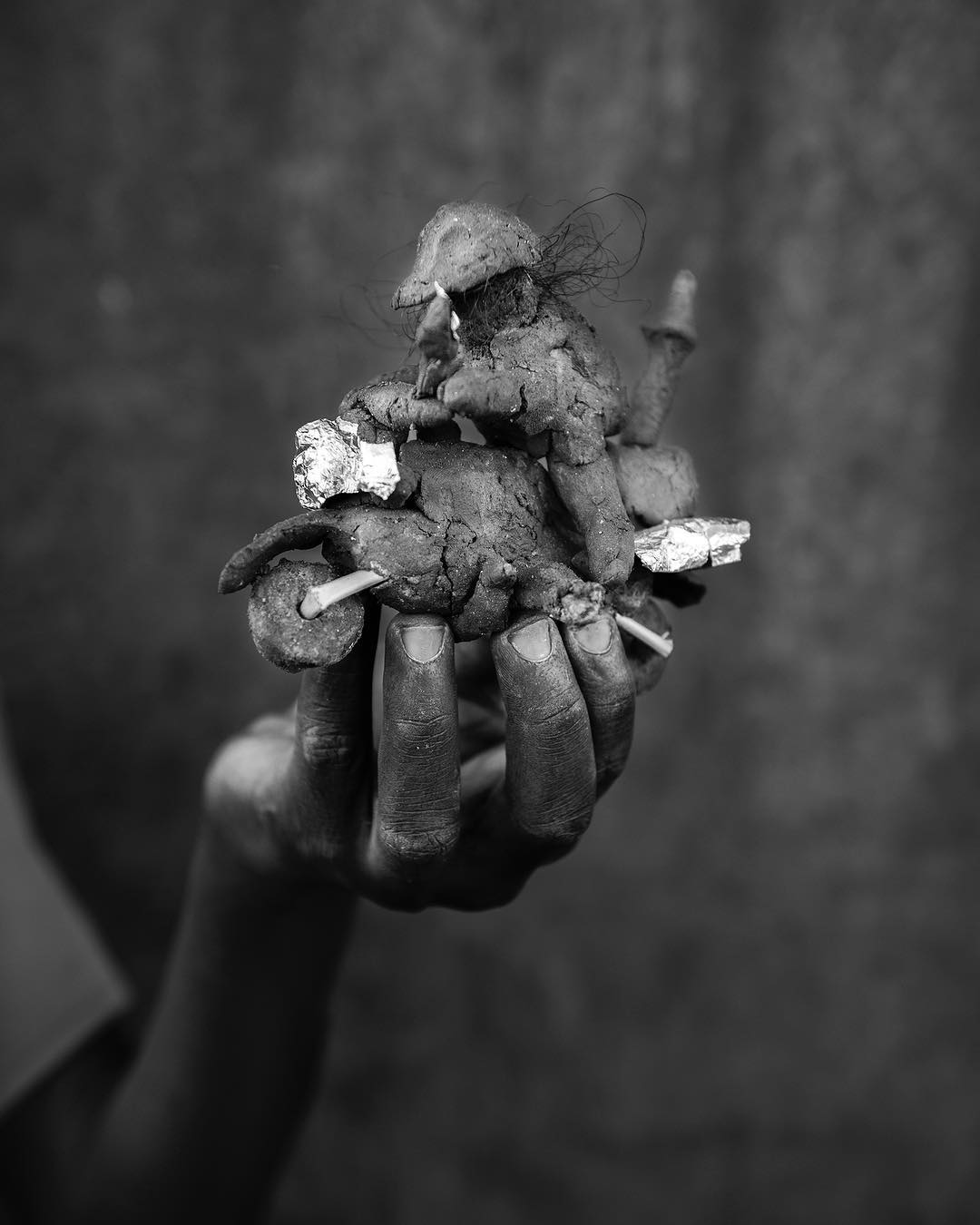 Like Plan International, one team of American Refugee Committee is helping people of Bidi Bidi. They are responsible for Zone 5 of the camp and provide providing support and protection to residents of Bidi Bidi. According to reports, they are offering post-trauma counseling, also working to prevent violence in the camp. Moreover, they are helping run the reception center of the camp because that is the place where every refugee first arrives at Bidi Bidi.

There are around 25 volunteers of ARC’s team in Bidi Bidi refugee settlement. Some of them are Ugandan, and some of them are refugees. The Ugandan volunteers came here for volunteering from all over the country whether from Yumbe which is just down the road or from Mbale which is 8+ hour bus ride far. Every morning, they visit the place and distribute themselves section by section to meet the community and help them understand and get them easy access to basic services.

Every day they meet refugee families and hear about their needs and requirements and also see small ways that they could make a big difference for Bidi Bidi residents.

Look at some of the illustrations of small projects ARC completed for the people who’ve found a haven at Bidi Bidi settlement. 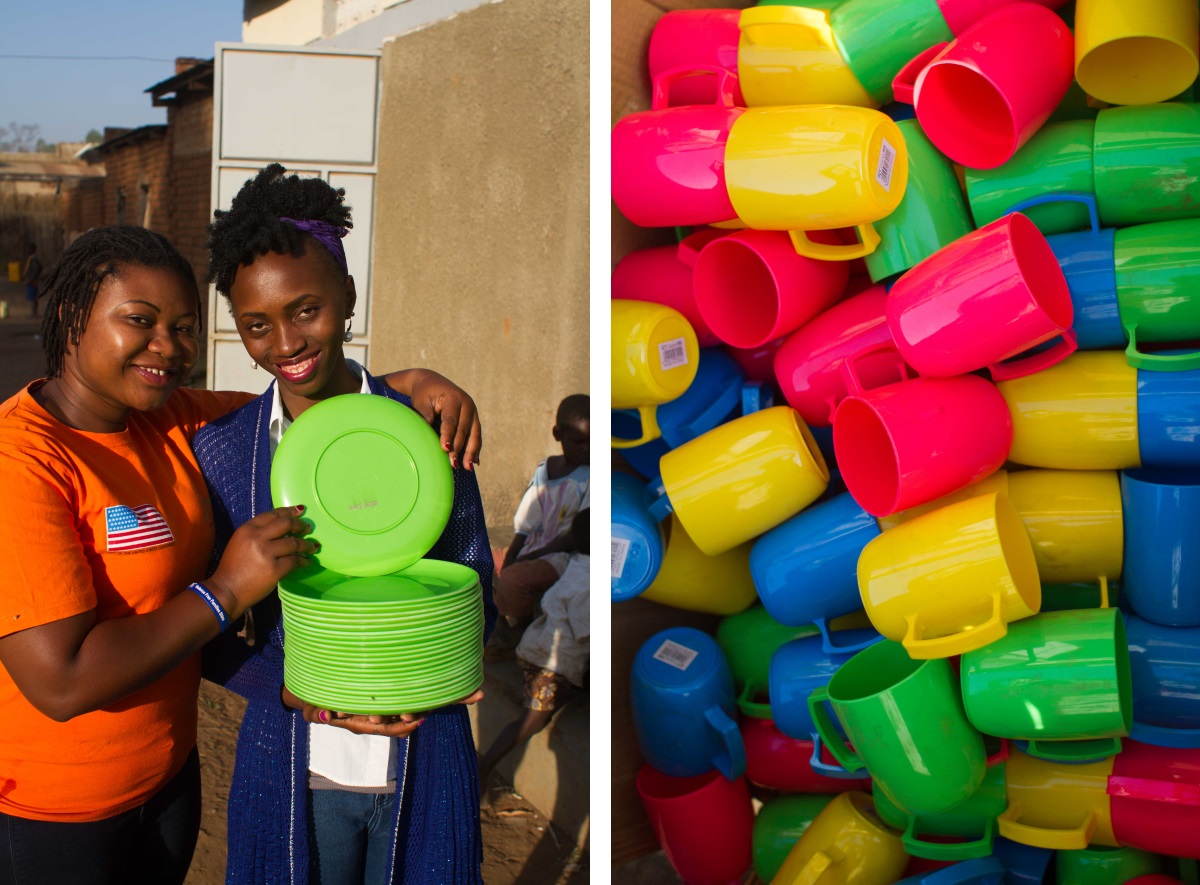 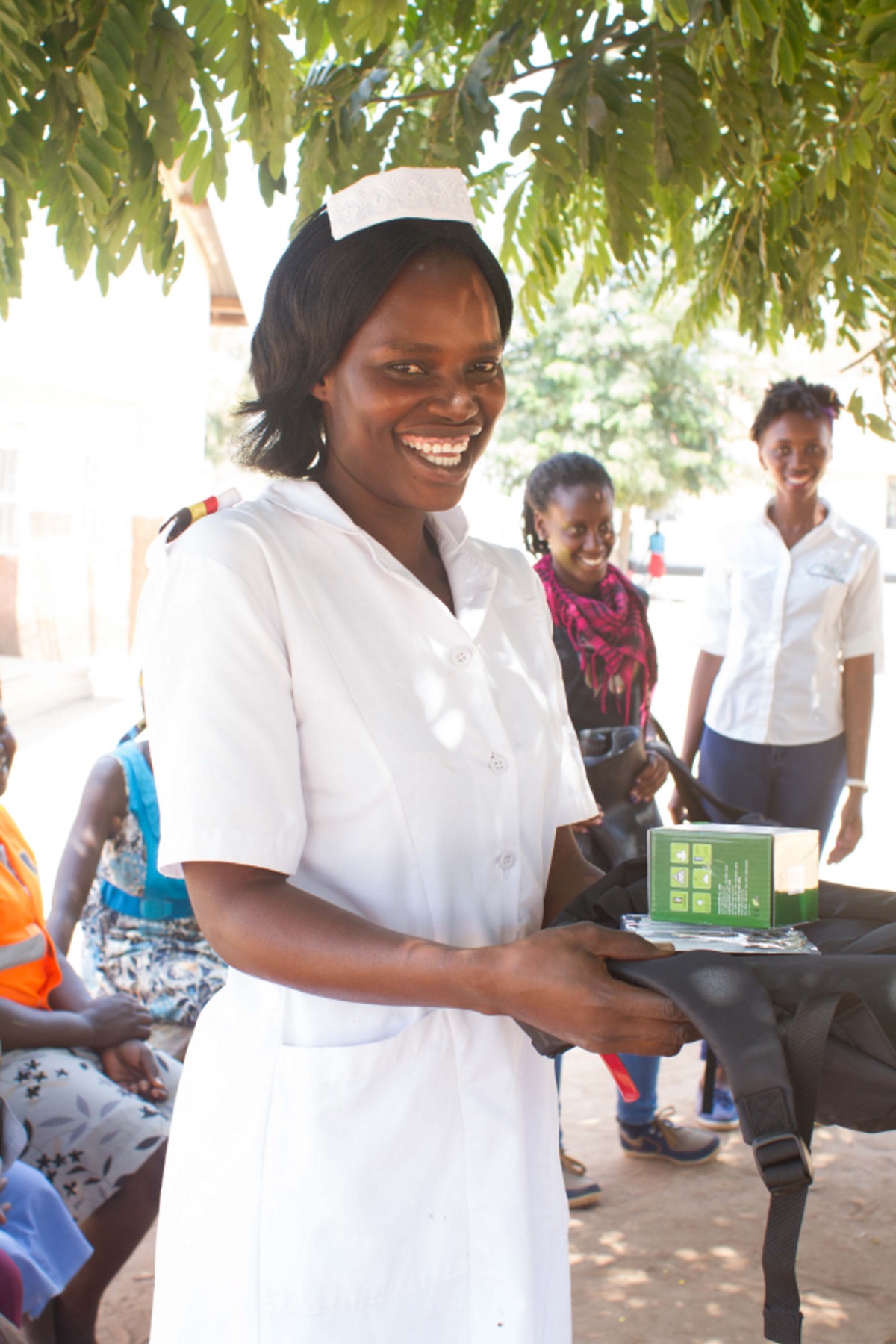 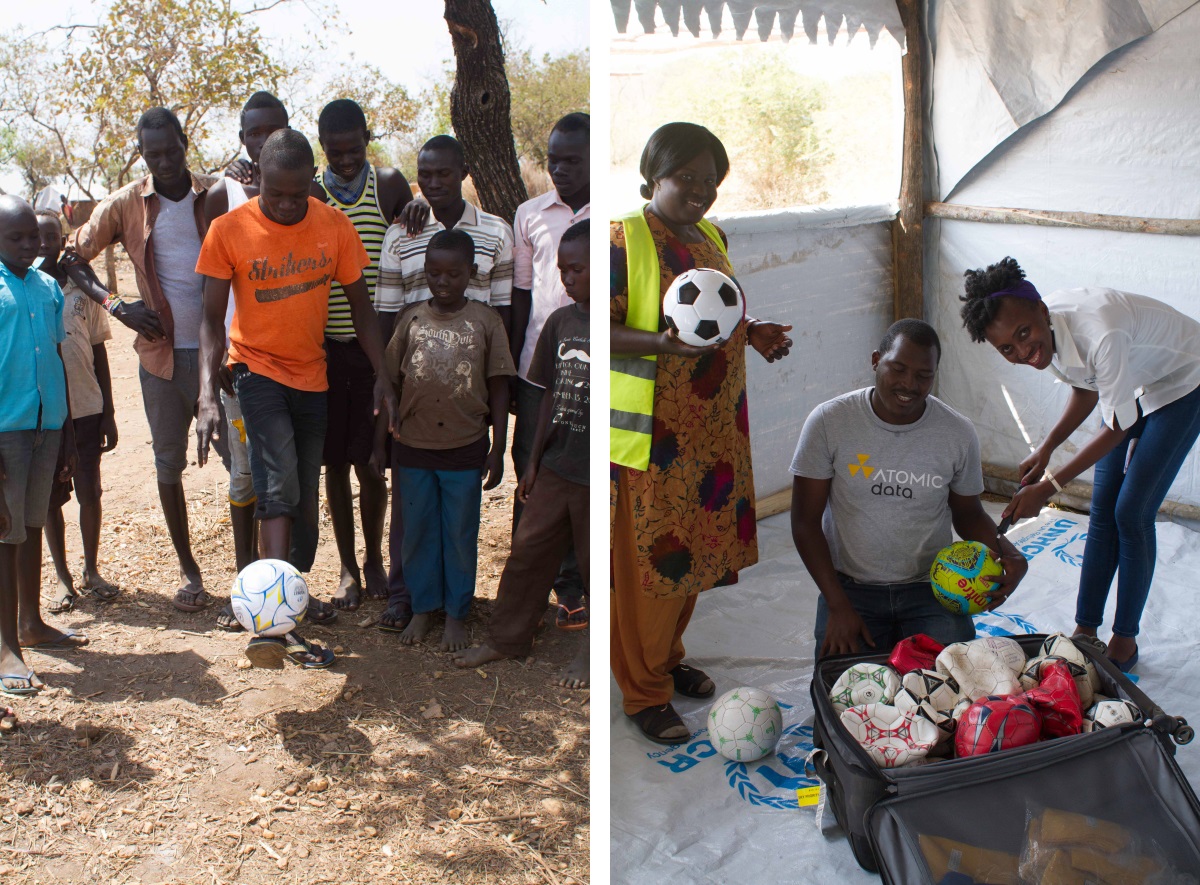 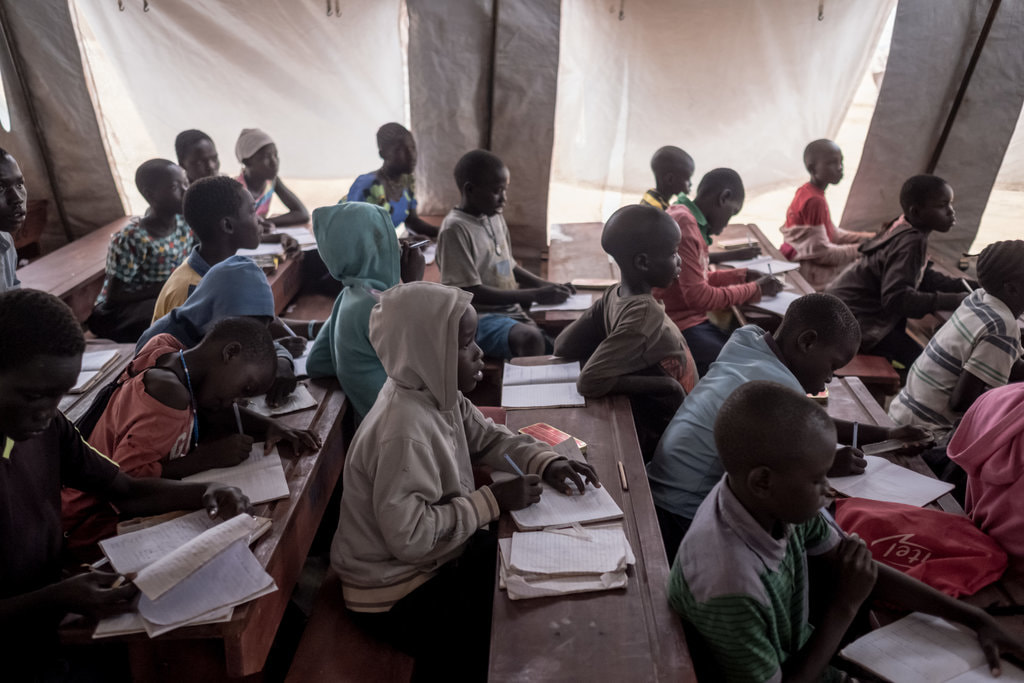 Also, Tracers- the Red Cross volunteers work regularly hoping to find missing family members in their allocated section of the camp. One of the Tracing assistants, 27 years old Agustin Soroba, has been working as a tracer since February 2017. He has his own story as he was himself departed from his family for five months after being kidnapped, beaten and forced into labor as an ammunition porter by South Sudanese soldiers.

Look at this picture of tracers Hillary Driwale and Agustin Soroba, traveling to the home of an unaccompanied 18-year-old girl attempting to locating her mother. 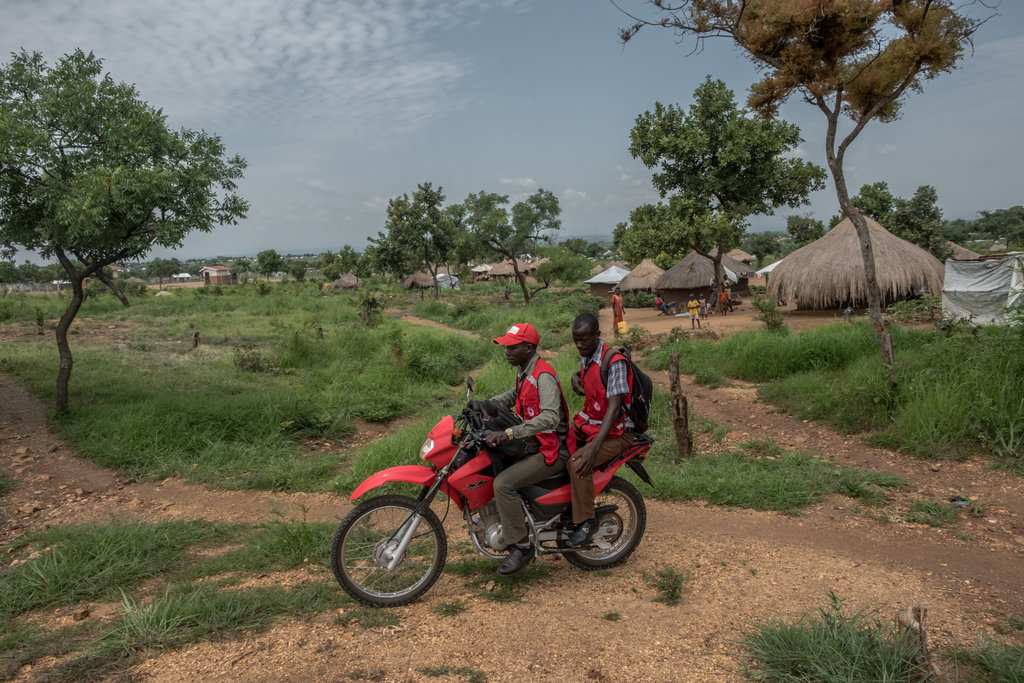 A British journalist Tommy Trenchard who lives in Cape Town Capital of South Africa also works as a photographer for some of the world’s leading NGOs like The Red Cross, Medecins Sans Frontieres (MSF), Save the Children, Oxfam, ActionAid, and the International Rescue Committee.

According to BBC, he also clicked some pictures to focus on commonplace objects of several refugee camps near the border. And, one of them is Bidi Bidi.

Here are some of his pictures of Bidi Bidi by Trenchard:

1. Below picture displays an educational poster hanging on the wall of Lona Kiji's home. She is a Bidi Bidi resident who fled here in September 2016 at the time of violence swept through Central Equatoria State. 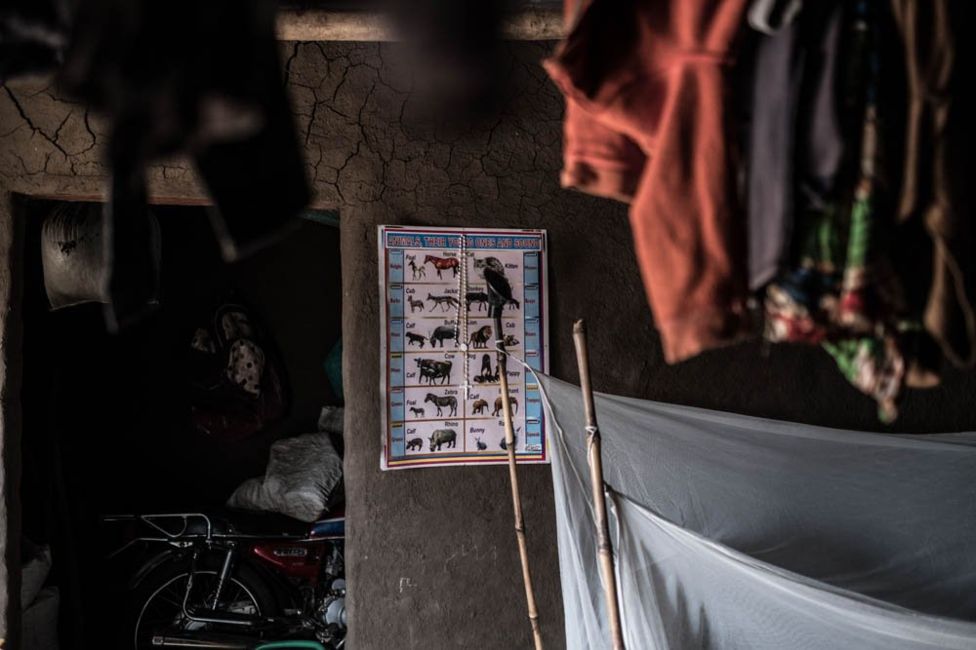 2. This picture is of a hut belonging to Malis Justin and his children. 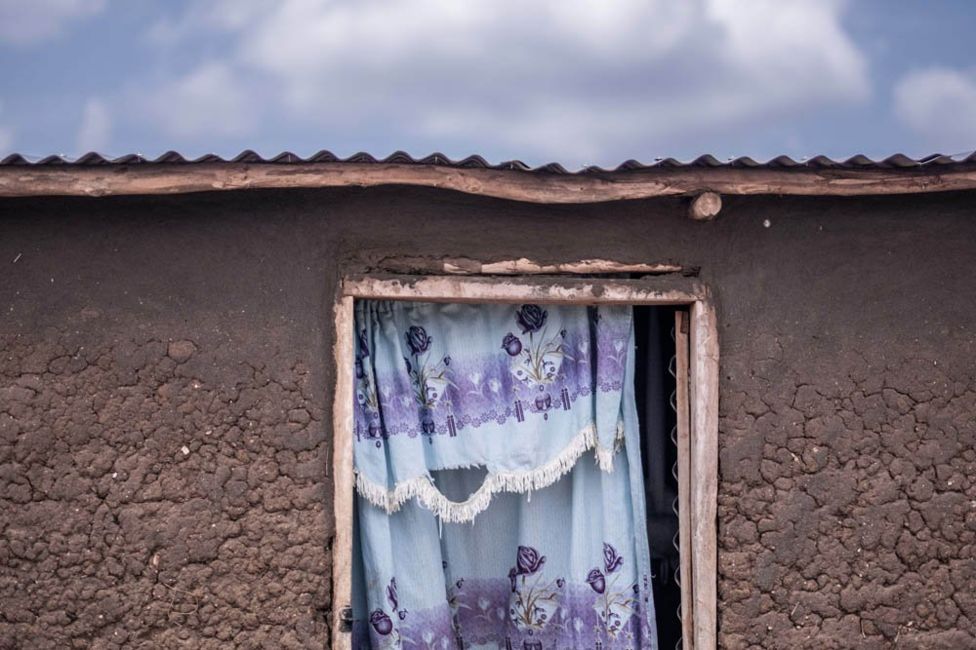 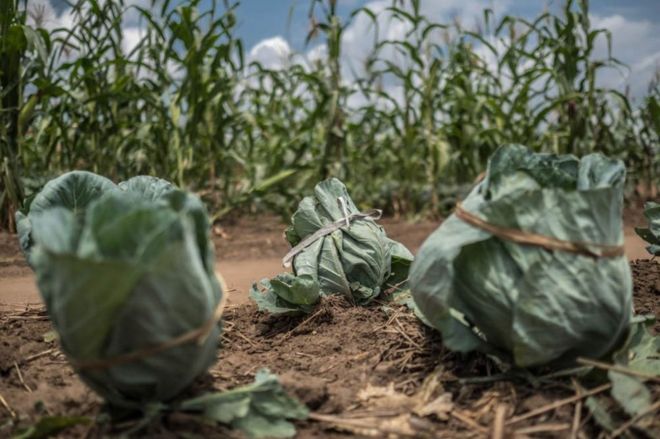 4. As many of the refugees are children, Richard draws a violent scene. 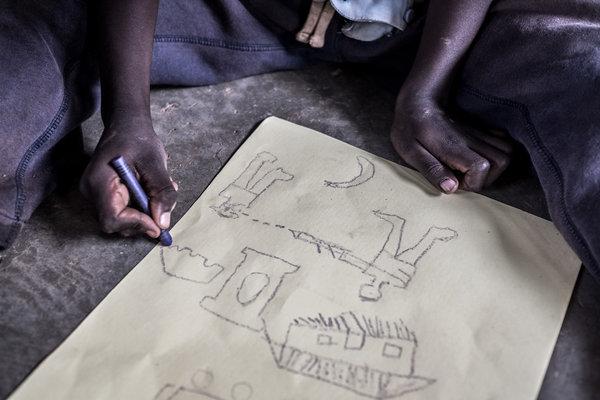 5. An aid agency donated solar panels to the camp people. A few of them lie outside a refugee's tent. Many of the refugees have brought or been given solar panels since electricity is scarce in the camps. 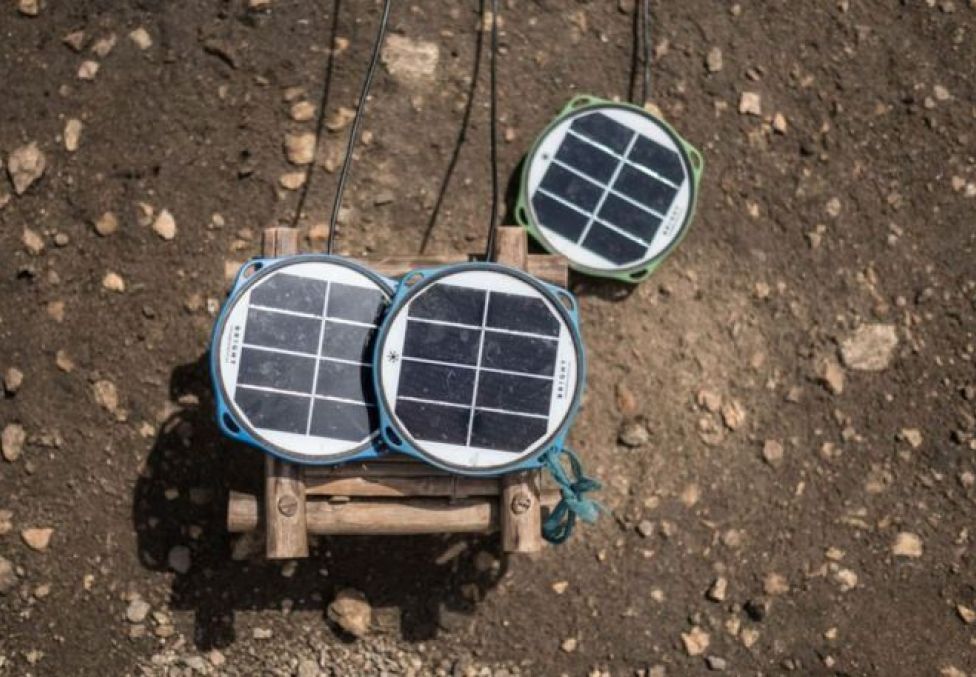 6. A crucifix and torches hanging on a nail 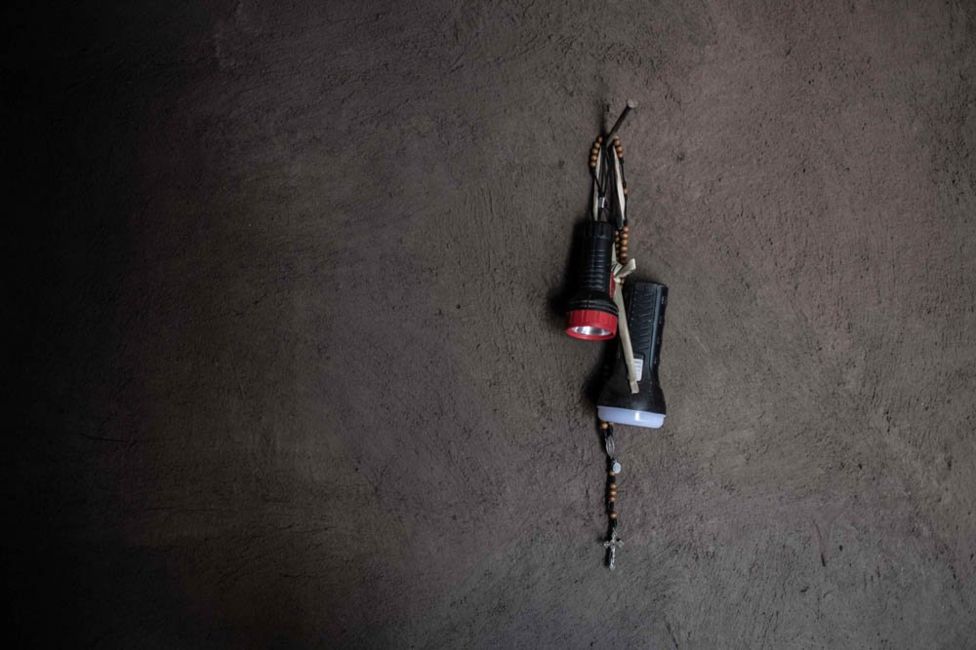 7. Some people harvest food for survival. One of them is 42 years old Martin Waru who harvested okra where he lives with his wife and nine children. To kick-start production on his small plot of land,  he was also given fast-growing seeds by Caritas. 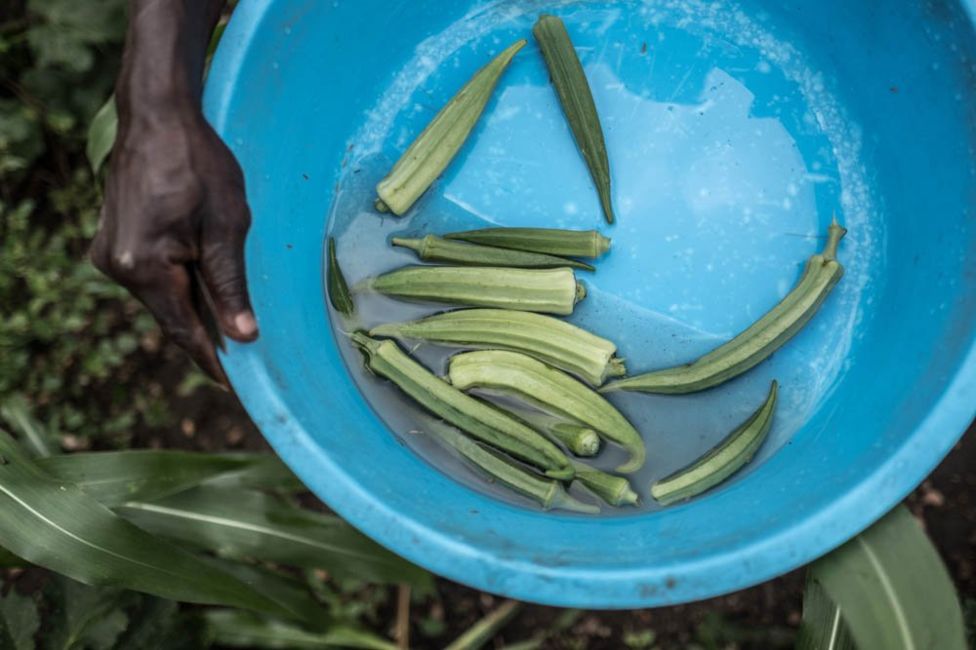 Well, no matter how much we talk about it, it will always be less. There is much more to learn about the lives of people living in such refugee camps. And, this is nothing much than an overview of it.

So, how much you enjoyed reading the article? Let us know in the comment section.

Sara Geurts: A Model Who Inspires Everyone to be Confident in Their Skin