5 Most Inspiring People Who Turned Disability into Opportunity

These people have been inspiring others for how they’ve kept self-faith and remained determined and dedicated despite a life full of challenges. 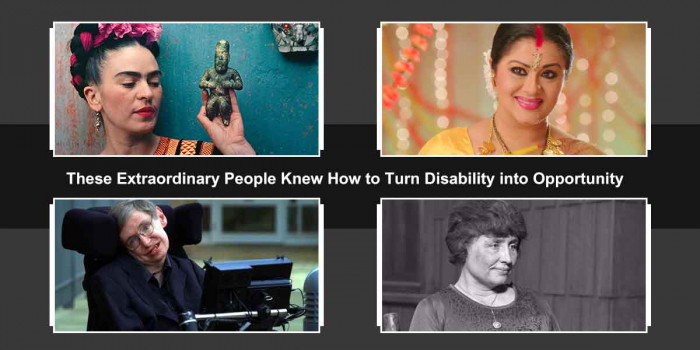 As they rightly say, “In adversity lies opportunity.” Some people learn to adapt to their hardships and difficulties and transform into an extraordinary being. With their self-faith and inner strength, they could achieve what they desire without being bogged down by the problems or personal struggles they face in life.

Here are some outstanding people who challenged all odds and disabilities of life, proving that nothing is impossible if one is determined and dedicated.

One of the famous surrealists, a Mexican artist named Frida Kahlo, broke stereotypes and was born with a rare condition named spina bifida that causes defects in the spinal cord. When she was 6-year-old, she contracted polio, and one left became thinner than the other.

Despite all these challenges, she was an active kid until the age of 18, when she got serious injuries in a car accident. When she began recovering from her accident, she discovered her love for painting. In the widely acclaimed painting “Self-Portrait With Thorn Necklace And Hummingbird,” she portrayed her chronic pain and suffering.

Sudha Chandran is an Indian film & TV actress and accomplished dancer who was born on 27 Sep 1965 in Mumbai. When she was 16, she met with a road accident in which her leg got gangrenous and was amputated. Subsequently, she regained mobility with a prosthetic Jaipur foot.

For a biopic entitled Mayuri based on her life and starred herself in a lead role, the film received National Film Award - Special Jury Award. She was also acknowledged with an honorary doctorate by Invertis University, Bareilly.

Stephen Hawking is an English theorist physicist, cosmologist, and author who served as the director of research at the University of Cambridge. His scientific works on quantum mechanics and the general theory of relativity were pivotal. He served as a Fellow of the Royal Society, a lifetime member of the Pontifical Academy of Sciences, and was bestowed with the Presidential Medal of Freedom.

When he was 21, he was diagnosed with a rare early-onset slow-progressing form of motor neuron disease (also called amyotrophic lateral sclerosis (ALS) or Lou Gehrig's disease) that left him paralyzed over decades. After he lost his speech, he communicated via a speech-generating device—initially using a handheld switch and eventually a single cheek muscle. Living with the disease for over 50 years and challenging the doctors’ claims of his life expectancy of two years, he breathed last on 14 March 2018 at the age of 76.

Born on 27 June 1880, Helen Keller was an American author, lecturer & political activist who contracted an unknown illness (possibly scarlet fever or meningitis) when she was 19 months. It left her blind and deaf. She communicated with the family cook’s 2-year-old daughter, who understood Helen’s signs. By the age of 7, she had over 60 home signs to communicate with her family and distinguished people by footsteps.

She wrote 12 published books and also many articles. ‘The Story of My Life’ is her autobiography and one of her notable works in which the story of Helen and her instructor & lifelong companion Anne Sullivan was highlighted. Its adaptation for film and stage was called The Miracle Worker. Her birthday is celebrated as Helen Keller Day in Pennsylvania.

She actively campaigned for women's suffrage, labor rights, socialism, antimilitarism, and other causes. In 1964, she was honored with the Presidential Medal of Freedom and was elected to the National Women's Hall of Fame at the New York World's Fair in 1965. She got inducted into the Alabama Women’s Hall of Fame.

Nick Vujicic, whose birth name is Nicholas James Vujicic, is an Australian American motivational speaker, published author, and Christian evangelist. He was born on 4 December 1982 in Melbourne, Australia, with an extremely rare condition named tetra-amelia syndrome that was characterized by the absence of arms and legs.

He founded an international non-profit organization and ministry named Life Without Limbs in 2007. In the short film titled Butterfly Circus, he starred as Will and also won the Best Actor award at the 2010 Method Fest Independent Film Festival.

Aren’t these stories truly inspiring? Well, they indeed are great as these people never succumbed to their disabilities but overcame them and emerged triumphant over life.

Maryam Mirzakhani: The First & Only Woman Who Won Fields Medal