After weeks of deafening silence, tech leaders finally begin to react to the policies of new administration. The executive order... 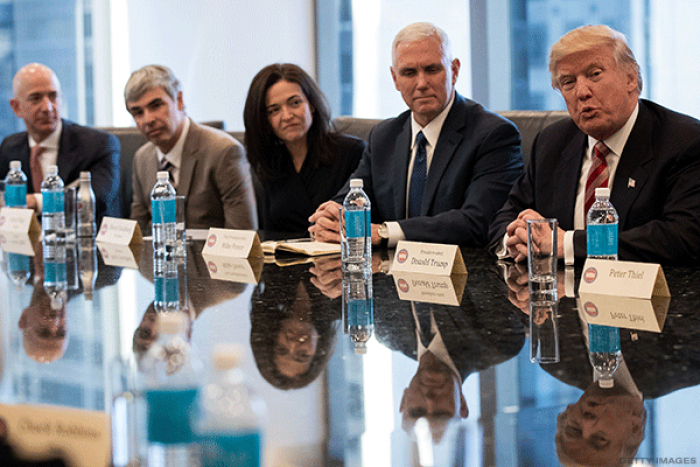 After weeks of deafening silence, tech leaders finally begin to react to the policies of new administration. The executive order enacted by President Donald Trump immediately barred some refugees and immigrants from entering US. There was confusion and outrage all around, including the scientific community.

Colloquially known as “Muslim Ban”, the order signed on January 27 suspended refugee admissions in the country for 120 days and indefinitely for the Syrian refugees. Citizens of countries with predominantly Muslim populations like Iran, Iraq, Libya, Sudan, Somalia and Yemen have been temporarily stopped from entering the United States.

Thousands of protesters gathered outside the airports to voice their disapproval against the detainment of these travelers at airports in the US.

Since the order has been passed, many members of the STEM (science, technology, engineering and math) community have expressed their concern over the ban. This decision would restrict many international research collaborations and attendances at major science conferences in US.

Elon Musk, CEO of Tesla and SpaceX has asked his Twitter followers for suggestions to the executive order that he will present to Trump.

The CEO of Microsoft Satya Nadella, who was born in India and moved to US for his computer science studies, also shared his opinion on LinkedIn regarding this.

"As an immigrant and as a CEO, I’ve both experienced and seen the positive impact that immigration has on our company, for the country, and for the world. We will continue to advocate on this important topic."

Netfix CEO Reed Hastings gave his personal statement on Facebook about what the people of Silicon Valley think about this.

"Trump's actions are hurting Netflix employees around the world, and are so un-American it pains us all. Worse, these actions will make America less safe (through hatred and loss of allies) rather than more safe. A very sad week, and more to come with the lives of over 600,000 Dreamers here in a America under imminent threat. It is time to link arms together to protect American values of freedom and opportunity."

Bloomberg reports that Sundar Pichai, CEO of Google gave a muted response. He kept his point focused on the employees. In a memo to the company’s staff, he said that more than 100 staff members of the company have been affected by this order. A copy of his memo was obtained by Bloomberg.

"It’s painful to see the personal cost of this executive order on our colleagues. We’ve always made our view on immigration issues known publicly and will continue to do so.”

Scientists have already taken a step against this immigration policy.

A petition denouncing this order has been signed by more than 12,000 researchers including Nobel Laureates.

In a statement by the president of the Union of Concerned Scientists, Ken Kimmell, he said that targeting Muslims is un-American and inhumane. Contributions by immigrants and refugees have always benefitted America’s economy and scientific enterprises. He further said that this would not only their American values but also bring worse outcomes for their country.

Uber CEO said that he would be bringing up this issue in his meeting with Trump this week.

“While every government has their own immigration controls, allowing people from all around the world to come here and make America their home has largely been the U.S.’s policy since its founding”

American Association for the Advancement of Science (AAAS) had its spokesperson CEO Rush Holt saying that scientists and students from all around the globe have influenced and made significant contributions to science.

"Scientific progress depends on openness, transparency, and the free flow of ideas. The United States has always attracted and benefited from international scientific talent because of these principles."

Students who have got their approval for studies in United States will also suffer because of this ban. Mary Sue Coleman, the president of the Association of American Universities also says that best students, scientists, engineers and scholars shall be given place in US for the national interest of the country.

Many other scientists have also spoken against this ban individually. Some have also announced that they would not be attending conferences since their colleagues are banned. Anna Watts, an astrophysics professor at the University of Amsterdam declined the invite to organize a meeting in the US.

Likewise, Megan MacKenzie also tweeted if travelling to US for a conference was ethical when your peers cannot attend it.

Is travelling to a conference in the US ethical, when your peers cannot (or are afraid to)? Asking for a friend. #MuslimBan

7 Inspiring Padma Awardees Who are Making India a Better Place