Srinivasa Gowda Hailed as the Usain Bolt of India, Ran 100 Metres in 9.55 Seconds

Srinivasa Gowda, a man from Karnataka, ran 100 meters in 9.5 seconds during the annual Kambala race. 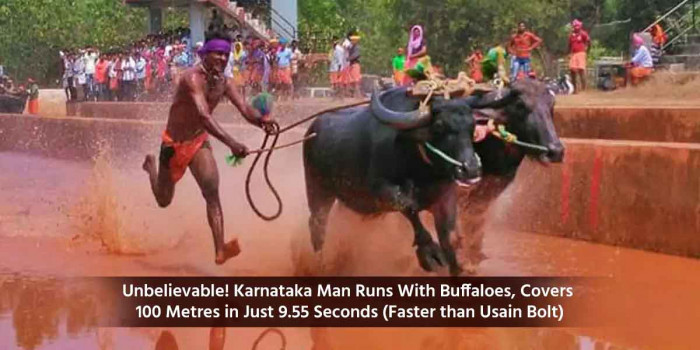 You must have read about Usain Bolt, a former sprinter who holds the world record in 100 meters, 200 meters, and 4*100 meters relay. With all these achievements, he is considered to be the greatest sprinter of all time. But it seems that India has found its Usain Bolt.

Srinivasa Gowda, 28-years old, a man from Karnataka, might have created history. It was on February 1, 2020, when this man from Mudbidri ran 142.5 meters in only 12.62 seconds in Kambala (a traditional buffalo race). It means he has covered 100 meters in a mere 9.55 seconds. Usain Bolt holds the record of completing 100 meters in 9.58 seconds.

The video of Srinivasa running with buffaloes went viral on the internet. The race is traditionally sponsored by households in the coastal districts of Udipi and Dakshina Kannada and Tuluva landlords. Kambara race is held in paddy fields every year, and participants run with a pair of buffalo.

#WATCH - Srinivasa Gowda from Karnataka ran 100m in 9.55 seconds at a "Kambala" (buffalo race). He was faster than Usain Bolt who took 9.58 seconds to create a world record. pic.twitter.com/rrbf3lxnpn

Twitteratis' Reactions on This Achievement

Just one look at his physique & you know this man is capable of extraordinary athletic feats. Now either @KirenRijiju provides him training as a 100m sprinter or we get Kambala to become an Olympic event. Either way, we want a gold medal for Srinivasa! ???? https://t.co/H3SBiOVSKr

P Muralidhar Rao, BJP Secretary, also tweeted, saying that he should be trained so that he could make a name for India internationally.

India will rise and shine the Indic way!
100 meters in just 9.55 sec is an amazing feat. Proper training to Srinivas Gowda will definitely help him to make name for the country. My best wishes.@KirenRijiju @CTRavi_BJP https://t.co/ImgR3W1v4W pic.twitter.com/2zaUTBpLYo

Shashi Tharoor urged the Athletics Association Of India to train him for the Olympics.

Faster Than Usain Bolt? Karnataka Man Running With Buffaloes Covers 100 Metres in Just 9.55 Seconds. I urge the Athletics Association of India to take this man under their wing & make an Olympic champion of him. Wonder how many hidden talents we have! https://t.co/G7jPE2zIng

Union Minister of State for Youth Affairs and Sports took to his Twitter handle and said that Sports Authority of India reached Srinivasa, and his train tickets are booked for SAI center.

I'll call Karnataka's Srinivasa Gowda for trials by top SAI Coaches. There's lack of knowledge in masses about the standards of Olympics especially in athletics where ultimate human strength & endurance are surpassed. I'll ensure that no talents in India is left out untested. https://t.co/ohCLQ1YNK0

Yes @PMuralidharRao ji. Officials from SAI have contacted him. His rail ticket is done and he will reach SAI centre on monday. I will ensure top national coaches to conduct his trials properly. We are team @narendramodi ji and will do everything to identity sporting talents! https://t.co/RF7KMfIHAD

Along with these famous people, several people have shared his video on different social platforms. This ordinary man has become a star overnight by performing outstandingly in the race. Here are other ordinary people who became a star overnight and are earning in millions.

Srinivasa Gowda reacted to this achievement and said,

“People are comparing me to Usain Bolt. He is a world champion. I am only running in a slushy paddy field. I love Kambala. The credit of my success should also go to my two buffalos. They ran very well. I chased them or drove them."

Several villages organize Kambala in which youth participate with their trained buffaloes. A few years back, this traditional race was banned as it involved jockeys whipping buffaloes. Later, special legislation was passed.

Some other social media user wrote-

"True, but physics says something was making him run faster. Anyhow, appreciating his strength."

"What a physique... it seems someone carved him from stone... marvelous..."

"That's super... If timing is accurate, then it's great discovery #Karnataka."

Some other user wrote-

"OMG. Is it real? The Indian government needs to look into this man's speed. Can you reach out to the Sports Authority of India or the Sports Ministry?"

"This guy will surely get us a gold medal at the Olympics!"

The records can’t be compared as he was running with buffaloes, and the speed was also generated by the animals. But villagers claimed that his timing was faster than Usain Bolt. Also, it is sure that someone is here to compete with Usain Bolt.

Earlier, Rameshwar Gurjar of Madhya Pradesh came into limelight when he ran barefoot 100 meters in 11 seconds. He was also considered Usain Bolt of India, but he didn’t repeat the same performance at SAI, so his fame vanished. And India has another 8-year-old young talent Pooja Bishnoi, who is a U-10 world record holding athlete and the only Asian girl with 6-pack abs.

Do you know anyone or have read the story of the local champions that should be trained for the Olympics? If so, then drop your comments below.