Shocking it is! 19 Year Old Boy from India Allegedly Shoots his Teacher 4 Times at College 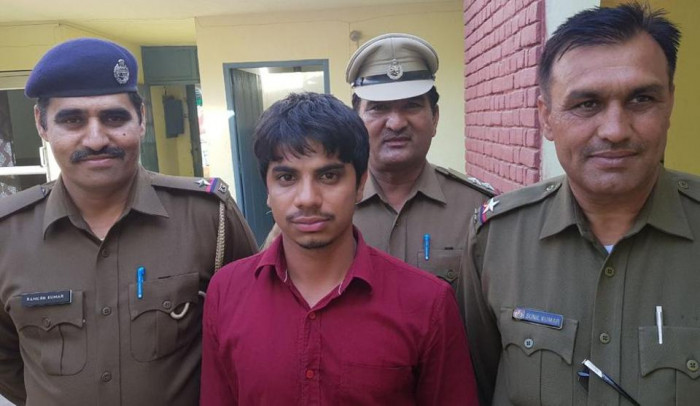 Police in Haryana (India) has launched a murder investigation after a 19-year-old Indian boy (Jagmal) a B.A. second year student allegedly shoots his English Professor (Rajesh Malik) at Sonipat’s government college. According to authorities on Tuesday morning, the teenager barged into the staff room and shoot his teacher in front of his daughter.

The Haryana police arrested the 19 year old accused (Jagmal) and revealed that the student was offended at his teacher for scolding him in the class. They said there is girl student who is Jagmals’ classmate, was the center of this whole incident.

Preliminary investigations conducted by police uncovered that around two months ago, the English lecturer has rebuked angrily Jagmal and his classmate (girl) for disturbing the class by talking to each other. After that, they were involved in a violent argument and the professor asked them to leave the class and warned them to expel them.

Even the professor complained to both Jagmal and the girl’s parents about the same incident happened in the class and how they were disturbing the whole class said inspector Indivar Singh whose team caught Jagmal within 36 hours.

Police said the girl was not talking to him after that incident and this made him more angry and he decided to take revenge and started planning with his few friends. Police also arrested two of his friends for planning a criminal affair.

To accomplish this dreadful event Jagmal, the accused student, stole his father’s licensed pistol on Monday morning and came at his college and fired four bullets on his professor Rajesh Malik.

Rajesh’s 17-year-old daughter was present at the location where this whole incident took place, she then raised alarm and after that other staff member immediately rushed and took him to a local hospital, where he was declared dead. Although, the exact details will uncover after the post-mortem of the body. After shooting, the accused start threatening other students and staffers - said sources.

According to Sonipat district police, after hearing the whole story about his son’s death, his father collapsed down.