Did Mrs. Vassilyeva (the World’s Most Prolific Woman) Really Give Birth to 69 Children?

Mrs. Vassileyva is a Russian woman who was from the 18th century. She holds the Guinness World Record for being the world’s most prolific mother ever, having given birth to 69 children. 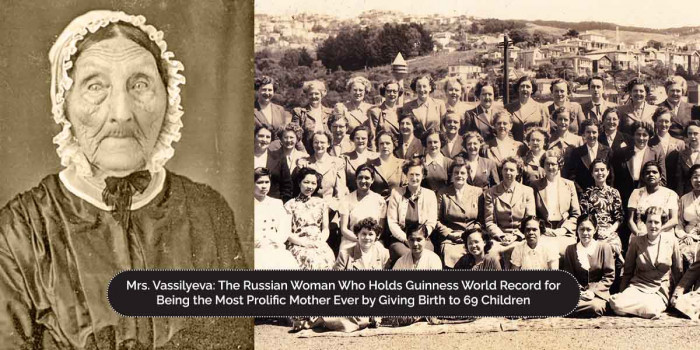 Nowadays, giving birth to just one child and raising them can be challenging and demanding enough. But according to the historical reports, a woman bore a whopping number of children (69) throughout her lifetime. She has been called the most prolific mother ever by the Guinness Book of World Records.

Believing this story is hard, but it is true (as various sources suggest). Mrs. Vaasilyev (the first name is not known, but some sources suggest that it is Valentina Vassilyev), the wife of Feodor Vassilyev (b. 1707–c. 1782), had given birth to 69 children during her 76-year-long lifespan. They hailed from a peasant family in Shuya, Ivanovo Oblast, Tsardom of Russia.

The births were extraordinary and miraculous as in 27 labors during 40 fertile years of her life: she gave birth to 16 pairs of twins, seven sets of triplets, and four quadruplets (16x2+7x3+4x4=69).

On 27 Feb 1782, this case was reported to Moscow and recorded by the Monastery of Nikolsk. Out of the 69, only two children (one set of twins) did not survive in their infancy. Also, from his second wife, Feodor had 18 children from 8 births, of which six were twins, and two were triplets.

It is very shocking, as many of you will think- is this even humanly possible? But it is believed to be true! So let’s learn how it could be feasible.

"In an original letter now before me, dated St Petersburg, Aug 13, 1782, O. S. Feodor Wassilief [sic], aged 75, a peasant, said to be now alive and in perfect health, in the Government of Moscow, has had 27 births 69 children by his first wife and 8 births 18 children by his second wife.”

“In all, 35 births, 87 children, of which 84 are living and only three buried. . . The above relation, however astonishing, may be depended upon, as it came directly from an English merchant at St Petersburg to his relatives in England, who added that the peasant was to be introduced to the Empress."

The same numbers were also mentioned in Ivan Nikitich Boltin's 1788 commentary on Russian history. Moreover, the author of Saint Petersburg Panorama, Bashutski (1834), said about this record-

"In the day of 27 February 1782, the list from Nikolskiy monastery came to Moscow containing the information that a peasant of the Shuya district, Feodor Vassilyev, married twice, had 87 children. His first wife in 27 confinements gave birth to 16 pairs of twins, seven sets of triplets and four sets of quadruplets. His second wife in eight confinements gave birth to six pairs of twins and two sets of triplets. F. Vassilyev was 75 at that time with 82 of his children alive."

Furthermore, the Lancet (1878) referred to a twin study conducted by the French Academy-

"Apropos of the enquiry, the Committee of the Academy recall an account of a quite extraordinary fecundity that was published by M. Hermann in his "Travaux Statistiques de la Russie," for Fedor Vassilet [sic]. . . who, in 1782, was aged 75 years, had had, by two wives, 87 children."

So the author said that “extraordinary fecundity” may be from “the man singly, the woman, or both jointly” but could be more likely due to Feodor as the story repeated with his second wife.

Various existing sources indicate that this seemingly questionable and statistically unlikely story is true & she is the woman with most children. Julia Bell, in a 1933 article in Biometrika, said that a 1790 book of B. F. J. Hermann Statistische Schilderung von Rußland offered the claims about Feodor Vassilyev's children but "with a caution."

She mentioned the Lancet article and contacted "M. Khanikoff of the Imperial Academy of St Petersburg for advice as to the means they should pursue, but were told by him that all investigation was superfluous, that members of the family still lived in Moscow and that they had been the object of favors from the Government." Bell concluded that Vassilyeva's case "must be regarded as under suspicion."

"Sadly, this evasion of proper investigation seems, in retrospect, to have dealt a terminal blow to our chances of ever establishing the true detail of this extraordinary case."

However, she may have had a genetic predisposition to hyper-ovulate (release multiple eggs in one cycle), which leads to higher chances of having twins or multiple children. Also, a woman can have 27 pregnancies during her fertile years.

Mrs. Vassileyva is not the only time a woman gave birth to so many children. Back in 2017, a 40-year-old Palestinian woman was known to give birth to 69 kids, as her husband told the Gaza Al-An news agency. She also gave birth to twins 16 times, three twins seven times, and another four twins four times.