A kid named Ollie Trezise from Maesteg, Wales, was born with a rare health condition causing the brain to grow inside the nose. This has made him look like the popular Disney character, Pinocchio. 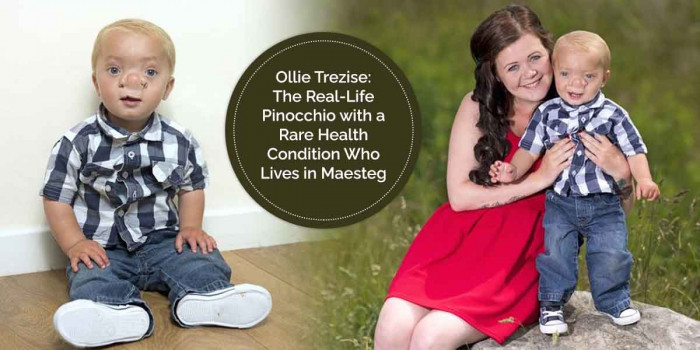 We all have read or heard the fun & interesting story of the popular cartoon character ‘Pinocchio’ in our childhood, which was written by Carlo Collodi. In the UK’s Maesteg town in Wales, there is a child named Ollie Trezise, who is called the real-life Pinocchio by his proud mum, Amy Poole (22).

He was born with a rare condition called encephalocele that caused his brain to grow through a crack in his skull into a nose, making it stick out like Pinocchio’s. Read his story here.

At her 20-week scan, Amy had first discovered something unusual about Ollie when doctors told her that he had an unexpected soft-tissue growing on his face. However, she was still shocked when she gave birth to him at Cardiff University Hospital in February 2014. She was amazed because he was very small, although his nose was as massive as the size of a ball.

Amy, who has since split from Ollie's dad, said-

"When they gave me Ollie to hold, I was so surprised that I almost couldn't speak. He was so tiny, but there was this enormous golf-ball sized lump on his nose. At first I wasn't sure how I would cope. But I knew that I would love him no matter what he looked like."

Later, an MRI scan was conducted that confirmed the lump was encephalocele, a rare defect causing the brain to grow through an opening in the skull and creating a protruding sac like a golf ball on his tiny face. In the case of Ollie, the fluid-filled sac grew on the nose and caused it to stick out.

In the next nine months, his body and nose both grew. When he was just 21 months old, Ollie had gone through several agonizing operations to help ease his breathing.

The doctors told Ollie’s petrified mother that they needed to operate on him to prevent meningitis, open up his nasal passage and allow him to breathe. About this, Amy said-

"I was so scared to let Ollie undergo such major surgery. He was so fragile, and I couldn't bear the thought of losing him. But doctors explained that he was at risk of contracting an infection or even meningitis if he tripped and knocked his nose - so I agreed to the surgery."

His 2-hour surgery at conducted Birmingham Children's Hospital was high-risk but successful, getting him rid of the bulbous sac. With a big zig-zag opening in his head, doctors could close the hole in his forehead and remove the excess sac of brain fluid to try to rebuild his nose. However, his nose remains disfigured.

In the future, he would need more operations. But before doing any invasive surgery, doctors would wait to see how his skull develops. Amy said-

"We have regular check-ups at the hospital, and things are going really well. Ollie will probably never look like all the other children and I'm terrified that he will be bullied at school. But he is such a lovely boy that it's impossible not to adore him.”

"I think he is absolutely perfect the way he is. There is nothing wrong with being different. Ollie is a unique, clever, funny little boy and he amazes me every day. He is my special little Pinocchio, and I will never stop loving him."

"Cases like Ollie's are incredibly rare. I see perhaps one per year. We are very pleased that the operation was a success, and wish him all the best for the future." 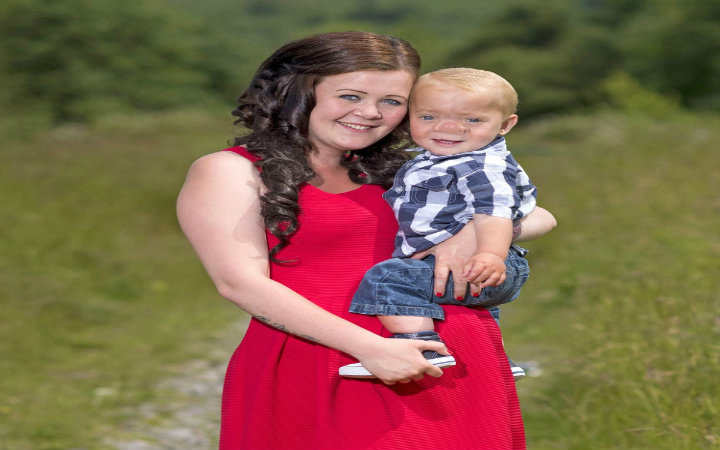 The mother faced various nasty comments and taunts from strangers that included her baby should never have been born and some random strangers calling him ugly. Mum-of-two Amy said:

"It's absolutely heart-breaking. Once, a woman told me I should never have given birth to him. I nearly burst into tears.”

“I’m just glad he wasn’t old enough to understand her cruel words. All children are gorgeous and I wouldn’t dream of insulting another person’s child.”

But Ollie is a perfect child for his parents, and they feel for him. Amy says-

"To me, Ollie is perfect. He is my little real-life Pinocchio and I couldn't be prouder of him."

Initially, she felt a bit troubled about how she would handle him like this in the future, but she knew that she loved him unconditionally & no matter how the baby looked, she would take care of him. And despite it all, he still smiles and laughs. His mother said-

"After the operation, Ollie had a huge zig-zag scar across his head. He must have been in so much pain, but he just kept smiling and laughing. His positivity made it so much easier for me."

Moreover, she has planned on teaching him how to tackle bullying and have the happiness he deserves. Amy said-

“I think he is absolutely perfect the way he is. There is nothing wrong with being different… I will make sure he knows how amazing he is and, when he is old enough to understand the cruel words, he will be strong enough to rise above them.”

After recovering fully, Ollie is a bubbly little boy who loves to splash in his paddling pool and play with his 4-year-old sister named Annabelle. Amy said-

"He is such a character and always has me in fits of laughter. Plus he and Annabelle are best friends - they're always getting up to mischief. Annabelle is even jealous of Ollie's nose as it gets him lots of attention. Sometimes I catch her grabbing it when she thinks I'm not looking."

Ollie’s mom is working on spreading awareness around this condition to prevent other children from being bullied. She said-

"I don't want other kids to face the nasty comments that Ollie has, and I think the best way to combat this is by educating people. I'd much prefer if people asked me why Ollie looks the way he does, rather than just telling me is ugly or pointing and staring."

Don’t you think children like Ollie need more care and empathy than other kids? Also, kids in schools must be taught why bullying is a bad habit and how it can have a lifelong impact on those who get bullied.

OMG! How Can They Do This??? - 9 Unrealistic Things