In today’s world, people often consider having a nuclear family. Overpopulation, financial issues, and a few other reasons are behind any couple’s decision for not raising a family or having no more than one or two children. But polygamy still exists in some sects and parts of the world, which leads to multiple marriages and large families.

You would be surprised to know that Ziona (often misnamed as Ziona Chana in the non-native media) is the 75-year-old Indian man from Baktawng village in the central Serchhip district of Mizoram who heads the “world’s largest existing family.” He is blessed with 39 loving wives, 94 children, 14 daughters-in-law, and 33 grandchildren who live together under a single roof.

Interestingly, he is known for holding a world record for fathering the largest living family of 180 people and counting. He featured in Ripley's Believe It or Not top 11 strangest stories for the year 2011 and 2013's Ripley Believe It or Not book 9.

Let us know more about Ziona and his unusually large family. 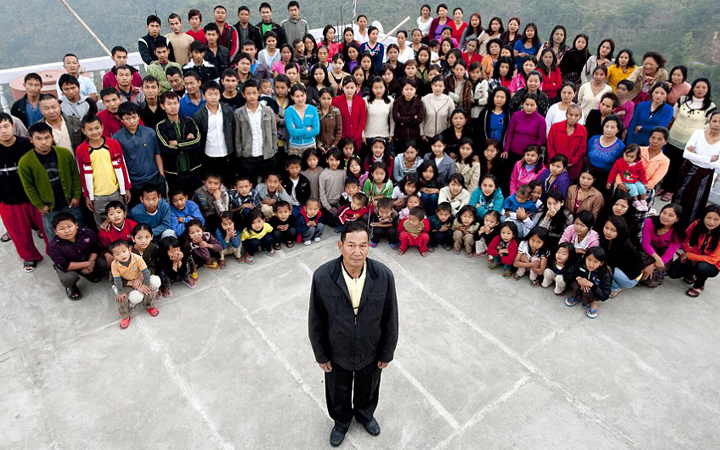 A Christian sect, Chana pawl (originally named Khuangtuaha Pawl), is established by Ziona’s father Khuangtuaha on 12 June 1942 and allows the male members to practice polygamy. He had seven wives and 29 children (15 daughters and 14 sons).

Khuangtuaha founded the sect when the disciples got removed from Hmawngkawn village by the headman village for propagating a theology regarded as “wrong and dangerous.”

The followers of the Chana sect claim that its origin traces back to the Revelation Chapter 20 of “Kum Sang Rorel” of the Holy Bible or 1000 years' rule by Jesus Christ on the planet Earth. Every year, the sect’s founding day is celebrated as "Bawkte Kut" or the festival of the hut on 12 June.

Currently, Ziona is the leader of this sect. It would soon rule the world with Christ and has members of over 400 families and 2000 members living in the Baktawng Tlangnuam village. 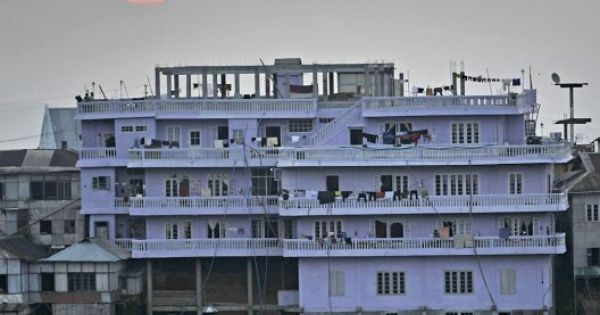 At the age of 15 or 17, Ziona (born on July 21, 1944) first married Zathiangi, who is three years older than him. She maintains a strict discipline in the family and takes care of the household activities. In a single year, he had ten wives. At the age of 60, he married his last wife, who was 25 years old back then. He once even said that he is even willing to go abroad in search of a wife to expand his sect.

Eventually, to accommodate his huge family, Ziona got a four-story mansion constructed, which looks like a boarding house and has 100 rooms. His 4-story family residence serves as a major tourist attraction of the state. Located in the mountainous village of Baktawng, it is known as the "Chhuan Thar Run" or the House of the New Generation. A Khalbauk or a guesthouse accommodates the village visitors.

The ground floor of the mansion has a double bedroom in which Ziona’s wives take turns to sleep with him as per the roster. His younger wives stay close to him on the same floor, and 7-8 of his wives always cater to his needs throughout the day. His older wives live in the dorms on the first floor and younger ones on the ground floor. All his wives are on cordial terms and have no rivalry. Out of his 39 wives, 22 of them are under the age of 40 and get a week to spend with him. He has 26 sons-in-law, and his daughters live separately from the families.

Ziona says that he named all his children and grandchildren and remembers the names of every family member. His family self-reliant and grows crops for their crop needs. In one day, the family consumes 100 kg of rice, 40 kg chickens, and 60-70 kg potatoes. His wives cook the food, and his daughters take care of the laundry washing and house cleaning. The men of the family manage the small cottage industries of wood furniture (carpentry), livestock rearing, agriculture (jhum cultivation), and aluminum utensil making.

He also built a school for his children, which is managed by his younger brother. Though teaching in the school is as per the government’s curriculum, it has some Chana sect specific subjects. He doesn’t seek any government aid.

Ziona says that he is the special child of God. He believes he is a holy man loved and looked after by several people. He added that he considers himself lucky to be a husband of 39 women and head of the world’s biggest family.

"It's a safe bet that Ziona Chana would not be impressed watching 19 Kids and Counting or Sister Wives. The 74-year-old Indian man has 39 wives, 94 children and 33 grandchildren."

A Coffin That Saved Lives In The Past: The Safety Coffin