10 Greatest Escapes From The Toughest Games In History 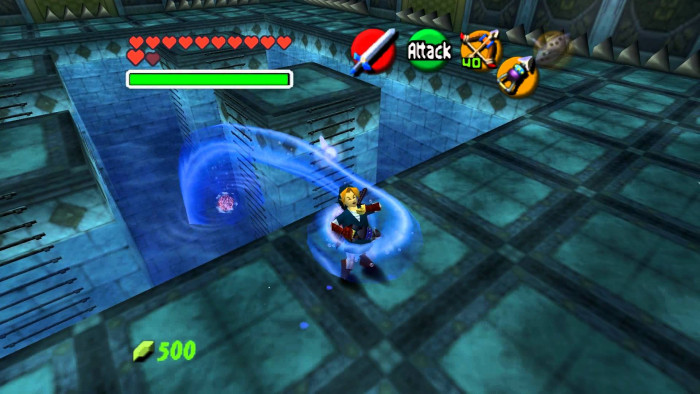 Take the challenges away from a video game and it becomes just an interactive video. The challenge makes video games fun and it’s what makes it so rewarding when the final boss finally falls to his knees or when the end credits start scrolling across the screen.

But, there are some games which cross the difficulty threshold into the torture territory. Whether they take deliberate pleasure from punishing players or they accidentally set the bar a little too high, here are the 10 greatest escapes from the toughest games in history.

Gamers of late still hasn't forgiven "The Water Temple." For Zelda fans, "The Water Temple," is the kind of thing that nightmares are made of: the gaming equivalent of an abusive bully. And though most of us probably cried ourselves to sleep wondering why Nintendo had to make a game we were enjoying so much into a pilgrimage of watery horrors, "The Water Temple" has scarred us deeply. Essentially a never-ending maze built out of keys, levers, doors, changing water levels and annoying monsters, this one is bad enough to stop you from ever picking up Ocarina of Time again.

Tubular" is like a personal invitation from Nintendo to challenge their authority. It exists purely to increase the likelihood that you'll smash up your SNES controller and have to replace it with a brand new one. Super Mario World is arguably Nintendo's finest achievement to date and probably the best Mario game ever made, but "Tubular" is one of the most annoying levels the great company ever put out into the world.

Not only is timing absolutely everything here, but the sheer amount of dodging that the level requires, borders on the abusive. Many have tried for years and failed. One look and you'll know exactly why this level is considered a creation of satan.

Yes, final levels are supposed to be difficult, and they're supposed to challenge all the skills you've learned throughout the course of the game. But "The Great Maze," the final level in Super Smash Bros.

Brawl's Subspace Emissary, is both difficult and confusing, which basically translates to nope. Not only are you forced to fight sub-space clones of various enemies, you've got to re-face all the bosses you've already defeated, which is something no gamer ever wants to hear. Depending on how well you confront this level, it can take between 2 hours and 2 weeks to complete.

4. The Great Palace - Zelda II: The Adventure Of Link (NES)

"The Great Palace" is basically an escalating series of events rendered to make you as angry as possible. And if you're a bird lover, prepare to change your mind: this level will have you setting fire to your local aviary at 2 o'clock in the morning.

The fact Link has to face so many enemies inside "The Great Palace" is unfortunate enough, but the way they spit fire at you - at a seriously frustrating angle that makes dodging so damn hard - just puts it all into perspective. The level doesn't end without you firstly facing off against a creature called The Thunderbird, and then - as if that wasn't enough - you're up against Dark Link.

With a lot of the horribly painful levels included on this list, a bunch of them - mainly the Mario ones - can be conquered if you're prepared to seriously hone your skills. At least they play fair. But some games don't care about things like that, one of which happens to be Sega's Sonic Unleashed. "Eggmanland" is the worst nightmare you could imagine.

It's kind of impossible to predict the storm that erupts within the confines of "Eggmanland" because the game never prepares you for it. At all. It throws you from one insanely difficult set-piece to another, not really bothering to let you, you know, breathe. The worst part is that it never ends. For your average gamer, you're looking at between 30 minutes and an hour to complete this thing.

At first, this level kind of looks like a joke (and it is a bonus level, to be fair), one that asks you to navigate a series of platforms whilst Mario is... where is Mario? He's up in the sky, of course, and it's up to you to judge where and when exactly he's going to make an appearance, whilst trying to utilise wind which has no discernible pattern.

"The Dam," is an underwater level courtesy of Teenage Mutant Ninja Turtles for the NES. This level - presumably programmed by somebody going through a messy divorce - required you to swim through a tunnel, dodging electrified tentacle things, and defusing bombs. Oh, and you're also on a timer, just 'cause.

Scientists currently believe that "The Dam" was responsible for at least 9 out of 10 mental breakdowns that occurred in 1989.

Goldeneye marks one of the earliest times that a first-person shooter really made sense. Not because we had the movie to work out the plot points for us or anything, but because it showed gamers just how good this genre of video game could be.

The basic enemies hurt Bond far too much for you to beat this thing on even the easiest difficulty. Then you have to face Jaws, which isn't exactly a walk in the park, which sets off a series of alarms and makes things generally overwhelming. The worst part? If you die, you have to go all the way back to the beginning again. Does anybody want to be Bond this much? I'd rather jump off a dam.

If you know that you're not a very patient person, you'd do well to never attempt "The Perfect Run" in Nintendo's otherwise excellent and wonderful Super Mario Galaxy 2 - for the sake of your brain function, at least. Having collected every other star over the course of the game (there's 242 in all), it's up to Mario to navigate an impossibly ridiculous series of challenges in this final stage, one which tests all the skills you've learned as you're hurled between platforms and made to dodge things over and over again.

The killer is that you can't get hit - not even once - and the slightest mis-judged movement means game over.

Battletoads is one game renowned for the fact it probably resulted in more NES consoles being hurled through windows late at night than any other. And its reputation is justified: the game is a living hell.

This is one of those levels that tried to vary the gameplay a little , so you're put on a bike-thing and made to dodge over a hundred intricately placed pylons, all of which approach at the speed of a rocket jet.