The lightsaber, sometimes referred to as a laser sword, was a weapon used by the Jedi, the Sith, and other Force-sensitives. Lig... 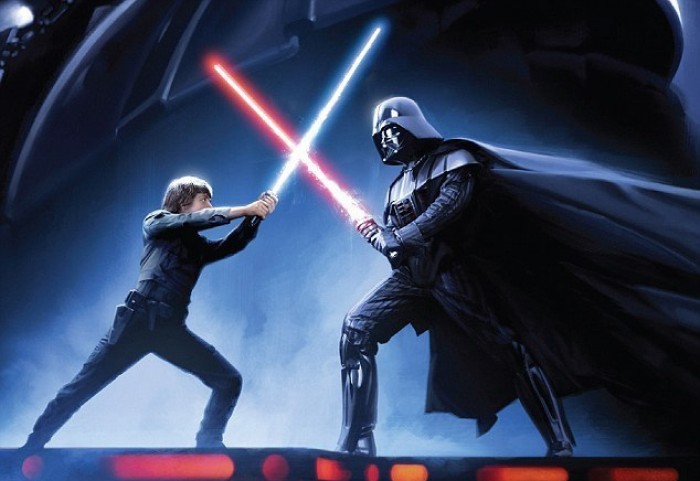 The lightsaber, sometimes referred to as a laser sword, was a weapon used by the Jedi, the Sith, and other Force-sensitives. Lightsabers consisted of a plasma blade, powered by a kyber crystal, that was emitted from a usually metal hilt. It was a weapon that required skill and training, and was greatly enhanced when used in conjunction with the Force. (6.1)

"It's heavier than I thought."

"Energy constantly flows through the crystal. You're not fighting with a simple blade as much as you are directing a current of power."

Apart from the popular standard green and red light sabers there are a variety of other lightsabers that include harmless powered down Practice Sabers to highly destructive Double-Bladed Sabers.

The standard lightsaber consisted of a straight hilt approximately 20 to 30 centimeters long. As it is the standard make, it has no defining features other than details on individual hilts, as each weapon is often self-fabricated by the wielder and customized to suit their specifications.

An ancient design dating back to the Great Scourge of Malachor, a crossguard lightsaber consisted of a standard blade with two shorter blades perpendicular to it at the end of the hilt.

Kylo Ren in the seventh installment of the Star Wars Saga “The Force Awakens” can be seen wielding the Crossguard Lightsaber, which was made by Kylo Ren himself.

Also referred to as saberstaffs, double-bladed lightsabers consisted of a single hilt that projected a blade from both ends, resulting in a deadly staff-like weapon. Most saberstaff hilts were of increased length, as they usually consisted of two separate lightsabers connected at the pommels.

Similar to the saberstaff, these weapons could emit a blades from each end of the hilt. Unlike a saberstaff, however, the hilt was as long as a single-bladed lightsaber, with a circular rim that, when activated, could spin the blades along a track.

Curved-hilt lightsabers were of a design which featured a hilt with a built in curve. This was usually done to allow the hilt to fit better into the palm, facilitating the use of one-handed fighting styles such as Form II, or to provide variable blade angle to confuse opponents.

This weapon was essentially a single bladed lightsaber with an attachment that allows it to fire blaster bolts. Only one example is known to have existed.

Darth Bane, Jedi Temple Guards, and  Knights are the known wielders of the Lightsaber Pike.

The elderly Jedi Tera Sinube wielded one such weapon during the Clone Wars, and so did Maul during the reign of the Galactic Empire.

Training lightsabers were most often used by Jedi younglings before they underwent the Gathering and built a weapon of their own.

Essentially, a shoto was a short lightsaber. Featuring a shortened blade length and diminutive handle. Shotos were usually used as the secondary weapon in dual-blade combat. Shotos were also used as primary weapons by some duelists, most who did so being of diminuative size, making a full sized lightsaber impractical, though this is not always the case. Master Yoda is an example of this.

Shotos were wielded by diminutive combatants like Yoda, whose stature made it impractical to wield a full-scale lightsaber, and also as off-hand weapons for those duelists who employed twin-bladed techniques, like Ahsoka Tano.

This ancient lightsaber had a unique black blade that was flattened and came to a point like a traditional sword, rather than the rounded beam of more standard lightsabers.

The Mandalorian and the leader of Death Watch during the Clone Wars, “Pre Vizsla” wielded Darksaber. Darth Maul killed Vizsla and took the Darksaber as his own.

5 Popular Italian Songs Of All The Time