11 Insane Simpsons Prediction That Prove That Their Writers Are Psychic

If you search for ‘Simpsons did it first’ you will find a lot of websites comparing real life events to the old episodes of Simpsons. 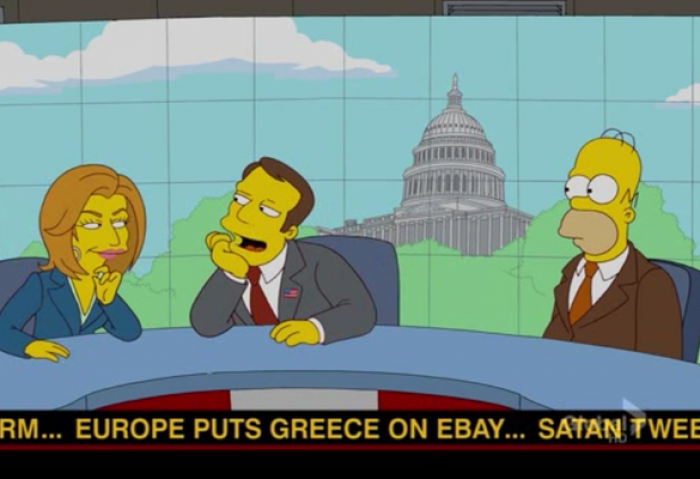 Over 28 seasons and 600 episodes, there is not a single element of life that the Simpsons haven’t touched. The satirical nature of the show gives it the liberty to take honest and clear takes on the society and how it’s going end up in a few years down the line.

Surprisingly enough, some of their jokes on society has become into a harsh reality. These are the 10 Simpsons predictions that are so insane that it doesn’t seem like a coincidence anymore.

The financial crisis in Greece rumbled on in 2015, hogging headlines for weeks, but the long-running US show saw things going awry there years before: just witness this small, subtle gag in 2013 episode ‘Politically Inept, With Homer Simpson’. As Springfield’s most loveable buffoon is being interviewed on TV, a news ticker flashes on the screen below with the headline: “Europe puts Greece on eBay.”

Out of all the prophecies that came true out of a Simpsons episode, stolen lemon tree was one of the most hilarious one.

In the episode Lisa’s wedding you can clearly see what seems to be a rendition of a smartwatch making calls when Lisa’s future fiance asks someone to fix the electronic billboard on which he proposes.

In the Season 5, Episode 19, "Sweet Seymour Skinner’s Baadasssss Song" there is a scene where a sleeping dog smells food, the smells leads to the kitchen where the cook is mixing assorted horse parts in the dish.

While this Simpsons episode aired in 1995, the similar horse meat scandal happened in the year 2013.

In the episode ‘Bart to the future’ which aired during the failed presidential run of Trump in year 2000. Lisa becomes the president and mentions President Trump leaving the office with a debt.

The Simpsons called out on Virtual Reality back in 1998 when the family goes to a carnival where they witness a Yard Work Simulator. The scene shows two kids wearing head gear and doing yard work in thin air.

Another weird invention that Simpsons paved the way for was ‘A baby translator’ which could help the Simpsons what the baby Maggie was trying to say.

Many tried pulling the scheme but it didn’t work quite as expected.

In this episode where Stephen Hawking the great makes a cameo. He admits that Homer’s Donut Theory is intriguing and he might steal it.

Here you can find out more how Homer’s fictional theory of Donut shaped universe compares to 3-torus.

Long before the era of smartphones even the first touchscreen phones, the simpsons predicted that the phone will have a video calling capability in Season 6, Episode 19, "Lisa's Wedding".

Creepiest of the all prediction was of the 9/11 attacks. In the episode ‘The City of New York vs Homer Simpson’, a moment alludes to the 9/11 attacks on the World Trade Centre in New York City.

10 Dazzling Personalities Who Successfully Made Their Way To EGOT