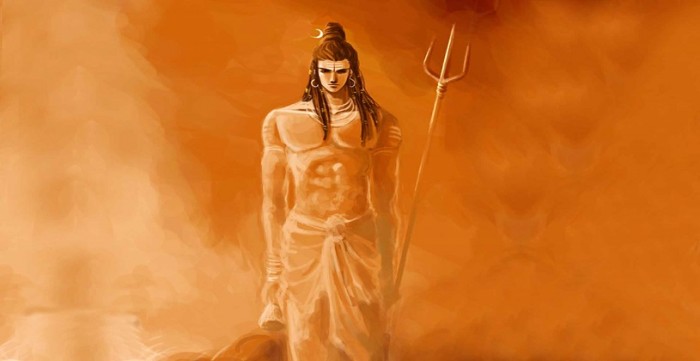 When it comes to religion and god, people often mistake the whole arrangement as some magical experience, but in reality symbolism in religions is backed up by modern science. When curious minds raised questions like how, when and why of life and its origin, to which there was no simple explanation, symbolism came to the rescue of the simple minds.

Hinduism is a religion of 330 million gods. Lord Shiva also called as Mahadev is one of the most prominent gods of the Hindu pantheon. The depiction of Lord Shiva in the Hindu mythology is based on the Vedas which uses symbolism to show a different aspect of life, its origin, and destruction. He is seated on a skin of a tiger, a number of cobras all around his neck, his long dreadlock type hair with a messy bun up top, the crescent that he wears on the top of his hair, the sacred river Ganga falling from his head and flowing by his side who was brought down from heavens by Bhagiratha, the trident (Trishula) with a drum called Damru tied to it neck, the symbol of his power, the sacred bull (Nandi).

Apart from these symbols, another very important physical characteristic of Shiva is his vertical third eye. Lord Shiva is also worshiped in the form of Shiva Lingam which again is a symbolic representation of the Trimurti (the creator, the preserver, and the destroyer).

Curated below is an  interesting list of scientific facts about Lord Shiva. 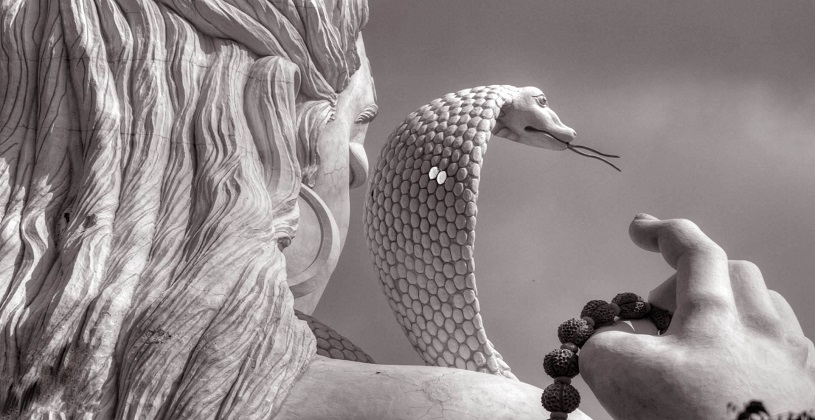 A snake is very sensitive to certain energies. Shiva has the snake around his throat. It is not just symbolic. There is a whole lot of science behind it. There are 114 chakras in the energy body. Out of these 114, people are usually talking about the seven fundamental chakras in the system. Among these seven fundamental ones, the vishuddhi chakra is located in the pit of your throat. This particular chakra is very strongly associated with the snake. The vishuddhi is about stopping poison, and a snake carries poison. All these things are connected.

The word vishuddhi literally means “filter". If your vishuddhi becomes powerful, you have the ability to filter everything that enters you. Shiva’s center is supposed to be vishuddhi, and he is also known as Vishakantha or Neelakantha because he filters all the poison. He doesn’t allow it to enter his system.

Poisons are not necessarily that which you may consume through food. Poisons can enter you in so many ways: a wrong thought, a wrong emotion, a wrong idea, a wrong energy or a wrong impulse can poison your life. If your vishuddhi is active, it filters everything. It saves you from all these influences. In other words, once vishuddhi is very active, that person is so powerful within himself that whatever is around him does not influence him anymore. He is established within himself. He tends to become a very powerful being.

2) Hidden Science Behind The Shiva's Crescent 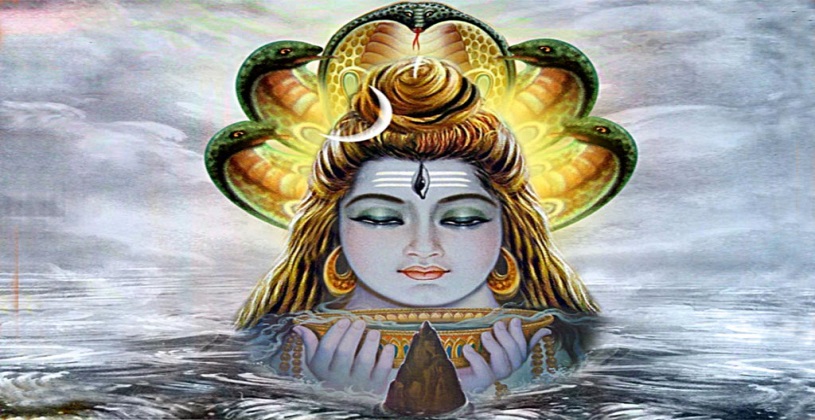 There are many names for Shiva. One name that is very commonly used is Soma or Somasundara. Soma could literally mean the moon (or Crescent), but soma essentially means inebriation or intoxication. Shiva uses the moon as a decoration because he is a great yogi who is intoxicated all the time, but he sits in great alertness. To enjoy the intoxication, you must be alert. Even when you drink, you try to stay awake and enjoy the intoxication. And that is how yogis are – totally drunk, but fully alert.

The science of yoga gives this pleasure to you to be internally drunk all the time, but one hundred percent stable and alert. There has been a lot of research in the last couple of decades, and a particular scientist found that in the human brain, there are millions of cannabis receptors. If you simply keep your body in a certain way, the body will produce its own narcotic, and the brain is waiting to receive it. It is only because the human body produces its own narcotic that feelings of peace, pleasure, and joy can happen within you without any stimulus from outside.

When the scientist wanted to give this chemical an appropriate name, he came down to India and found the word Ananda, or bliss. So he called it Anandamide. If you generate a sufficient amount of Anandamide  (2.1) in your system, then you can be drunk all the time, but fully awake, wide awake.

3) The Secrets Of Trishul 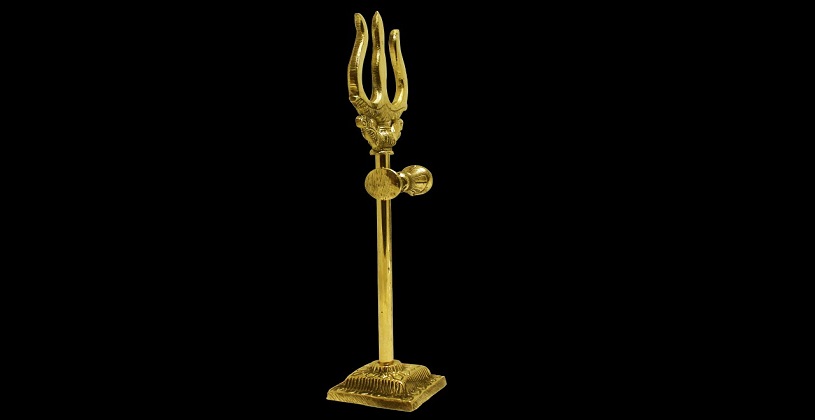 The Pingala and Ida represent the basic duality in the existence. It is this duality which we traditionally personify as Shiva and Shakti. You can simply call it masculine and feminine. When I say masculine and feminine, I am not talking in terms of sex – about being male or female – but in terms of certain qualities in nature. You could say the logical and the intuitive aspect of you.

Bringing a balance between the Ida and Pingala will make you effective in the world; this will allow you to handle life aspects well. Most people live and die in Ida and Pingala. Sushumna, the central space, remains dormant. But Sushumna is the most significant aspect of human physiology.

Life really begins only when energies enter into Sushumna. You attain to a new kind of balance, an inner balance where whatever happens outside, there is a certain space within you that never gets disturbed and cannot be touched by outside situations.

According to the legends, this is the same weapon with which Lord Shiva beheaded Lord Ganesha, oblivious to the fact that he is his son.

4) Shiva's Drum Is Not Only A Musical Instrument 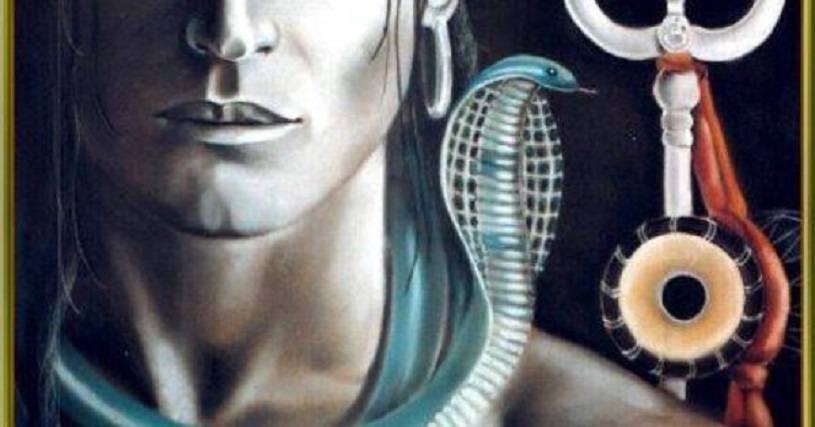 Damru symbolizes the Universe which is always expanding and collapsing. From an expansion it collapses and then it re-expands, this is the process of creation.

If you see your heartbeat, it is not just one straight line but it is a rhythm that goes up and down. The whole world is nothing but rhythms; energy rising and collapsing to rise again. So the damru signifies that. Look at the shape of the damru, from expansion it collapses and again expands. 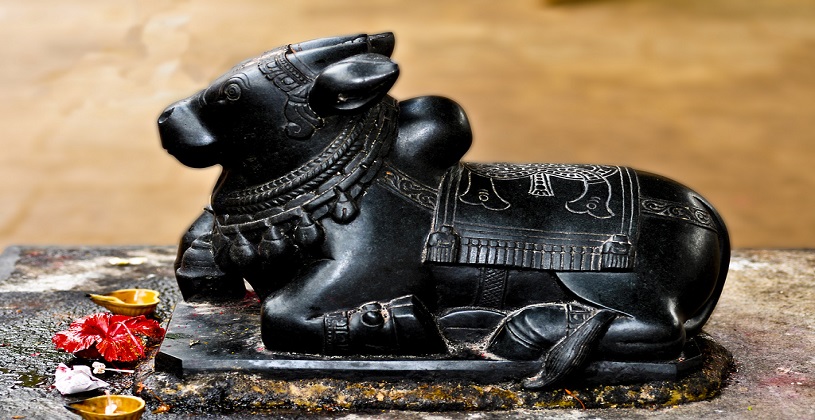 Nandi is a symbolism of eternal waiting because waiting is considered the greatest virtue in Indian culture. One who knows how to simply sit and wait is naturally meditative. Nandi is not expecting Shiva to come out tomorrow. He is not anticipating or expecting anything. He is just waiting. He will wait forever.

People have always misunderstood meditation as some kind of activity. No – it is a quality. That is the fundamental difference.

Prayer means you are trying to talk to God. Meditation means you are willing to listen to God. You are willing to just listen to existence, to the ultimate nature of creation. You have nothing to say, you simply listen. That is the quality of Nandi – he just sits alert. This is very important – he is alert, not sleepy. He is not sitting in a passive way. He is sitting, very active, full of alertness, full of life, but just sitting – that is meditation. 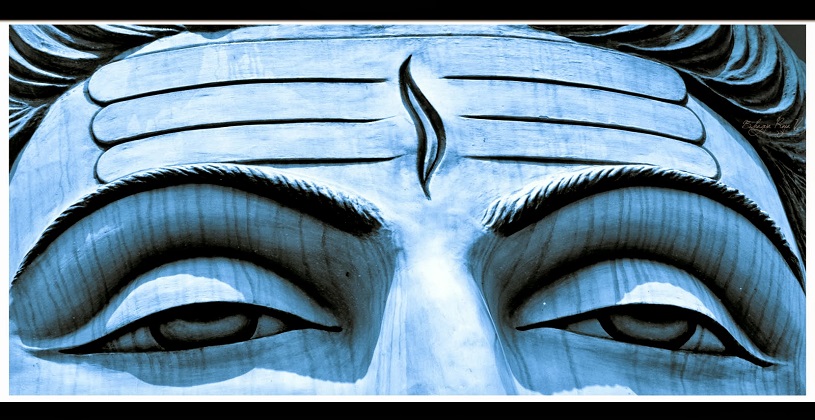 The third eye is the eye of vision. The two physical eyes are just sensory organs. They feed the mind with all kinds of nonsense because what you see is not the truth. You see this person or that person and you think something about him, but you are not able to see the Shiva in him. You see things the way it is necessary for your survival. Another creature sees it another way, as is necessary for its survival. This is why we say this world is maya. 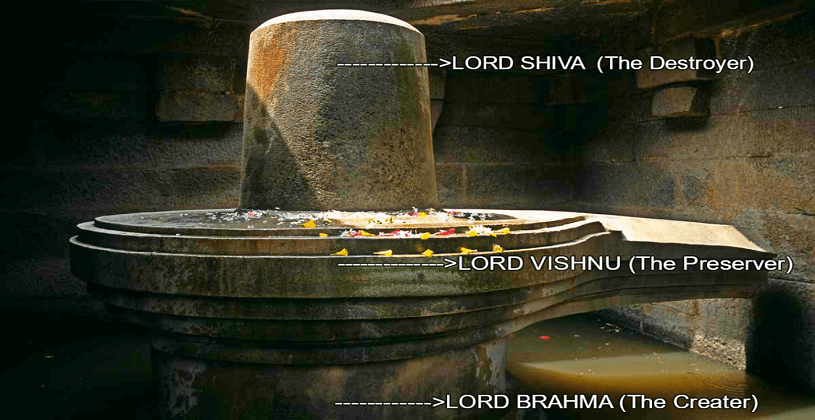 A glance at the image of Shiva Lingam shows there is a pillar with three marks and a Disc beneath it and sometimes with a coiling cobra snake with its fangs above the pillar. The truth behind the scientific research by the danish scientist, Neils Bohr, demonstrates that Molecules (the smallest part of everything) made up of Atoms which consists of Proton, and Electron, all of which play a vital part in the composition of Shiva Lingam.

According to Hinduism, the Pillar is described as the column of fire which represents the three Gods – Brahma, Vishnu and Maheshwara while the Disc or Peedam represents Shakti. The Disc is shown with three ridges, carved at its periphery.

An examination of the image of Shiva Lingam in the context of Bohr model, would demonstrate the puzzling truth that Brahma has created the world. The behavior of Proton, Electron, Neutron and Energy are well demonstrated by Shiva Lingam.

PS: We have no intent to hurt any religious value through this post. The facts, trivia and scientific statements are compiled from various sources.

What Lies In Between Scylla And Charybdis? A Mysterious Greek Myth Turned Idiom