Take a Dive Into the Isolated Palau Lake Teeming With Jellyfish

If you’re looking to swim in an isolated lake brimming with gentle jellyfish, Palau Jellyfish Lake is where you’d get a chan... 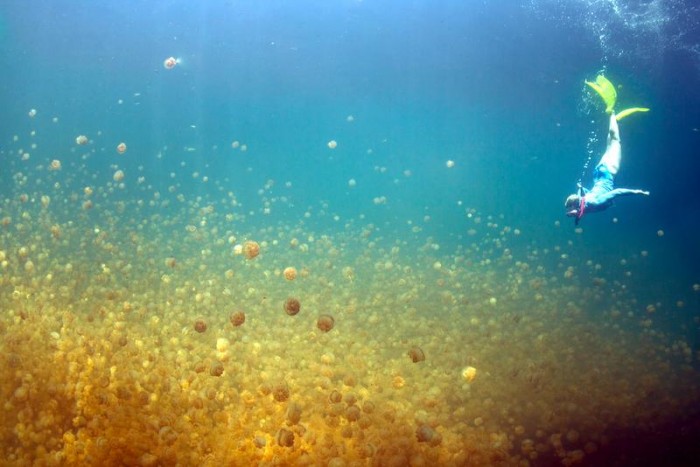 If you’re looking to swim in an isolated lake brimming with gentle jellyfish, Palau Jellyfish Lake is where you’d get a chance to do just that. One of the 70 marine lakes on the South Pacific archipelago, this UNESCO World Heritage site is located off the coast of the uninhabited rock island called Eil Malk near Koror, Palau.

A quotidian migration of millions of moon and golden jellyfish occurs in the lake. The golden jellyfish ‘Mastigias’ and moon jellyfish ‘Aurelia’ have probably evolved in the lake as substantially different species as compared to their close relatives living in the neighboring lagoons. However, there were recent reports of a drastic decline in the lake, caused possibly due to El Nino. 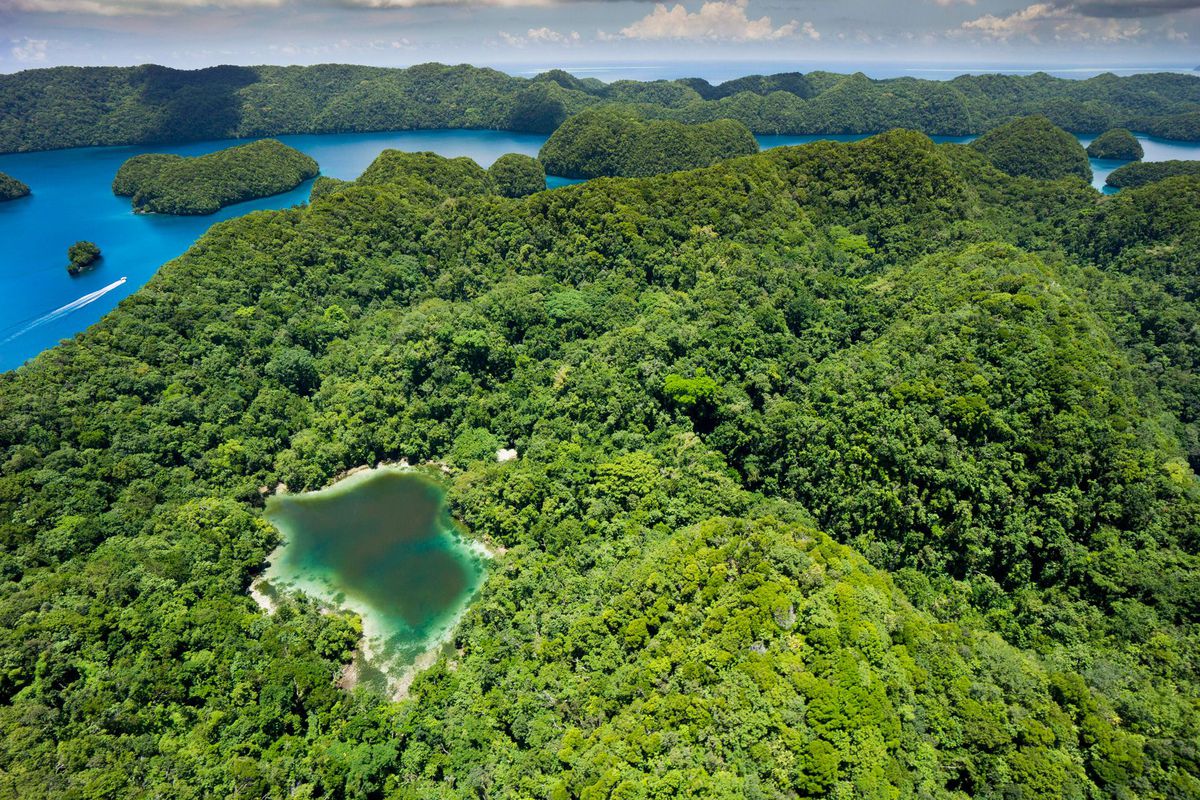 Palau Jellyfish Lake is around 12,000 years old. Its age was found out by estimating the depth of the lake (nearly 30 m), the sediment (at least 20 m), and the rising sea level after the end of the last ice age. Nearly 12,000 years back, the sea level had gone up to the point that seawater started filling the Jellyfish Lake basin. 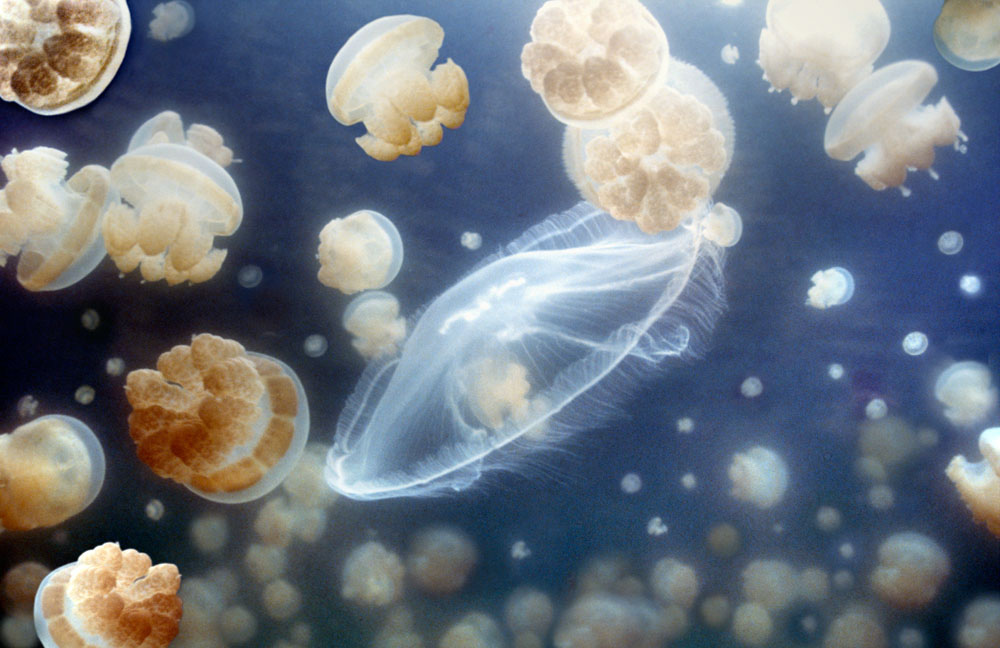 Both of These Jellyfish Species Migrate on a Daily Basis 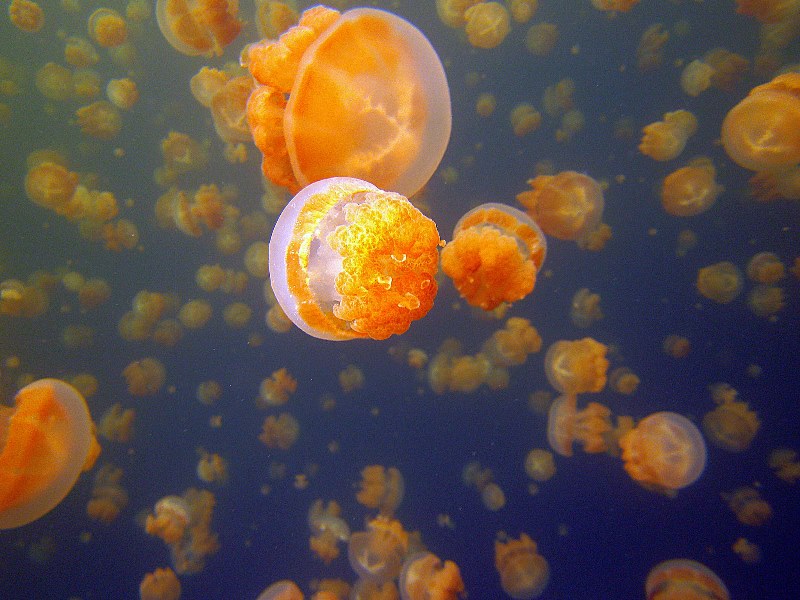 The migration pattern of golden jellyfish in Jellyfish Lake is much the same as that of Mastigias sp. in other Palauan saltwater lakes and coves. And the jellyfish in these lakes/coves migrate horizontally from west to east in the morning. 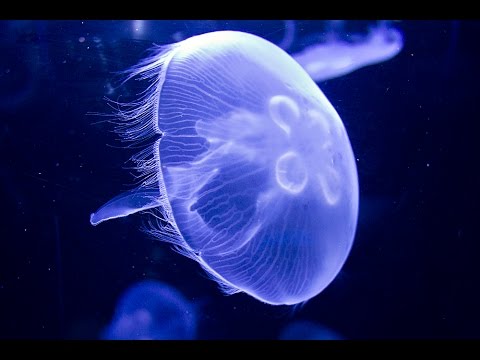 Medusae Population Has Been Dwindling Significantly in the Jellyfish Lake 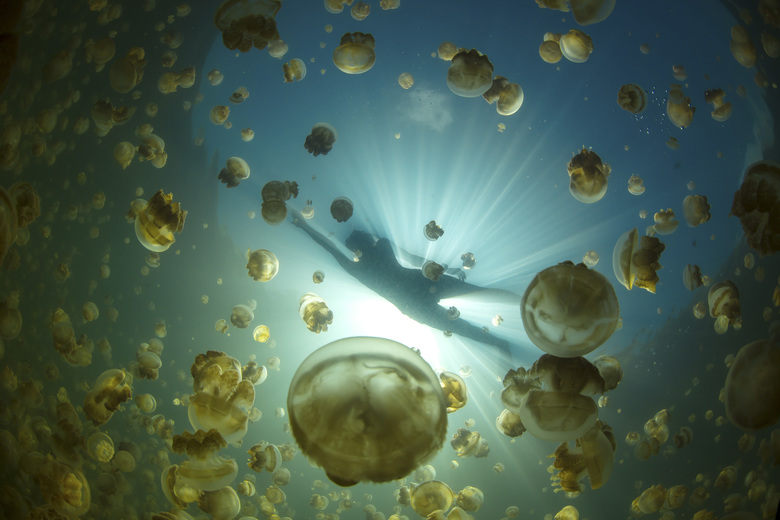 In 1987, a sharp shrinkage was noted in the Jellyfish Lake medusae population. This caused the die-out of the scyphistoma (scyphozoan polyps) and algae-like organisms (Zooxanthellae) that live within the golden jellyfish medusae. Formerly attributed to turbulence (that disturbed the toxic layer) generated by scuba diving, an unusual rise in water temperature (El Nino) was found to be the most likely reason. 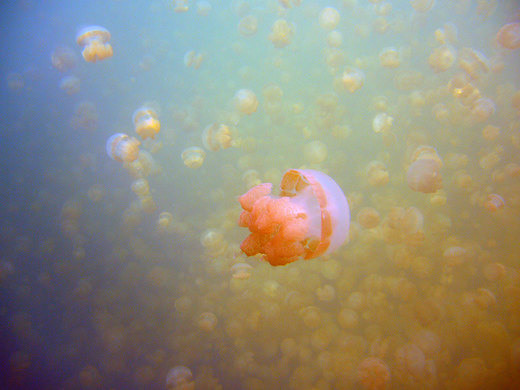 During 1998, the moon jellyfish also showed unusual damage but its population did not appear smaller than usual. In January 2000, the golden jellyfish medusae were seen for the first time in the lake since April 1999. And later in May 2012, the medusae population had reached the pre-decline levels.

In March 2016, the population has been "on the verge of crashing" according to the California and Palau-based Coral Reef Research Foundation. The group estimates the jellyfish population to be 600,000 from an average of 8 million. (17.2)

But There’s a Hope for Comeback 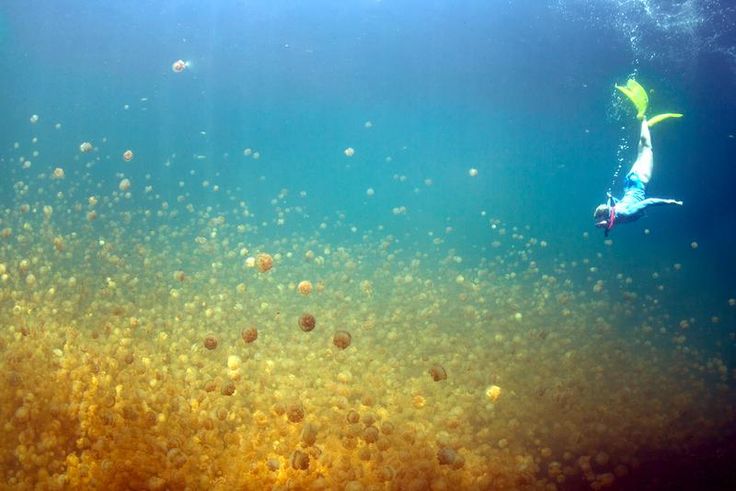 It’s not clearly been known as to when the migration may come back to the region. Just like the jellyfish decline happened during the late 1990s when they had recovered from the surviving polyps, the observers are hopeful that there will be enough polyps to ensure the eventual recovery of the population.