Eta by Aerovalo is the world’s fastest bike with a breakneck speed of 89.59 mph (144.17 kph). It is an egg-shaped aerodynamic bicycle that nailed it at the annual World Human-Powered Speed Challenge. 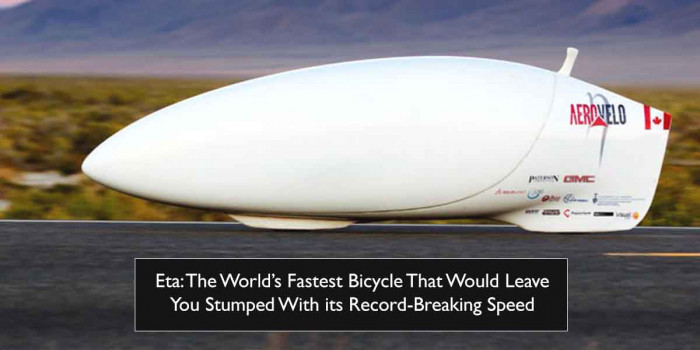 We have read and heard a lot about different kinds of vehicles that come with extraordinary features like speed, braking system, fuel efficiency, and more. Some cars and bikes can run over water and have breakneck speeds of vehicles, but this speed bike is something you may have never seen or heard of as it is the fastest bike on Earth.

A Canadian engineering company & innovation lab, Aerovelo, named this bike as Eta- the Greek symbol for that denotes efficiency in engineering. It has a unique shape of a bullet that allows the speed bike to face minimum resistance from air, and the large outer shell/frame is made of carbon fiber. According to the analysis of the vehicle performance, it showed that it requires less than 198 Watts of pedal power at 90 kph, leading to 9544 mpg highway fuel efficiency. It is better than efficient electric cars. It happens to be the highest per-passenger mpg of any extant transportation technology at this speed. Also, the pilot’s energy output is roughly equivalent to the amount required to light up three light bulbs. World-class cyclists in the Tour de France generally hit a maximum speed of 40 mph on flat streets. Eta bike more than doubles the figure. Also, it is three times faster than a normal bike and is built with an extremely low center of gravity. It also has an onboard computer that offers a HUD to learn about the precise time to sprint during a speed run.

A physically fit driver is seated in a specialized, ergonomic recumbent layout (seating and pedals) that leans backward. It boosts the bike’s ability to attain high speeds by reducing body pressure and focusing all the energy only on the rider’s legs. The rider here relies on two video cameras for vision (no windows) installed on top of the bike’s oval shell.

This world’s fastest bicycle is innovative and embodies athleticism. It benefits from the fully enclosed bodywork with drag over 100 times less than that of most of the streamlined cars. Each element of the design is speed-optimized, right from low-drag bearings to the world’s best handmade ultra-thin tires.

Aerovelo’s Eta Bike is lightweight and weighs about 55 pounds. It received funding from the University of Toronto, GMC, Paterson composites, Solidworks & most notably, Google. Before this, the founders of Aerovelo built a pedal-powered ornithopter. They developed a human-powered helicopter, Atlas, flew for more than 60 seconds at an altitude of 3.3m to win the Sikorsky Challenge along with the prize money of $250,000.

The International Human Powered Vehicle Association (IHPVA) registers the records, and the world human-powered speed challenge attracts the attention of designers and athletes from across the globe to test their high-tech speed bikes on the world’s highest, flattest & straightest road- highway 305.

Here's How Google Grew From 0 To 498 Billion Dollar