Who Wins The 1000 Feet Drop Test? Google Pixel Or iPhone 7

There is a rising debate over Google Pixel and iPhone 7 all around. What’s your take on this? Well, there is actually a test t... 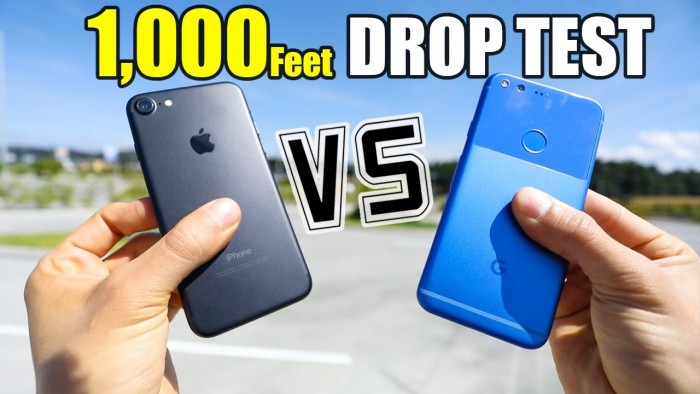 There is a rising debate over Google Pixel and iPhone 7 all around. What’s your take on this? Well, there is actually a test that can question the commitments of these companies. Who do you think would survive if both the phones are dropped off from a height of 1000 feet?

Obviously you won’t get along with your friend and compete with your phones but some other person has done this.

Unlock River is a YouTube channel has conducted this test. The host introduces us to the drop test. Google Pixel and iPhone 7 will be dropped by a drone from a height of 1000 feet. In the mid-air they will be released and go into free fall.

Let’s find out which phone survives the test.

Well, as you saw, both the phones have been damaged. Neither was able to survive the drop test. But it turns out that Pixel was damaged less. Screens of both phones were completely shattered and are no longer useful. Besides, the screen Pixel remained largely undamaged. Its back portion is intact while iPhone has got scratches on its back. The camera is also broken and the sim card trade was lost during the drop.

Clearly, the screens are extremely damaged but the back parts make the difference. Google Pixel did way better than iPhone 7.

So, the winner of this drop test is Google Pixel.

This Printer Fits In Your Pocket And Works Anywhere