Kill Vehicle: The Anti-Ballistic Missile System That Act as the First Line of Defense

The kill vehicle belongs to space weapon development and science fiction. It’s either a kinetic projectile or an explosive warhead that impacts the target, and it is the final missile stage of the interceptor weapon. 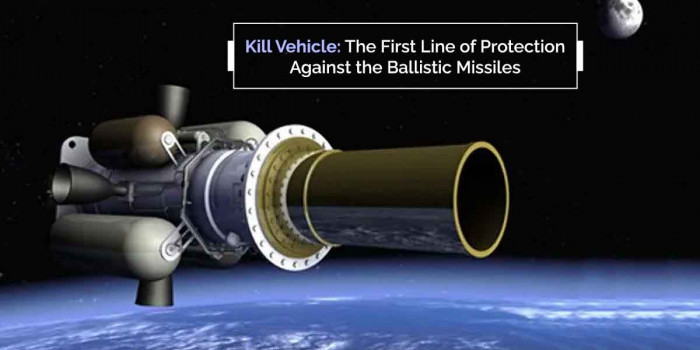 A kill vehicle is a highly developed kinetic projectile or explosive warhead that destroys long-range ballistic missiles outside the Earth’s atmosphere utilizing the sheer force of impact. The “hit-to-kill” technology has been compared to a bullet hitting a bullet. The huge collision of a kill vehicle hitting its goal destroys the threat entirely, and explosives are not essential.

Kill vehicles are crucial because they are the first line of defense against the increasing threat of extensive-range ballistic missiles. Ballistic missiles travel in space and could carry destructive payloads targeted at significant infrastructure or population centers.

The US Department of Defense is building an integrated BMDS (Ballistic Missile Defense System) to give national-level safety from ballistic missile attacks. BMDS will include a layered defense design to engage threat missiles at the earliest opportunity.

By leveraging decades of practice or experience across different kill vehicle programs and huge strategic weapon expertise across each domain and mission area, Raytheon is meeting the crucial requirements of today and arranging for the threats of tomorrow.

Raytheon is the only organization working on four kill vehicles altogether, offering a pipeline of critical lessons learned. Factories and laboratories are packed with experts whose experience and knowledge are irreplaceable.

The various kill vehicles are:

Manufactured by Raytheon, it is the interceptor component with a subcontractor Aerojet US Ground-based Midcourse Defense (GMD), which is part of the National Defense System. It is boosted to an intercept trajectory by a boost vehicle (missile) where it gets separated from the boost vehicle and autonomously collides with an incoming warhead.

It is launched by the GBI (Ground-Based Interceptor) missile, which is the GMD’s launch vehicle. Its rockets and fuel do not provide acceleration and correct the trajectory. The EKV’s successor is Redesigned Kill Vehicle (RKV).

A part of the Aegis Ballistic Missile Defense System, the US Navy uses the RIM-161 Standard Missile 3 (SM-3) that is a ship-based missile to intercept short- and medium-range ballistic missiles. It is launched from the Aegis cruiser USS Lake Erie.

It is primarily an anti-ballistic missile but is also employed in an anti-satellite capacity against a satellite at the lower end of low Earth orbit. The US Navy primarily used and tested it and is also operated by Japan Maritime Self-Defense Force.

As mentioned earlier, Redesigned Kill Vehicle (RKV) is the successor of EKV. It was scheduled to release in the year 2025. Headed by Boeing and lead subcontractor Raytheon, the Department of Defense canceled the RKV program on 21 August 2019.

In 2019, the Pentagon issued a stop-work order on the project due to the design review deferment in December 2018 as the failure of critical components occurred while meeting technical specifications.

The MKV concept offered the capability for over one kill vehicle to be launched from a single booster. It included a carrier vehicle with onboard sensors and various kill vehicles, each equipped with its navigation thrusters. Due to its multiple kill vehicles on a single target cloud, the probability of a hit on the actual warhead is enhanced. The system’s capability to intercept multiple independent targets was also planned for testing.

The goal of the MKV mission was to destroy medium-range through intercontinental-range ballistic missiles equipped with multiple warheads or countermeasures by using a single interceptor missile. Using tracking data from the Ballistic Missile Defense System and its seeker, the carrier vehicle would’ve dispensed and guided the kill vehicles to destroy any warheads or countermeasures.

Kill vehicle is the final missile stage of an interceptor weapon. It plays a vital role in the National Missile defense system of the United States, and a great amount of destructive energy gets released during the process.

Get Sharper and Clear Images with Phase One XF 100MP Camera