A flipbook or flick book is a booklet with a series of images that change from one page to the next. It appears to be animated when viewed quickly. Check out Juan Fontanive’s incredible flipbook art here. 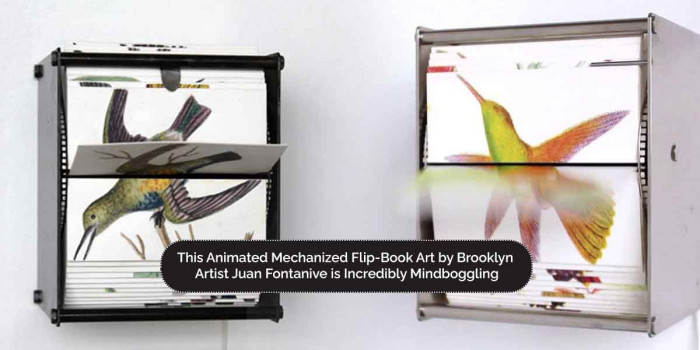 Do you know that flip-books are often illustrated books for children? You can’t help but appreciate how Brooklyn artist Juan Fontanive’s animated & mechanized self-flipping flip-books bring the pictures to life. A graduate from the Royal College of Art, he presented at the Riflemaker Gallery show in London opening on 9 May 2016. He has been exploring moving images and kinetic sculptures.

With a blend of animation and machines, Fontanive creates fascinating artwork that redefines the traditional practice of sculpture. His big kinetic sculptures dominate the gallery space, thereby creating an environment stimulated by moving abstract shapes and the repetitious drone of metal parts. His smaller, mechanized flipbooks present vibrant hummingbirds and butterflies in flight. His “Films Without Light” are beyond the illusion of animation: every page turn mimics the subject’s fluttering wings.

He earlier constructed unceasingly looping flipbook machines showing flying birds lifted from Audubon guides and illustrations of butterflies. It is partly film & partly sculpture, and almost every aspect of the flipbook is hand-assembled from the tiny-toothed gears, clips, nuts, bolts, worm wheels, and sprockets to the meticulously screen printed imagery. Gild Williams said,

“Fontanive’s artworks seem strangely possessed, producing curiously moving animals that are neither living nor dead, or creating ghostly systems which seem to float mid-air and follow a pace and logic of their own.”

In New York, Juan’s nine robotic flipbooks can be viewed at Danese/Corey Gallery, and every 72 double-sided screenprints from Juan’s original hand-drawn images (Graphite, acrylic, and colored pencil on paper, aluminum/stainless steel, Delrin, motor, and electronics) of life-sized insects. In his other work, he creates the illusion of movement from various hummingbird species on each page. His two original machines, like Ornithology and Colibri, are presently available through the New Museum.

The flipbooks do not translate to films all the time. It involves a great deal of physicality and life-size feeling on a computer screen, but blurriness is there because of a dissimilar frame rate from paper to camera. The backroom intended for the display is small, with the surround sound symphony of page flips being truly amazing.

A flipbook or flick book is a series of images that gradually change from one page to the next so that the images on the pages appear animated when viewed in quick succession and simulating motion. And Juan has taken the flipbook art to a whole new level!

Indeed, the bird-themed illustrated flipbook by Juan showcases the intricate detail with every flip and is amazing enough to inspire any and every artist in the world.

Eelume: A Giant Subsea Snake Robot So Flexible That it Can Work in Confined Spaces

Biski: The Amphibious Motorbike That You Can Ride on Road & Water