Electromagnetic Railgun | The Deadly Weapon That Only India & US Has

Railgun is an Electromagnetic alternative to explosives and nuclear warheads, it is the most efficient and lethal weapon of the 21st century. 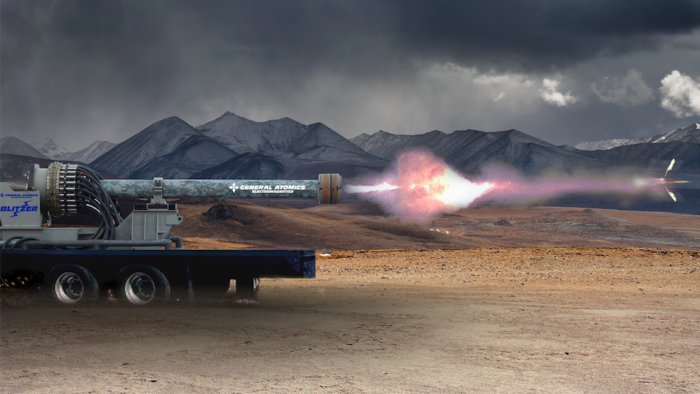 The EM Railgun launcher is a long-range weapon that fires projectiles using electricity instead of chemical propellants. Magnetic fields created by high electrical currents accelerate a sliding metal conductor, or armature, between two rails to launch projectiles at 4,500 mph.

It can seen with the defence budgets of the countries that the most of the nation’s GDP is spent on weapons instead of sustainable living alternatives. Railgun is a result of one such research programs for the development of new-age arsenal.

Electricity generated by the ship is stored over several seconds in the pulsed power system.

Next, an electric pulse is sent to the railgun, creating an electromagnetic force accelerating the projectile up to Mach 6. Using its extreme speed on impact, the kinetic energy warhead eliminates the hazards of high explosives in the ship and unexploded ordnance on the battlefield.

How Does Different Part Of The Railgun Function 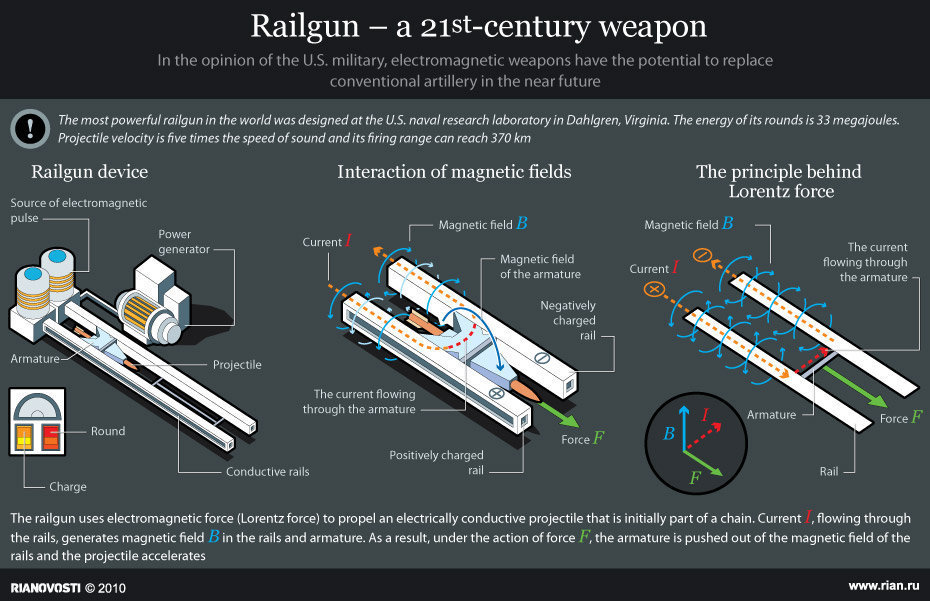 A rail gun is basically a large electric circuit, made up of three parts: a power source, a pair of parallel rails and a moving armature.

3 Km/s At The Stage Of Development, Railguns Are Capable Of Reaching Speed Of Sound

Railguns are being researched as weapons that would use neither explosives nor propellant, but rather rely on electromagnetic forces to impart a very high kinetic energy to a projectile (e.g. APFSDS). While explosive-powered military guns cannot readily achieve a muzzle velocity of more than about 2 km/s, railguns can readily exceed 3 km/s, and perhaps exceed conventionally delivered munitions in range and destructive force.

The absence of explosive propellants or warheads to store and handle, as well as the low cost of projectiles compared to conventional weaponry come as additional advantages.

Things That Doesn’t Work In The Favour Of Railguns

In theory, railguns are the perfect solution for short- and long-range firepower. In reality, they present several serious problems:

Power Supply: Generating the power necessary to accelerate rail gun projectiles is a real challenge. Capacitors must store electric charge until a sufficiently large current can be accumulated. While capacitors can be small for some applications, the capacitors found in railguns are many cubic meters in size.

Resistive Heating: When an electric current passes through a conductor, it meets resistance in the conductive material -- in this case, the rails. The current excites the rail's molecules, causing them to heat. In railguns, this effect results in intense heat.

Melting: The high velocity of the armature and the heat caused by resistive heating damages the surface of the rails.

Repulsion: The current in each rail of a rail gun runs in opposite directions. This creates a repulsive force, proportional to the current, that attempts to push the rails apart. Because the currents in a rail gun are so large, the repulsion between the two rails is significant. Wear and tear on rail guns is a serious problem. Many break after a few uses, and sometimes they can only be used once.

Recent Developments And Tests In Practice

Indian defense scientists have successfully developed electromagnetic railguns (EMRG) that can fire projectiles at Mach 6 (six times the speed of sound) or 4,600 miles per hour. Such railguns are touted as one of the future technologies of warfare, as they use kinetic and laser energy instead of controlled explosives for firing missiles.

The revolutionary railgun relies on a massive electrical pulse, rather than gunpowder or other chemical propellants, to launch projectiles at distances over 100 nautical miles – and at speeds that exceed Mach 6."