Bugatti Chiron is a combination of innovative technology, groundbreaking engineering, and true luxury. This 2-seater is the fastest, most powerful & exclusive sports car. 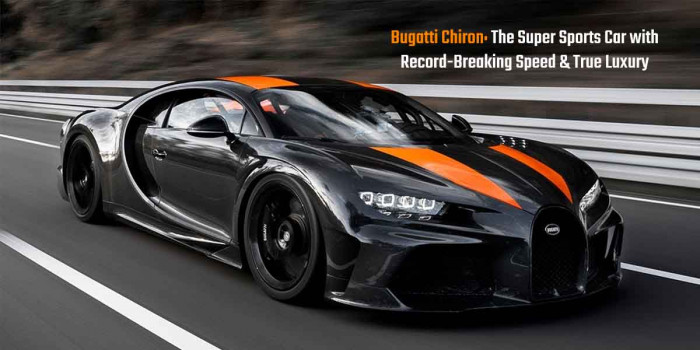 How can you surpass or get past the world’s fastest production car- Bugatti Veyron? Bugatti’s answer to this question is one and only Chiron, Veyron’s successor. Manufactured by the Molsheim-based French automobile manufacturer Bugatti Automobiles S.A.S., it is a mid-engine 2-seater sports car.

It was first exhibited at the Geneva Motor Show on 1 March 2016. The car’s name is coined after a Monegasque driver named Louis Chiron. It shares its name with the 1999 car named Bugatti 18/3 Chiron concept car. Also, it is based on the Bugatti Vision Gran Turismo concept car. The designers of the car are Achim Anscheidt (Head of Design), Frank Heyl, Sasha Selipanov, and Etienne Salome.

Let’s know about its extraordinary specifications, features, and records.

Bugatti Chiron’s 8.0-liter W-16 engine uses four turbos to create 1500 HP for what will certainly be heroic acceleration and an evaluated top speed of 288 mph. Four-wheel driving sets all the power down via a seven-speed automatic.

The Chiron would appear to be assembled on the lines of the Veyron, a strong and heavyweight two-seated coupe that has made the world record of 267.7 mph for a street-legal automobile in Super Sport trim.

It has the LED illumination in the distinctive C-line form separating the two seats. The car’s cockpit layout offers the essential info within his/her range of vision. It displays a 500 kmph mark mechanical speedometer. On the central console, every unit has independent and adjustable displays.

The Skyview option was developed based on characteristic attributes of the Chiron car. It has a distinctive C-bar on the side, horseshoe grill, and pronounced lines and generous surfaces. The glass roof gives a view into another dimension & the cockpit had natural light.

It offers an unmatched 3D experience. The two glass elements are installed on either side of the central fin, which extends beyond the car’s carbon-fiber body and stretches towards the signature line.

At the 2017 IAA show in Frankfurt, Bugatti declared that the Chiron broke the record of fastest acceleration time (0-249-0 mph) in 41.96 seconds within 2 miles at the Ehra-Lessien high-speed oval. Colombian racing driver Juan Pablo Montoya drove the car. Also, it mentioned that during the run, the car had acceleration times faster than its predecessor, Veyron.

Then in Aug 2019, Bugatti test driver Andy Wallace reached the top speed of 304.77 mph in a pre-production Chiron Super Sport 300+ prototype at Volkswagen’s test facility in Ehra-Lessien. The GermanInspecion Association  TUV verified the speed, and it thus became the first production vehicle to cross the 300 mph barrier.

The different variants of Bugatti Chiron include Chiron Sport, 110 Ans Bugatti, Chiron Super Sport 300+, Chiron Pur Sport, and Chiron Noire. They all have their specific features, specifications, and attributes.

Have you ever test-driven or own any of these Bugatti Chiron car models? Which feature of the car do you like the most?