Every love story is beautiful in its way. Whether you get married to your childhood lover or someone whom you met four months ago, love is a beautiful bond between two people.

Indeed! Love can happen anytime and anywhere. Humans have grown up hearing romantic love stories of Romeo and Juliet and Rani and Sukh. Everyone wants to fall in love with someone who could understand them, love their madness, and never stop choosing you.

Whether you are a teen or an adult, you must have read love stories once in your lifetime. Getting married to your dream person is still a dream for many. Lucky are those who get the right person at the right time. Here is a story of a girl who married the man who saved her in a mass shoot.

It was in 2017 when Chantal Melanson was enjoying with friends at a bar, and a man came over to chat. She was dancing with her friends and ended up laughing when he introduced himself as Austin Monfort. Melanson said that at first, she ignored him, as she was enjoying time with her friends. Later, he made a move and then again tried contacting her.

She had no idea that 24 hours later, this man would save her during the mass shooting at Las Vegas.

Neither of them ever imagined that their love story would be started this way. The stranger, Austin Monfort (now her husband), again tried talking to her, and the two danced the whole night, and then exchanged the numbers. 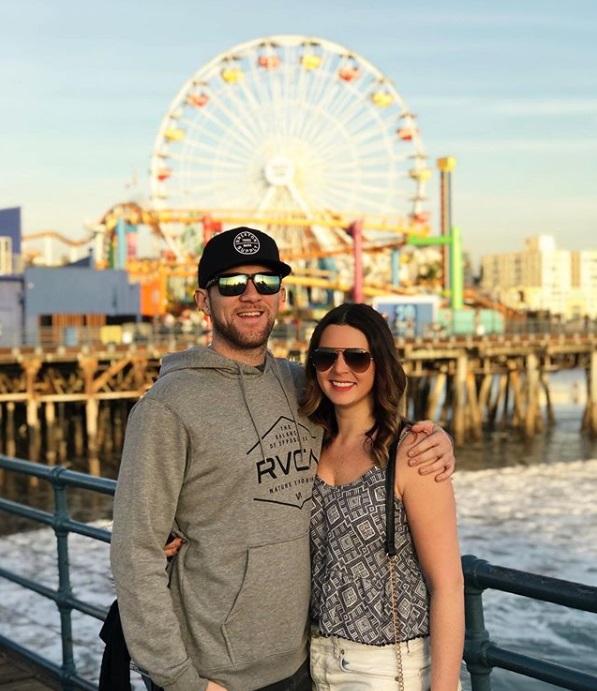 The two came for the Route 91 Harvest music festival and then planned to catch up the next day for a concert. Melanson left her friends there, and she went out with Monfort during Jason Aldean's headlining set.

The next day on 1st October 2017, he texted Melanson to meet him and to watch the final night of the concert together. While watching the concert, they heard loud bangs, which they thought were fireworks. In reality, the sound came from 64-year-old Stephen Paddock firing shots from the 32nd floor of the Mandalay Bay hotel onto the 22,000 concertgoers below.

Later, they understood that this sound was not of fireworks, but they were gunshots.

“We were just listening to music having a good time. Until we realized that the noises weren’t fireworks, they were gunshots. Then it became, 'Am I going to survive this, how much longer until police can make it stop, and how do we get out of here?’”

He felt that Melanson should be protected first, as she left her friends to spend time with him, and she is his responsibility. He said,

“I felt like not only did I have to get myself out, but also her. Keeping her calm and getting her out kept me calm, and didn’t allow me to panic.”

She recalled how he kept her safe and held her hands. Then they ran through the grounds to reach another location.

“Next thing I knew, Austin was holding my hand and we were running through the entire grounds trying to make it to safety.”

This deadly mass shooting killed over 60 people and injured nearly thousands. The couple was together throughout the night and then early morning parted ways. After this tragedy, they stayed in touch and eventually came into a relationship. Surprisingly, the two got engaged in 2019 and then planned to get married in 2020.

She captioned their engagement photo as-

“Less than 24 hours after meeting each other we were in a mass shooting together and he never left my side. Almost two years later, living in two different countries, we have a fairytale love story."

Less than 24hours of meeting each other we were in a mass shooting together and he never left my side. Almost two years later, living in two different country, we have a fairytale love story ???? . Friday March 8th we headed to our favourite place to unwind Laguna Beach ???? we got ourselves a cute hotel room and we really didn’t make any plans other than spend time together and relax. It was a windy and chilly day by the water but we bundled up, Austin even wearing cowboys on the beach. Once we got down to thousand steps beach Austin gave me a hug. Right away I could feel his heart beating out of his chest. I asked him if everything was okay? . That’s when he looked at me got down on one knee, reached in his cowboy boot and made me the happiest girl in the world ???? . We sat on the beach, cracked open a beer and soaked it all in ???? the night was followed by an amazing dinner and celebration drinks at our favourite rooftop bar @skyloftoc . . #longdistancerelationship #isaidyes #engaged #fiance #heasked #howheasked #proposalstory #lagunabeachproposal #followforfollow #proposal #lovestory #howwemet #ourstory #ourlovestory #huffpostido #followourlovestory #lovejourney #followus #couplegoals #coupleinfluencer #influencer #k1visa #k1fiancevisa #sandiegoblogger #fiancevisa #route91strong #route91family #route91harvest #route91survivors #tragedytolove

Due to the coronavirus pandemic, their wedding was postponed. But this doesn’t stop them from celebrating their love story.

Our wedding was suppose to be Friday. Although we didn’t have the wedding we still wanted to celebrate us. We had a wonderful evening date in the backyard, with a few of our wedding signs, a wonderful dinner and champagne ???? ???? . Our hearts go out to everyone who had to postpone their weddings during covid, so much planning goes into the special day and it’s heartbreaking to have to cancel such a special day.

The couple is surprised how their love story is spreading a smile on everyone’s face in these critical times. She said,

“It's been so positive, we love to put a smile on people's face during such an uncertain time."

Don’t you think it is a fairytale love story? Did you notice that Melanson’s Instagram account is with the name tragedytolove?

Love has no boundaries. While some fall in love instantly, others who are in a relationship for over the years are still finding love. Another epic story that could make you believe in love more is of Erin and Jared. Read how a man has fallen in love with a woman who was earlier his male friend. Their journey as a couple was difficult, but then everything ended on a happy note.

Do you know other couples that shared this kind of love story? If so, then don’t forget to mention their names below.