PewDiePie- Journey From Being Zero To Hero 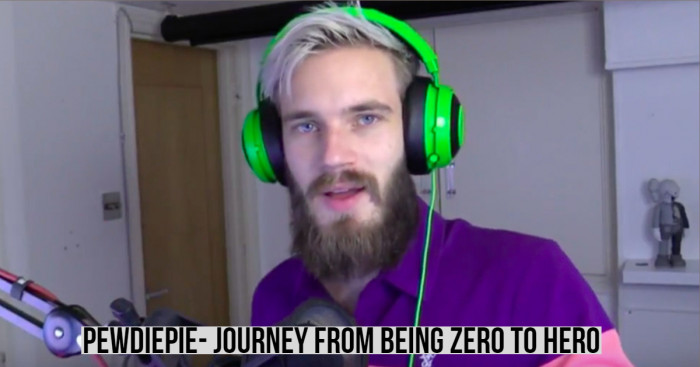 Felix Arvid Ulf Kjellberg known as PewDiePie is the most successful and richest Youtuber. He is noted for his exceptionally unique Youtube content which includes his distinct let’s play styled video commentaries. Moving to his background, he is 29 years old and was born on 24th October 1989. He is a Swedish citizen as he was born in Gothenburg, Sweden. Currently, he is living in Brighton, England, United Kingdom.

Kjellberg had an artistic bent since his schooling days unlike his parents Lotta Kristine Johanna who was the former CIO at KappAhl and father Ulf Christian Kjellberg who was also a corporate executive. Following his interest in art, he used to draw his version of popular video game characters such as Mario and Sonic the Hedgehog. He used to bunk his lectures to play video games with his friends. He highlighted the gaming culture and commented, “Sweden has a great culture around gaming.”

He graduated in 2008 from Goteborgs Hogre Samskola. Then he went to pursue his degree in Industrial Economics and Technology Management at Chalmers University of Technology which he left in 2011. He stated,

"Thinking about it now, it was utterly absurd. To get into Chalmers for industrial economics you need straight A's, but somehow I was happier selling hot dogs and making my own gaming-videos." 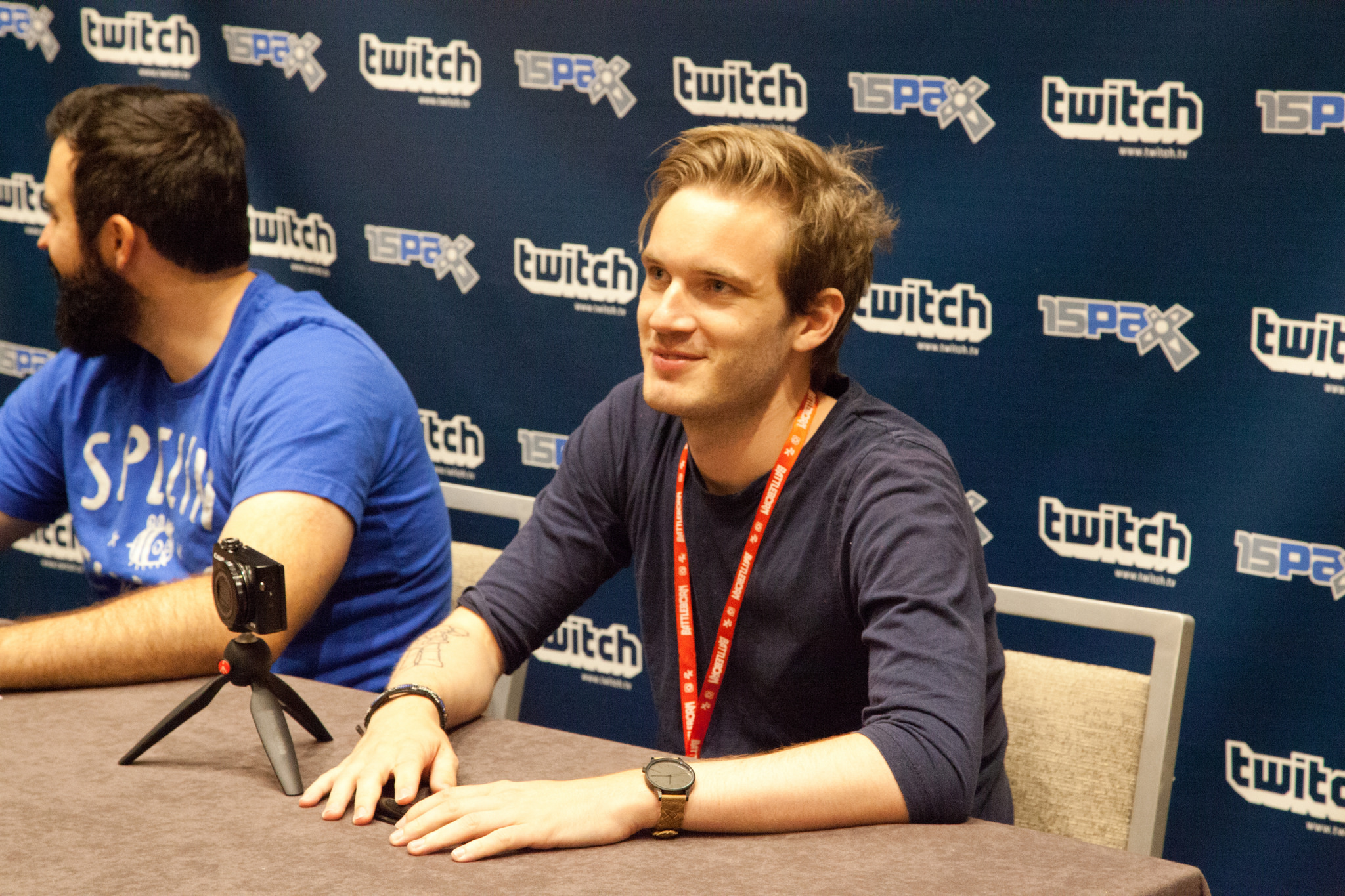 His move to drop out of the course in the middle was evident as he wanted to focus on his YouTube career. Later in 2017, he clarified stating that,

“Why does everyone get this story wrong? [...] I dropped out of university because I didn't like it. To drop out of university to pursue YouTube, that'd just be fucking stupid.” "industrial management and economics [was] boring as hell [...] [and] I couldn't relate to fucking anyone."

He had a desire of working on photo manipulation using Adobe Photoshop than studying in a school, and he also shared his love for photoshop. Following his passion, he participated in many photoshop contests and was expected to earn an apprenticeship at one of the best advertising agencies in Scandinavia but did not succeed. After a failed attempt to earn an apprenticeship, he sold limited edition prints of his photoshopped images and struggled his way to purchase a computer so that he can work on Youtube videos. 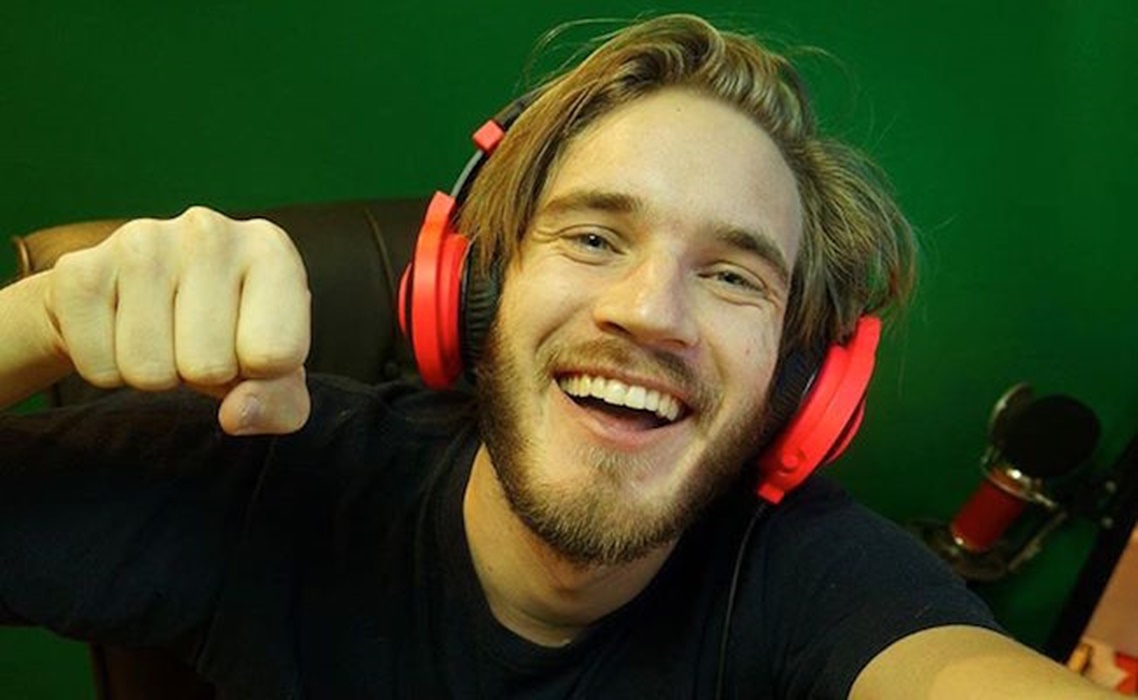 Coming on to his Youtube career, he started with the videos under the package of “Lets Play” that presented commentaries of horror games which was unique and one of its kind. The content was fresh and discrete in the initial stages of his career where he created a niche and then eventually expanded while maintaining the identity of the gaming channel.

According to a statement given by an American weekly, "PewDiePie acts like he's spending time with a friend. He begins each video introducing himself in a high-pitched, goofy voice, drawing out the vowels of his YouTube moniker, then delves into the videos."

ESPN noted that Pewdiepie used to refer his fan base as “Bro Army” and addressed his audiences as “bros” later. In his YouTube career, he stopped using it and often referred his fan base as “Squad Fam.”

As his popularity grew with time, he rose and expanded in terms of the content he offered to his fans. He started uploading modification of his content in the form of vlogs, live action, and animated comedy shorts. He also uploaded music onto his channel which was accompanied with animation and fan art. For his music videos, he had collaborated with The Gregory Brothers, Roomie, and Party in the Backyard.

Pewdiepie is known for his content and the style in which he presents his content. Although many of the outlets have described his content as goofy, zesty, obnoxious and filled with crude language, they eventually admitted that the content is genuine and unfiltered. Sarah Begley of TIME said he had an element of “charismatic narration.” Chris Reed of Wall St. Cheat Sheet said the videos had “off the cuff running commentary that’s characterized by goofy jokes, profanity and loud outbursts.”

Going through the older versions of his videos, he expressed regret on the use of casual words in a derogatory way like gay and retarded. He made some modifications in the type of content he used to present.

In December 2016, Kotaku’s Patricia Hernandez took notice of the stylistic changes that he brought to his content and wrote, "over the last year, the PewDiePie channel has also had an underlying friction, as Kjellberg slowly distances himself from many of the things that made him famous. He's doing fewer Let's Plays of horror games like Amnesia," and added, "the PewDiePie of 2016 can still be immature, sure, but [...] a defining aspect of recent PewDiePie videos is existential angst, as he describes the bleak reality of making content for a machine he cannot fully control or understand."

In August 2017, he called himself “just a guy making jokes on the internet.” September 2017 was the time when Justine Charity of sports and pop culture website The Ringer stated, "PewDiePie isn't a comedian in any conventional sense," but described his "hosting style [as] loopy and irreverent in the extreme: He's a little bit stand-up, a little bit shock jock, a little bit 4chan bottom-feeder."

Reasons Behind the Popularity of His Channel

Pewdiepie is a popular figure on YouTube from quite a time now, and certain factors have contributed to his popularity and success for some reason.

He is from Sweden but, luckily he knows English as well. Although being Swedish doesn’t serve as a barrier, it provides him with an accent that the audiences seem to enjoy a lot.

Accents are an important factor in your success as a YouTuber as they help people to easily relate to you outside a particular state, city or a nation. Pewdiepie’s accent is the coolest factor that attracts him more audiences. 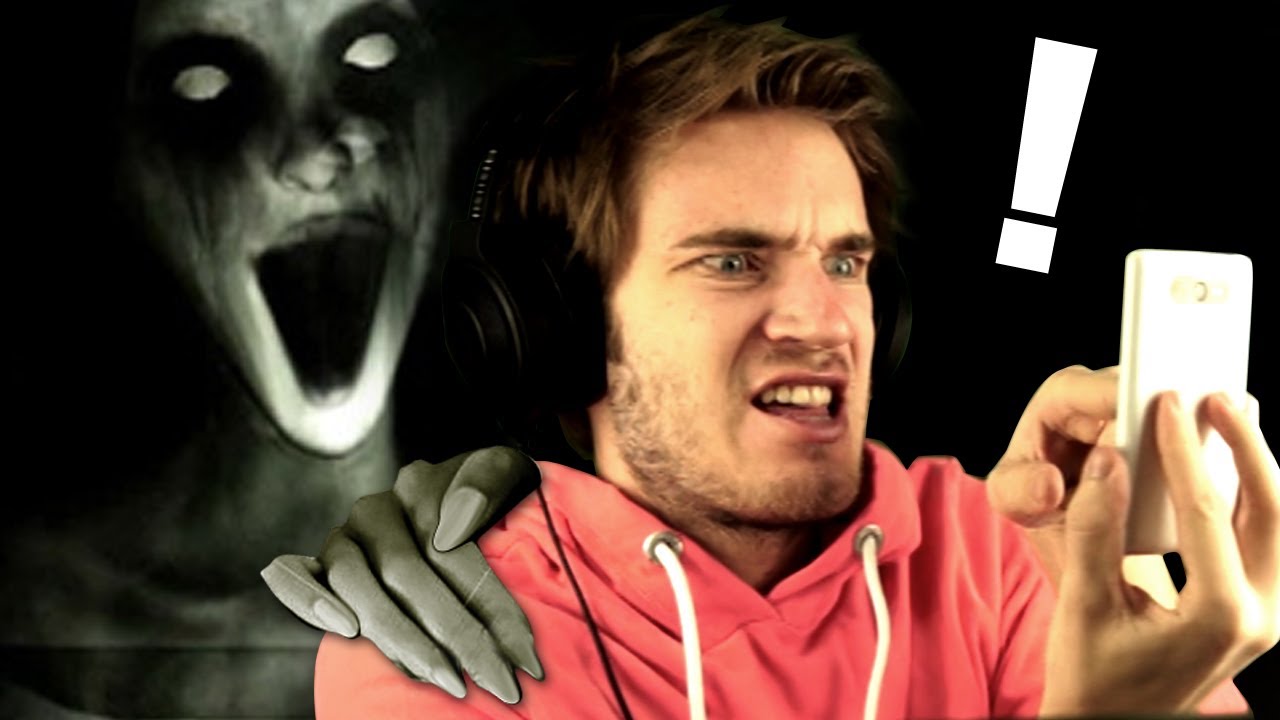 He capitalized on his popular package of gaming with entertainment “Let’s Play” and took the market by storm with his unique content.

Although he was not the first person to play games and being recorded, he made it entertaining. His reactions on the part of video games such as the horror genre attracted many audiences to him as it was unique and entertaining in a way.

The time was right when “Let’s Play” began to explode with video game commentaries over various genres, and that was the time when he added the right amount of humor to it which was truly genuine. The completely unfiltered emotions and the humor got the people talking and made them notice the freshness of the idea.

YouTube’s video gaming community is also one of the important factors behind the success of Pewdiepie’s gaming channel. It has been observed that gaming is the second most popular form of content after music on YouTube. There has been a rise in the video gaming communities over the YouTube that has contributed to the popularity of his channel.

Video games got a boost from virtual reality. Moreover, Felix played games that were already popular on YouTube like “The Last Of Us” and “Uncharted 4” that people can’t afford to buy and play normally.

Being a smart content creator, he has excelled at the quality of coming up with new and fresh content on a consistent basis. This way he tries his level best to stay relevant to the audiences with his content. Pewdiepie has been consistent in uploading videos twice a day from six years, while other YouTubers give up easily after a few months. It is because they are doing it for money but he is full on with the pursuit of entertaining people, and that is what motivates him.

Apart from this, he is always up with some or the other thing fresh and unique in his content. Although he has created a niche in the gaming category, he keeps posting a variety of content such as podcasts, reading comments, playing Indie games, playing fan-made games, filming collaboration videos with his girlfriend/YouTubers, vlogs, and much more.

He always tries to keep his content short and fresh while trying to mix n match with other forms of entertainment. This way he keeps a good hold over the audiences from different demographics while taking note of their multiple interests.

Thumbnails are important when it comes to drawing viewers to your videos. In this segment, Pewdiepie has come up with interesting thumbnails and are extremely fun to watch. They form a bait for the people due to their creativity and draw new viewers every minute. 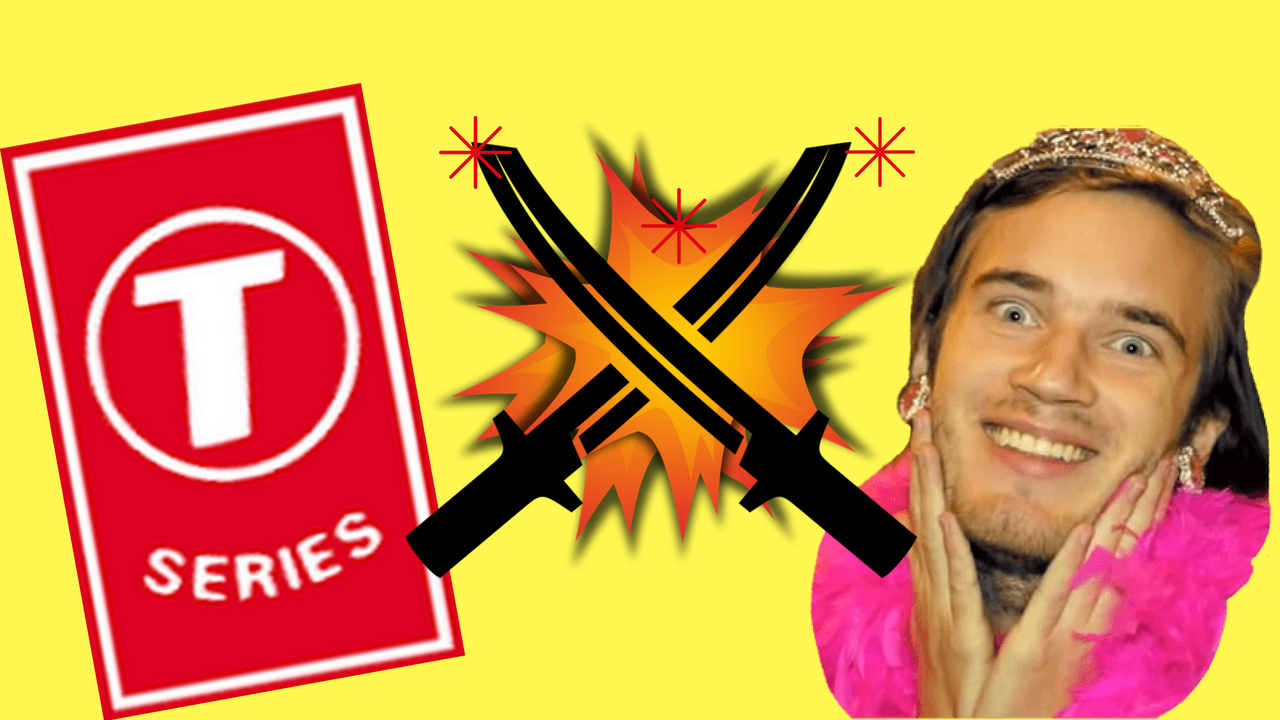 T-Series gave a tough fight to Pewdiepie, and the frustration can be seen in the video clip that he uploaded some time back.

T-Series is an Indian music and film production company that comes with Bollywood soundtracks on a daily basis. Gulshan Kumar founded it in 1983 which released the soundtrack of a Bollywood movie Aashiqui in 1990. The music was composed by Nadeem-Shravan, and it went on to sell around 20 million units of the same.

T-Series achieved another milestone by surpassing Pewdiepie in the race of achieving the title of the most subscribed YouTube channel. The rising popularity of T-Series is indicative of this as it had taken Pewdiepie down earlier this year in February by becoming the most viewed YouTube channel.

According to SocialBlade, a company that tracks statistics of social media platforms including YouTube, Pewdiepie gains over 30,000 subscribers per day which is less than 1,45,000 subscribers that T-Series gains daily on an average.

The obvious reason that seems is the consistency and the mechanism that is contributing to the success of T-Series online. Pewdiepie is only one guy who is uploading video content with a lot of freshness in it. But T-Series has an entire army of employees and Bollywood stars who rely on it. T-Series comes with highly produced music videos daily in contrast to Pewdiepie’s vlogs and video game streaming per day.

Pewdiepie also uploaded a video titled “THIS CHANNEL WILL OVERTAKE PEWDIEPIE” regarding the popularity it is losing on a daily basis as T-Series also holds many other YouTube records. It is evident from the above facts that the reign of Pewdiepie is soon going to end.

Felix “Pewdiepie” Kjellberg has tasted the success online from 5 years consistently. It was great to see him coming up with genuine video content that was unfiltered and interesting to watch. Everything comes to a decline with time, and it is a topic of interest for many as they are lining up to see Pewdiepie being dethroned by T-Series.

What do you think about the whole episode of Pewdiepie v/s T-Series battle? Let us know your thoughts on this.

Who Are Indigo People And What Traits Make Them Unique?