Failed in Love, Dressed Like Krishna, This Man Delivers the Message of Love

What you will do if you broke up with the person whom you loved the most? Usually, the person got depressed and feel lonely or e... 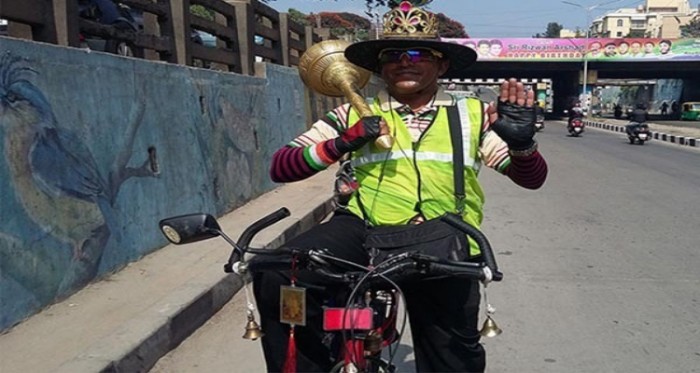 What you will do if you broke up with the person whom you loved the most? Usually, the person got depressed and feel lonely or even tries to commit suicide as if thinks that he is all alone now. Some took revenge too, nothing can be listed as a one sided lover could do anything after a breakup.

But here’s gone something over the internet that has overwhelmed me with emotions. Satish Kumar, an IISC executive is a man who got rejected by a girl, he loved the most. Unlike other lovers he didn't took revenge or challenged her but he decided to spread this love message to the whole world. He knows how a person feels when they lost their love or if they got dumped. He decided to dressed like a Lord Krishna and spread the word of love on a bicycle. In Bengaluru, he cycles all the way from Indira nagar in the get up of Lord Krishna along with a Gada. Recently in an interview with a leading daily he revealed his story.

“I was madly in love with a girl, I had dreamed being together but she just rejected me and walked out of my life. I was hurt, I could have taken extreme step but I decide to live and took up cycling."

Why you Carry Gada?

He said, once he fell on the road and was just inches away from a bus tyre. He thinks that just before that incident he visited Hanuman Temple, and the lord had saved his life. So he suddenly purchased a gada and then learned cycle. He runs cycle without using hands, if use hand only if he has to stop somewhere or he want to reduce the speed.

You can see him near cantonment railway station area in Bengaluru, he is always noticed teaching love of parents, country and an environment to people. Cycling brought him closer to the divine, hence his cycle is decorated with trishula and different weapons used by the God.

A Truly Inspirational Story of the 2 Kids Born Without Nose