17 Facts About Human Attraction That Would Leave You Amazed

The reason why a person gets attracted to a particular person can sometimes seem obvious but not always! Know some fascinating facts about human attraction here. 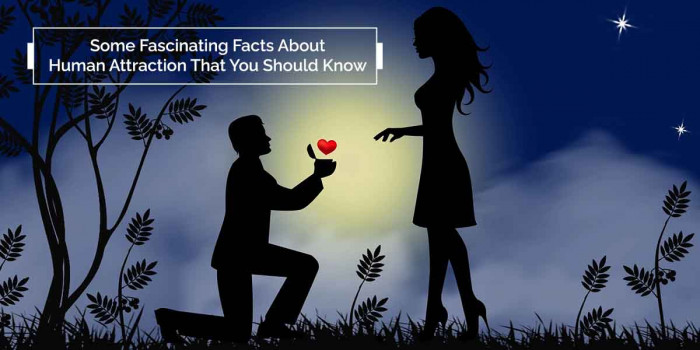 It is a well-known fact that good-looking people get several advantages in everyday life and gain more attention in society. Usually, when two people of the same level compete for a job, the one who looks more attractive than the other gets the chance.

The attraction is a quality of feature that gets someone interested in someone. It could be something that could get you a date or a corporate job. It could be some physical trait or your perfume or some other lesser-known reason that you might not know.

So let’s check out some of the facts about human attraction here.

Are Looks That Important?

If you take the time to survey enough, you will find that good looks matter in your life. Our appearance plays an important role when it comes to human attraction or relationships. There are several industries like showbiz, modeling, and fashion, where beauty is the only criterion to achieve any advancement.

Here are some interesting facts about human attraction. 1. As per some online dating sites, it is found that women are most attracted to a potential partner’s height; whereas, men are more attracted to the woman's potential weight.

2. Women tend to be more attracted to men when they become exposed to an often-odorless testosterone derivative in male sweat named ‘androstadienone.’ This chemical can make a woman subtly more attentive, aroused, and even happier.

3. No matter what the gender of the person is, the one making the first move is less picky than the person they target.

4. The faces with prominent limbal rings are considered rather attractive. A dark, well-defined ring symbolizes youth and health- the qualities that people look for in their partners. It is thickest during the early 20s and eventually fades or becomes non-existent due to age and medical problems.

5. A normal weight hungry man or one who feels threatened or uncertain would prefer or get attracted to a woman with robust female figures, reminding him of strength, control, nurture, and independence.

7. The pitch of a woman’s voice tends to become higher but not shrill when she flirts. And men prefer these high pitched dulcet tones rather than deeper ones. The women achieve the highest chords around ovulation.

8. If a woman wears crimson, rose, scarlet, or other reddish hues, then she is more likely to be asked out and also the higher chances of the date splurging on her. As red color is linked to fertility, the women in red are perceived as more sexually receptive. In the case of men, the red color is associated with high status. So wearing this color could trigger a virtuous cycle: it encourages people to act sexier as we expect others to think women to be hotter and men to be more powerful and confident.

9. The fragrances can play a role in amplifying and advertising the unique genetic makeup to potential dates. The people sharing the same variants of the immune system (MHC) genes prefer the same scents. It indicates that certain scents work best with particular body chemistries are intuitively aware of their preferred fragrance.

10. Interestingly, consuming garlic can make a person have an attractive smell. That’s because garlic contains antioxidants and enhances metabolic functioning, and it may improve body odor. Also, the anti-bacterial properties of garlic can help in killing the foul-smelling armpit microorganisms.

11. The symmetry in facial features is considered highly attractive. If you would notice, most of the celebrities have nearly perfectly symmetrical faces and are thus regarded as very attractive.

Also, people who find a mirror image of or those resembling themselves in the other person tend to get more attracted toward him or her because they find him/her more trustworthy.

12. Many high-paying jobs and high-level management positions are held by attractive people. The hiring managers usually prefer an attractive employee for giving promotions.

13. Genes can be behind an individual’s physical attraction. Attractiveness is the symbol of health and fertility.

14. The Oedipus syndrome suggests that people are more attracted to those resembling their parents, especially when age is considered. The older their parents are at the birth time, the more likely would they be attracted to older faces.

15. The men with beards are perceived as the more attractive, responsible, and potentially better parents.

16. Research suggests that people who often find others more attractive when they experience an adrenaline rush.

So these are some amazing facts about human attraction. Have you read or heard of any other attraction facts? Please let us know in the comment section below.

Heights of Stupidity Reached! 15 Strange GIF’s With That Will Make You Go LOL!