Buddhism and high stake poker seem to be unlikely companions but, a Canadian poker player Scott Wellenbach proved it wrong by donating $6,00,000 win to charity and is hailed as the “People’s Hero.” Know how. 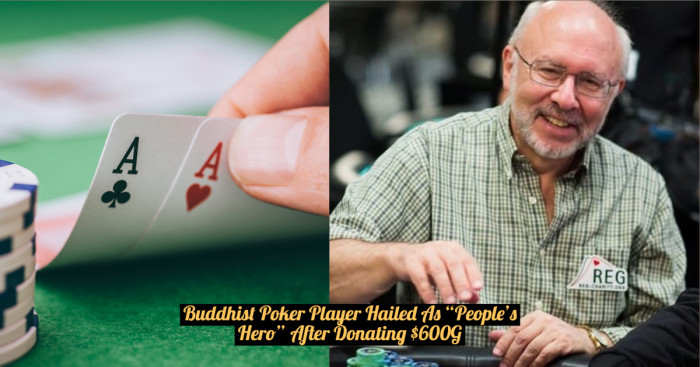 Buddhism and high stake poker seem to be unlikely companions but, the case with Scott Wellenbach is different for him; it goes hand in hand.

The Canadian poker player Scott Wellenbach who practiced Buddhism won over $6,00,000 in a tournament held in The Bahamas. He finished at the third place and gave it all in charity rather than holding on to it or risk gambling them where he took away $671,240(£518,868). His kind move of giving away all his winning earned him accolades and turned out to be “The People’s Hero.”

"Being a practitioner of Buddhism, we sit around and meditate a lot - and that's free.”

Scott Wellenbach is from Halifax, Nova Scotia and works as a translator of Tibetan and Sanskrit Buddhist texts for a religious non-profit organization where he also honed his poker skills when he was not doing that. Most of us are taken away by greed when it comes to a whopping figure like $6,00,000 but, here greed is not the point of this unique story.

He had an urge to find something and went to Buddhism when he was a young man. He wanted to know the way to cope with the dissatisfactions of life, and then he found solace in Buddhism. Now he is 67 and meditates for an hour every day but, resisted exceeding the limit when he was busy in the poker tournament. (12.1)

Speaking about the practice, he said,

"My personal discipline waxes and wanes."

"Down here at the poker tournament, my discipline was excellent every morning! I was so desperate for a little glimpse of sanity in the midst of all this."

How can you not love this guy? Scott Wellenbach explains why he will be giving all of his winnings away. Watch that and then check our live #PCA updates as Wellenbach continues to compete for $1.5 million.

He learned to play poker when he was a young child and didn’t play until 2010; it’s when he won a trip to Las Vegas. After winning an online tournament, he went to the PokerStars Caribbean Adventure tournament in the Bahamas.

Before winning such a big figure like $600,000, his biggest win was $72,176. He finished at the third place at the tournament in The Bahamas to which he called “bittersweet.”

"I have a lot to learn about how to play poker at this level, with these guys who are so, so good," he said.

When asked about reconciling his Buddhist practice where one emphasizes on making peace with the impermanence of life with that of the adrenaline rush of the straight flush, he admitted. “With great difficulty.”

But, he had a good hand at balancing the peaceful Buddhist life and the adrenaline rush of the high stake poker game due to the meditation that he used to practice daily for an hour.

He showed his concern about the ethics of the poker game that involves high stake and has left many in the financial ruin. He said,

"I suppose I rationalize it by giving my winnings to charity."

Along with giving donations to several Buddhist charities, his beneficiaries also included Oxfam and Doctors Without Borders.

“A significant amount of your money is won from people who are too addicted, too drunk, too unstudied or too masochistic to play well – and we all have those features within us.
In any case, I feel there’s a tension about winning money under those circumstances and I guess I rationalize my addiction by giving away the winnings, saying, ‘Well, at least I’m doing good things with it.”

He also considers poker as esoteric where the human mind has to face the contradiction of Actuality. He said,

"Poker gives you a tremendous opportunity to work with the heavens and hells of your mind."

"You're winning and losing every minute-and-a-half, and so some sense of how your hopes and fears go up and down with the passing circumstance of the world is brought to fore at the poker table."

Poker players are not only concerned with winning big and amassing their wealth have also made donations to various charitable organizations. The story of Scott Wellenbach is inspiring in many ways that give the stark contrast to the harsh realities of the world where people are stuck in greed. This way the Buddhist poker player has rationalized the idea of playing a game and helping those in need.