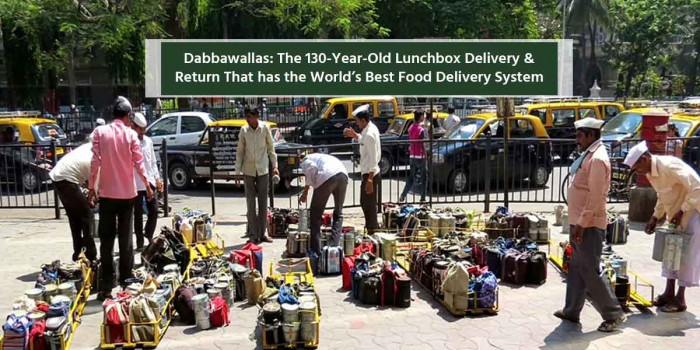 Every person prefers to eat hot and home-cooked food. Dabbawalas (alternatively spelled as Dabbawallas and Dabbawallahs), also called tiffin wallahs, deliver 175,000-200,000 lunch boxes every day in the Indian city of Mumbai by 4,500-5,000 Dabbawalas. They predominantly use bicycles, railway local trains, and carts to deliver lunch boxes in the late morning (returned empty in the afternoon).

What’s interesting is that it is estimated by the Mumbai Tiffinmen's Association President, Ragunath Medge, that the Dabbawalas make less than one mistake in six million deliveries. Currently, Ritesh Shantaram Andre is the new and youngest Spokesperson of Mumbai Dabbawala.

The Dabbawala means “one who carries a box” and “tiffin box delivery person” here, in which Dabba means a cylindrical tin or aluminum container box & wala is the agentive suffix that denotes a doer or holder of the preceding word.

The Story of How Dabbawalas Started

During the late 1800s, more and more migrants were migrating to Bombay from various parts of the nation, when fast food and canteens were not so popular and widespread. They left early in the morning and went hungry for lunch. They were from diverse communities having distinct tastes, which could be found in home-cooked food.

In 1890, Mahadeo Havaji Bachche began a lunch delivery service in Bombay with about 100 men. It became a success, and it continued to flourish for years to come. Then in 1930, Bacchche tried to create a union of the dabbawalas. Later, in 1956, a charitable trust was registered under the name of Nutan Mumbai Tiffin Box Suppliers Trust. In 1968, the commercial arm of this trust was registered as Nutan Mumbai Tiffin Box Supplier's Association (NMTBSA).

A Systematic Color-Coding System to Prevent Any Delivery Hassles

The entire Dabbawalas management avoids any mistake. Even the Dabbawalas don’t use any mobiles or modern technology. It’s hard to manage the entire thing without technology, but the irony is that they are doing it perfectly.

A specially designed color-coding system helps in the identification of the recipient and destination. As several carriers are of limited literacy, the lunchboxes are marked in various distinguishing ways such as abbreviations for collection points, color code for starting station, the number for the destination station, and markings to handle dabbawala at destination, building & floor. For instance, they use the alphabet for area determination like A symbolizes Andheri, B symbolizes Bandra, and so on.

A dabbawala rides on a bicycle to collect dabbas from a worker’s home or dabba-makers. He then takes them to a sorting place, where he & other dabbawalas organize the lunch boxes into groups. These grouped boxes are then placed in train coaches along with marks for figuring out the box’s destination. The markings constitute the railway station for boxes’ unloading and the destination building delivery address. The modern infrastructure advancements like Navi Mumbai Metro are not used in the supply chain as cabins do not have the capacity for hundreds of tiffins.

At every station, the boxes are returned to a local dabbawala who delivered them. These empty boxes are collected after lunch or the next day and sent back to their respective homes. The dabbawalas have also enabled delivery requests through SMS.

They collect the home-cooked tiffins from houses and deliver them in time for lunch to your loved ones at the office with minimum charges. In a day, the Dabbawalas handles 500 lunch boxes.

How Much do Dabbawalas Earn?

No matter the role of the dabbawala makes nearly Rs. 8000 monthly. They are self-employed, and a union initiation fee is Rs. 30,000, of which Rs. 5000 is guaranteed & a job for life is ensured. A monthly fee of Rs. 150 offers for delivery six days a week. Most of them are related to each other and are from the Varkari sect and hail from a small village near Pune in Maharashtra.

Every dabbawala needs to contribute a minimum capital in kind. This contribution is in the form of two bicycles, a wooden crate for tiffins, white cotton kurta pajamas, and a white Gandhi cap.

A division of the earnings of each unit occurs monthly. They are fined for the consumption of alcohol, tobacco, not wearing a uniform & absenteeism.

It was in 1996 when they first gained widespread attention for their extraordinary logistics. A documentary entitled ‘Dabbawalas, Mumbai’s Unique Lunch Service’ captured their work.

In the year 2001, Pawan G. Agrawal achieved his Ph.D. with research in "A Study & Logistics & Supply Chain Management of Dabbawala in Mumbai," in which he detailed the results on the efficiency of Dabbawallas in different fora. Also, an article titled ‘Fastest Food: It’s Big Mac vs. Bombay’s Dabbawalas’ was published by the Christian Science Monitor, and a full-length documentary by Carnegie Mellon University on them was filmed in 2001.

The Forbes magazine in 2001 awarded the Six Sigma certification for 99.99% accuracy, meaning only one mistake occurred per 16 million transactions. Amazingly, they pulled off the operations without any technology input.

Then in 2005, the IIM (Indian Institute of Management) Ahmedabad carried out a case study on the Mumbai Dabbawallas and highlighted the management perspective of logistics. Also, the business magnate Richard Branson learned how they work by spending a whole day with them.

Back in 2010, the Harvard Business School added the case study titled “The Dabbawala System: On-Time Delivery, Every Time” to their compendium for its high-end service with a low-cost and easy operating system.

In 2014, Uma S. Krishnan completed her Ph.D. and published her research paper titled "A Cross-Cultural Study of the Literacy Practices of The Dabbawalas: Towards a New Understanding of Non-mainstream Literacy and its Impact on Successful Business Practices."

According to a 2007 New York Times report, the 130-year-old dabbawala industry is growing at 5-10% annually. Besides, the 2013 Bollywood movie titled Lunchbox was based on the dabbawala service. Interestingly, two NMTBSA office bearers were invited to attend the wedding of the Prince of Wales and Camilla Parker Bowles in 2005.

For five days each March, Tiffin distribution is suspended as the tiffin-wallahs go home for the annual village festival. Back in 2011, dabbawalas went on strike for the first time in 120 years to attend a rally in Azad Maidan to support Anna Hazare’s campaign against corruption. The same year on 21 March, Prakash Baly Bachche created a Guinness World record by carrying three dabbawala tiffin crates on his head at one time.