Flying cars would be launched in future years. But this man from a village in Bihar turned his Nano car into a helicopter after he couldn’t accomplish his dream of becoming a pilot. Find out how. 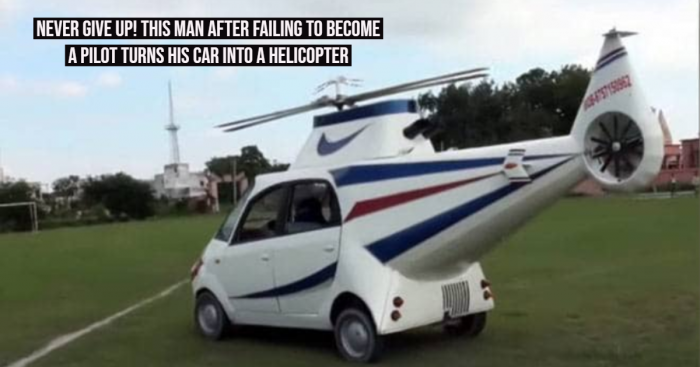 How many times have you thought of quitting on a dream that you couldn’t accomplish even after trying thousands of times? May be hundreds of times. But this man from Chhapra (a village) in Bihar turned his Nano car into a helicopter after he failed to become a pilot. He converted his dream into reality by working hard for seven months and spending nearly Rs 700,000.

Although this unique Nano car turned helicopter couldn’t fly, it gives the feel of chopper ride. He gave his car a helicopter look by adding a tail boom, rotor blade, and a rotor mast. What’s amazing is, he even painted his car to give it a brand new look.

Mithilesh Prasad Couldn’t Become a Pilot Due to Financial Constraints 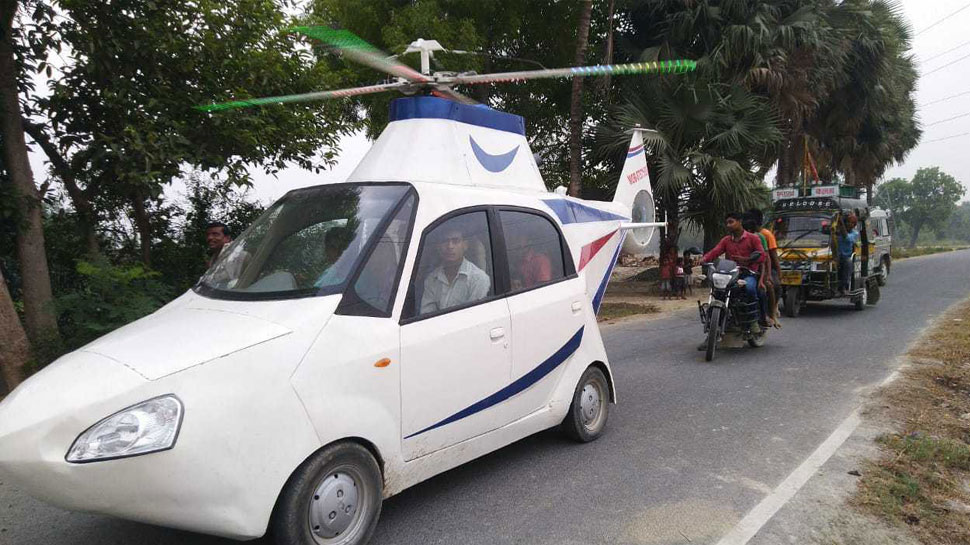 Milthilesh and his brother are employed as pipefitters. They together worked on this project and created a replica of a helicopter that moves on the road. However, the fabrication and fittings have made the Nano bigger than its original form.

After completing 12th, he moved to Gujarat and started working as a pipefitter. The car has a control panel similar to that of a helicopter, which controls the functioning of other parts. They arranged the scraps from here and there, applied their ideas and local engineering and gave the nano a final touch. The nano-heli also has lightings that look attractive during night. They have also used LED strips in front of side panels and under the car body.

Watch How he Transformed his Car into a Helicopter!

Right from childhood, he is an expert in repairing electronic items. He further added,

“I would often dismantle the electronic items and then re-assembled them. I always loved to make new things out of scraps.”

“I wanted to become a pilot but since my family was too poor to pursue my higher study dream, I decided to fulfil my dream partly by at least riding a helicopter car. Although my ‘chopper’ can’t fly yet it gives a feel of a real chopper.”

Whenever he takes his car out for a drive in his village, it becomes an entertaining and an amusing sight for the kids and locals.

A Few Incidents Like This from Past That Made Headlines This is not the first time a man turned a car into a helicopter. Earlier, Zhu YueYue, a garlic farmer from China, constructed an airplane because he couldn’t afford it.

He made a copy of the Airbus 320 permanently taxied on a short piece of tarmac surrounded by wheat fields. He invested his savings of over 2.6 million yuan, i.e., USD 374,000 into the project. He worked with a few laborers who were also airplane enthusiasts.

He didn’t finish his middle school and started cultivating garlic before he joined a factory in the city of Kaiyuan.

I can’t even imagine now how much airplane costs?

Another incident like this took place in Pakistan. A popcorn seller Mohammad Fayaz attempted an unauthorized take-off of his homemade airplane when he failed to become an Air Force pilot.

He was stopped by the police for performing this take-off, and his homemade airplane was seized. He took a bank loan, used his savings, sold a piece of land, and spent 90,000 to design the plane.

"Whenever I looked up to watch planes overhead, I longed to fly one myself. And then I thought I should use the creativity that God has bestowed on me to build my own plane and fly it."

This man is a HERO. Any one trying to justify his arrest & remand on my time line will not get any kind words from me. Yes CAA has regulations but this is an extrabordinary story & this man needs to be groomed & encouraged & helped to comply with law & asked to innovate more. pic.twitter.com/reJxUXOQsy

They have designed an airplane or a helicopter, but this Chinese engineer Chen Yan has designed a car that beats other stylish cars.

The world is full of talented people. Some ordinary people are lucky who make headlines and become famous; others are happy working hard and fulfilling their dreams.

Have you ever thought of transforming your vehicle into something like this? I never have. I am impressed by this transformation and would love to see something unique like this in the future? I am not only impressed by his creative skills plus with his attitude that shows to never give up on your dreams.

Do you know someone like him, or have seen this type of transformation ever? If so, share about that project below. We would love to share these rare pieces.