In the Wiccan religion, both male and female energies are worshipped in different ways. The Wiccan Goddesses are further divided into triple goddess – maiden, mother, and core. 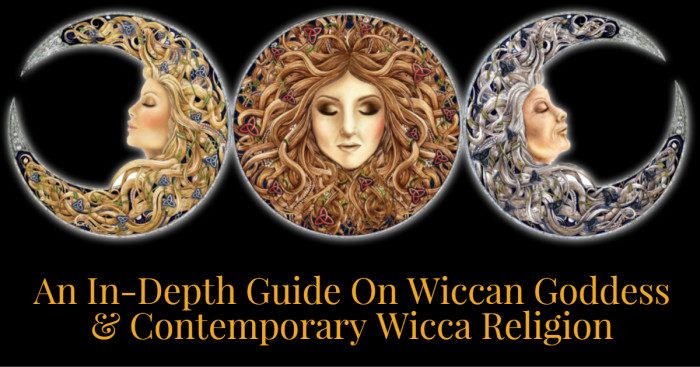 Wicca or Pagan Witchcraft is a contemporary Pagan new religious movement. This religious belief was developed in England in the early 20th century and was introduced to the public by Gerald Gardner (a British civil servant) in 1954. Initially, the religion spread in England and then attracted followers in Europe and the United States.

The Origin of Wicca 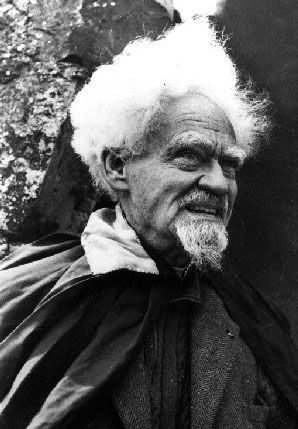 The religion has no central authority. The origin of Wiccan was first outlined by Gardner and Doreen Valiente in the 1940’s and 1950’s. Gardner spent most of his time in Asia and became familiar with different beliefs and magical practices. He also read Western esoteric literature along with the writings of occultist Aleister Crowley. Gardener then involved in the British occult community and initiated a new movement based on magic and worship of goddess and associated deities. 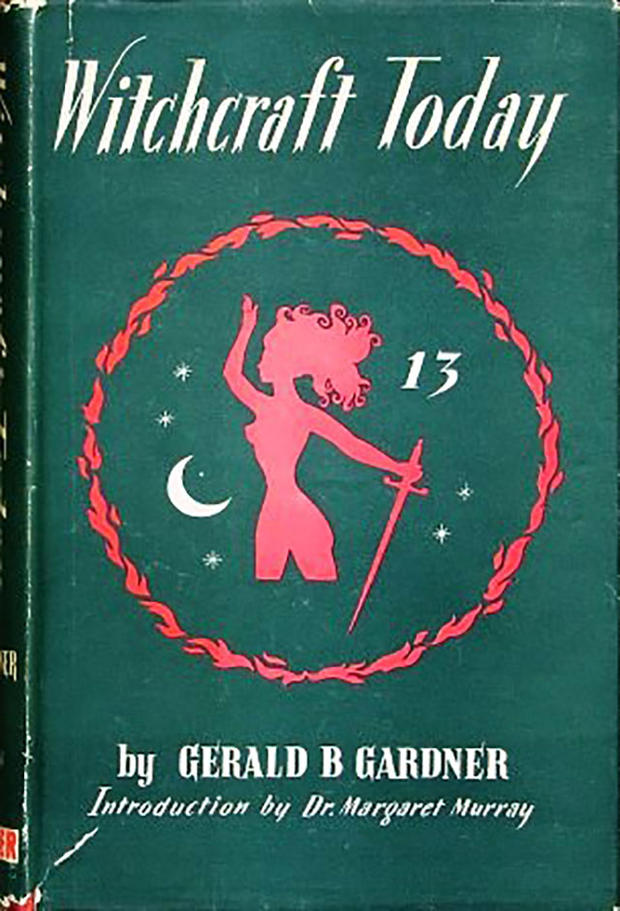 Following the 1951 repeal of archaic witchcraft laws, he published Witchcraft Today (1954) and founded his first coven of followers. He then developed modern witchcraft which is today popularly known as Wicca. (18.1) 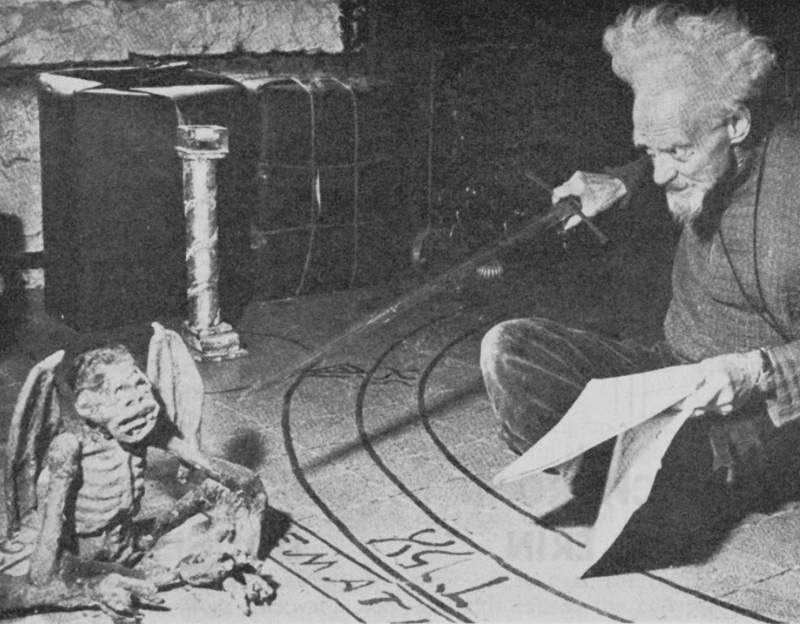 Wiccan views of divinity are generally theistic (belief in the existence of deities). They revolve around a Horned God and a Goddess. In the writings of Doreen and Gardner, the focus is on the theme of gender polarity. Both God and Goddess are considered equal and opposite divine cosmic forces.

Gardener writes that these are the gods of the witches, just like the Egyptians have their gods Osiris and Isis. The goddesses are seen as having a triple aspect of the crone, mother, and maiden. The lady and lord are seen as cosmic beings and the source of unlimited power.

Even today, there is some debate within the religion regarding the nature of the Wiccan goddesses. Some people see the goddess as the divine force that brings other lady and lords into existence. Many other see the goddesses as equal and independent from the gods. (18.2)

One of the most frequently used symbols defining the Wiccan Goddess is the triple moon combining the images of the full and waning moon. These phases are referred to as the maiden, mother, and crone. The triple moon also strengthens and supports psychic abilities.

In the first maiden phase, the goddess is a young woman full of new ideas and enthusiasm. This phase is associated with the phase of the lunar cycle.

In the mother phase, the woman is grown up and in a happy phase. This phase is linked with the full moon, making this the perfect time for success, fertility, and fulfillment. She is fulfilled sexually and emotionally.

In the crone phase, she is near to death. It is associated with the chill of winter. The dying of earth makes it the time for patience, endings, and guidance. (18.3)

Another popular symbol is the spiral that reflects the cyclical nature of the feminine. These symbols are usually seen incorporated into jewelry and other ritualistic objects.

Mother Goddess is believed to be the creator of the Universe and the Earth. She is the cycle of life, birth, and death. She is not only referred to as the creator, but it is also said that she has put some part of herself in her creations.

For the Greeks, the mother Goddess was Demeter, for the Norse, it was Freya, and for the Egyptians, it was Isis. Both Gods and Goddesses are honored at the altar every Wiccan ritual.

The Elements of the Wiccan World 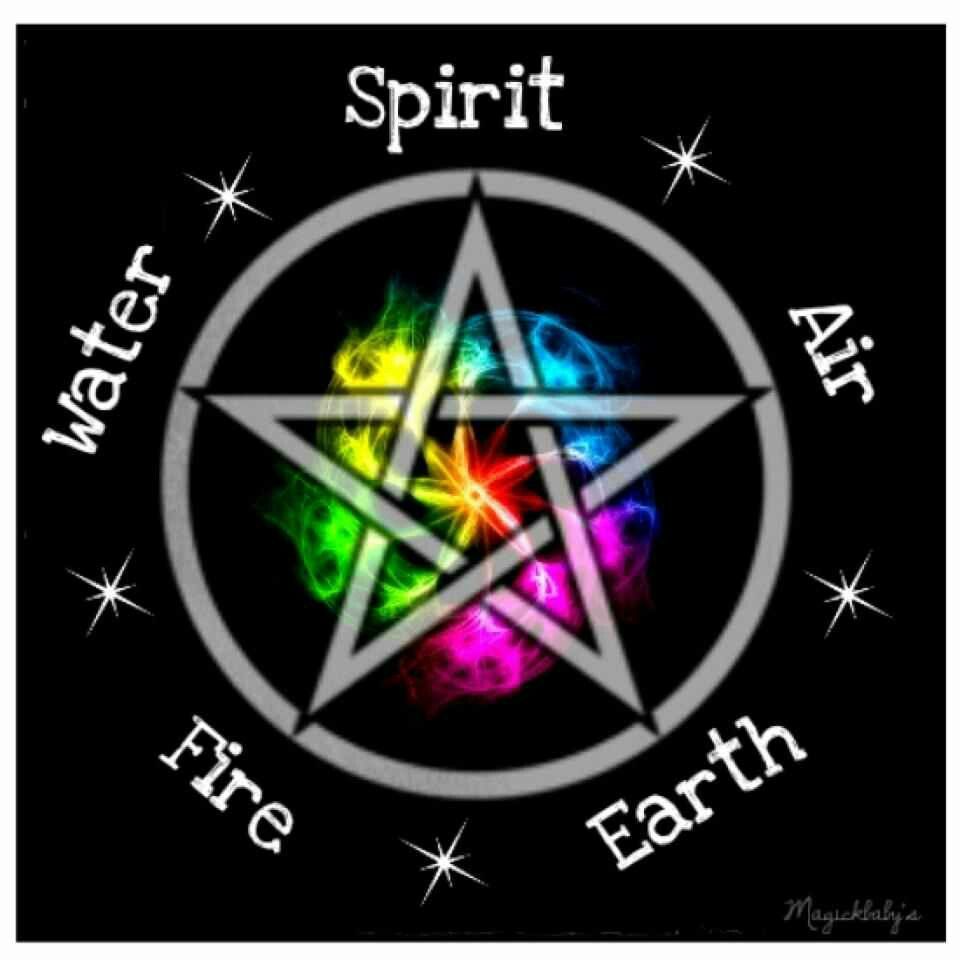 Though the elements of the religion are not considered deities, they are a prominent feature in the Wiccan world. Every form is seen to exhibit one of the elements – Air, Earth, Water or Fire (sometimes in combination). There is no common phenomenon associated with the nature of these elements. The ancient Greek theories state that the elements that relate to matter are earth, those relating to energy are fire, and those associated with the phase of matter are a combination of fire and earth, and so on. 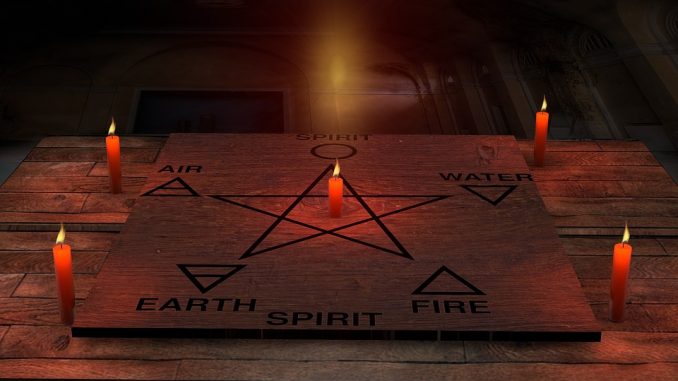 Modern conception relates the four elements to science: liquid to water, solid to earth, plasma to fire and liquid to water. There are some Wiccans who believe that five points of the pentagram symbolize other things along with four elements presiding at the top. The symbol pentagram is associated with Wicca in modern times. It is shown within a circle with a single point upward.

If you are new to Wicca religion and want to know more about Wiccan Goddesses, refer to the given below list of common Wiccan goddesses that are still worshipped to identify which goddess connects with your goal. 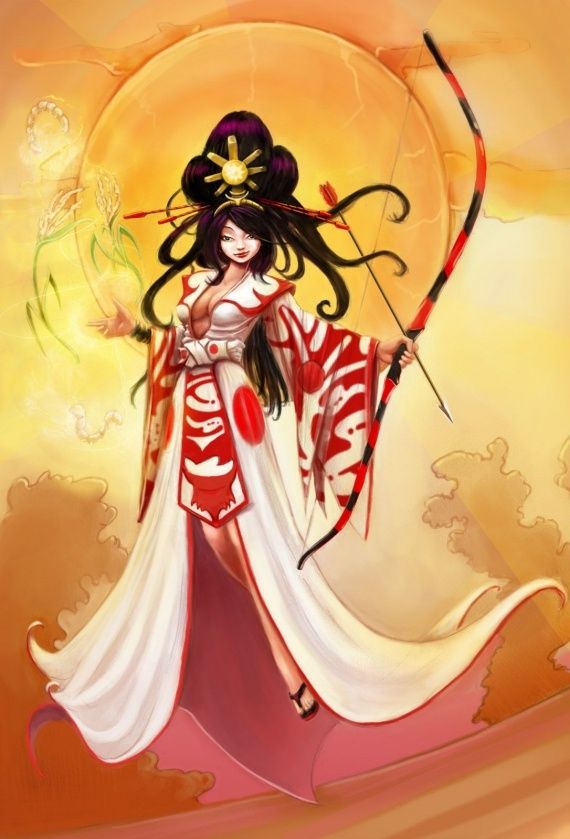 Amaterasu is the sun goddess and an important deity of the Shinto religion. It is also believed that she is the ruler of the Takama no Hara which is the realm of spirits.

According to the religion, she was the daughter of Izanami and Izanagi, two deities who are responsible for the existence of islands of Japan. She was born when her father escaped from the underworld, after his failed attempt to rescue his wife.

In the river Woto, her father performed a purification ritual to clean himself. As the god was washing his eye, she was born. 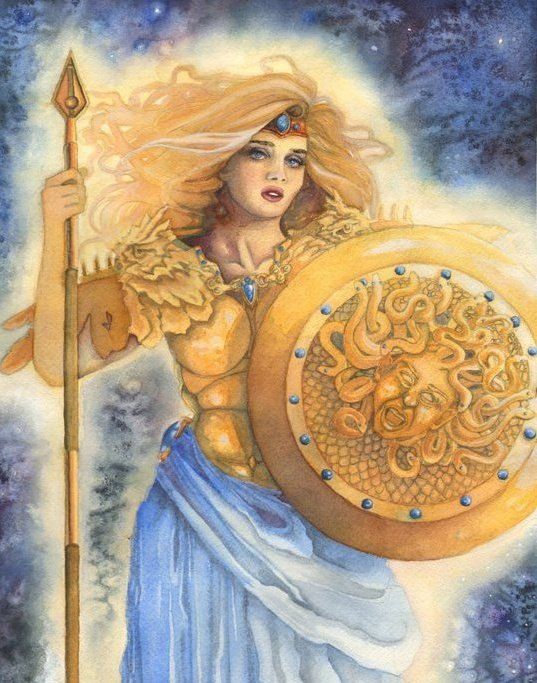 Athena was the goddess of wisdom. She is the patron goddess of the city of Athens. She was celebrated every spring with Plynteria (a festival during which altars and statues were cleaned).

Athena is portrayed with Nike, his companion and the goddess of victory. There are some people in Greece who worship Athena even today and pay respect to her at the Acropolis. 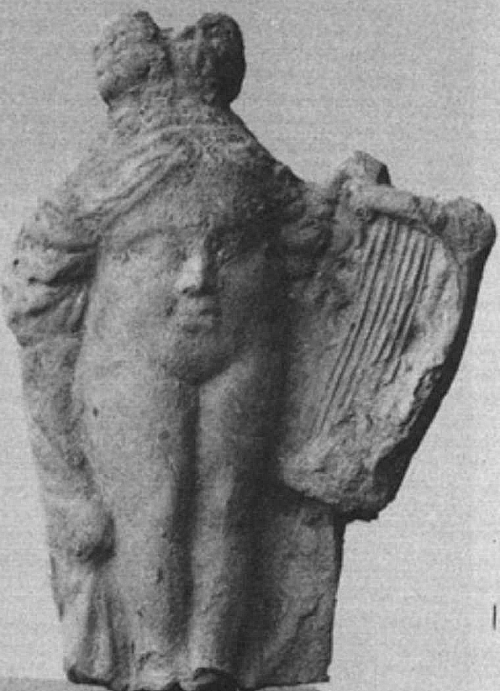 Baubo is the goddess of laughter. She is fun-loving, sexually liberated and plays an influential role in the mysteries of ancient Greece. She is an eminent figure today and celebrated as a positive force of female and the power of laughter.

Most of the tales surrounding Baubo arise from connections between her name and names of the goddesses. She is often referred to as the goddess Iambe (daughter of Echo and Pan) as described in the legends of Homer. 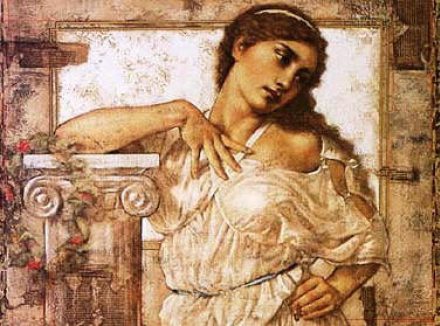 Flora is the Roman goddess of plants, especially those that yield fruits. She has been depicted as a beautiful woman wearing spring clothing and holding flowers.

The goddess Flora teaches us to enjoy the moment and promise of the future. She was a minor figure in Roman mythology. Her connection with the spring gave her importance at the coming of springtime. (18.4) 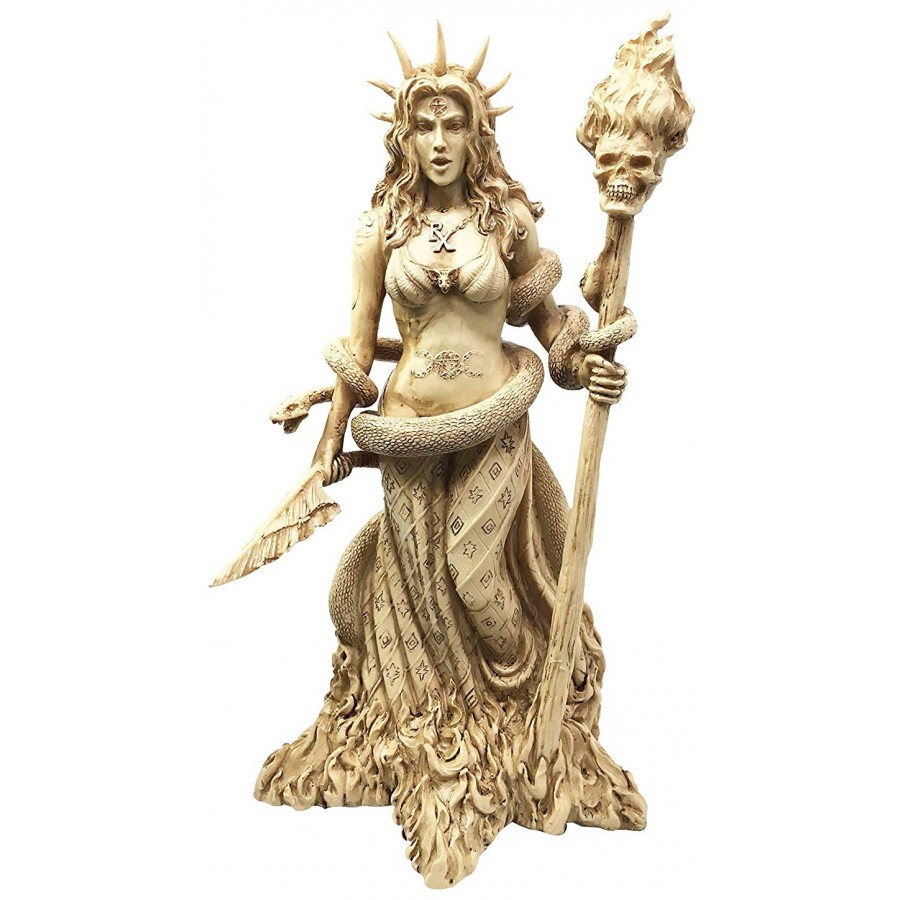 Hecate Wiccan Goddess is the goddess of protection in ancient Greek religion. She was associated with light, witchcraft, ghosts, crossroads, herbs and poisonous plants and sorcery.

Hecate is referred to as the main deity worshipped in households as a protective goddess and the one who shower her blessings on the family. She is strong and protects you from harmful spirits. Her place of origin is still not known, but it is thought that she had many followers in Thrace. 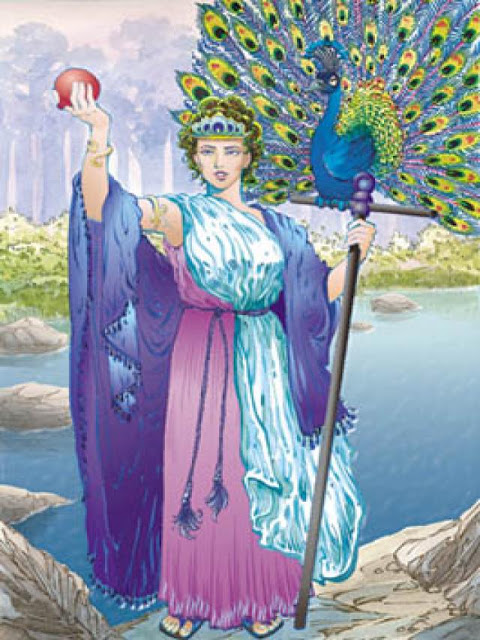 Hera, the wife of the famous Greek god Zeus, is the leading lady of the Olympians. She is associated with Roman Goddess Juno. Hera is commonly worshipped as a Goddess of fertility. She is described as a gorgeous woman who shines like the sun. Hera protects the interest of honorable women and gives strict punishment to those who dishonor women. Although she is described as vengeful, she is the protector in the ancient honor society of Greeks. 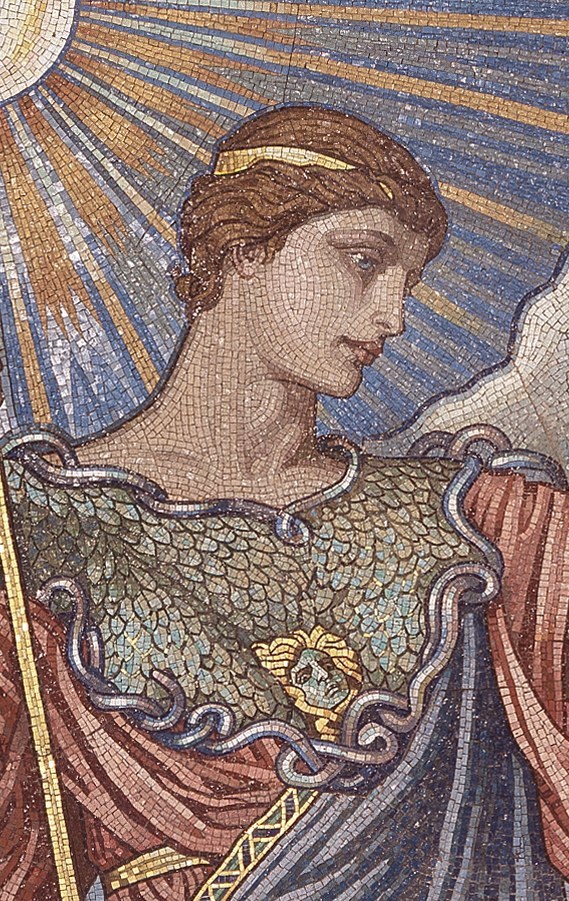 Minerva was the famous Roman Wiccan Goddess of strategic warfare and the sponsor of strategy and arts. She was the daughter of Jupiter and Metis. Minerva was the Virgin goddess of medicine, weaving, wisdom, and commerce. She is often represented with her sacred creature which is usually named as ‘Owl of Minerva’.

Minerva was worshipped in Rome and most prominently as a part of the Capitoline Triad. Besides this, she is also featured on the coin of different Roman Emperors. Minerva is represented on the coin holding an owl and a spear. (18.5) 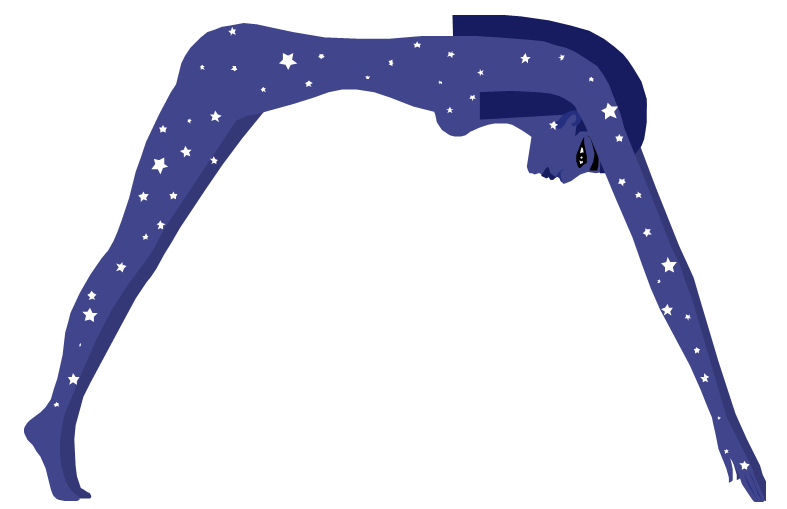 The Egyptian Goddess Nut or Nwt or Nuit is the goddess of the sky in the religion. She represents the sky and the universe. She is depicted as a naked woman covered in stars. She is also depicted as a cow sometimes, based on the Egyptian pantheon having an aspect of zoomorphism.

Nut was madly in love with Geb (the god of earth) and through intercourse delivered Osiris, Nephthys, and Set. Nut was also painted inside the sarcophagi of her devotees to protect them until they were reborn.

It is believed that she is a star-studded woman who crouched down to the ground and her legs and arms formed pillars that protected the world from chaos. 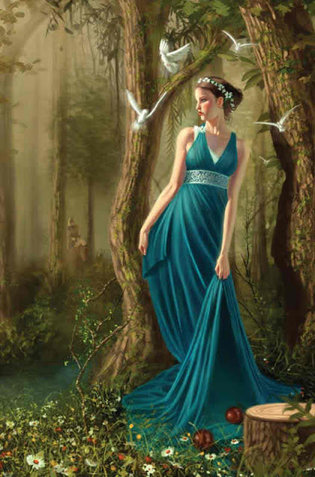 Kore is another name for the Greek Goddess Persephone. She represents the nurturing side of deity and is referred to as the ancient Greek Goddess of springtime. Persephone was one of the Greek virgin goddesses who represent the three kinds of unmarried women in the society. 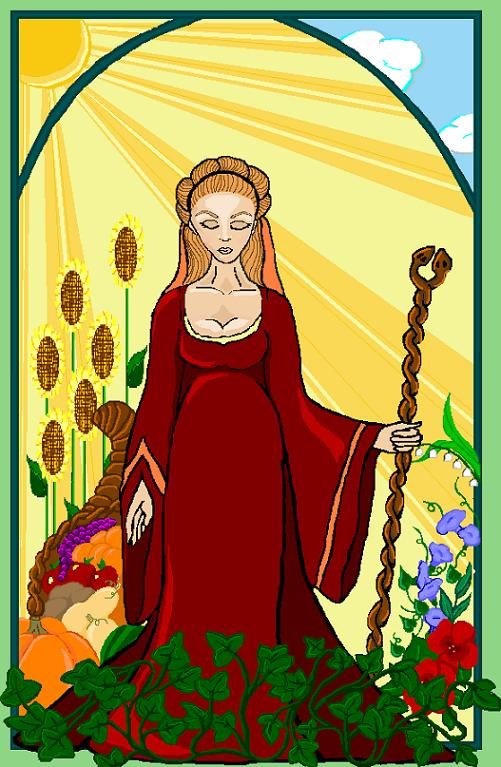 Rosmerta often appears with a Roman god. It is believed that she is his consort and the pictures that highlight her elements depict that he was a powerful partner. Rosmerta means ‘great provider’. She was depicted as a statue, holding a cornucopia and a basket of fruits. Sometimes, she also carries a scepter or a ladle.

The male consort of Rosmerta was either the god of war, the Roman god Mars or Esus. Her influence on modern day culture may be noticed as a character in the Harry Potter films.

There are many other Wiccan Goddesses, but the above mentioned are commonly heard in various cultures.

The gender polarity is highlighted in the religion with both god and goddess having equal contribution and status. One of the things that set Wicca apart from other religions is the lack of access to other people who follow it.

There’s no mosque, church or other building where you can find leaders to answer your questions about Wicca. But you may find a group of people or an informal Wiccan circle which could provide you with information about Wicca and Wiccan Goddesses.