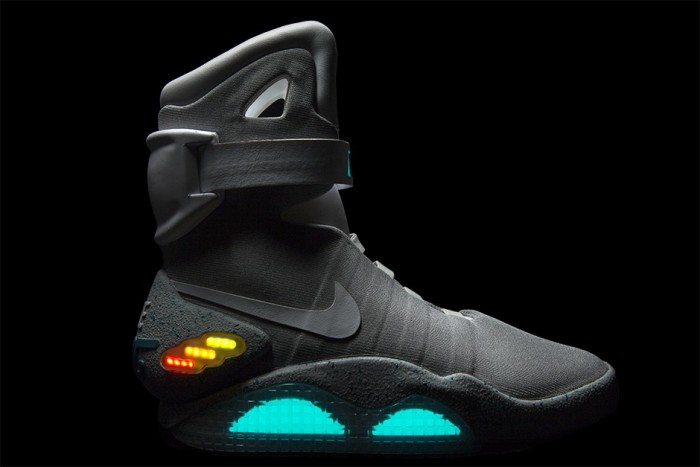 The second installment of “Back To The Future 2” featured a lot of unseen technology ranging from Hoverboards to electronically sizeable jackets and shoes.

Back To The Future part 2 came back in the year 1989 and the future they travel to was 2015 then, that we’ve practically lived past now. For the fans of the franchise, it was the year that will make them witness some part of the technology come alive as they are living in the future that Michael J. Fox traveled to.

A ray of light shimmered when the Hoverboard sort of things started popping all over the world, making the die hard fans of the BTTF franchise restless for the Nike Mags. Soon enough to everybody’s relief, Nike announced an ultra rare working replica of the Nikes that were shown in the movie itself. (10.1)

These shoes were made to replicate the shoe worn by Marty McFly in the Back to the Future II movie. The shoe features glowing LED panels, upper contours, and luminescent Nike logo. Nike Air Mag can glow up to 5 hours from the built-in battery, and about 3000 hours until you’ll need to replace the battery. This feature makes these shoes first rechargeable sneakers from Nike. Only 1500 pairs were ever made, and none of them got to the store. They all were sold on the auction with all benefits going to Michael Jordan’s Fox foundation for research for finding cure of Parkinson disease.  Fox is a star of Back to Future, and he also has a Parkinson disease. Sneakers come with anti-gravity magnetic case, battery charger, and commemorative pin.

Nike Then Introduced HyperAdapt 1.0 Which Are More Practical & Gettable Version Of The Nike Mags

Nike has been teasing these shoes for years now, first auctioning off a non-functional pair that were replicas of the Back to The Future props in 2011. (Side-note: these props were placed on a platform with crew members underneath that pulled on wires to tighten the laces by hand.) Then, last October, Nike designer Tinker Hatfield sent a working prototype to Fox himself. In March this year, the company announced a more streamlined-looking consumer version actually intended for the mass market, and these are the HyperAdapts that go on sale in November.

Each shoe has an internal cable system made from fishing line and a pressure sensor in the sole. When you put your foot in, the cables tighten based on "an algorithmic pressure equation," and this fit can be adjusted throughout the day with a pair of buttons near the tongue.

LEDs in the heel light up when the shoes are tightening and when it's on low battery and all the internal electronics mean that yes, you do have to charge these shoes. It takes three hours for a full charge and each charge last about two weeks, with Nike providing a magnetic clip-on charger similar to that used by Apple for the Apple Watch. It's also worth noting that the thick nylon laces you see on the top of the sneaker are just "visual aids" — they tighten, but they're not what's keeping the shoe hugged to your foot.

No matter how impractical and costly these kicks were but it triggered a long due nostalgia of the good old days, giving it a more priceless psychological value than it was shelved at.