Which Circle Of Hell You Belong To According To Dante’s 9 Circles Of Hell ?

Inferno is the most famous section of the poem. The poem is about the travels of a man through Christian hell, purgatory, and heaven. 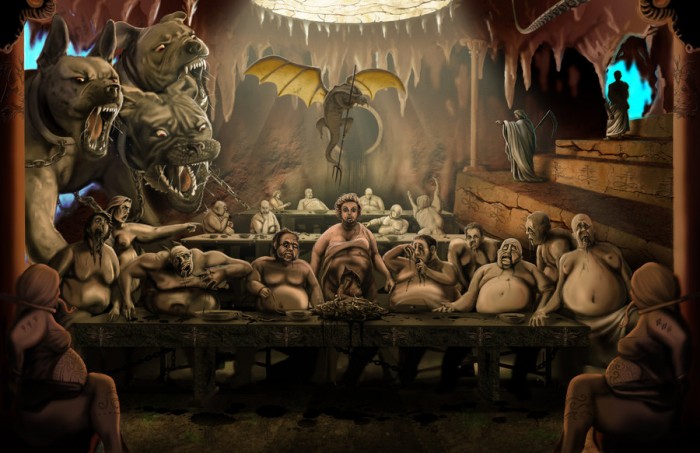 The Divine Comedy is an epic poem (a poem that is very long, like a story) written by Dante Alighieri. It is about a trip through the afterlife. The poem has three parts: Inferno (Hell), Purgatorio (Purgatory), and Paradiso (Paradise, or Heaven). The Divine Comedy is a piece of world literature. 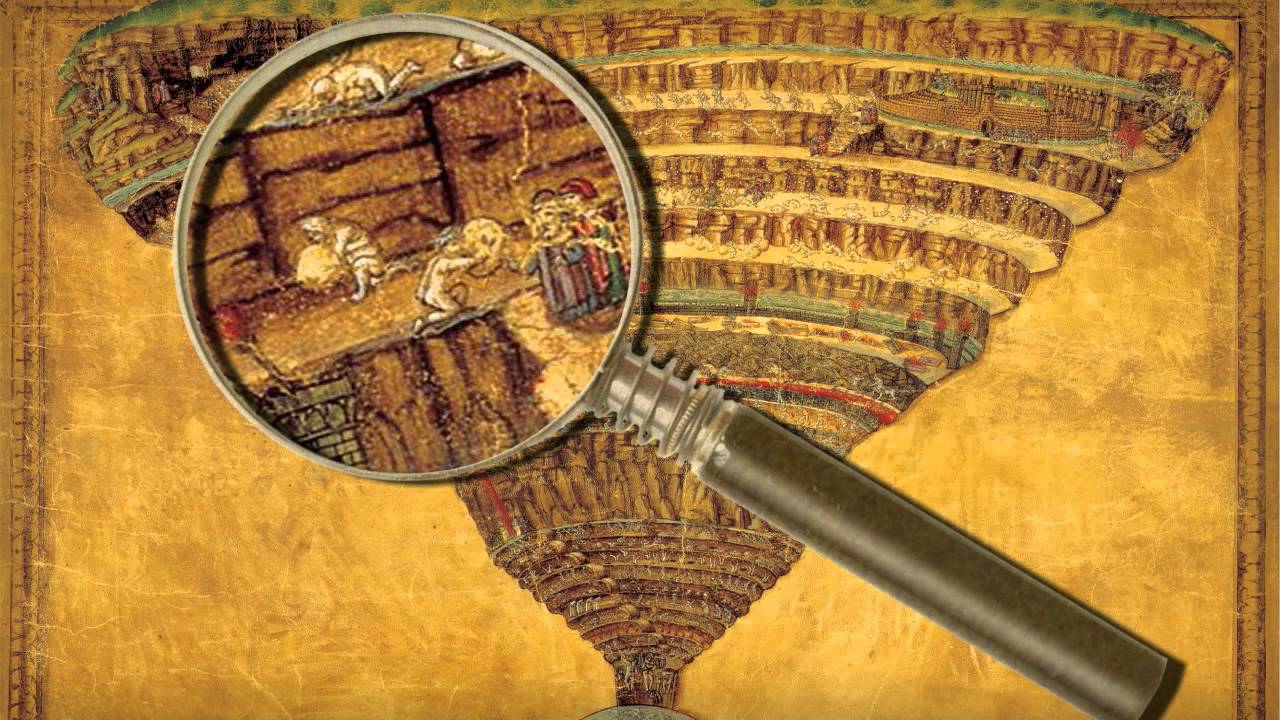 Dante passes through the gate of Hell, which bears an inscription ending with the famous phrase "Lasciate ogne speranza, voi ch'intrate", most frequently translated as "Abandon all hope, ye who enter here."

Despite being a realm for evil souls, it doesn't apply only to humans. It also applies to beings such as monsters (Minotaur and Cerberus), demigods (Phlegyas, a son of the Greek god Ares), and even deities (Plutus, Greek/Roman god of Wealth). 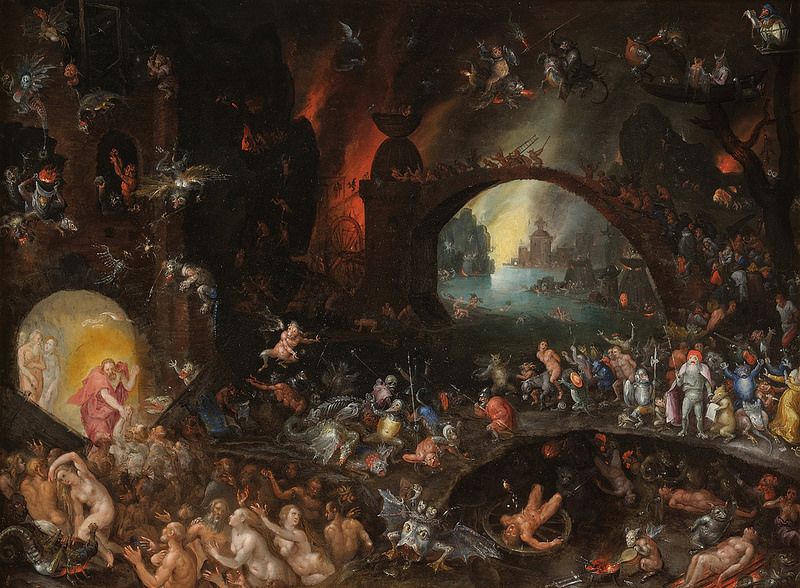 Souls that did not accept Christ are here. This includes atheists, pagans, and the unbaptized. They did not actively sin, but they could not enter Heaven because of their lack of faith and even Hell would not allow them to enter very far.

The punishment for the souls is not physical, but that they have no hope of seeing Christ, so they are mentally punished.

Beyond the first circle, souls are assigned their place by Minos, who wraps his tail around his legs a corresponding number of times,and forces them to descend to their appropriate circle. 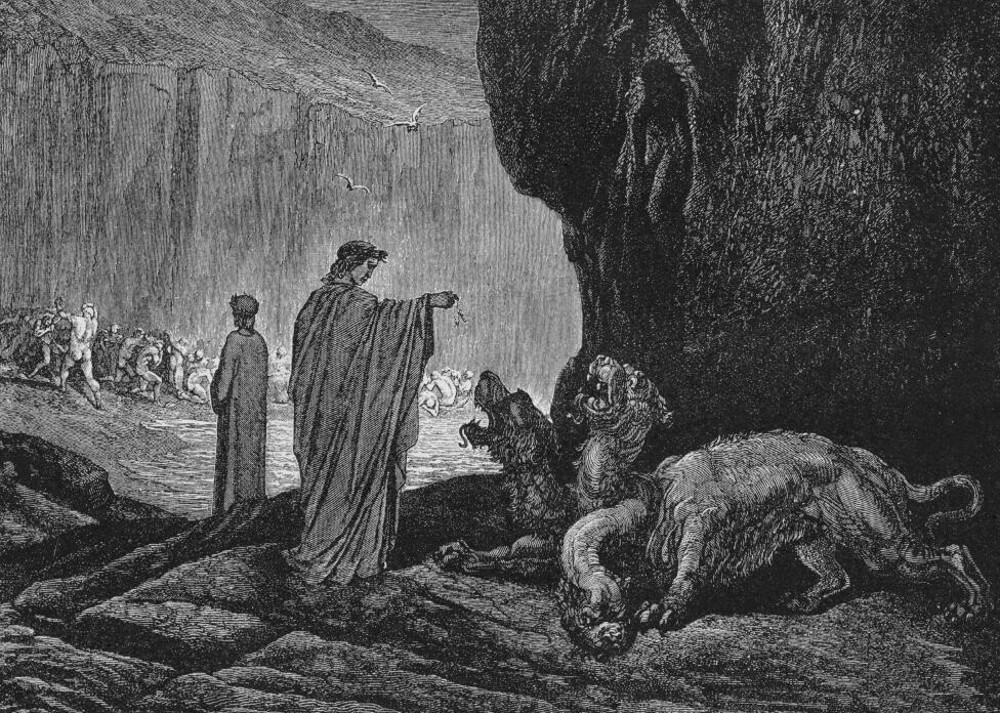 In this circle souls who succumb to lust. They are the first ones to be truly punished in Hell. These souls are blown around in a giant storm which will last forever. This symbolizes the power of lust to blow one about aimlessly. 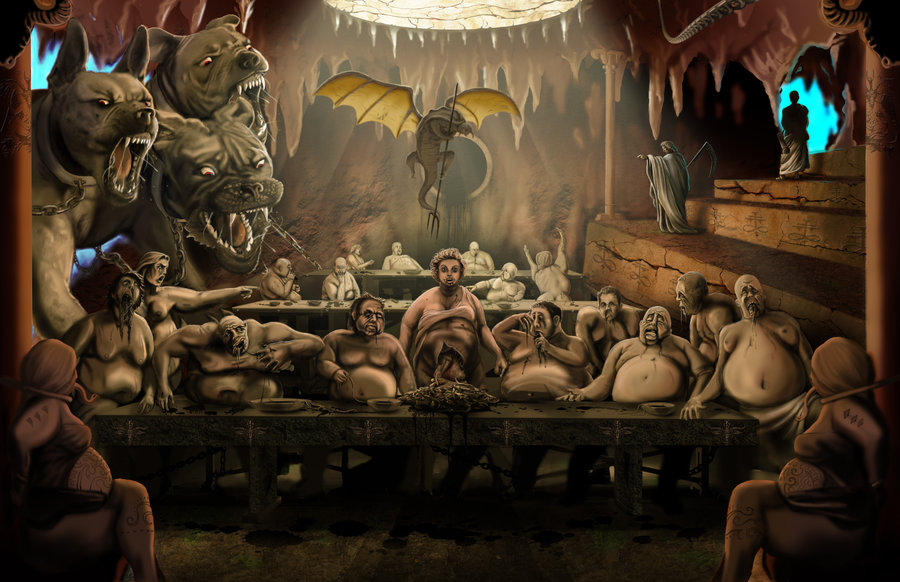 This circle is guarded by Cerberus. The gluttons are punished here, lying in cold mud. While in life they were provided with warmth and comfort from their food, in Hell the souls are punished with cold and heavy rain. Cerberus claws at the spirits, rips at their skin, and bites holes. 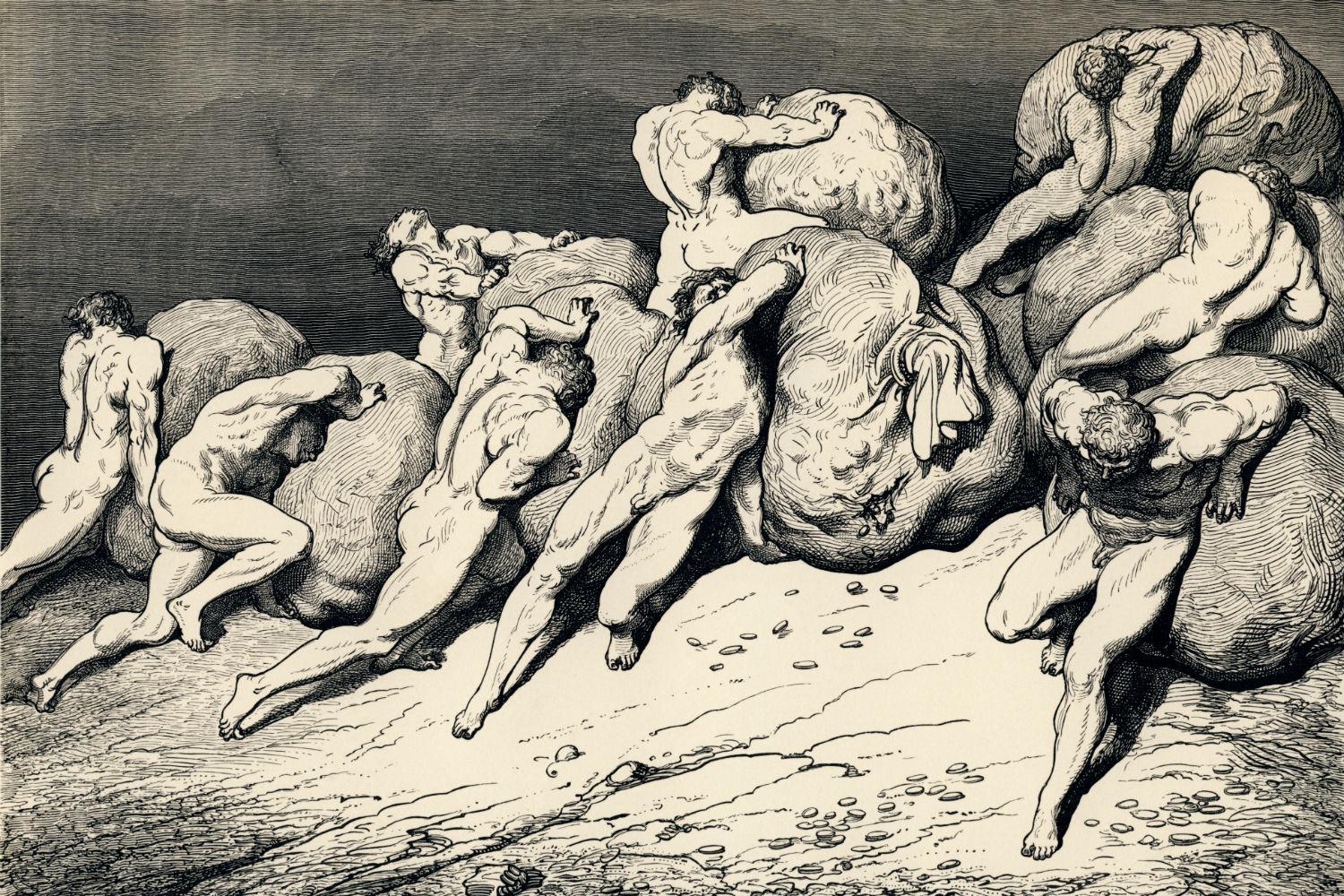 In life the sinners miserly hoarded their money greedily, while the prodigal spent their money foolishly. Both groups are pushing and pulling great bags of gold as they did in life. The greedy are guarded by Plutus, god of riches and wealth. 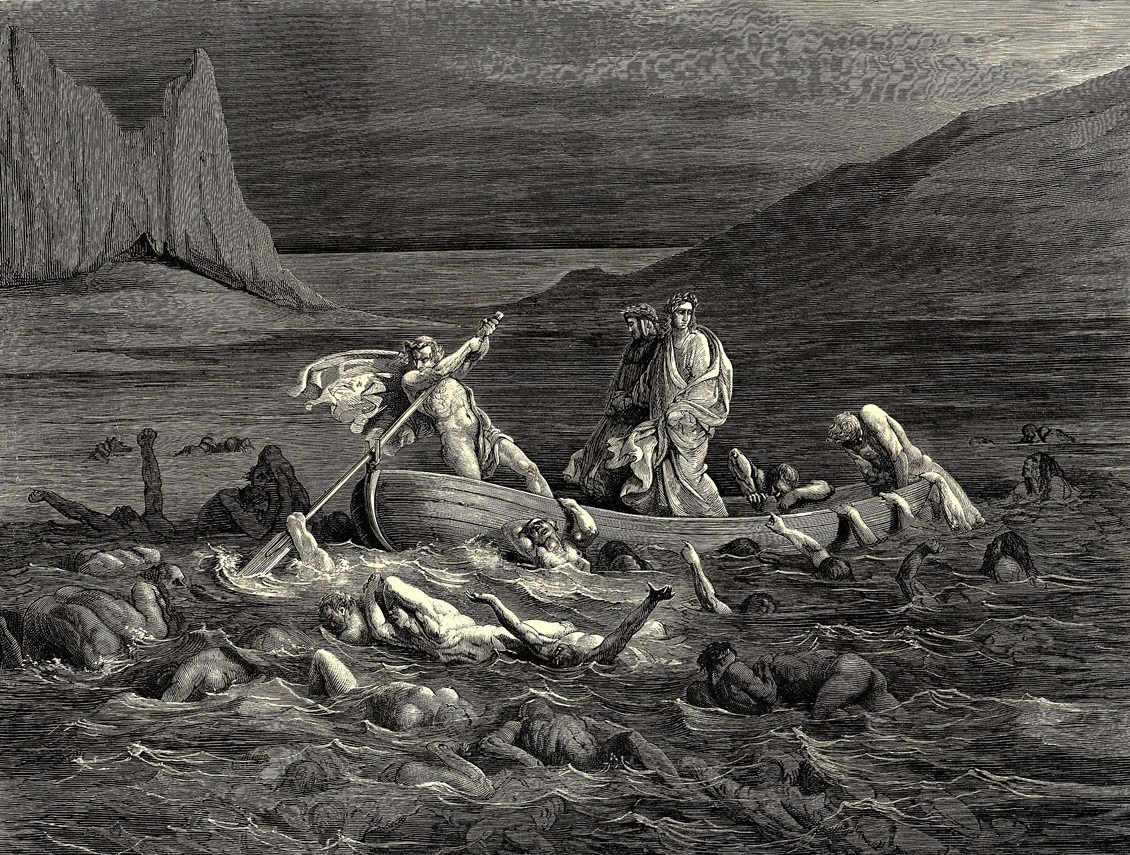 In the river Styx the wrathful fight each other on the surface. The river surrounds the city of Dis, where active sinners are located. When Virgil tries to enter, the angels of Hell slam the door in his face. He and Dante proceed to the gate where Christ entered Hell during his three-day trip to release a select few people. During Christ's Harrowing of Hell he broke the door so it could never close again. 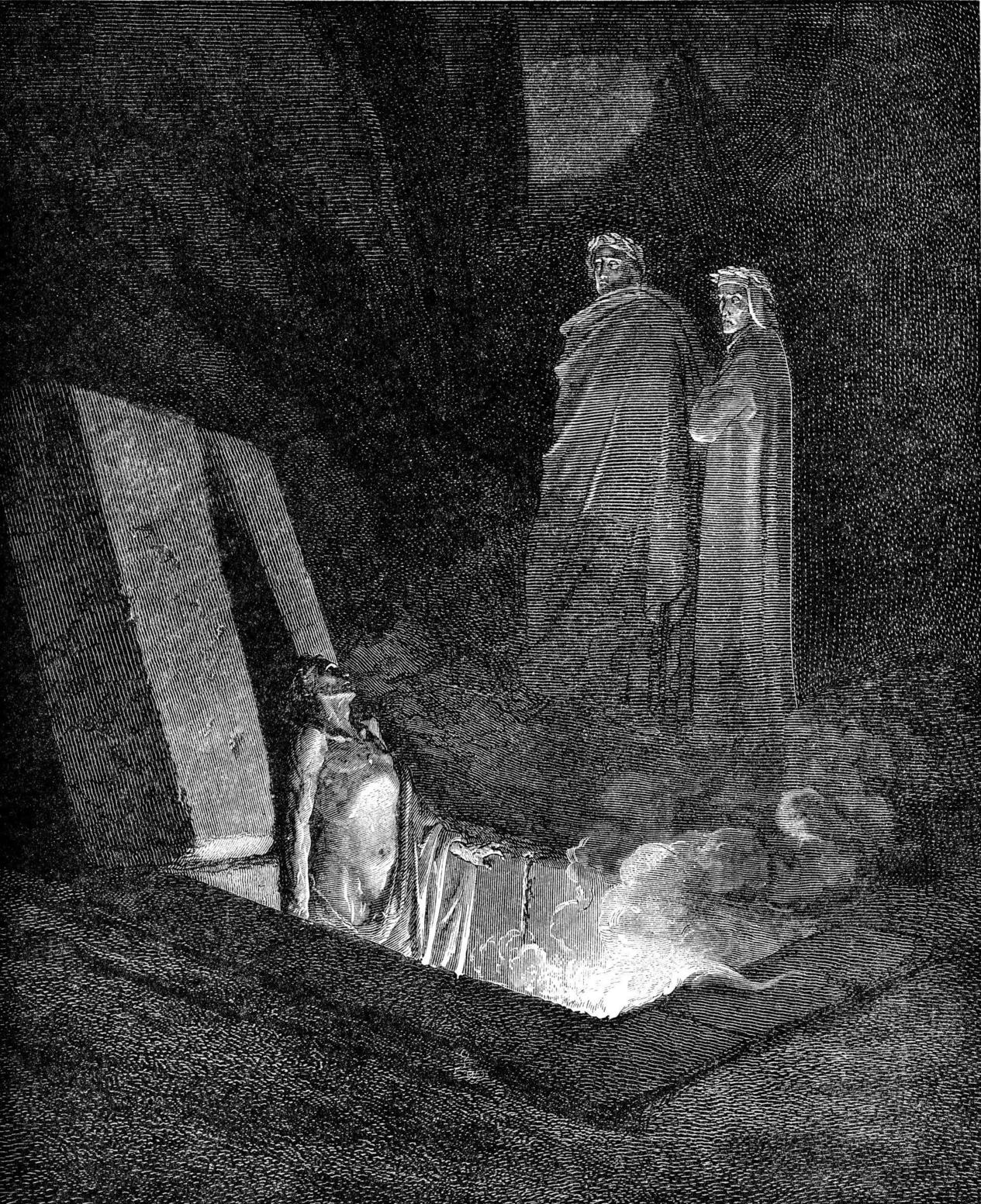 Below Anger is the sixth circle, Heresy. In this circle heretics, such as Epicureans (who say "the soul dies with the body"), are trapped in flaming tombs. Those who have denied the existence of God and the soul after death or who worshiped false idols and devils. In this nether-hell, Pagans, the followers of Epicurus, and atheists are burned in sealed coffins for all eternity. 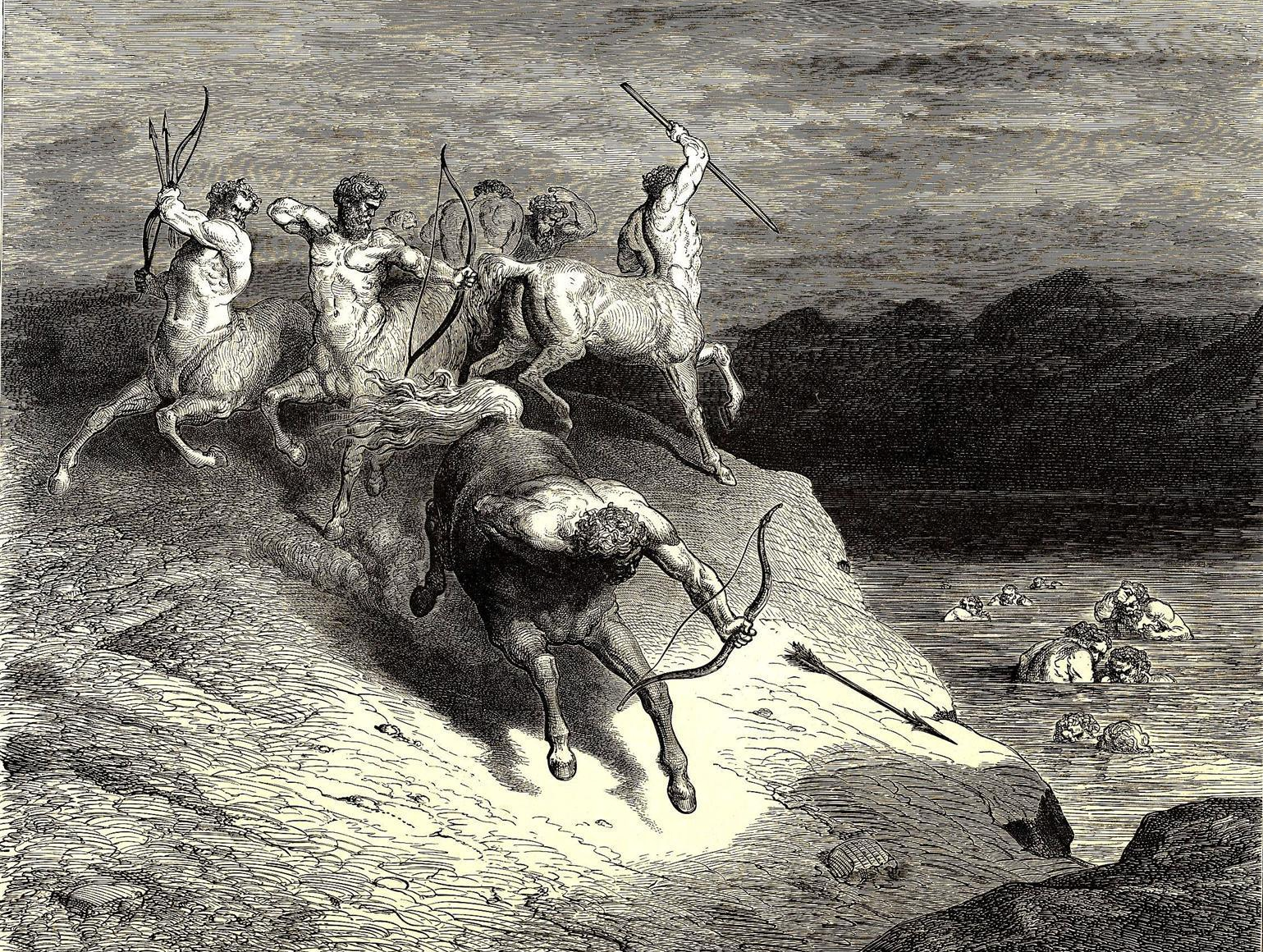 This circle holds those who were violent in their lives. The people who were violent to people and property are in a river of fire. The depth of their placement in the river corresponds to how much you damaged in life. For example, Alexander the Great is immersed up to his eyebrows. The violent against self are turned into plants and are pecked at and ripped apart by birds. The violent to God and the violent to nature are also here. They have to walk on flaming sand for eternity. 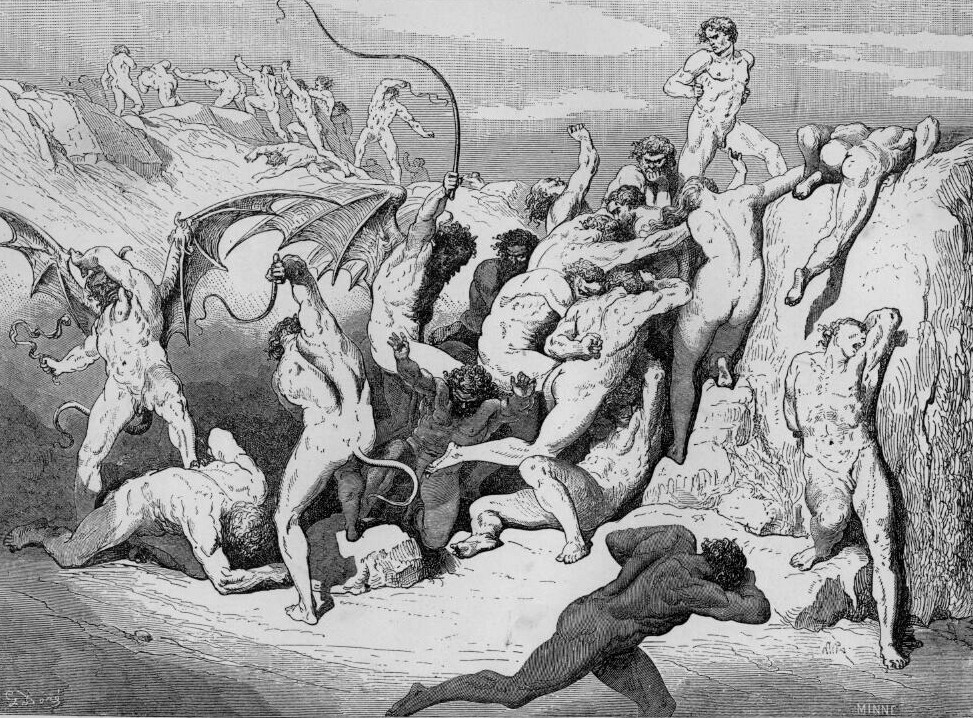 Below Violence is the eighth circle, Fraud. Fraud is an extremely dark place that holds those guilty of deliberate, knowing evil, who used lies and deception for personal gain. This circle is divided into ten ditches, known collectively as the Malebolge and individually as Bolge, each holding a different type of liar and each with a different form of punishment. The ten ditches of Fraud are: 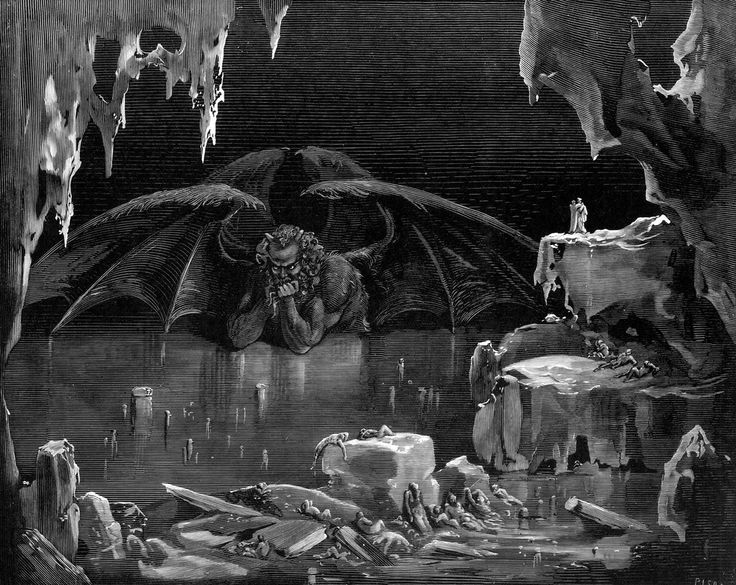 In the very center of Hell, because he sinned the ultimate sin (treachery against God), lies Satan. Satan is described as a beast with three faces, six wings, and is eternally weeping from his six eyes. Each of Satan's mouths chews on a famous traitor from history. Brutus and Cassius are being chewed feet-first. The center mouth is chewing on Judas Iscariot. His head is being chewed on by Satan, and his back is being skinned by Satan's claws.

Dante and Virgil escape by climbing down Satan's fur through the center of the earth and out the other hemisphere, where they will climb Mount Purgatory.

5 Most Inspirational Bible Stories to Uplift You