Tethys Sea: Over 65 Million-Year-Old Sea of the Mesozoic Era

The present-day Mediterranean region forms the descendant of the Tethys Sea. This several million-year-old sea separated the two ancient supercontinents of Gondwana and Laurasia. 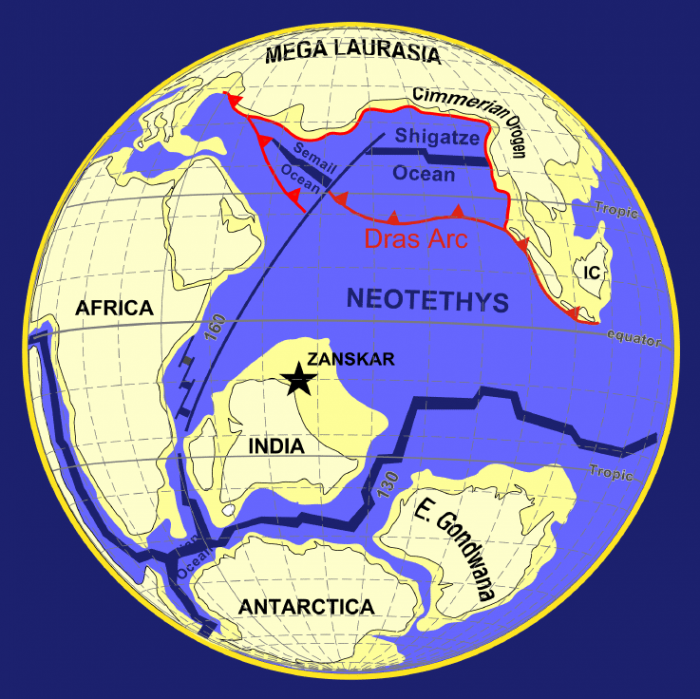 Tethys Sea, or Tethys Ocean, was the sea that stretched between the two great ancient supercontinents namely Laurasia (north) and Gondwana (south). Dating back to the Mesozoic Era (251-65.5 million years ago), this sea’s name originated from the water deity of Greek mythology ‘Tethys’ who was known as the Titaness of freshwater.

Located before the opening of the Indian and Atlantic oceans at the time of the Cretaceous period, there were two Tethyan seas that successively existed between Laurasia and Gondwana during the Mesozoic Era, namely, Paleo (Old) Tethys Sea and Neo (New) Tethys Sea. 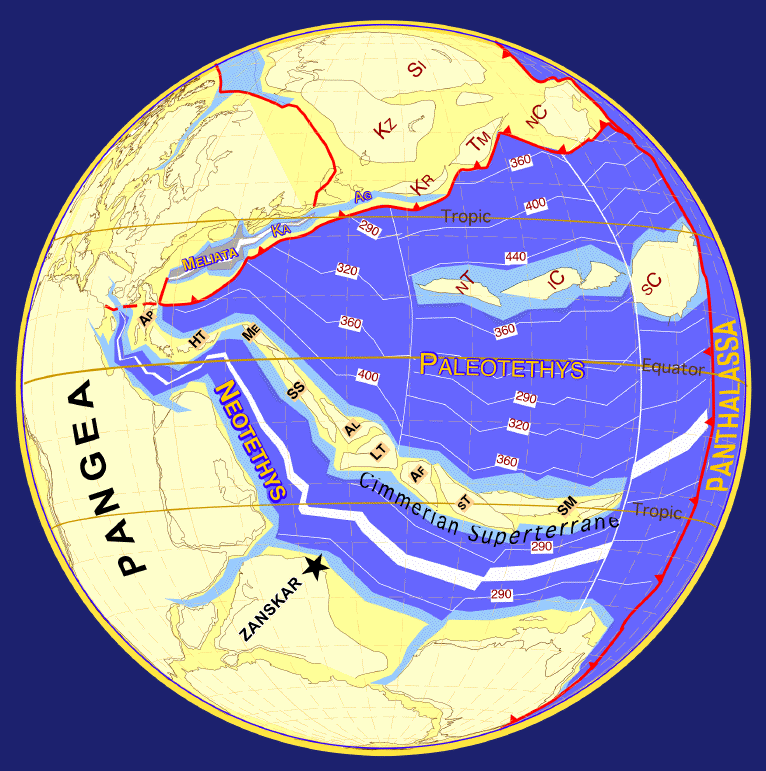 Paleo Tethys Sea was the sea that formed during the Permian and Triassic periods (nearly 300-200 million years back). It came into being when all the land masses merged to create Pangea supercontinent near around 320 million years ago.

Paleo Tethys constituted of the eastward-opening Oceanic of Pangea where present-day Mediterranean area lies. This sea wiped was out due to the separation of Cimmerian continent (a strip of continental material) from northern Gondwana and its rotation in the north direction. It gradually collided with the southern edge of Laurasia during the Early Jurassic Epoch (around 180 million years ago).

The evidence of the Paleo Tethys Sea is retained in the sea sediments which has now merged into mountain ranges spreading from northern Turkey through Transcaucasia (the Caucasus and the Pamirs), northern Iran and Afghanistan, northern Tibet (Kunlun Mountains), and China and Indochina. (8.1) 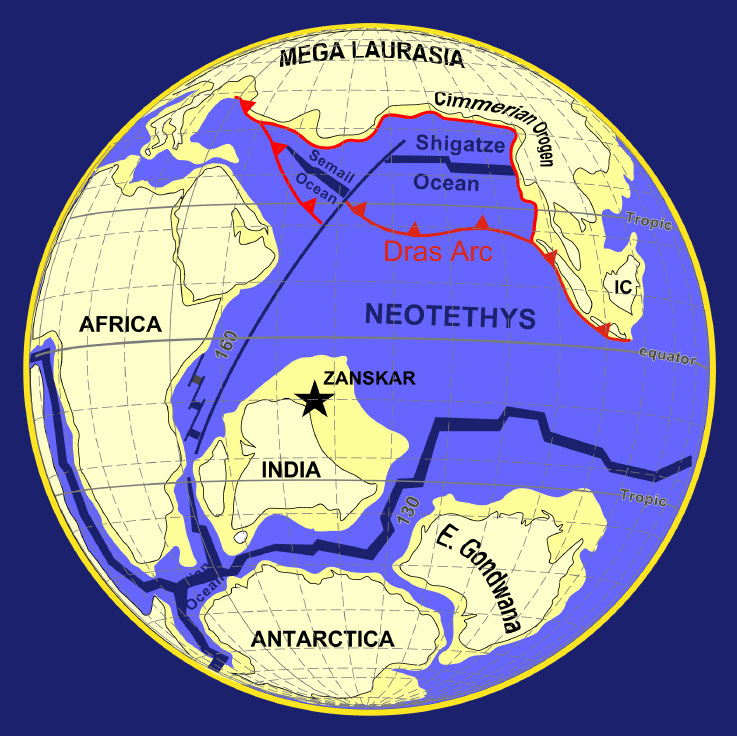 The Neo Tethys Sea, better known as the Tethys Sea or simply Tethys, emerged as a result of the rotating Cimmerian continent in the earliest part of the Mesozoic Era. At the time of the Jurassic period, the dissolution of Pangea into Laurasia (north) and Gondwana (south) led to the opening of the Tethys Sea into a supreme seaway of the Mesozoic.

A huge amount of warm water ran toward the west between the continents and formed a connection between the major seas, thereby playing a key role in the heat transport and climate control of the Earth.

As the fossil evidence of Tethyan tropical faunas suggests, the Tethyan seaway experienced expansion and converged with seaways flowing north during the major sea level rises. 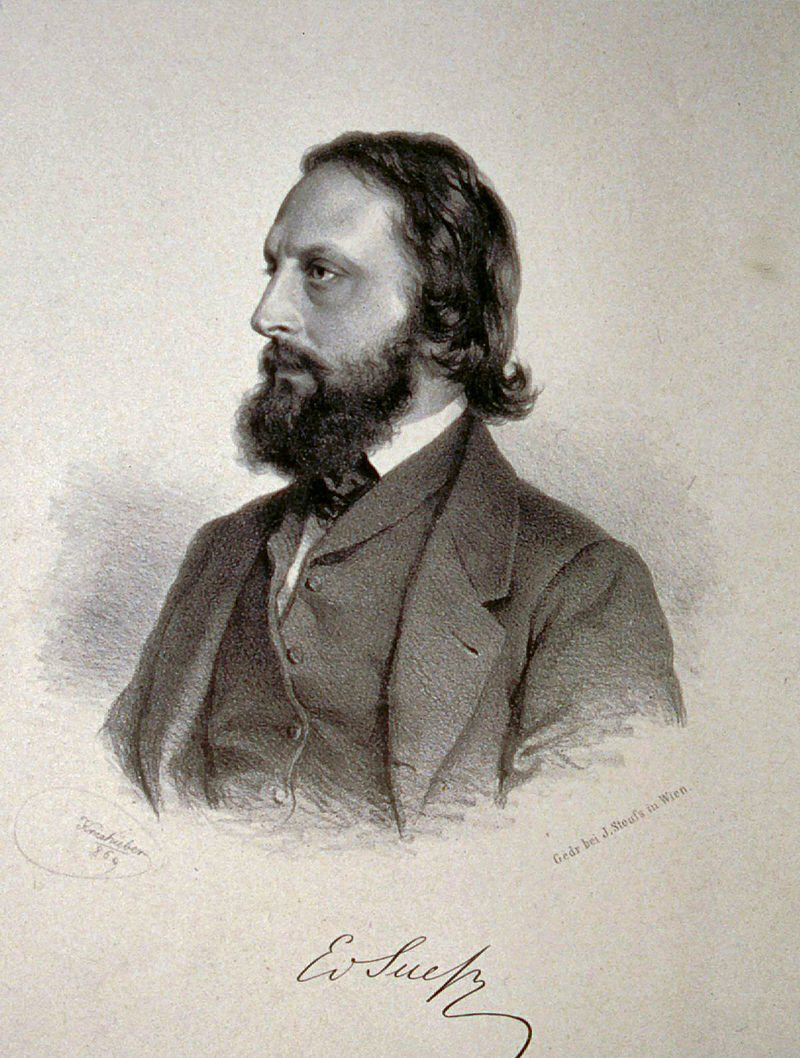 Several palaeontologists and geologists including Austrian palaeontologist Melchior Neumayr (1885), Austrian geologist Eduard Suess (1893) and others proposed theories about the existence of Tethys Sea. They proposed that the Tethys Ocean existed between ancient and extinct continents Laurasia and Gondwana II. 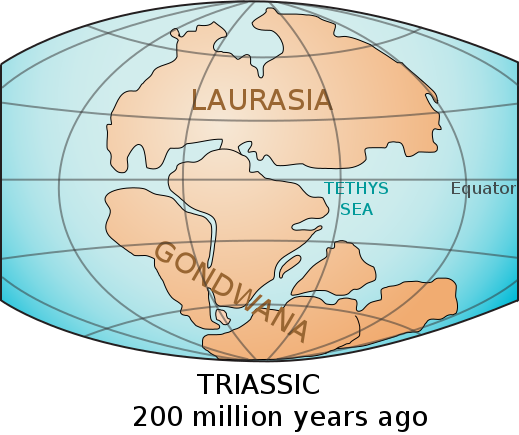 More than 400 million years, the continental terranes disjoined from Gondwana in the Southern Hemisphere to migrate toward north so as to create Asia in the Northern Hemisphere. (8.2)