Learn When & Where Did the ‘Snakes and Ladders’ Game Originate

The classic ‘Snakes and Ladders’ game, which is loved by kids and young people, is an ancient game. Know about its origin history here. 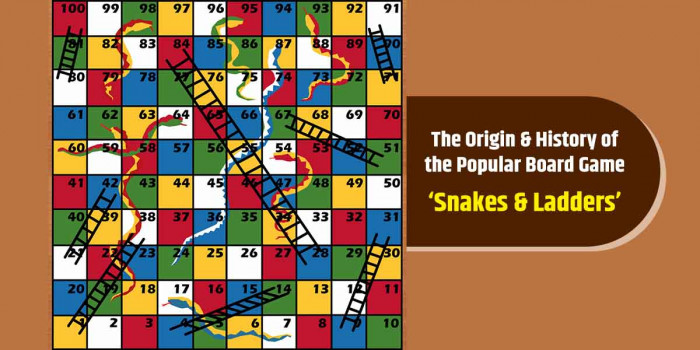 Every kid has played the game of Snakes and Ladders at least once in their lifetime. And this is one game every generation would very well recognize. The beauty of this game is that today also, the Snakes and Ladders game has not lost its charm, and every child still has this board and dice game in their closet. But did you ever think that when and how was the game created? Or where did it originate?

Well, this popular game, which is now regarded as a worldwide classic, originated in ancient India around the 2nd century AD. Before it got its universal name “Snakes and Ladders,” this board game was called “Moksha Patamu.” It was created to teach children about life morals and “karma.” The game was further commercialized and marketed, and it eventually became one of the most famous board games in the world.

Let us know in detail about this classic dice board game.

What Does a Typical Snakes & Ladders Board Look Like & How is it Played? 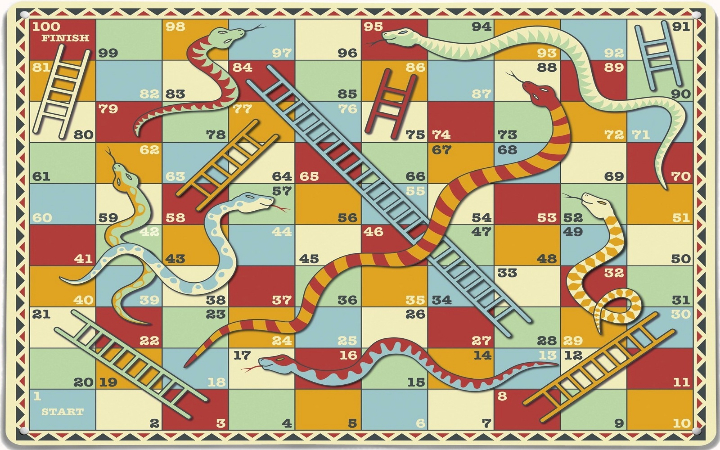 Though you may know how it is played, let us give you a brief on it. The game is played between two or more players on a gameboard with numbered (1-100) grid squares. The pictures of several "ladders" and "snakes" are there on the board, and each ladder & snake is connected to two particular board squares.

The game aims to navigate your game piece, as per the dice rolls, from the start (bottom square- numbered 1) until the finish (top square- numbered 100). On the way, a ladder helps you climb up and move ahead in the game, and a snake takes the player down the board and several squares back. As this is a simple race-based game, your victory is decided by your luck.

The Origin and History of Snakes & Ladders Game 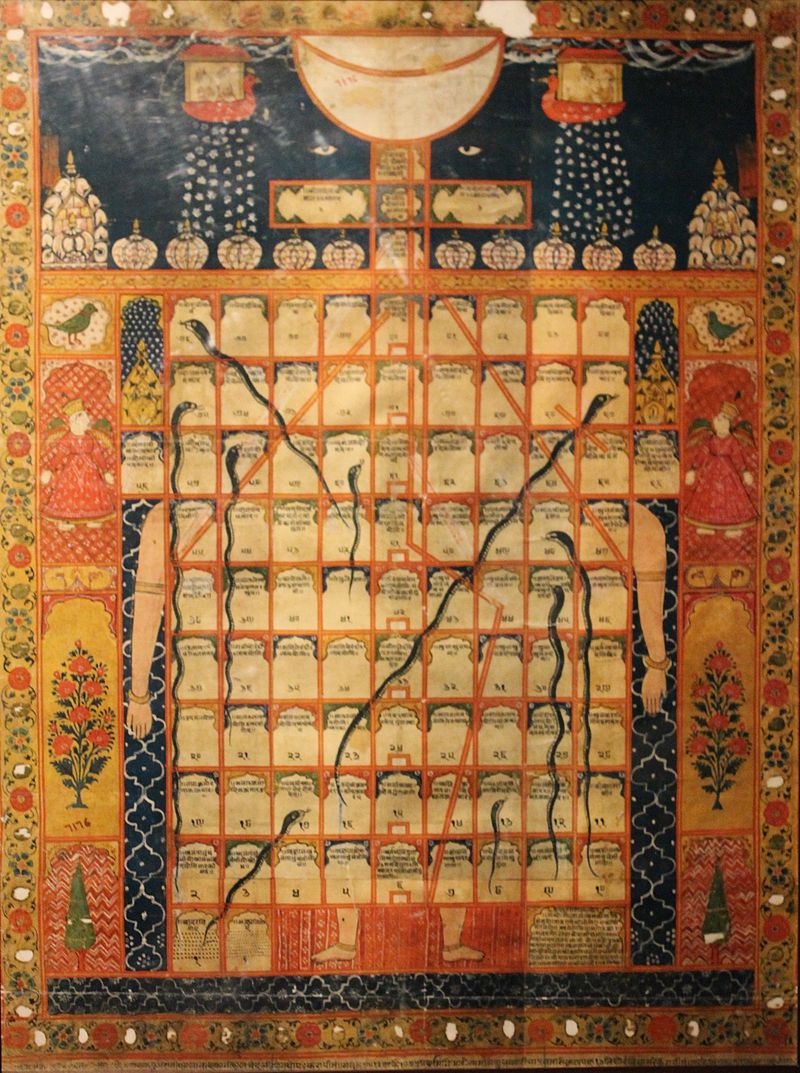 As part of a family of dice-board games that included Gyan Chauper and Pachisi (present-day Ludo), the Snakes and Ladders game finds its origin in India and was created somewhere around the 2nd century AD. Interestingly, the dice you use to play this & other board games were also invented during the Indus Valley Civilization.

In ancient India, the game was popular by the name “Moksha Patam.” In 1892, the underlying ideals of the game served as an inspiration for a version introduced in Victorian England (where it was sold with the name "Snakes and Ladders"). And as it came to England, the English virtues and vices replaced the Indian ones to better reflect the Victorian doctrines of morality.

Britain’s Snakes & Ladders’ association with India and Gyan Chauper began with the return of colonial families from India. This relationship reflects in the art and decor of the early English boards of the 20th century.

Later, in the US, the game pioneer Milton Bradley introduced the concept as Chutes and Ladders (an improved new version of England's famous indoor game) back in 1943.

By this time, a few pictorial references to the Indian culture were found because of the economic demands of the war and the British rule's end in India. Though the game's sense of morality has endured through the generations, the physical allusions to religious and philosophical ideology in the game (presented in Indian models) seem to have faded.

Also, during the Pala-Sena’s period in India, evidence of a possible Buddhist version of the game existed. In Andhra Pradesh, the game is better known as Vaikunthapali or Paramapada Sopana Patam (the ladder to salvation) in Telugu. And in Hindi, the game is known by different names such as Saanp aur Seedhi, Saanp Seedhi, and Mokshapat. Moreover, in Tamil Nadu, it is called Parama Padam, and Hindu god Vishnu’s devotees often play it during the Vaikuntha Ekadashi festival to stay awake during the night.

Not to mention, ancient India is not only the inventor of the original version ‘Moksha Patam’ but also an intellectual strategy board game like chess. Know other clever inventions made by Indians. 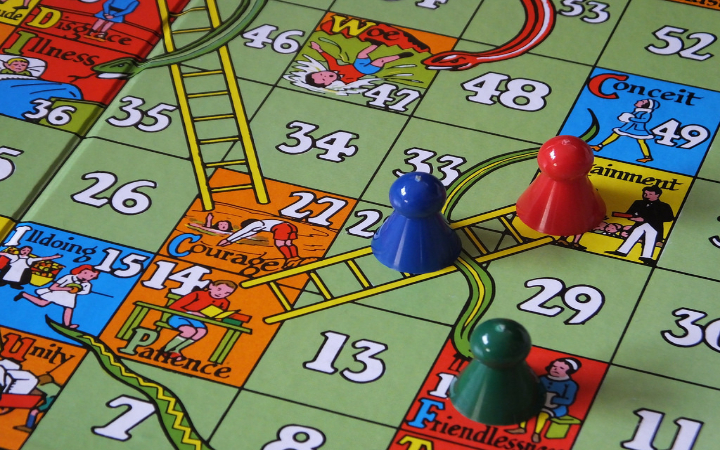 As we mentioned earlier, the game is also interpreted and used as a tool to teach the effects of good deeds and bad ones. In the ancient version ‘Moksha Patam,’ the board was covered with symbolic images: the top featured gods, angels, and majestic beings, and the rest of the board had pictures of animals, flowers, and people.

Moreover, it was associated with the traditional Hindu philosophy contrasting karma and kama or destiny and desire. It stressed on destiny, as opposed to games like pachisi, which focused on life as a mixture of skill (free will) and luck.

While the ladders represented virtues like generosity, faith, and humility, the snakes represented vices like lust, anger, murder, and theft. The underlying morality lesson was that you could attain salvation (Moksha) by doing good and will inherit rebirth to lower forms of life by engaging in evil deeds.

The game’s Indian version ‘Moksha Patam’ had more snakes than ladders. That acts as a reminder that a path of good is way harder than a path of sins. Reaching the last square- numbered 100 depicted the attainment of Moksha (spiritual liberation). And the English counterpart had both in equal numbers. This concept of equality depicts the cultural ideal that for every sin you commit, there is one more chance at redemption.

The historic version had its roots in morality lessons, in which a player's progression up the board represented a life journey complicated by virtues (ladders) and vices (snakes). Chutes and Ladders, a commercial version of the game, had different morality lessons.

The Jain philosophy’s Gyan Chauper/Jnana Chauper (game of wisdom) encompassed concepts like karma and Moksha. In England’s version of the game: Squares of Fulfillment, Grace, and Success were accessible by ladders of Thrift, Penitence, and Industry, and the snakes of Indulgence, Disobedience, and Indolence made one end up in Illness, Disgrace, and Poverty.

Indeed a true classic: the game of Snakes & Ladders has a worldwide fanbase and is loved by players of all age groups even until today. No doubt, the legacy of the game dates back to many many centuries ago and would go on for many more to come.

So now, tell us if you enjoy playing this game with your friends or family sometimes or not?

Does This Giant Rock Sphere Found in Bosnia Belong to a Lost Civilization?