Cuban Missile Crisis was the historic 13-day crisis between the superpowers USA and USSR that happened in October 1962. That’s when Cold War was on the brink of escalating into a nuclear war.

More than 50 years ago in October 1962, there came a moment when the confrontation between the Cold War between the Soviet Union and the United States almost escalated into global nuclear war. And this confrontation was the “Cuban Missile Crisis” in which the Soviet nuclear-armed missiles were found in Cuba, just 90 miles away from the US.

This crisis is also known by other names such as Caribbean Crisis, October Crisis, and Missile Scare. This 13-day crisis officially began on 16 October 1962 and ended on 28 October 1962.

The Discovery & Reporting of Missiles 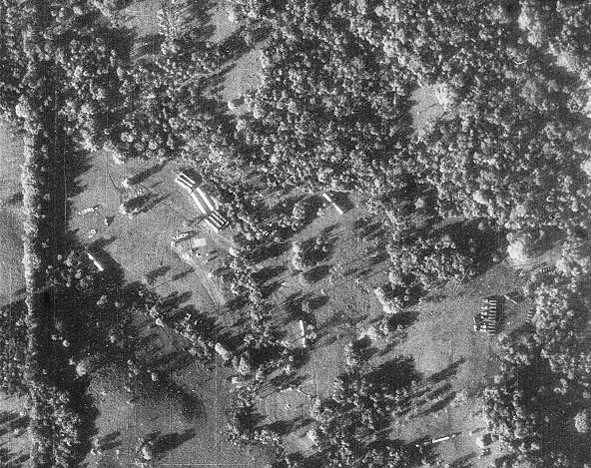 The then Cuban revolutionary and politician Fidel Castro formed an alliance with the Soviet Union after taking over Cuba in 1959. Under his leadership, Cuba relied more on Soviets for the military and economic aid. The US and the Soviets (along with their allies) got into Cold War that involved big political and economic clashes.

Both of these superpowers engaged in one of their biggest Cold War confrontations when an American U-2 spy plane pilot, passing over Cuba at a high altitude, snapped the installation of a Soviet SS-4 medium-range ballistic missile on 14 October 1962. 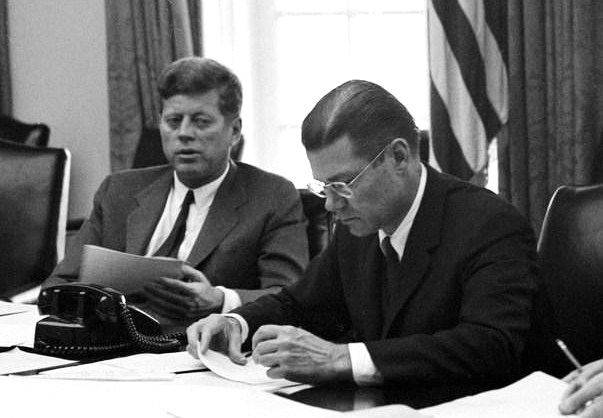 US President John F. Kennedy was informed about the situation two days later. As an immediate response, he called for a group of advisors and officials (called ExCom or executive committee). For the following two weeks, the President and his team of officials struggled with this diplomatic crisis. 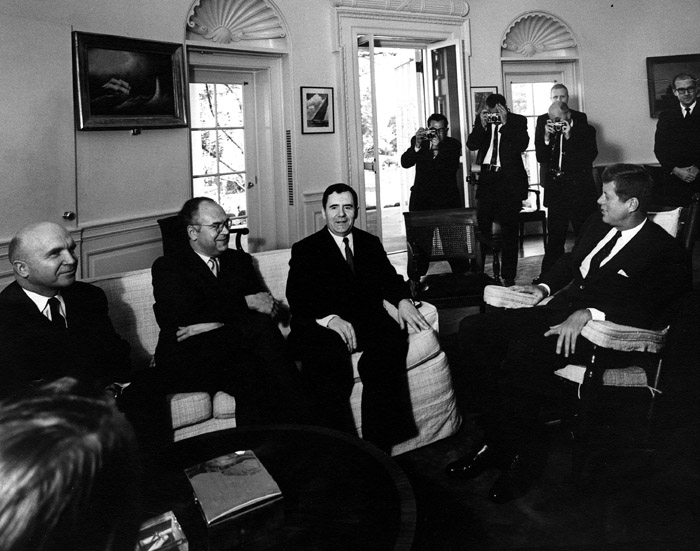 Two Operational Plans (OPLAN) were taken into consideration. One was OPLAN 316 and the other one was OPLAN 312. OPLAN 316 anticipated a complete encroachment of Cuba by the army and marine units, backed by Navy, Air Force, and naval airstrikes.

Enactment of Naval Blockade or “Quarantine” 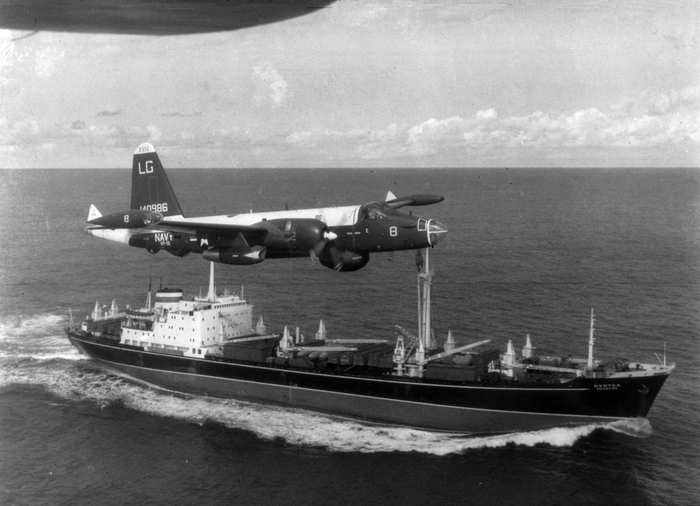 After taking into account the alternatives of invading Cuba, blockade of the island, or diplomatic stratagem, President Kennedy settled on the decision of placing a naval “quarantine” or blockade on Cuba for preventing any further missile shipments.

Quarantine was declared on 22 October and a warning was sent out that the U.S. forces would seize “offensive weapons and associated matériel” that Soviet vessels might attempt delivering to Cuba. In those days, the Soviet ships heading for Cuba changed their course away from the quarantined zone. 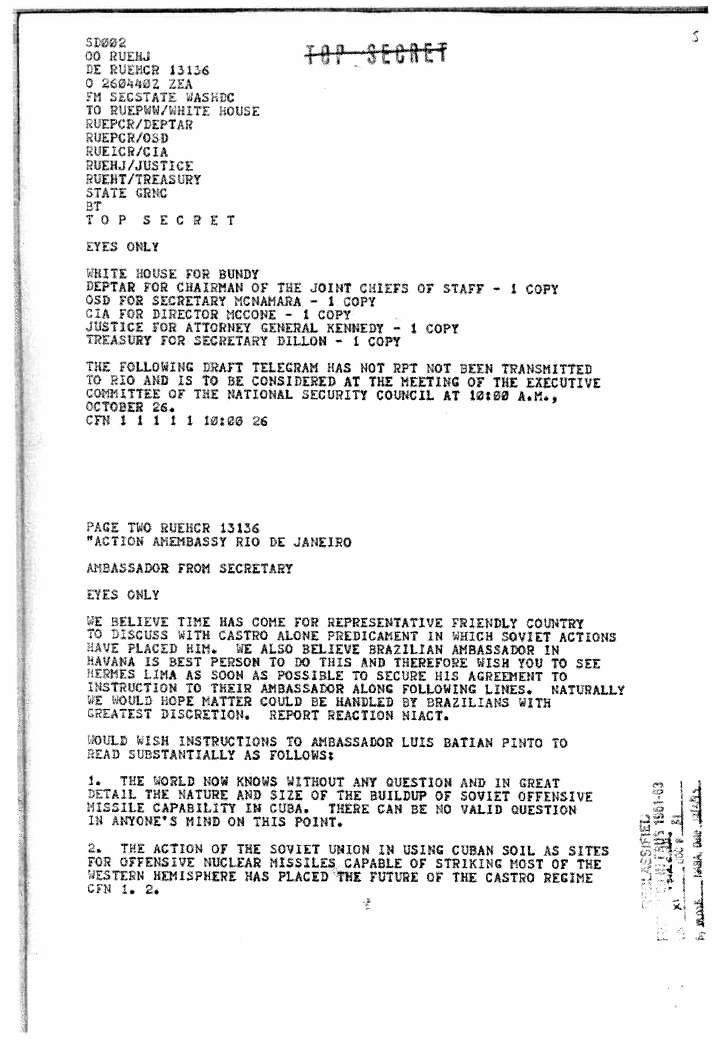 Amid the great tension, the American and Soviet leaders thought of a way to get out of the deadlock. They exchanged many letters and other communications at the time of crisis. On 26 October, Khrushchev sent a message to Kennedy wherein he proposed the removal of Cuban missiles in exchange for a promise by the U.S. that it will not invade Cuba.

On 27 October, the Soviet leader Khrushchev sent another letter offering that it will dismantle its missiles if the US withdraws its missile installations in Turkey. Officially, the Kennedy administration decided upon accepting the terms of the first agreement and ignored the second Khrushchev letter completely. However, unofficially, the American officials also agreed to remove their missiles from Turkey.

Accidentally on the same day, a U-2F captained by USAF Major Rudolf Anderson drifted its forward location at McCoy AFB, Florida. The aircraft was hit by a surface-to-air-missile S-75 Dvina (launched by Cuba). Consequently, Anderson was killed and the aircraft was bombarded. The stress in negotiations between both the superpowers aggravated. But later, it was known that a Soviet commander acting on his own authority decided to fire the missile.

The End Of Crisis 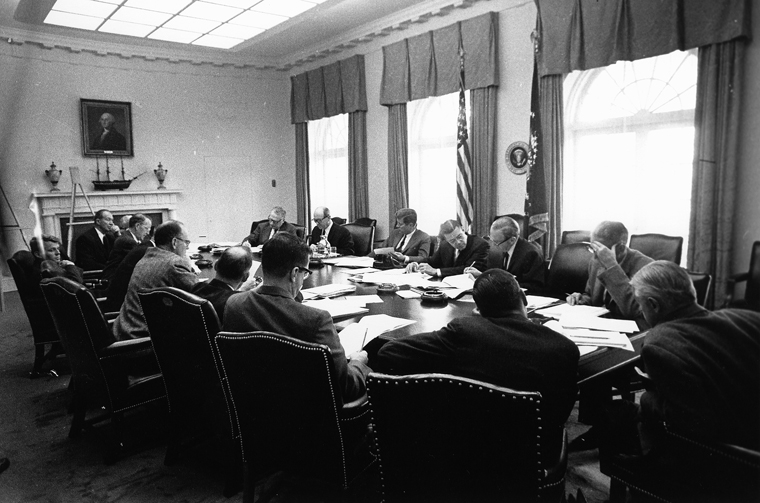 On 28th October morning, Khrushchev broadcasted on Radio Moscow. He said, "the Soviet government, in addition to previously issued instructions on the cessation of further work at the building sites for the weapons, has issued a new order on the dismantling of the weapons which you describe as 'offensive' and their crating and return to the Soviet Union."

Learning about the public statement, Kennedy embraced the Soviet offer despite strong opposition from senior advisers. Kennedy said, "We can't very well invade Cuba with all its toil and blood when we could have gotten them out by making a deal on the same missiles on Turkey. If that's part of the record, then you don't have a very good war."

With immediate response, Kennedy issued a statement calling the letter "an important and constructive contribution to peace." He further wrote this in the formal letter: 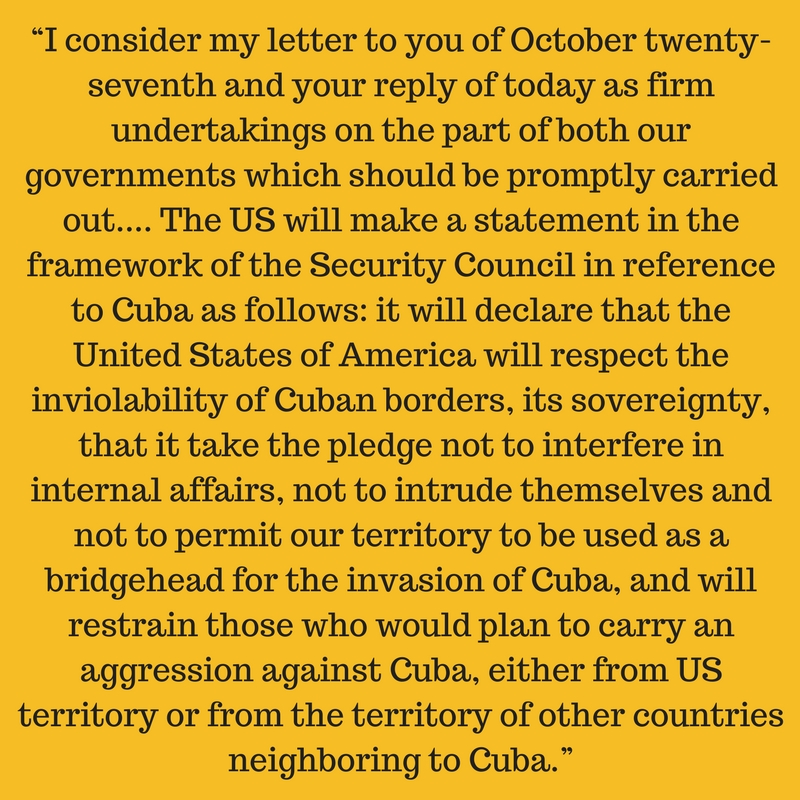