Knifey Spoony: The Game Only True Simpsons Fans Will Know

Simpsons are the classic, funniest, and most popular animated families of all time. And if you’re a die-hard Simpsons fan, you ... 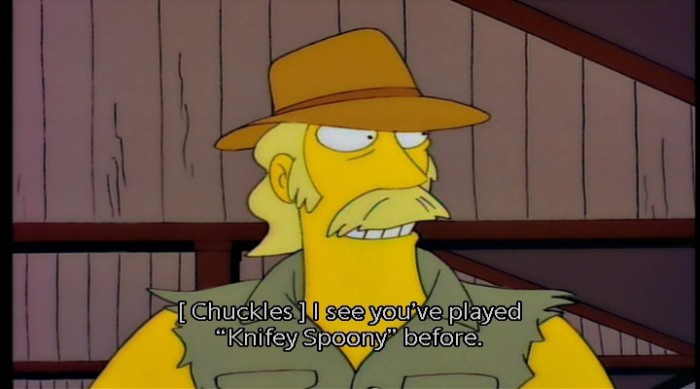 Simpsons are the classic, funniest, and most popular animated families of all time. And if you’re a die-hard Simpsons fan, you must have watched the “Bart vs Australia” episode from Season 6.

Do you recall the time during which Springfield's first family moves to the land down under to fight the indictment of Bart regarding a fraud? As Bart & Lisa waited for the trial, they are challenged to play a local game of Australia called ‘knifey spoony’.

While waiting for the trial, Bart and Lisa are challenged to a local game of "Knifey Spoony".

What Exactly is This Australian Game ‘Knifey Spoony’?

Knifey Spoony is basically a game of Australian origin in which two or more (normally two) players challenge each other and the one with the larger/largest knife wins. In this game, any spoon can beat any knife. But a player having a spoon gets disqualified if the other player identifies and declares his/her use of the spoon.

In simple words, it’s a stranger’s attempt to fooling someone by making him/her believe/admit that a spoon is a knife. (6.1)

And this is the iconic conversation that took place between a man and Bart Simpson in Simpson’s Season 6 episode “Bart vs Australia”.

Sometimes, it’s also used as a slang reference for playing the 'Resident Evil: 4' game. Knife attacks are used as a strategy all over the game to safeguard ammo for sections whenever ammo is needed. ‘Knifey spoony’ also has relevance to other games that involve killing zombies such as 'Dead Rising'.

What’s more interesting is that it’s also quite a popular Australian sport in which the players solve their debates based on knifey-spoony outcome. (6.2)

A Simpsons superfan named ‘richyrichuk’ on Imgur paid a tribute to its legendary episode 6 by designing a real 2-player game. What’s commendable is that he not only carefully crafted the game's wooden box, carved the title, instructions, and knifey-spoony sign but also covered the box in red velour. 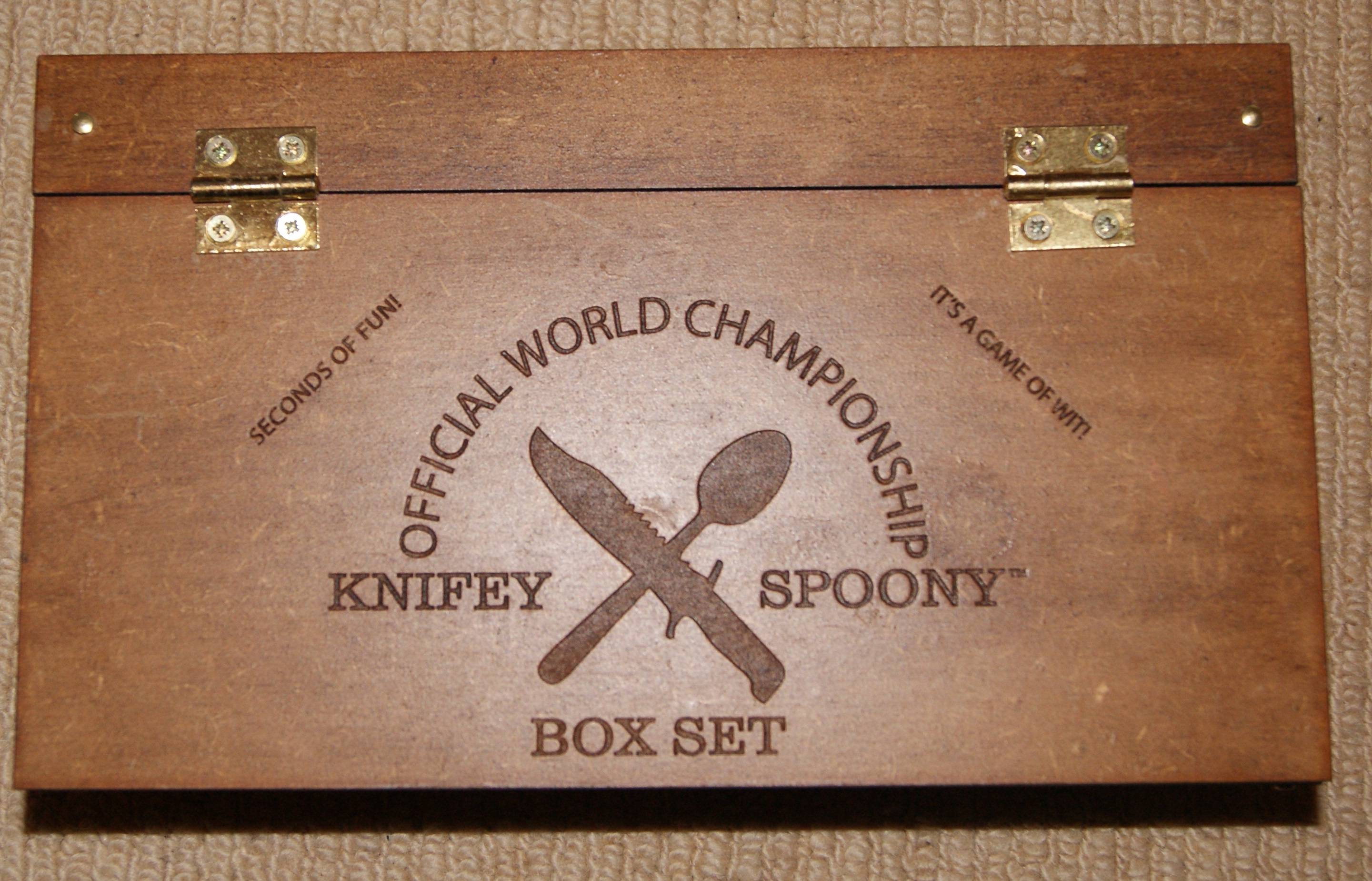 And this is how it is played!

1) Two players have to choose their "knives". And out of the two, one knife is actually a spoon.

2) The players put forward their knives and compare them. The player having the larger knife wins. 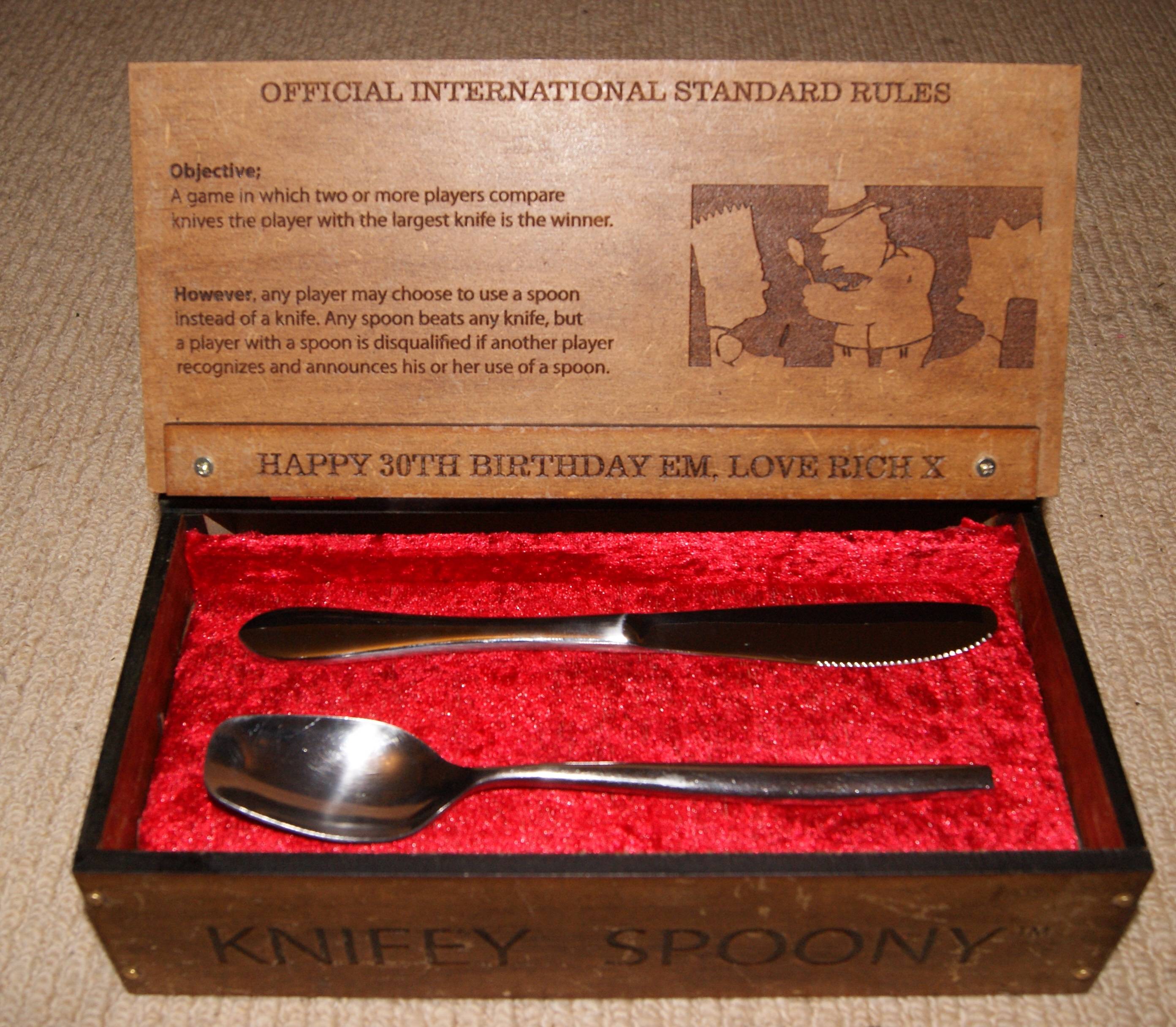 The possible alteration: As spoons always beat knives and if either of the players finds out that the other player's knife is actually a spoon, he/she may proclaim that. And so the declarer automatically wins.

You can also watch the epic scene from the 1986 Australian-American comedy movie ‘Crocodile Dundee’.

So have you played Knifey-Spooney before? Do tell us in the comments about it!