WWE Star Roman Reigns Reveals He Has Leukemia, Takes Off from Ring

WWE superstar Roman Reigns has revealed that he is suffering from leukemia (blood cancer) and just started treatment for the same. And, according to the Wrestling Observer Newsletter, his comeback date is a “long way off.” 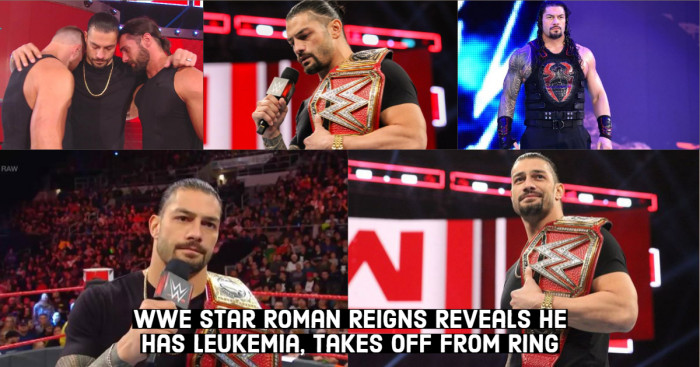 The WWE wrestler Roman Reigns declared he'll be taking time away from the ring to treat his leukemia (blood cancer). Although, the timeframe for his return is still out in the question. Meanwhile, Dave Meltzer, a prominent wrestling insider told the Wrestling Observer Newsletter that Roman has begun his treatment and also said his comeback date is a “long way off.”  Though, there is not a lot to report on that front.

A few weeks back on RAW (wrestling television program), the former WWE Universal champion had announced that he is suffering from leukemia. The expression saw him surrender the WWE Universal title and also withdrawing from the triple-threat match against Braun Strowman and Brock Lesnar who were there to defend the title.

He left everyone in the wrestling world in a state of shock. Also, he mentioned that he had battled and beaten leukemia 11 years ago also, but somehow, it has now returned.

And, now it is understood that as he fights to beat the disease once more, Reigns (real name Joe Anoa’i) will be sidelined for the foreseeable future.

He began to relish his title “Reigns” at WWE SummerSlam in August, as he defeated Brock Lesnar for the first time. Moreover, he had defended his title a few times, unlike Lesnar. And, one of which came the very next night after he won the title when he faced Finn Balor.

As per the schedule, on January 11, 2019, Reigns may appear at the 2019 ACE Comic-Con in Arizona, though we have no confirmation yet that he'll be making WWE appearances again or not.

Reigns, whose real name is Joe Anoa'i, said he remains optimistic in his second battle with the disease and plans on making a full recovery before returning to the squared circle.

In his announcement on WWE about the disease, Reigns said,

"When I was 22 years old I was diagnosed with this and very quickly I was able to put it in remission. "But I'm not going to lie, that was the hardest time of my life. I didn't have a job, I didn't have any money, I didn't have a home and I had a baby on the way. And football was done with me. But you want to know who gave me a chance? The team that gave me a chance was the WWE.
And when I finally made it to the main roster and was on the road they put me in front of all of you, the WWE Universe and to be honest y'all have made my dreams come true. And it didn't matter if you cheered me, it didn't matter if you booed me, you've always reacted to me and that is the most important thing. And for that I have to say thank you so much."

Also, he stated that he plans on making a full recovery before returning to the squared circle.

"It threw everything up in the air," Rollins said. "It's hard to go a day without thinking about him and how he's doing and hoping he's doing alright. I'm fighting the urge to check in on him like a brother every two hours, but he's a strong dude, and I know that he's in a good place mentally as well as physically. He's in good health for the most part. I think he's going to be able to fight this thing pretty strong. We're just getting through it while we can. Obviously it's going to be easier as time goes on, but certainly, the last couple weeks have been, and last week especially, have been a rollercoaster of emotions. Lots of ups and downs."

For several years, Reigns has served as one of WWE's top superstars and has been regarded by many as the heir to John Cena as the company's franchise player.

Besides the recent Universal championship reign, the third-generation superstar is also a former 3-time World Heavyweight, Tag Team, and Intercontinental, Universal champion and a member of the legendary Anoa'i family Samoan wrestling dynasty.

Justin Bieber's Journey with Depression and How He Met Hailey Baldwin