Almost everyone likes riding animals. But even the wild ones? Shocking, right? Yes, here is the list of people who not only rode these wild animals but also played with them or fed them. See the pics here! 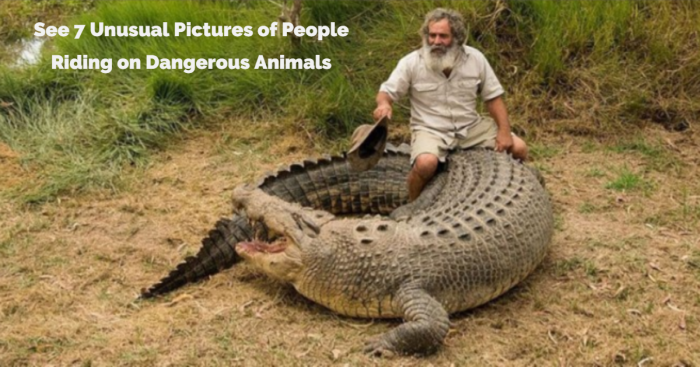 It is reported that 57 percent of consumers own pets globally. That implies, more than 50% of humans are in love with animals. But the shocking fact is, this not only includes dogs or cats but also includes alligators or bears.

You also felt shocked, right? But it is true. Look at these unusual photographs of the brave people riding dangerous animals. 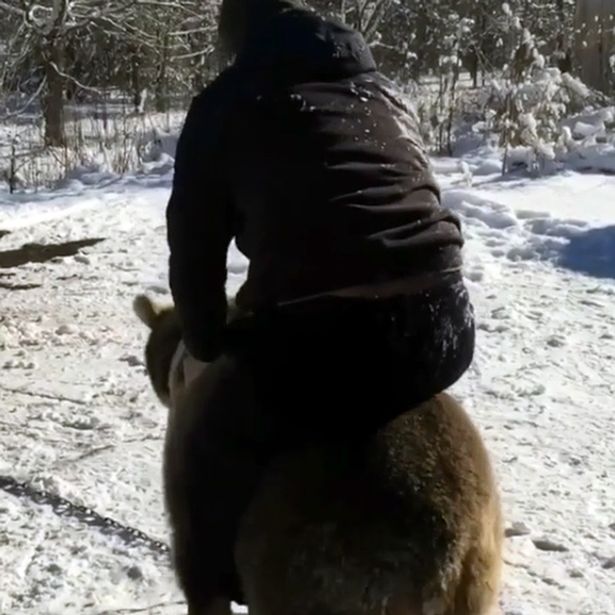 This unusual picture shows a wrestling fan riding a huge bear. The guy adopted the bear as a cub a year ago after finding it abandoned in the woods.

The way they grapple together in the snow shows that there is genuine affection between man and the beast. 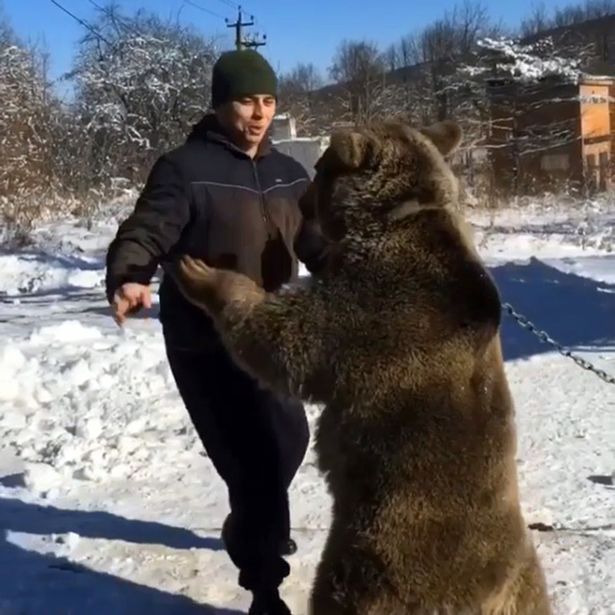 In an interview, the man said that the bear, which is now one year & seven months old, is part of his family now. He said-

"We found her in the bushes when she was two or three months old and have been taking care of her ever since.
We now keep her at our friends' place but we visit her all of the time."

"We don't give her any meat as we are afraid that she might become more aggressive if we do that."

The man is worried about the bear being stolen for a zoo or a circus; hence, he did not reveal his name or address in public.

2. Ride of an Ostrich 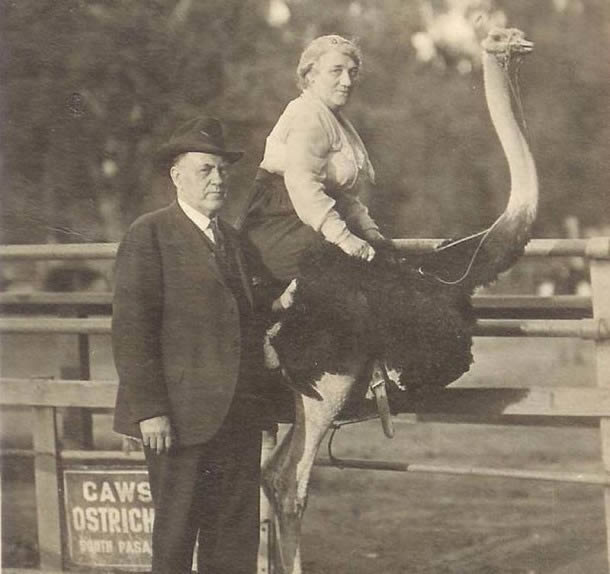 This is an old picture as this belongs to history. A picture from Cawston Ostrich Farm was opened in 1886 by Edwin Cawston, which was located in Pasadena, California. Located in the Arroyo Seco Valley just three miles (5 km) north of downtown LA, it was America's first ostrich farm and occupied nine acres.

For many years, it was a premier tourist attraction. In this farm, people were allowed to ride ostriches, and also able to buy ostrich-feather hats, capes, boas, and fans at the gift shop store were connected to the factory. Well, this farm was closed long back, i.e., in 1935.

Well, the good news is even now also one can ride the ostrich. Want to know where?

Here we are talking about the town of Oudtshoorn in the Karoo, located in South Africa. Several farms raise ostriches for their meat, feathers, eggs, and leather. These farms allow people to ride on the back of the big, flightless birds for not only a wild but also a memorable ride around the corral. An ostrich's wings sure are handy to hold onto when you ride one even if they are not so good for flight. 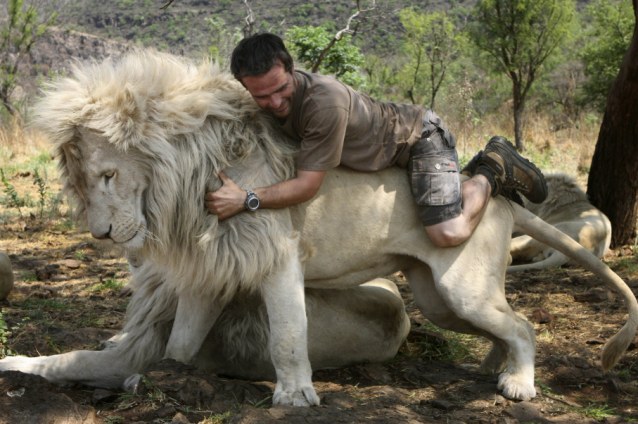 Maybe this picture of the man snuggling up to a fully grown male lion seems foolish enough to you because climb on its back is nothing less than suicide.

The 34-year-old claimed that he and the fearsome beast, the lion, shares such a profound bond that he can even spend the night curled up with them.

The animal-behavior consultant runs a conservation park near Johannesburg in South Africa where he also keeps cheetahs, hyenas, and leopards.

He also mentions that he befriends the animals by treating them with ‘love and respect or talking to them’ to the extent that they consider him part of their pride. 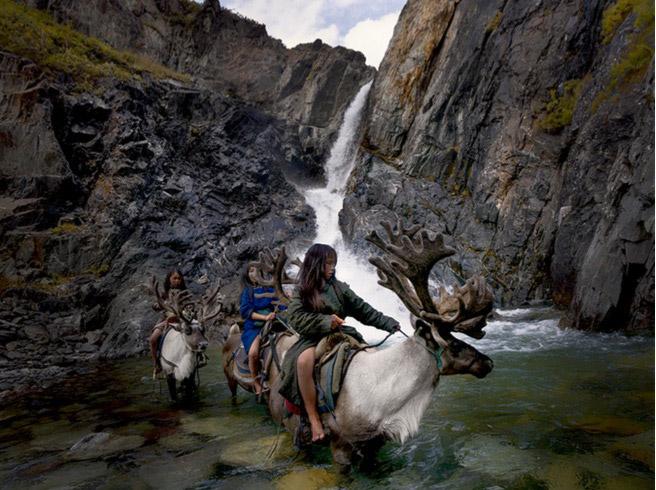 The Mongolian people Dukha are truly fascinating. The nomadic tribe developed an utterly amazing relationship with wild animals, who have lived in the region for centuries. Recently, photographer Hamid Sardar-Afkhami documented this relationship in photographs.

The Dukha, over the treacherous terrain they call home, have learned to use reindeer as a means of transportation through their brand of animal husbandry.

Photographer and filmmaker Hamid Sardar-Afkhami moved to northern Mongolia to photograph the everyday lives of Dukha, the nomadic people. Another striking fact is, the main source of income of the Dukha people are the tourists who visit the Dukha lands to buy their crafts as well as to ride their reindeer. Hence, in this way, many people there ride reindeer. 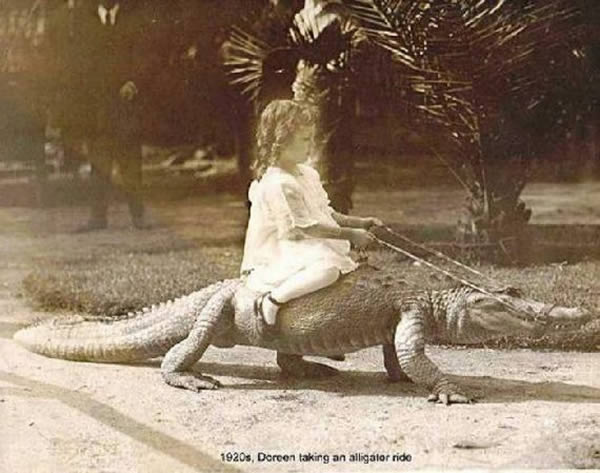 It might be hard to believe, but the picture is true. There was a very unusual place known as the California Alligator Farm before Disneyland existed. And, it was a facility there that people were allowed to visit, ride, and feed some live alligators for just 25 cents. 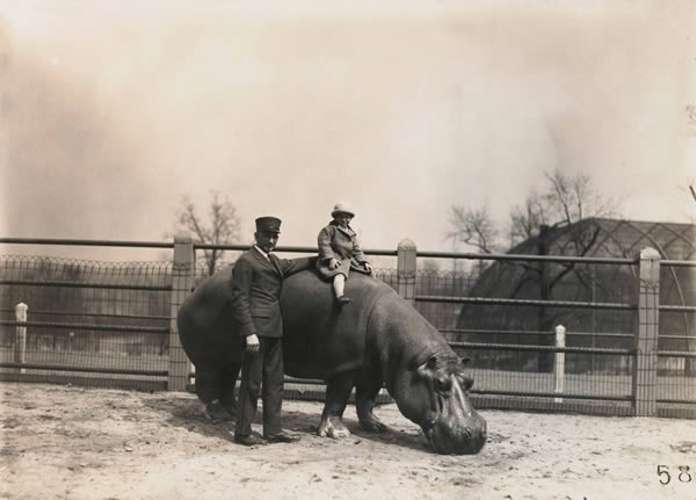 This picture is also quite shocking. And, quite old as well. It is of a zookeeper and a young kid, who is a visitor, riding a hippopotamus at the St. Louis Zoo in the early 20th century.

7. A Ride on a Rhinoceros 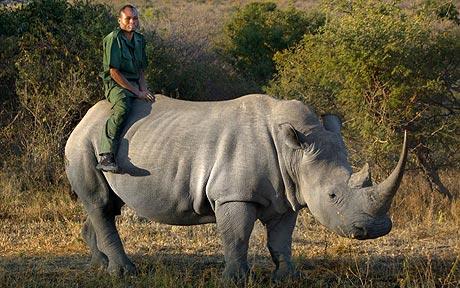 Here you can see a 12-year-old bull rhino named Dennis, who recently has become best buddies with game warden James Ndlovu. It happened after the animal was critically injured in a fight with another rhino. The rhino began to form an extraordinary friendship with James, aged 32, after 17 months of rehab.

As we all know, rhinos are well-known for being decidedly grumpy and turn extremely vicious and dangerous if disturbed. But incredibly, James and this wild animal formed such a strong bond that rhino even now allows him to ride around on his back.

And, as the pair explore the Moholoholo reserve in the Limpopo province of South Africa, James can "steer" Dennis with his legs.

Reserve Manager Colin Patrick once said in an interview,

"One day James turned to me and said, 'I'm going to ride that rhino' - I couldn't believe my ears.
I thought Dennis would end up killing him - this is a wild rhino, a very dangerous animal, very territorial, very powerful.”

“James has been riding Dennis for four or five years now and is now up to the point where he can even steer which direction Dennis walks by leaning left and right."

No doubt, riding such dangerous animals is equally dangerous. But many people do it anyway. However, there is always some connection between them because no random person can ride any animal out of anywhere.

Even if you want, we warn you don’t do it as it is highly risky. So, enjoy these stories of people that how they accomplished such highly hazardous tasks!