These People Built Their Dogs Their Very Own Home-Cum-Mansions

People do a lot when it comes to love. And, nothing changes even when the love is for dogs. These stories tell the same. Let’s know the stories of a woman & a man who built their pups their very own mansions. 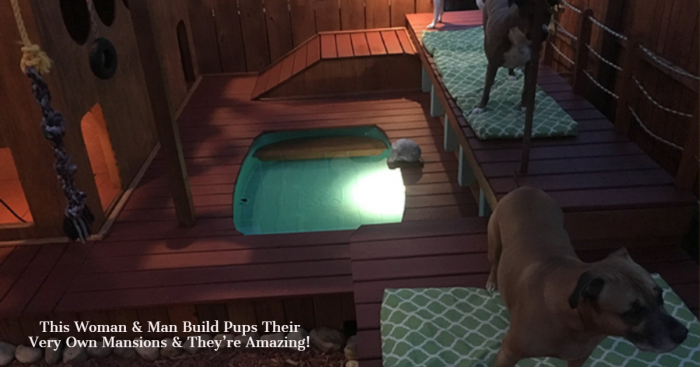 Dogs are the most adorable creation, and according to reports, around 74 percent of people like dogs a lot. Yes, the ratio of dog people is much higher. And, that is not it. Around 60.2% of U.S. households own a dog; that is quite a huge number!

The best thing about dog lovers is, without even thinking about the limits, they do a lot for them. And, this California woman Victoria Palmer and Pennsylvania man Aaron Frank are such great examples of it. Yes, the story of such people recently came up, which shows how much they love their pups.

So, let’s know stories of both one by one:

A Woman Made a Luxurious Backyard Mansion for Her Pups 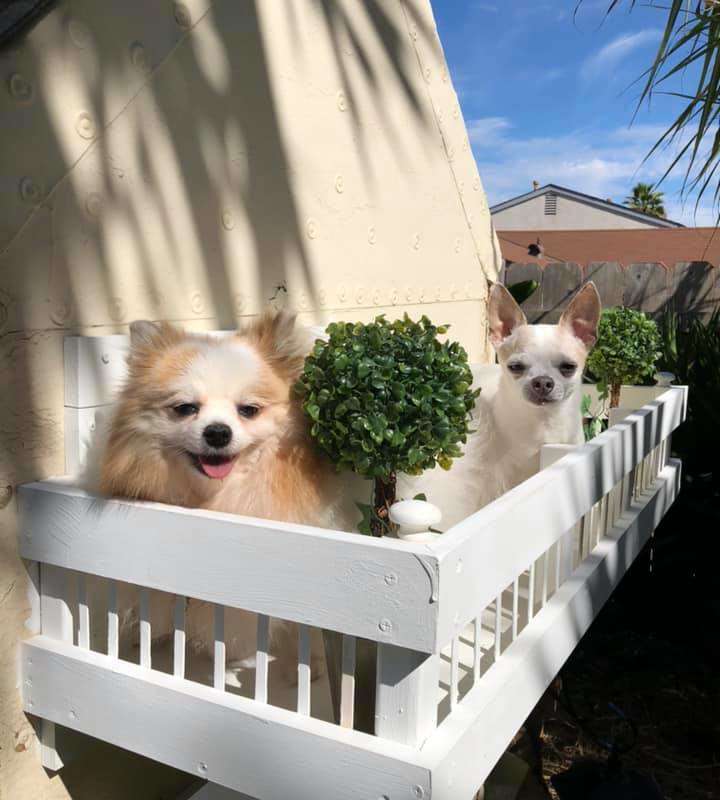 California woman Victoria Palmer came up with a genius way; she made an ultimate doggy dream house for her pups.

In an interview with The Dodo, Victoria told,

“My dogs Bruiser the Chihuahua, Marvin the shepherd mix, and The Fuzz my Pomeranian have given me the insurmountable gifts of love, comfort, companionship [and] joy.
So this was one way I could do something for them.”

How She Came Up with the Idea of “Barkingham Palace?” 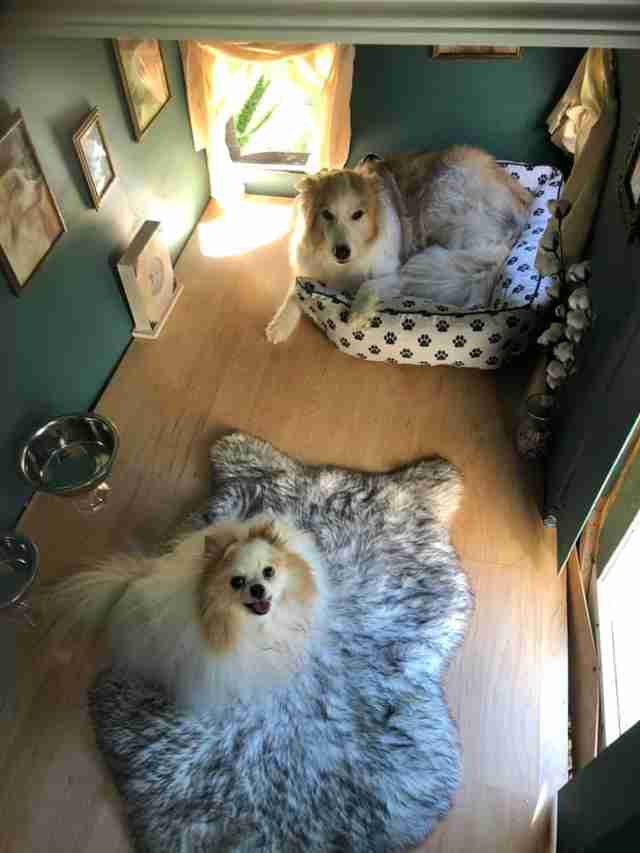 Earlier once when Palmer tore down an old shed in her backyard, this backyard Mansion’s inspiration first struck at that time. And, soon the trash was cleared away, all that remained of the building was its concrete footprint.

Palmer immediately recognized  that it was just the right size to act as a foundation for her pups' future home, which she further named "Barkingham Palace."

As Victoria started to map out the home, the outline grew and grew. She said,

“My father and I love to do home improvement projects and add things to the house when he comes to town."

"I mentioned building a doghouse for his grandpups and the next thing you know we're framing doors and windows and drawing up plans for the second floor, buying shingles, and we reached 'carried away level 1000.'" 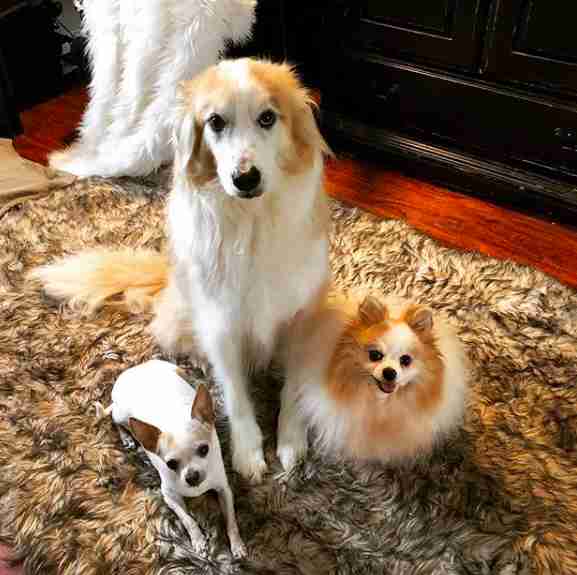 However, soon Palmer's father left, so now it was only her work to complete the house. She said in the interview that she worked each day for weeks until the sun went down, educating herself each new skill, from roofing to framing, adding moldings, flooring, and much more.

And, ultimately, the moment came where she decorated the palatial home. Victoria knew she wanted it to reflect her refined style, a grand staircase, complete with charming balconies, window boxes, and classic Victorian details.

“The portraits up the grand staircase were planned from the beginning because it’s part of that classical manor house style to have regal portraits of all the important people on the walls.”

See What Happened When Project Got Completed 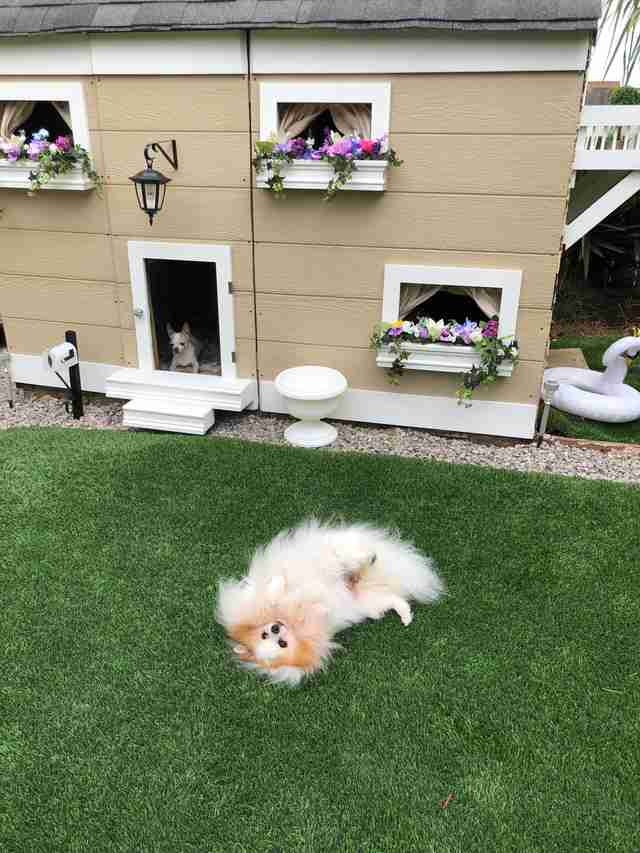 In this way, she completed the entire project. The perfect little two-story house has gone to the dogs — literally.

"Bruiser does not come out of it."

"He’s mastered the stairs and likes to peek out the little window. I have to demand he come over to my house now because he is always locked down in his house like a
little hermit."

And, this way the three pups are now the proud owners of real estate in the San Francisco Bay area. Well, they couldn't be much happier.

Aaron Franks Made an Elaborate Home for His Dogs 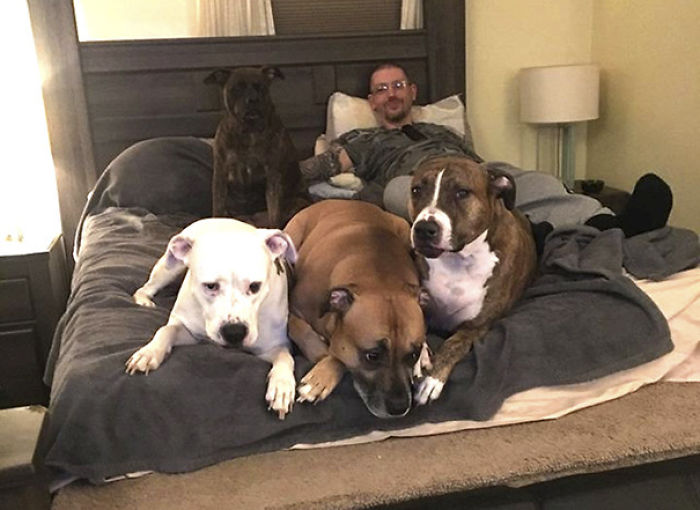 Another similar story we found in which a person named Aaron Franks took to his Facebook account and posted that he had spent two years constructing an elaborate home for his dogs.

Aaron Franks, a man from Pennsylvania, puts everything luxurious in his dogs’ home what one human looks for. Yes, the mansion is equipped with running water, an in-ground pool, working electricity, security cameras, a fire hydrant, an indoor staircase, and even a pirate ship wheel for some reason.

No wonder, Aaron is one very creative man who turned his backyard into the lavish mansion for his four beloved dogs- Tessa, Bruno, Cooper, and Mia.

In an interview with The Dodo, he told,

“I feed them, I water them and walk them every day. They get their exercise and stuff, but I guess at the end of the day I just felt like it wasn’t enough.
I felt like this would be a good way to show my love for them. It makes me feel good that I could do that for them.”

“I worked on it a little bit at a time, sometimes just a few boards a month. Every time I got a couple of extra bucks, I’d go out there and add to it.”

He told the story of how it felt after the mansion completed. Yes, the playground has three layers, a pirate-themed pool for the canines to enjoy, and lots of fun things to do. Oh, the whole thing lights up in the evening.

“They love it.
My two older dogs lay around and hang out. They’ve got some new views now where they can see over the fence. For the two youngest, it’s like a romp room. They go down there jumping and playing around, swinging on the swings. It’s pretty cool.” 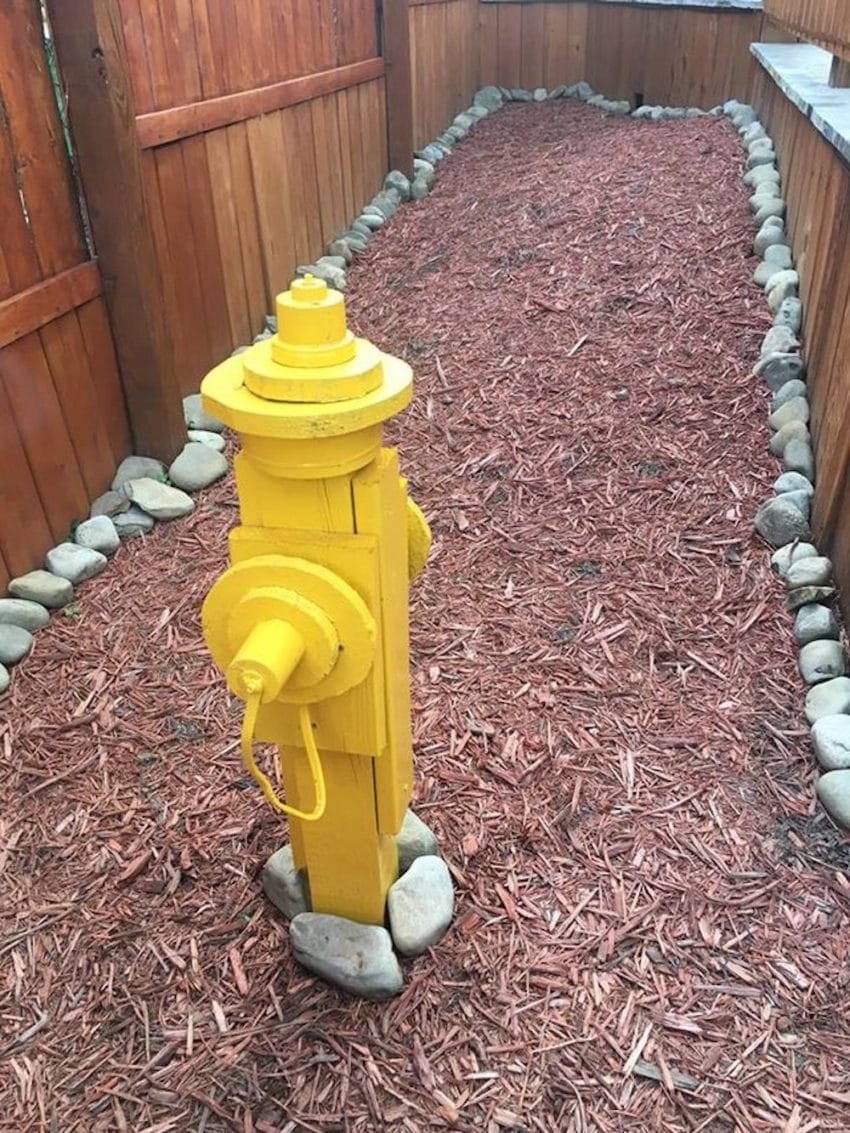 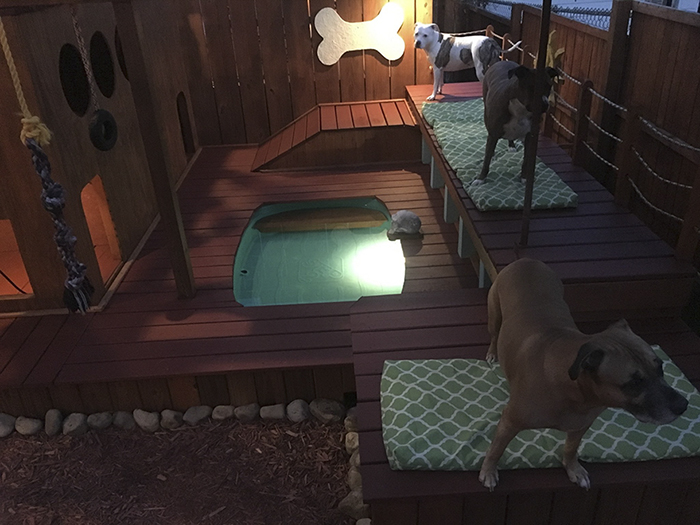 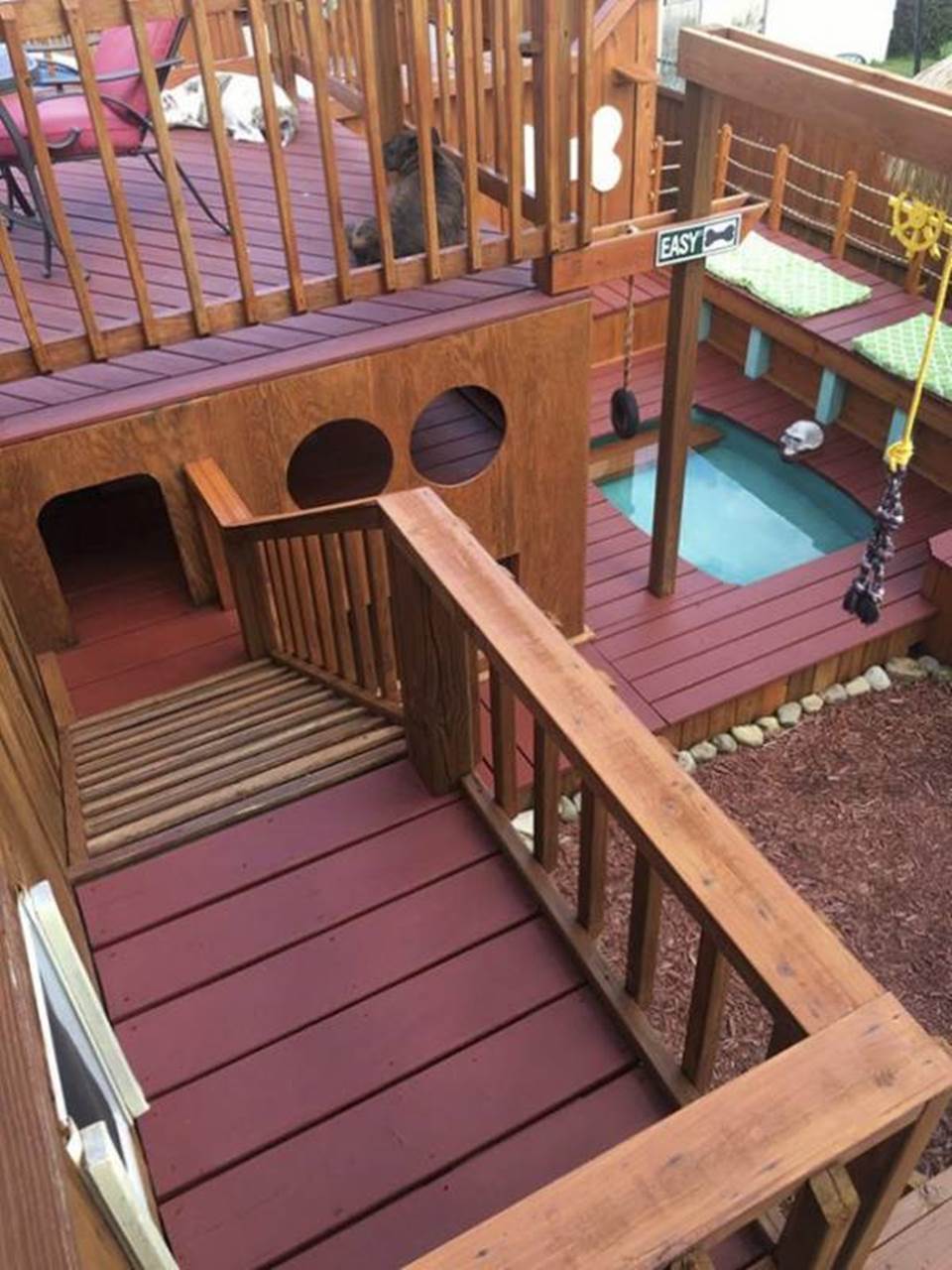 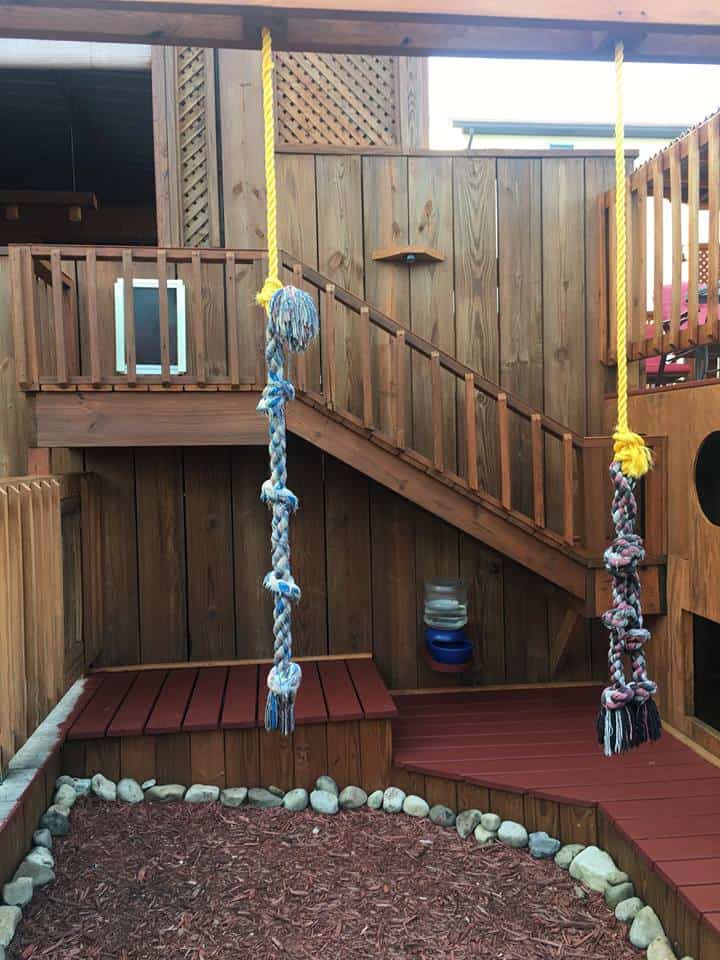 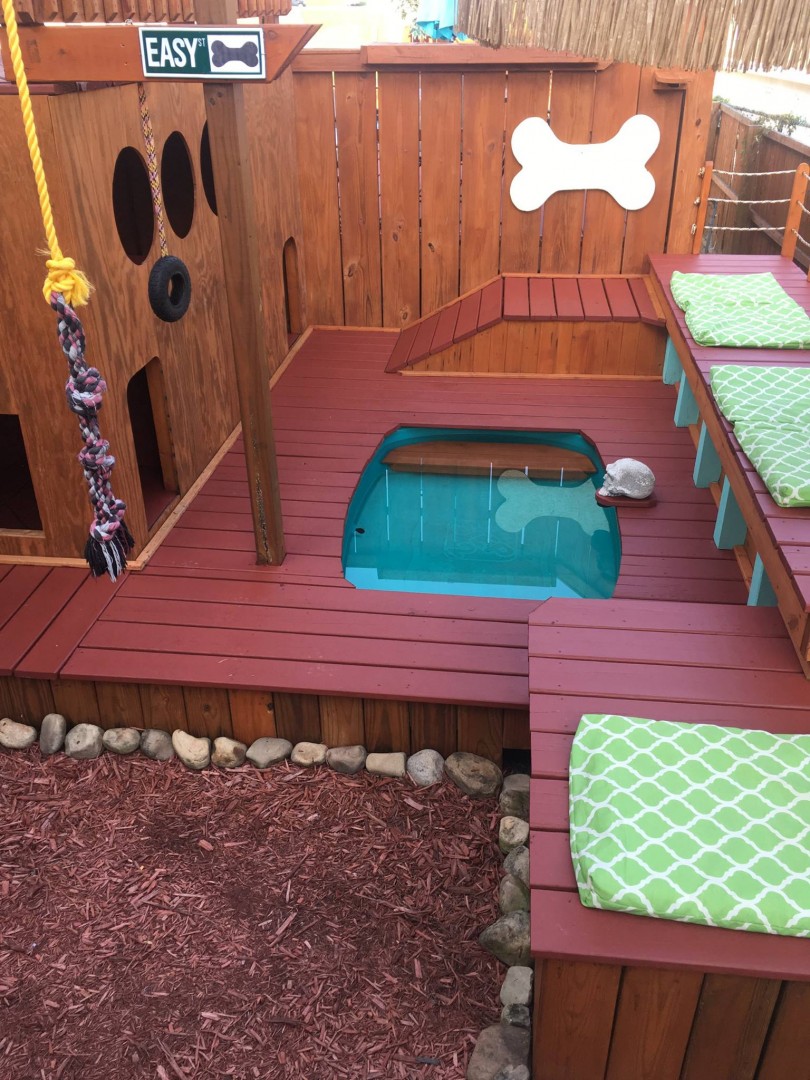 Don’t the stories of Victoria Palmer & Aaron Franks, what they have done for their dogs, inspire all to not only love the animals unconditionally but beyond any limits?
Inspiring Enough!