Recently, news about inscribing names on rhino's back in the zoo shocked everyone. This incident happened in a French zoo where a few visitors inscribed their names with fingernails. 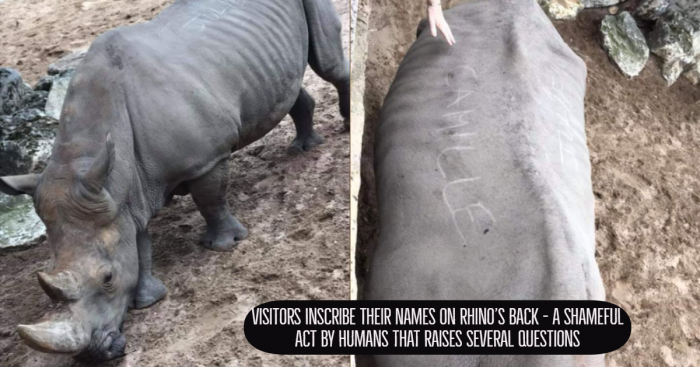 While some find wild animals adorable and wish to own them as pets, others show their stupidity by attacking them. An incident that happened in a French Zoo, La Palmyre, has reported about human behavior against animals.

This popular zoo in southwestern France welcomes over 70,000 visitors every year and has nearly 1600 animals. The visitors here experience the diversity of animals and are also allowed to touch some animals.

Recently, a few visitors in the zoo scratched their names on the Rhino’s back with their fingernails, and this shocked people. Some shocking and offensive photographs shared on social networks showed the back of a 35-year-old Rhino with the names inscribed.

Another example why zoos and circuses with animals should go. Imbeciles in a French Zoo in La Palmyre carved their names in the skin of a Rhino. Only in zoos a Rhino can be approached as if it was a domesticated animal. pic.twitter.com/GpFrGMuNkQ 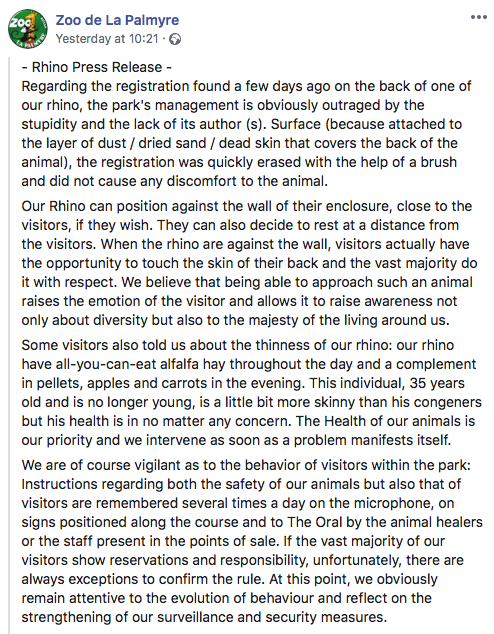 The park said it wouldn’t be taking action against these offenders, but they condemned the visitors with a post on Facebook. In the post, the management said they are outraged by the disrespect of the culprits, and it should be understood that when the Rhinos are standing against the wall, the visitors can touch their skin but with respect.

“Our Rhino can position against the wall of their enclosure, close to the visitors, if they wish. They can also decide to rest at a distance from the visitors. When the rhino are against the wall, visitors actually have the opportunity to touch the skin of their back and the vast majority do it with respect. We believe that being able to approach such an animal raises the emotion of the visitor and allows it to raise awareness not only about diversity but also to the majesty of the living around us.”

The rhino called Noelle is unharmed, and the names were removed by brushing its back. But the management is now considering installing CCTV surveillance for future events. Poaching has diminished rhino population, and there are only 30,000 rhinos left alive. 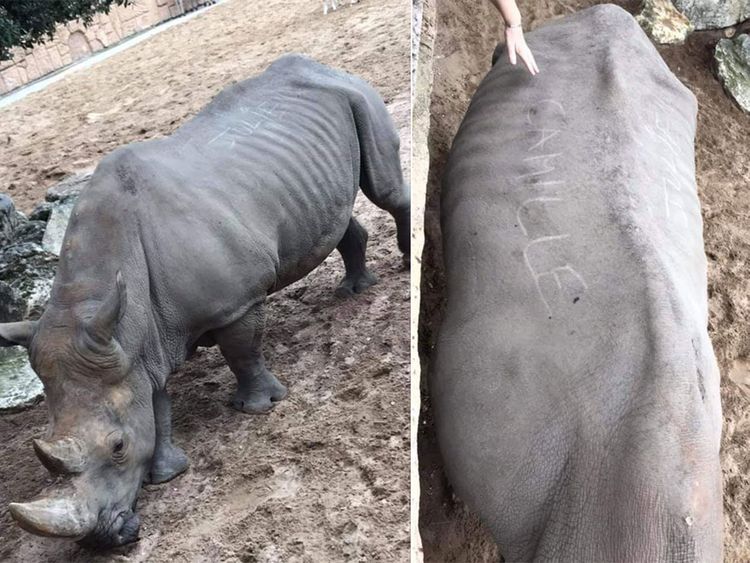 The staff discovered that names ‘Camille’ and ‘Julien’ were scratched on the back of the Rhino. It appeared that the visitors used their fingernails to inscribe the names. The zoo management is not taking action as no discomfort was caused to the animal. The names were written on the Rhinos’ back over the layer of dust and skin. There were removed by the brush.

The photos of this incident went viral on the internet. Social media users wrote -

“When will people stop being so irresponsible and imprudent. This is really disgraceful.”

“Highly disgraceful behavior, such people should be banned from entering Zoo for life.”

Some even commented about the Rhino’s health, but the management reassured that it is fed properly and in good health.

“Our rhino have all-you-can-eat alfalfa hay throughout the day and a complement in pellets, apples and carrots in the evening. This individual, 35 years old and is no longer young, is a little bit more skinny than his congeners but his health is in no matter any concern. The Health of our animals is our priority and we intervene as soon as a problem manifests itself.” 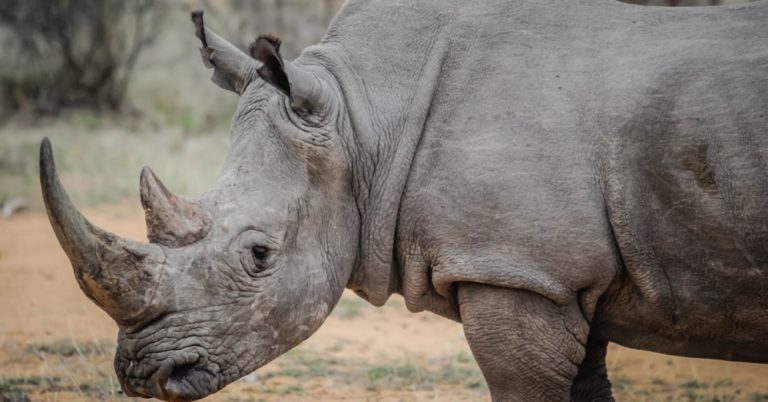 Also, white rhinos are estimated to be around 20,000 left in the world. Do you know why they are called white rhinos? They are not called white because of their color but due to mistranslation. They are known as wide lipped or square rhino, and the name white comes from the word WIDE.

Northern white Rhinos are a threatened species, and this brave group of rangers is working towards the protection of the remaining white rhinoceros in the world. What do you think could be the reason behind setting them as a target? According to experts, a rhino horn is more lucrative than drugs, and this could be the main reason for poaching.

Not only Rhinos, but all the animals deserve to be treated with respect. The management team has now started planning for the strengthening of surveillance and security measures.

I feel surprised sometimes, how people can do this to animals. We should be treating each animal with love and respect.

Do you know any other incident that made you think about such shameful human behavior? How was your reaction? Other than raising voice against these kinds of people, what are the other ways you can take to help animals? Drop your comments below.