First Live Observation Of Ruby Seadragon In Its Natural Habitat

A hard to find ruby seadragon has been seen in its natural habitation for the very first time. It was earlier known only throug... 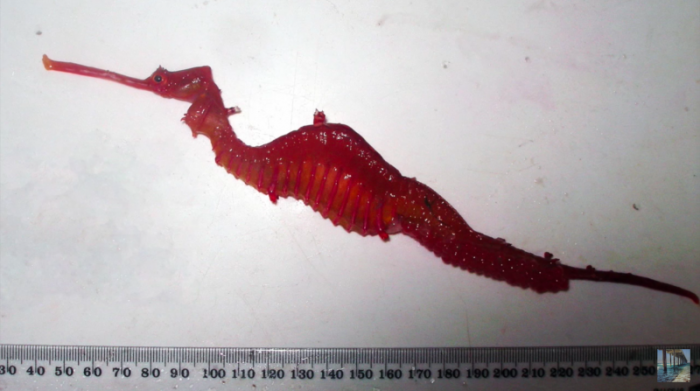 A hard to find ruby seadragon has been seen in its natural habitation for the very first time. It was earlier known only through its museum specimens.

In 2015, a scarlet-hued fish ‘Phyllopteryx dewysea’ (ruby seadragon itself) was discovered for the first time as a different species. When the researchers were studying about a two already known seadragon species (the orange-tinted leafy seadragon and the yellow-and-purple common seadragon), they found a misidentified preserved specimen of ruby seadragon. And since the time it was discovered, the scientists have been searching for this 9.4-inch (24 cm) long rare species.

Recently, two ruby seadragons were recorded in a video by a team of researchers for approximately half an hour in the waters of isle Recherche Archipelago in Western Australia.

One of the four preserved specimens used for identifying the rare species. 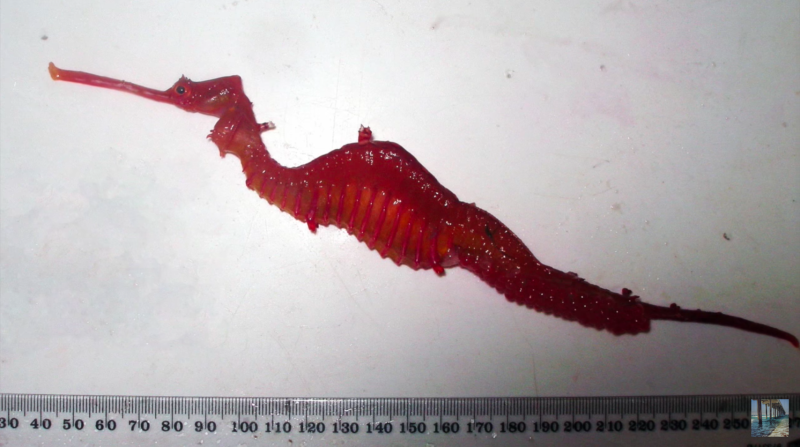 The researchers had to wait days to this elusive seadragon. They used a small remotely operated vehicle (ROV) greater than 160 feet (50 meters) deep. This has resulted in a deeper understanding of the unique species' anatomy, habitat, and behavior.

Apart from the unique scarlet color of the ruby seadragon, it is different from the other two sea dragons due to the absence of leaf-like appendages.

"It was really quite an amazing moment. It never occurred to me that a seadragon could lack appendages because they are characterized by their beautiful camouflage leaves."

Josefin Stiller is also the co-author of the new findings.

According to the scientists, the ruby seadragon may have lost its appendages because of evolution. Also, its habitat is found to be much deeper and deserted as compared to its cousins. The scarlet red ruby color, is likely a trait of evolution, as camouflage in the much deeper, faintly lit waters.

Furthermore, the researchers also found a prehensile tail in the seadragon, like that of a seahorse but not like other seadragon species. Additional research on the species is required to find out what led to the evolution of this prehensile tail.

The latest research on ruby sea dragons was published online four days back i.e. on  Jan 13 in the Marine Biodiversity Records journal.